From love to loss

Whenever I find myself growing grim about the mouth; whenever it is a damp, drizzly November in my soul; whenever I find myself involuntarily pausing before coffin warehouses, and bringing up the rear of every funeral I meet; and especially whenever my hypos get such an upper hand of me, that it requires a strong moral principle to prevent me from deliberately stepping into the street, and methodically knocking people's hats off - then, I account it high time to get to sea as soon as I can.

As 70 percent water, human bodies have a lot in common with bodies of water. We’re also both moody with a range of emotions from calm to volatile.

Every time I’ve communed with her (the lake is a lady, right?) there was at least one other person doing the same thing. Sitting in their car or on the rocks – staring at the infinite pool of sparkles or pale blueness or bands of different colors stacked to the sky.

In 2013, my partner took a picture of Lake Michigan every day. We’d often describe it as "gleen" if it was more green than blue or "glue" if it was more blue than green. One afternoon it would be brownish and bland, the next sapphire blue. Every day – every single day – it looked different.

But whether it was super wavy or serene as sand, there’s always something soothing and reassuring about our Great Lake. Our Great Listener.

"I always say about life in Milwaukee, my day will always have one assuredly and content moment, and that is the moment that I set eyes on magnificent Lake Michigan," says Amy Taylor.

Here are other Milwaukeeans' lake stories.

"I was a longshoreman for 10 years from 1980 to 1990. I worked in salt storage and created the salt piles you see from the Hoan Bridge. To this day I can look at salt and tell you what mine it’s from. I’ll say, ‘that’s from the Cleveland mine because of the shale count.’ Anyway, my job was to shovel the salt from the ship to land. The peak season for salt is the winter time, because of the amount of salt needed for roads.

The second time I ever unloaded a ship, there was a huge storm. The waves were 14 to 17 feet high. You could hear the violence in the lake. It was brutal. I was standing on top of the roof of the warehouse and the wind was blowing so intensely. The rain turned to ice and snow. Five hours in, I’m still shoveling salt, and a transformer explodes. A piece of it hits me in the back of the head. My ears are ringing. All the power goes out in the warehouse. My lead man also got hit in the head with a piece of the transformer. We were shocked but not seriously injured. It was 3 or 4 in the morning and we had hours of work ahead of us, but the captain from the ship yelled over to us, ‘You fellas OK? Wanna come on board and have a little grub until this storm kinda rides over?" We eventually worked a 19-hour shift unloading the salt, but first we ate a really great breakfast on board."

"When we were kids, my dad impressed us like crazy. Once he swam out to the breakwater with a Sharpie and wrote my mom’s name on one of the rocks."

"I remember watching the ‘submarine races’ at North Point in Sheboygan back in high school. And then the cops show up, tapped on the window and asked, ‘Is everything OK in there?’ Well, ossifer, it was until you showed up."

"I have ‘Polar Bear’ plunged for 10 years into the Lake on New Year’s Day – including the year after I was hit by a motorcyclist and was seriously injured. I always think of it as a purge of the last year, as leaving the past in the lake. Recently, I plunged on a private beach, naked. It felt more primal."

"I grew up across the street from the lake in Algoma. I am told that I almost drowned in the lake when I was three and a teenager rescued me. I have a vague memory of breathing water and thinking it was strange that I was breathing water. Ever since, I have felt a need to be near the lake. In my teens I counted the waves when I needed quiet. I have ‘ridden’ ice chunks and walked out on piers with waves crashing over me as my risky teen behavior. I would regularly swim out to the fishing nets to see the catch. Perhaps I was a bit too confident. Where were my parents? But my favorite memory from my childhood on the lake is smelting season. The beach would be lined with little fires. The fishers would wade out with one on each end of a large net. They would pull in the fish and fry them up. What a delicious, romantic, small town ritual."

"I have always loved the lake. I used to drive my kids across town just to go to South Shore Park. I planned a surprise baby shower here for a dear friend who lives in Cleveland. I took the ferry across the lake with my kids and it was magic. Lastly, I got married on the lake and that was magical, too."

"I remember as a kid going smelting down by the Summerfest piers with my dad and his tavern buddies. One time I was sitting in a big camper eating whatever we grilled up that night and I accidentally put the camper into neutral. It started to roll forward – with people in front of it fishing. I froze but someone jumped over and put it back in park. Now every time I eat smelt, which isn't often, I think of that night by the lake and my dad."

"I remember going down to the lakefront when it was freaking hot at night and lying on the concrete rocks, naked, to try to cool off as close to the water as possible without being IN the water."

"My earliest memories of Bradford and McKinley beaches are with my parents and their friends. In the 60s and 70s it was full of hippies, dogs, Frisbees, guitars, alewives and smelly seaweed. We walked right through the muck and we would try – and fail – to touch the Love Rock. When I was 9 we moved to Bradford Avenue and the lakefront became our playground. We could see the water tower glowing from our bedroom window. My mom would tuck us in and tell us it was a fairy castle – specifically the tooth fairy’s castle and that it shined because it was made out of polished teeth. She polished all the teeth it was made out of every night before getting more. In high school, we used to tell my mom we were watching the sun rise and she thought we were being naughty, but we really were down at Bradford lying on the beach watching what are the most beautiful sunrises in the world. Lake Michigan is my zen. My peace. My past, present and future."

"In the '80s we shared a cabin in Michigan, on Lake Michigan, with another family. One lazy afternoon my father set out from the craggy shore on a cheap inflatable raft. He quickly drifted out of consciousness and from view. For several hours he was missing, creating great alarm for both families. Then right before dinner, down the gravel road, carrying the limp remains of his raft, my dad appeared. He told the tale of awaking on the raft, realizing he had drifted and exiting the beach to the road only to find the more he walked the farther he had gone on his unexpected journey. Dad ate like a long lost seaman that night and the Mark Twain-esque twinkle in his eye eluded to his fun in being ‘lost on the lake.’"

"People have said to me over the years ‘blacks don’t surf,’ but I never bought into it. I lived in Hawaii in the mid-90s, doing an internship at a hospital. While there, I started surfing and I continued surfing when I moved back to the Midwest.

Surfing on Lake Michigan is finicky – it really depends on the wind and wind direction. It’s funny, because when people start to get concerned about the weather – when there are weather advisories – that’s when local surfers start to get excited about getting in the water. I surf year ‘round – the winter months are best – anywhere from Sheboygan to Racine.

About two years ago, two young black kids asked me about my surf board and I said, ‘get on!’ They loved it and wanted to ride wave after wave. I realized it took one second to break a stereotype; to break out of the roles we think we have to live by. I don’t know if those boys will ever be on a surfboard again, but I know they will never forget that experience.

I plan to teach kids of color to surf this summer, in conjunction with Surf Atwater, which is Aug. 19. Surfing is the hardest thing I’ve ever learned to do. It’s completely unstable, but once you get it it’s such an accomplishment."

"Ronald Guenther was my brother. Ronnie came back from Vietnam, got married – I was best man – and his wife got pregnant with twins. In 1973, he was fishing on a boat with his father-in-law and another guy and a storm came and all three went down with the boat. They never found my brother’s body but we legally declared him dead eventually. His wife named the twins after her husband and father, both drowned in the lake. Ronnie survived ‘Nam but then he went fishing and died. That's crap isn’t it?"

"The lake has always been my touchstone. When I'm here I always know which direction I'm headed because I always know where the lake is. When I'm away, I'm always lost. My husband and I courted along the lake. We got married overlooking the lake. It more than anything is what my hometown is about. The skyline changes, neighborhoods change, restaurants come and go, the lake is as solid as a rock. And there is nothing in this world – and I've seen a lot of the world – that compares to the big ol' moon rising on the lake. I think when I die, hopefully many years from now, I want it to be the last thing I see." 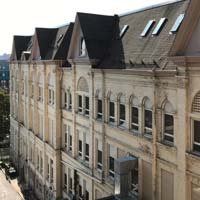 Made in Milwaukee: Summerfest