The future of 3-D printing is now at Kohl's Design It! Lab

The Kohl's Design It! Lab - and its offshoot Mobile lab, designed to visit schools and community events - were born from the 2010 Kohl's Cares initiative connecting Kohl's and Discovery World. Now, students are able to learn about the booming, cutting-edge technologies of 3D printing, and the value of educating kids about 3D printing is clear to the people who operate the lab.

A girl about age 9 looks curiously at her digital reflection at a photo booth in front of the Kohl's Design It! Lab at Discovery World. Her mother stands behind her smiling affectionately as two Kohl's associates guide the young girl through the process.

It's a simple snapshot of her face, but that snapshot will be carefully analyzed and then digitized by the booth. Using a blend of software, the photo will be broken down to a complex series of numbers and equations that describe every inch of her face. A 3-D printing machine to the right of the girl will then be instructed by those equations to create a detailed replica of this young girl's face.

All of this will happen in only a matter of minutes.

That's the basis for Kohl's Design It! Lab. The exhibit’s goal is to encourage kids to play and learn about one of the world's most engaging new technologies: 3-D printers.

The Kohl's Design It! Lab, and its offshoot Mobile lab, which visits schools and community events, were born from the 2010 Kohl's Cares initiative connecting Kohl's and Discovery World. Now, students are able to learn about the booming, cutting-edge science of 3-D printing, and the value of educating kids about 3-D printing is clear to the people who operate the lab. The process is naturally engaging, the end product is real and children at the Design It! Lab are able to take home their creation as soon as it cools off.

"You can touch it, you can feel it, you can see it, it's in front of you," said Justin Doll, design strategist and manager of the Kohl's Design It! Lab. "Unlike when you're creating renderings for video games or creating animations for movies, it's all stuck in the screen, but with 3-D printing and laser cutting, you're making something real."

The hands-on approach allows kids to explore every facet of the 3-D printing process. They design their own products, see the computer code that describe their models and then watch the printing unfold in front of them.

"All of our experiences have the opportunity for an individual to make something," Doll said. "We feel that not only is it important to educate someone but also to engage them in a physical activity, using their hands and using technology provides the next level of experience, the next level of learning and problem solving."

Joel Brennan, Discovery World CEO, sums up the technologies nicely. "As 3-D printing becomes more valuable to human existence, so does the public's need to fully understand how they can harness this booming industry," Brennan said in a previous statement. "The Kohl's Design It! Lab 3-D Printing Experience is a perfect chance to learn more about the processes of today and the opportunities that exist in the future."

But what are these technologies, how are they being used now and how will they be used in the future? Why is teaching kids about 3-D printing valuable?

Inside the Kohl's Design It! Lab, a child's shoe sits on a table. It is in the popular low-cut canvas style, but it has a plastic, synthetic feel to the touch. The colorful design and the small size suggests that a happy young girl may one day lace it up before walking to her first day of classes, Yet this shoe was printed in a 3-D printer. 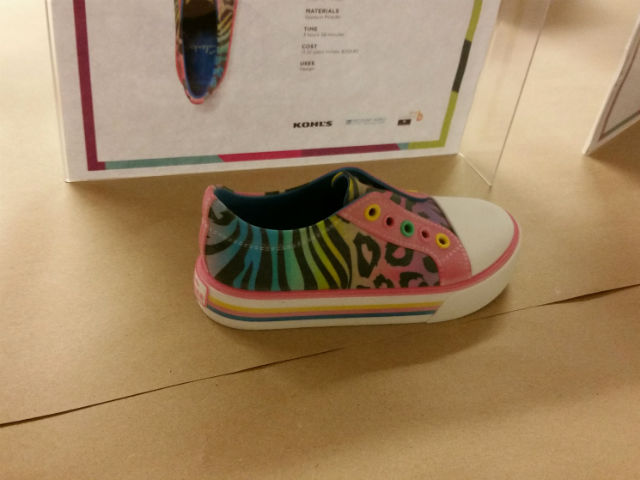 This is just one of the many emerging applications of 3-D printing. Most likely, the shoe is just a prototype for a real canvas shoe that Kohl's could market later, but in the future it's possible that the shoes, along with many of our everyday goods, will be simply printed at home.

Imagine having a 3-D printer sitting in your kitchen next to your microwave. This particular printer is specially designed with code and ingredients for molecular gastronomy. It slowly applies thin layers of different proteins, dehydrated starches, water, salts and seasonings to make your dinner. It then spits out a combination of cocoa, milk and sugar to create a hot cocoa beverage. The other 3-D printer in your kitchen conveniently creates a plastic spoon to stir your drink and eat your dinner with.

Or say a company builds a massive printer, bigger than a house. Configure it to use concrete and wheel it onto the construction site. If the code tells the machine to lay cement in a specific, detailed pattern, is it impossible to effectively "3-D print" a small house using this technology? Or let us explore the biomedical realm: a brain surgeon looks at an MRI – would a color-coded, 3-D-printed brain scan be able to tell the surgeon more about a patient's migraines?

Printing food, buildings and brain images may sound like stories out of a science fiction novel, but all of these applications are already being explored using 3-D printing technologies. In fact, all of them have already been done. Brain scans and ultrasound of fetuses can be printed. In February, a five-story 3-D printed mansion earned coverage by the Washington Post. And Hershey's, for example, is already 3-D printing chocolate confections personalized for special occasions. Scientists and engineers are even looking into printing organs with living tissue for organ transplants.

3-D printing is often referred to as "additive manufacturing" (AM). Early AM processes developed in the 1980s used plastic polymers that hardened when exposed to ultraviolet light. These photo-polymers would be added in thin layers using the UV light to slowly build up models.

Eventually, two other common AM methods developed: fused deposition modeling and another using granular materials. The first technique employs an inkjet-like process that deposits fine filaments of molten material designed to bind and harden as soon as it is extruded from the inkjet nozzle. The second method lays down a layer of granular material, then applies a layer of chemical reagents or adhesives to bind the granules to carefully craft the model – a process known as sintering.

These processes are guided by digital files which take the model you see on a computer screen, mathematically dissect it and instruct the printer to precisely recreate it in the real world. Many 3-D printers use the STL file format (STereoLithography), though companies are constantly pushing new file formats for more specialized purposes.

But the real excitement surrounding these new technologies is finding innovative applications. People are racing to use these technologies for both special occasions and mass production.

Luke Hellwig works at DOOB 3D in New York City. On an average day at his workplace, a recently engaged couple might walk in to the store and step into a photo booth, where 40 cameras capture the fiancées from every different angle to produce a 360 degree portrait. The high resolution images are then processed in Europe using proprietary computer programs to map out their digital likenesses. Ideally, every surface, curve and feature on her face is converted into math that the computer can understand and then relay to the 3-D printer.

The printer, with more exactness and precision than any human surgeon, lays down sheets of just four micrometers (four-thousandths of a millimeter) followed immediately by a layer of adhesive in a pattern dictated by the mathematical instructions – the sintering method. After repeating this process hundreds to thousands of times over the course of hours, the 3-D printer finishes 10-inch, high-resolution figurines that will stand atop their wedding cake.

But what if every Milwaukee Brewers bobble head could be cooked up in a cheap 3-D printer? What if you could start a small franchise selling bobble heads customized and printed, within minutes, right in front of each customer? What if you could produce shoes or ergonomically designed spatulas to fit a consumer’s grip while they waited? Coat hangers, kitchen tools—almost every product—can be prototyped using 3-D printing, but what happens when you take it beyond just the prototyping phase? What if you mass produced it in a factory, or made it possible for people with a printer to buy the rights to print a spatula at home? We have just explored the tip of the 3-D printing iceberg.

3-D printing is, in many ways, still in its infancy. Metals and plastics are common materials used, but Josh Delzer, a Kohl's associate at the Kohl's Design It! Lab, explained how he had found a wood-based material to create a more realistic 3-D print of Groot, the sentient tree from last year's hit film "Guardians of the Galaxy." It retained the roughness and texture of a plastic 3-D model, but it had the rich, grainy color of wood.

"3-D printing has been around for a long time, but it hasn't been until the past number of years that it has actually become accessible to the average consumer at a price point they could afford," Delzer said. "If you look at 3-D printing today, its price point is right on par with when the first color laser jets came out for small businesses and when they were getting them in their offices. Usually, you couldn't find those except for at bigger corporations, and the next step that happened there is that they came into the home because they're affordable. You're seeing the same exact thing happening with 3-D printing."

Industrial printing machines used by large corporations range from thousands to hundreds of thousands of dollars depending on the resolution of the printer. But now, commercial printers can be bought for as little as $300. This price point means that buying a 3-D printer is now about as affordable as buying a decent laser printer, just maybe not as useful – at least, not yet. Educating and preparing young minds for when high-quality 3-D printing does reach the home is part of what makes the Design It! Lab relevant and cutting-edge.

Already, free programs and designs are appearing on the internet. Download a program for your 3-D printer of a smartphone case and print your own within minutes. Customize chess pieces, print your own bottle opener or make your own paperclips. Toys and games can be created at home with less hassle than running out to the store. And perhaps the greatest success of the Design It! Lab is exposing kids to these technologies just as 3-D printing reaches the household market.

Most of the 3-D printers at a company liked Kohl's are used for design purposes. The design department prototypes housewares – almost everything that can be prototyped – in order to assess it before it hits the shelves. Kohl's hinted at future kiosks located at the entrances of their stores where customers could get their pictures taken and turned into a souvenir figurine to take home with them, much like the little girl at the entrance to the Design It! Lab. People at Kohl's who work with 3-D printers are thinking hard to come up with new ways to use these technologies.

"It's all new," said Delzer. "We're still learning about it and where it fits in."