Developer Josh Jeffers' new building planned for 511 N. Broadway has an anchor tenant. Law firm Husch Blackwell announced this morning that it has signed a letter of intent to lease more than 71,000 square feet on the top three stories of the nine-story building planned for the corner on Broadway and Clybourn for more than 15 years.

Kansas City-based law firm Husch Blackwell announced this morning that it has signed a letter of intent to lease more than 71,000 square feet on the top three stories of the nine-story, 153,000-square foot building planned for the corner on Broadway and Clybourn for more than 15 years.

The mixed-use development, with retail space, commercial office space and parking, is slated to be ready by late 2020. It was designed by Engberg Anderson Architects, and work is expected to begin in spring.

At its Milwaukee office, at 555 E. Wells St., Husch Blackwell has about 100 lawyers and paralegals and 80 administrative staff. Husch Blackwell inherited the space two years ago when it merged with Whyte Hirschboeck Dudek, which had been in the space since 2003. 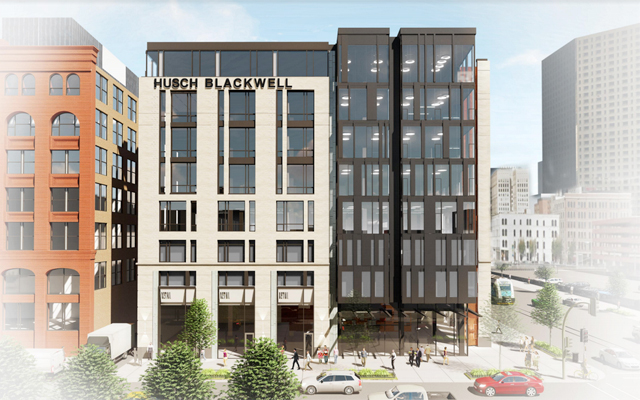 Despite the fact that it will be 25 percent smaller, the new space will allow the firm to add more employees, according to Husch Blackwell’s Milwaukee Office Managing Partner Jack Enea.

"We have put a lot of thought and deliberation into how to organize and design the new office," said Enea. "The most compelling argument for building an office from scratch was the ability to design it exactly to our own specifications. This allows for a better use of space, greater efficiency and cost management, and more amenities for our attorneys and staff."

The 511 N. Broadway site has long been a surface parking lot, though folks of "a certain age" will remember nightclubs like The Underground, Papagaio and Club New York occupying buildings there.