8 quotable dishes to relish at the Ambassador Hotel's The Fitz

The new restaurant at the Ambassador Hotel was named with a nod to F. Scott Fitzgerald, an author whose beautiful prose ruled during the roaring '20s. Interestingly, that same prose is an apt descriptor for some of our favorite dishes at The Fitz.

The Ambassador Hotel is undergoing a renaissance in food and beverage. And that’s played out through the launch of three reimagined venues, including the hotel bar Gin Rickey, a grab and go cafe called Deco, and a full service restaurant, The Fitz.

There’s a lot to love about each. Take The Fitz, for instance. The new sit-down restaurant is sporting new art-deco decor, comfortable seating and a brand new menu that showcases familiar dishes that have been reimagined using bold, unique and modern flavors.

But we love it even more for its name, which offers a nod to F. Scott Fitzgerald, an author whose beautiful prose ruled during the roaring '20s, around the same time the Ambassador was founded.

In fact, Fitzgerald’s prose seems the perfect vehicle to contextualize our experience with a selection of items from the new menu, including plates from Chef Jason Gorman and desserts from Pastry Chef Jennifer Gorman.

"Too much of anything is bad. But too much champagne is just right." 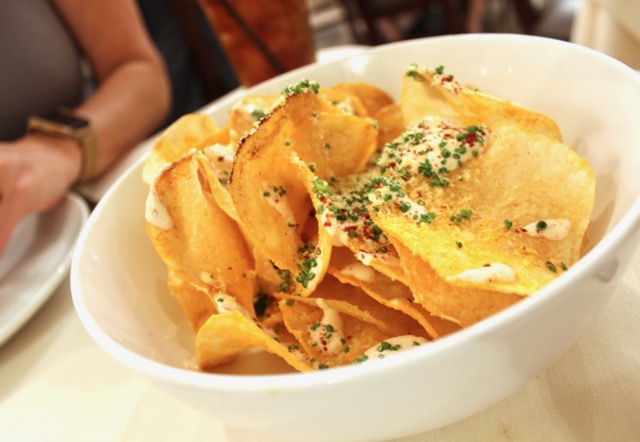 The same might well be true of these delightfully crunchy chips, which are enhanced with five-year aged cheddar, aleppo pepper, sour cream and chives ($7, lunch menu). Of course, while we're on the topic of champagne, a glass of sparkling wine would be the perfect accompaniment to these chips. 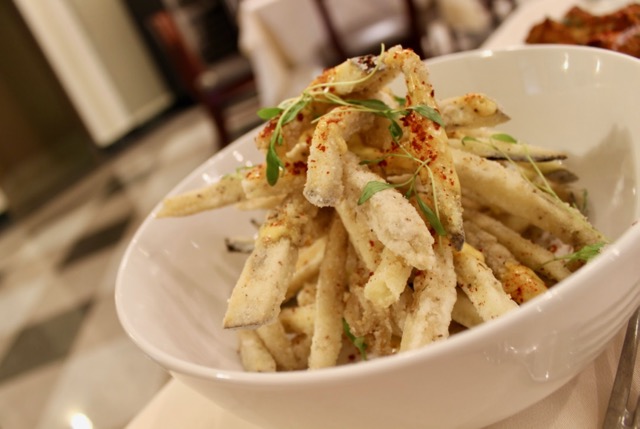 We can’t promise kisses. But, eating these eggplant fries – which are crisp and light and perked up with a bit of harissa aioli – could well be habit forming ($8, lunch menu). And that's a very good thing.

"I hope you see things that startle you. I hope you feel things you never felt before. I hope you meet people with a different point of view. I hope you live a life you're proud of. If you find that you're not, I hope you have the strength to start all over again." 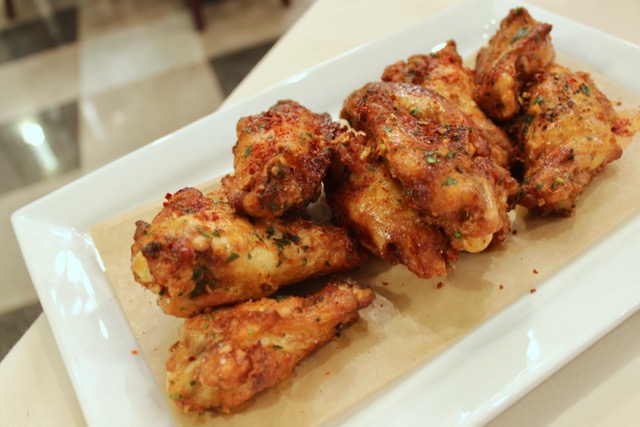 They’re not exactly startling. But, these wings might just make you feel things you’ve never felt before. And their point of view is distinctly Italian. Named in honor of restaurateur Tony Mantuano’s brother Gino, they are bright with lemon and rich with flavor from toasted garlic and Calabrian chilis. In fact, they provide the perfect opportunity to rethink what you know about chicken wings ($12, lunch menu).

"You are mysterious, I love you. You’re beautiful, intelligent and virtuous, and that’s the rarest known combination."

Salad is seldom an experiential affair. But, there’s a bit of magic in the Crab Louis salad on the dinner menu at The Fitz. It’s a gorgeous dish. A head of baby iceberg lettuce sits surrounded by heirloom tomatoes, avocado and delicious halves of unctuous seven-minute egg. But, the best part is in the eating. Split open the iceberg, and there’s a wealth of sweet, fresh crab meat gilded with the perfect amount of housemade thousand island dressing ($16, dinner menu). 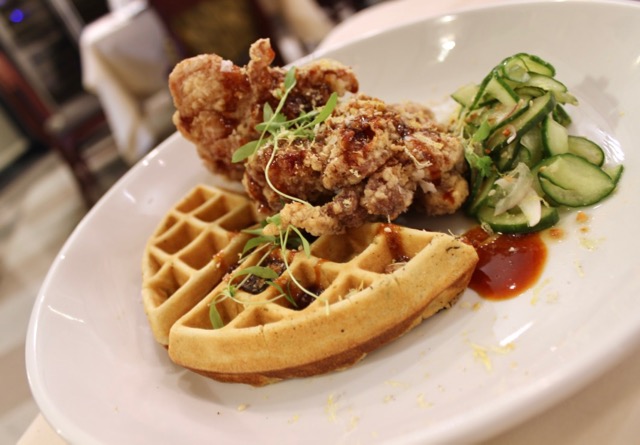 It’s great advice for writers. But, it’s similarly true of the work of chefs. Fortunately, aces like Gorman don’t just riff on chicken and waffles for the heck of it. This thoughtful take says something about his ability to combine both traditional and non-traditional elements in a successful, cohesive way. And such is the case with these housemade waffles, topped with tender pieces of boneless fried chicken and donned with Korean chili maple syrup, giving the dish a subtle Asian flair. Pickled cucumber salad rounds out the richness and pulls everything together. Fried chicken and waffles is available for lunch for $14. 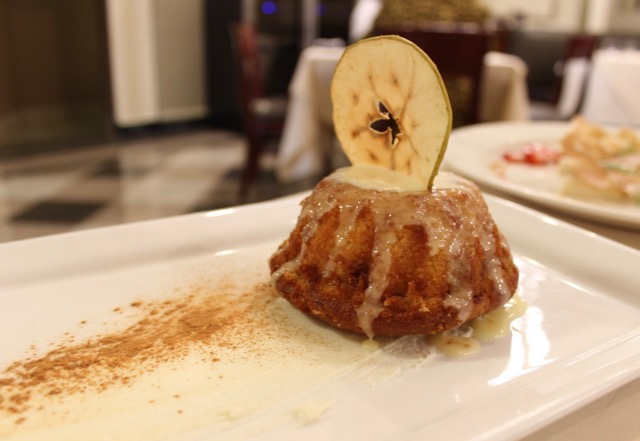 Sometimes simplicity is key. And so it is with Grandma’s apple bundt cake, a whorl of sliced apples and rich tender cake laced with cinnamon and Clock Shadow Creamery quark and glazed with a bit of orange. Based on Jennifer’s grandmother’s recipe, it’s as delicious as it is old fashioned ($7, dinner menu).

"So we beat on, boats against the current, borne back ceaselessly into the past." 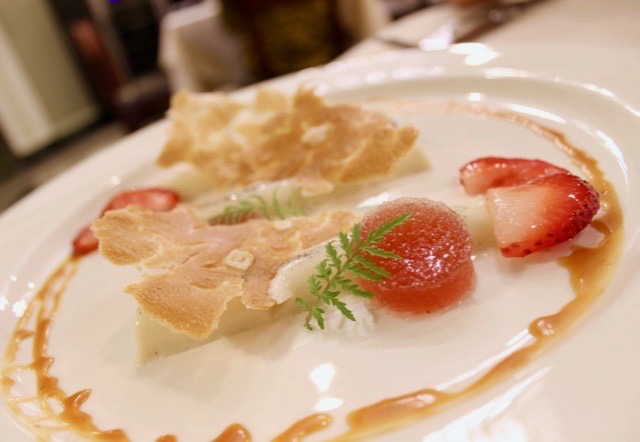 And the past is exactly where you’re going with this throwback dessert, which simultaneously deconstructs and captures the flavors of the strawberry pretzel salad that you may have eaten at a family potluck. Thin pretzel "paper" graces molded vanilla panna cotta that’s been plated alongside fresh strawberries, strawberry gelee and swirls of salted caramel. Don’t neglect the citrus lace, an edible herb which adds depth, along with bright, herbaceous citrus notes to each bite. Eggless custard is $7 on the dinner menu. 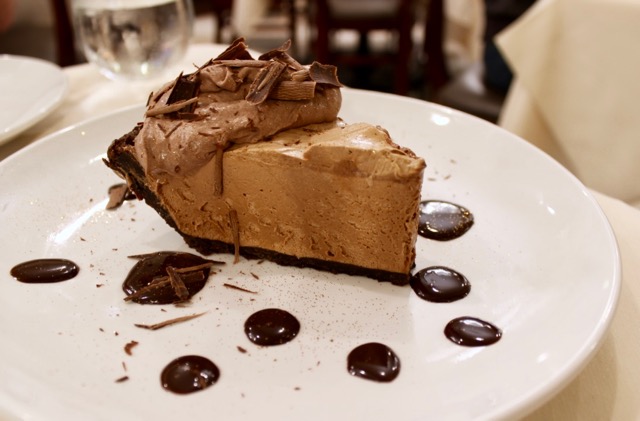 If this piece of dark chocolate pie doesn’t make you smile, I’d venture to say nothing will. A glint of gold dust is the only thing flashy about this masterpiece of chocolate bliss featuring balanced dark chocolate ganache and chocolate whipped cream rest upon the laurels of a chocolate pie crust ($8, dinner menu).