9Round owners pull no punches

With more than 600 locations across the country, 9Round has grown in the greater Milwaukee area in the past several years, too. I talked to two local franchise owners about the company, the workout, fitness and more.

With more than 600 locations across the country, 9Round has grown in the greater Milwaukee area in the past several years. Recently, I talked to two local franchise owners, Drew Stauffacher and Delia Luna, about the company, the workout, fitness and more.

OnMilwaukee: Let's start with a one or two-minute overview of who you are, and what you've done, and how you got here.

Drew Stauffacher: I have been in the fitness industry for 14 years. I started at Bally's as a personal trainer. I did that for six years, then worked at a couple different places, including  Vita Fitness and Physical Therapy (in the Third Ward).

While I was working at Vita, I'd heard about 9Round. I started working there part-time, then when the Oak Creek location opened, they offered me a full-time position there.

Then an opportunity presented itself to buy (a franchise) in Brookfield. That's when I became an owner. Then, we opened Wauwatosa this past summer.

From an education and growing up standpoint, when did you know that this was a career path?

Drew Stauffacher: Yeah, so I grew up in the martial arts world. I was teaching karate classes when I was 13 years old. I was really interested in making a career path of the karate studio type thing. But then as I started to grow up, I found a passion for teaching people.

I went to UWM, went to school for kinesiology and business with the idea that I would own and operate small fitness gyms. Luckily, with 9Round, I had my martial art background as my training background. Instead of me coming up with the next greatest and best thing, it was right there in front of me. I just went for it.

Delia Luna: As for myself, I was actually looking at different gyms to lose weight. I came across the Oak Creek gym. I went inside, and I think I actually met Drew the first time I was in there. I did a tour of the gym, and I looked further into it. As I was looking online, I looked into the actual possibility of buying the franchise. Then I took it on as more as an investment opportunity for the workout itself. Being an average woman, I've thought if this is something I can do, anybody can do it, because I was not fit in any type of way. I just considered myself your average person. Due to the low start-up, low overhead, I thought it would be a good idea to take a risk and try something different. 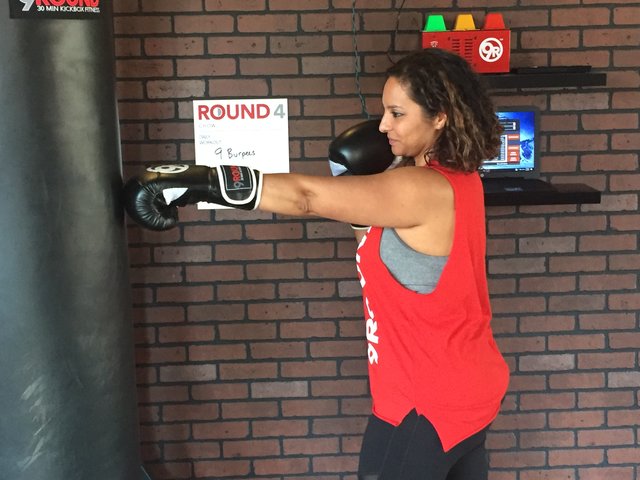 Describe 9Rounds for us?


Drew: What's great about the concept for our members is it's functional training. They could do it through everyday personal trainer meets what a professional kick boxer would do. We infuse it too and make an amazing 30-minute circuit. What's also great is there's no class times, so you can show up any time that we're open. There's always a 9Round certified trainer.

No matter if you're an elite athlete or someone that hasn't worked out in 20 years, we're going to be right there with you. We're going to guide you through the workout every day. It's always going to be something different, fun, exciting, to keep you motivated to come back.

What's also great ... you work at your own pace. It's three-minute rounds. If someone can only run through round two twice within three minutes, but then someone else that's an elite athlete can do it six times in three minutes, it's fine. They could be working out right next to each other, and it works out amazingly perfect, because we're a heart-rate monitoring gym. We're watching our trainers, but basically that someone that's your mom's age and someone that's an elite athlete, they would go in at a completely different paces but doing the same round and be working with an 80% to 89% of their max heart rate. That's what it's all about. That's why we see such a wide range of people.


Is there an intimidation factor for new people, if they don't know how to box or have never put gloves on before?

Delia: It can be (intimidating). I do get those questions a lot. "I've never tried it before." No, anybody can do it. We're here to teach you. We'll make sure that you're going to hit and kick properly, and show you the proper form, proper technique. Our job is to make sure that you're doing your best. That's what we want people to do.

Drew: We really focus as 9Round owners and trainers that when people walk through the door, they understand sooner rather than later that it's about having a good time, having fun, and it's about just getting fit. It's not about turning you into a black belt, or getting you into the ring, or that kind of stuff.

Who are your members?

Drew: I have two type of members. I have members that come in five, six days a week. I have members that will do this three days a week, and then they'll go outside running, especially in the summer time. A lot of the guys, they'll come in, do their cardio here, but then they'll go lift heavy weights at the gym. Those are the two that I've seen the most where people are going back and forth on.

Delia:  It goes back to the goal thing: What is your goal? If you're just looking for a place to have fun and get general fitness, and you're not getting ready for a Spartan Race or something like that, you can come here five days a week, lose weight, gain muscle, just tone up, do what you want to do and let this be your only thing. But if you're looking for specific goals, and that's where our trainers can come into play too. We can help you with that stuff, but we do have people that utilize 9Round two days week, and they utilize another gym two days a week, as well. All of our memberships are unlimited, so we do like to see people three, four, or five days a week. But everyone has different interests.

Whether you're a big athlete or not, what are some of the common mistakes that you see people do whether they're a member or not? When you're starting a gym, is it going too hard? Is it not having a plan? What are some of the mistakes?

Drew: Going too hard is a huge thing. Again, we do the heart rate training in here for a reason. You can actually overwork your body and burn lean muscle mass, which is the opposite of what we're trying to do. We're trying to build lean muscle mass. When you get in that 92% and above, you can actually be doing your body a disservice. That can be a huge issue with a lot of beginners, because they're just not ready for this intense ... it could be 9Round. It could be anything, just going out for a run.

The other thing is form with legs and just working legs in general. Two of the main things people always mess up is squat form and lunge form.

If you each had to give your two top exercises that you really think are beneficial or that you like, what are those?

Delia: For me, my favorite round would be round three. It's called the double-ended bag. It's a speed bag. It's a lot of footwork, so your hands and feet working together. It's as close as we really get to what it would be like to actually be sparring someone in the gyms. We don't do anything like that. You're really balancing. Your heart rate gets up. You're moving your hands really fast. We mix in squats, lunges, burpees, pushups at round three. You're punching. You're kicking. You're doing all that fun stuff. I love that. 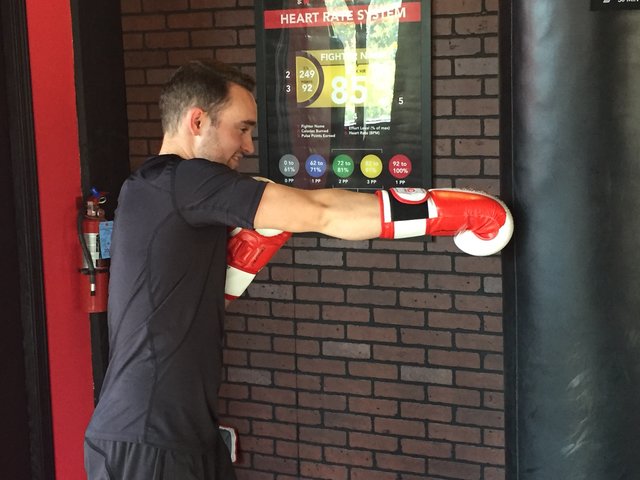 What's something that you guys don't buy into?

Delia: For myself, when I was struggling with losing weight or not seeing results, I wasn't eating enough. It's more because I wasn't organizing my schedule. I didn't organize my meals. Within the past three weeks, I organized my meals, I did the prep, I made sure I ate throughout the day. I'm already down 12 pounds in three weeks. That's just from eating more than me trying to grab a salad or running here just to get something in my body, and eating two times a day just because I didn't organize myself to eat more.

I always ask people to define success.  What's your definition?

Drew: For myself, it's having a balance between work and responsibilities, also responsibilities in general, family and myself. I'm learning that I need time for myself, so just finding the balance between life in general and just making sure that you pay attention, and none gets neglected. To me, that's success – a balanced life. I wanted to build a fun life for myself and have my own means. I'm able to do that with 9Round. That's what's been so cool, and that's why I've opened up my second location,

Delia: Success to me is having my big goals met, which basically just means I'm happy, I'm able to have a good balance too: balance of my home life, my work life, and my goals.