While scenic designer Todd Edward Ivins' knowledge of the Milwaukee Rep's "A Christmas Carol" was mostly a blank slate, he was more than aware of the daunting legacy before him when he began work helping to reimagine the holiday classic.

For many, it just wouldn’t be the holiday season without the warm sights, the cozy sounds and the not-so warm or cozy Ebenezer Scrooge of the Milwaukee Rep’s annual production, "A Christmas Carol."

Todd Edward Ivins, the scenic designer of this year’s brand new adaptation of Charles Dickens’ Christmas classic – premiering Tuesday night at The Pabst Theater – was not one of those people.

Not that he’s a Scrooge himself, of course. With jobs taking him back and forth across the nation creating mesmerizing sets for shows, he was just never able to catch "A Christmas Carol," only knowing his beloved predecessor from some photos. When he did finally manage to snag a seat for last year’s production, it was well after his own vision was off at the workshop, transforming from sketch to stage.

But while his knowledge of the show was mostly a blank slate, Ivins was more than aware of the importance of the job and the daunting legacy before him when he was pitched the project all the way back in January of 2015.

"I knew I was up against the gauntlet of the last ‘Christmas Carol’," Ivins said. He recalled one of the initial creative meetings where music arranger John Tanner spoke of the show’s last major reimagining in the mid-’90s, an event big enough to merit taking up most of the front page of the Journal-Sentinel, according to the designer. "We were told that is where this city is with this show. So if you think you understand, then you don’t."

So any change is a big change – and in the case of this year’s rendition, it’s all change, with a new Scrooge (Jonathan Wainwright), a brand new adaptation written by Rep artistic director Mark Clements and a brand new set working to tell its new take on the old classic. According to Ivins, however, it’ll still be the Dickens’ classic people love and recognize – perhaps even more so than ever before.

"We went back to the basics," he explained. "Reading (‘A Christmas Carol’), this is a great story, so we need to get out of the way of it. The story itself needs to transcend."

When Ivins says back to the basics, he means all the way back – back to when Dickens first brought his treasured holiday story to America, touring theaters across the country to simply read his tale to sold-out, mesmerized crowds.

"They filled theaters like The Pabst and stuck a man at a lectern on the stage, and he read the book – top to tail, the whole book," Ivins said. "That was his version of it that he presented, so we actually start our ‘Christmas Carol’ with Dickens reading it as he would. We have researched, and they’ve made his lectern, set up the way he set it up."

Two hours of a man reading a book on a stage might make for a historically accurate reinterpretation of the classic, but not exactly an aesthetically exhilarating one, so of course Dickens’ story comes to life on stage, inviting and bringing the audience into Scrooge’s tale of redemption – quite literally in some cases in the script.

"In The Pabst, it’s a proscenium house, which is not as immersive as the thrust in the Quadracci. There, the theater is practically sitting on you – you are in it – and the only way to up that game is to put audience on the stage or make it in the round," Ivins explained. "So (Clements) has actually incorporated some interaction with the audience with Scrooge. So the audience gets into the characters a little bit more and into the story a little bit more. That’ll be a huge major difference between previous editions and this one – and it will involve and immerse them in it." 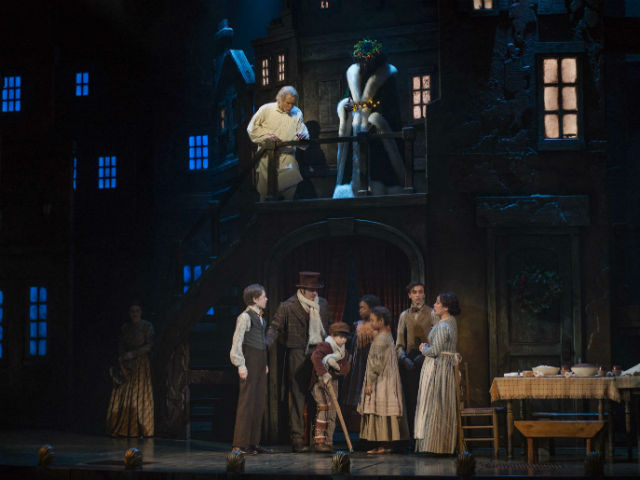 Part of the new production’s mission to both get back to the basics of Dickens’ work and further immerse the audience into the story is hitting as many locations and story beats from the original tale as possible.

"Because it goes to so many different places, you’re faced with one of two choices: You either support that or you don’t," Ivins said. "And Mark really wanted to support the novel, so he wanted to hit them. Mark was like, ‘I want to hit every place that the novel hits. I don’t want to skip any of them because each one has a seriously important moment – that’s why Dickens wrote it – and I want what Dickens wrote to go to the audience and for them to feel every piece that he wrote."

"The previous ‘Christmas Carol’ condensed a lot of those places. Instead of having scenes A, B and C, they were pushed together into scene A, so a lot of these little narratives that happen in different places with different characters were happening together and combined into one."

By expanding the story out, the hope, according to Ivins, is to make some of the smaller character beats hit even harder than before. For instance, Ivins noted that the relationship between Scrooge and Belle took place rather quickly in the former version, whereas the new production hits places like Belle’s home and further details their lives before and after one another – including Scrooge’s emotional realization of a potential path forever lost.

"There are a lot of little poignant things that happen along the way, and those little things help build the arc of Scrooge’s journey – and when they’re condensed, you watch a man go from "Humbug!" one second to "Merry Christmas!" the next, and the journey just isn’t there," Ivins said.

The goal of hitting every place in a novel (30 locations, by Ivins’ count) certainly puts a lot of pressure on the scenic designer to find a way to get the audience to more than two dozen locales without killing the flow of the show with constant blackouts and breaks – all while also trying to create a brand new look for a deeply cherished classic show. For the latter aesthetic challenge, Ivins transformed the former show’s warm, rich and lavishly decorated vision of London to a dirty, ashen London, "a clot of urban density" with a subtle colors and light trying to brighten the dark and dreary soot-covered London Dickens called home.

"We are no longer in the Hallmark card version of Dickens, which is the former version of the show – which was beautiful and gorgeous," Ivins explained. "Milwaukee will need to forgive us for putting you back into London in the mid-1800s, where people dumped their toilet on the street and it was disgusting. We are presenting the darkness from which comes the light."

As for the more logistical problem of transporting the audience from place to place without breaking the show up, Ivins created a large turntable stage with an added outside ring that not only helps move the London streets and cityscape smoothly to new locales while also sneakily unfolding into the various interiors needed. It’s an impressive mixture of Rubik’s Cube, dollhouse and maze, moving to a seemingly new place with just a slight turn.

"The reason we did what we did was so that we could just spin it just a little bit and give you a different place in London so we can keep people on top of where they are in the story, as opposed to having to do some massive scene change where (the audience) starts thinking, ‘Did I leave the oven on?’" Ivins explained. "You leave the story, so we’re trying to keep it active and immersive and fluid.

"It will help provide all the variations of the places we need to go to. It will provide the journey."

That journey is essential for Ivins and this new "Christmas Carol" – yes, Scrooge’s emotional journey but also the physical journey, of feeling like Scrooge and you, the audience, are moving from locale to locale, that you are being truly transported through a city, through time, though a man’s life.

"The journey is really the thing we’ve wanted to accomplish out of this," Ivins said. "It’s really hard; when you read ‘Christmas Carol,’ you go to all of these places, and it reads like a film, not a piece of theater. But this is how we thought best to accomplish the story."

And on Tuesday night, this new "Christmas Carol" will start its own new journey into the halls of Milwaukee holiday history.