The Chicago-based author of "Aretha Franklin: Amazing Grace" has set his sights on Windy City soul music and how it helped fuel black empowerment in his new book, "Move On Up: Chicago Soul Music and Black Cultural Power." In advance of his Milwaukee visit this week, we asked for his top Chicago soul songs.

The Chicago-based author of "Aretha Franklin: Amazing Grace" has set his sights on Windy City soul music and how it helped fuel black empowerment in his new book, "Move On Up: Chicago Soul Music and Black Cultural Power."

Aaron Cohen – who also kindly helped me with some Chicago research for my story about jazz organist Baby Face Willette – talks about the hitmakers, like The Impressions and Curtis Mayfield, Chaka Khan, The Chi-Lites, The Dells, but his book, published by the University of Chicago Press, is more than just a romp through the R&B charts.

Rather, Cohen seeks to tell the story of how folks like Mayfield and Phil Cohran and the Pharaohs made music aimed at uplifting black consciousness and boosting African-American pride. 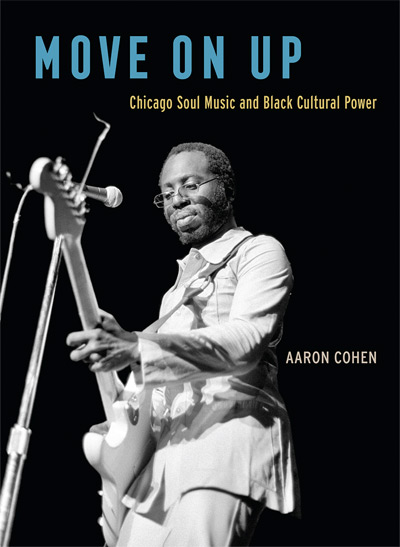 As the publisher’s description notes, "Together, soul music and black-owned businesses thrived. Record producers and song-writers broadcast optimism for black America’s future through their sophisticated, jazz-inspired productions. ... Soul music also accompanied the rise of African-American advertisers and the campaign of Chicago’s first black mayor, Harold Washington, in 1983. This empowerment was set in stark relief by the social unrest roiling in Chicago and across the nation: as Chicago’s homegrown record labels produced rising stars singing songs of progress and freedom, Chicago’s black middle class faced limited economic opportunities and deep-seated segregation, all against a backdrop of nationwide deindustrialization."

Cohen tirelessly researched these artists and their impacts, and also interviewed more than 100 folks for the book, which gets a boost from the kind of passion any real music fan can understand.

In advance of his 6 p.m., Saturday, Nov 2 appearance at Boswell Book Co., 2552 N. Downer Ave., with DJ Eric Blowtorch, we asked Cohen for his top 10 Chicago soul tracks, which are listed here in rough chronological order.

Gene Chandler uses his voice like a saxophone on this assertive declaration of identity (with a unique appropriation of nobility and heraldry). The song’s been covered a few times, but nobody does it better than the original Duke.

Shortly after Jackie Ross’ 18th birthday, she charmed the world with this tune (which borrows a bit from the jazz standard "Tenderly"). One of Chicago’s great arrangers, Riley Hampton, put the record together.

One of Curtis Mayfield’s best songs and an enduring Civil Rights anthem reflecting the faith that launched the movement. The song also features beautiful string arrangements from Johnny Pate.

Syl Johnson responded to the assassination of Dr. Martin Luther King with this stark statement. The song would be the title track of his classic concept album that reflected on racism in America – and asked questions that remain unanswered.

A powerful singer who also co-wrote numerous great tracks with her partner, Chi-Lite Eugene Record. Another result (out of hundreds) of the great team that Carl Davis assembled at Brunswick.

Charles Stepney put this group together to try out his daring compositions and productions, which brought together his European classical training with African rhythms, tape loops, and other studio magic. Lead voice is future soul star Minnie Riperton.

Soul harmonies as a warning shot in this song that became a favorite among the Black Panthers. Bass singer Creadel "Red" Jones adds the heft this message requires.

Carving his own space that embraced soul, jazz and folk, Terry Callier’s music was always unclassifiable and reflected his deep thoughts and gentle spirit. His clear message is that love has no boundaries.

Daryl Cameron created the Afrofuturist Captain Sky alter ego and this relentlessly funky track, which has been sampled at least 42 times in hip hop. He even got name checked on The Sugarhill Gang’s "Rapper’s Delight."