Aaron Rodgers threw six first-half touchdown passes as the Green Bay Packers throttled the Chicago Bears on Sunday night in front of a record crowd at Lambeau Field and on national television.

GREEN BAY – Back in late September in Chicago, Jay Cutler connected with Alshon Jeffery on an 8-yard pass for a score, giving the Bears a 17-14 lead over the Green Bay Packers with 6 minutes, 21 seconds left in the first half of that early season NFC North matchup.

The Packers, of course, would go on to score 24 unanswered points and win going away, 38-17 – a contest immortalized as the "relax" game.

The two teams met again Sunday night on national television, and in front of a record crowd of 78,292 at Lambeau Field, and Aaron Rodgers threw six first half touchdowns to head into the locker room leading 42-0.

"Well, I can promise you this is not that easy," Rodgers said, pointing to all the work during the week of practice and making the correct calls during the game. "It's not easy to do this every week."

It looked easy, however.

And once the Packers recovered a fumbled punt attempt early in the third quarter, which led to a Mason Crosby field goal and a 45-0 lead, the Packers had outscored the Bears 69-0 since that Cutler-to-Jeffrey touchdown in September. 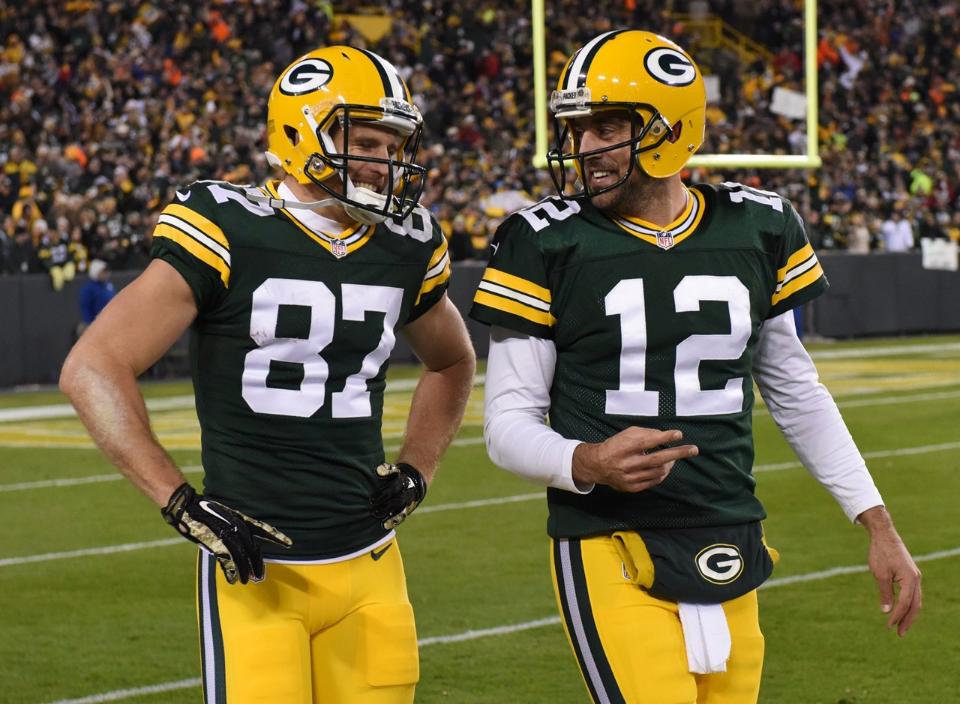 "We hit some good ones tonight, missed a couple, but we went six quarters without punting (against Chicago)," Rodgers said. "That's pretty exceptional. It doesn't happen a whole lot so we're proud of that."

The Bears took the opening kickoff Sunday and proceeded to commit a penalty on the play, and their opening series resulted in a punt. The Packers then went on a 12-play, 71-yard drive that ended with a 1-yard touchdown pass on 4th-and-goal from Rodgers to Brandon Bostick.

Chicago crumbled after that, with drives of 17, 1, 55, 34 and 18 yards. Each punt (or turnover) that ended that drive resulted in a Packers touchdown.

"We got up on 'em pretty fast," said Andrew Quarless, whose 4-yard touchdown put the Packers up 14-0 with 2:01 left in the first quarter.

"Our biggest thing was about finishing. I say put 'em in the dirt, finish 'em. Lay 'em down. So that's what I was saying."

Rodgers had two possessions coming out of the half to try and tie the NFL record for touchdown passes in a game before he pulled for Matt Flynn (who just happens to share the team record of six TD passes with Rodgers).

"This is definitely, I think, at the top of 'em, maybe top five," Quarless said of Rodgers' performance. "That's amazing numbers."

The Bears did eventually reach the end zone to snap that scoreless skid on a 45-yard pass from Cutler to Brandon Marshall after Crosby’s field goal to make it 45-7. But it was far too little, and far too late.

"I think after we jumped out to that lead, it kind of took a little bit out of them," Eddie Lacy said. "but coach talk about keeping your foot on the gas and in the first half we definitely did that.

"The faster we played, the more you could see them not really wanting to be out there any more. 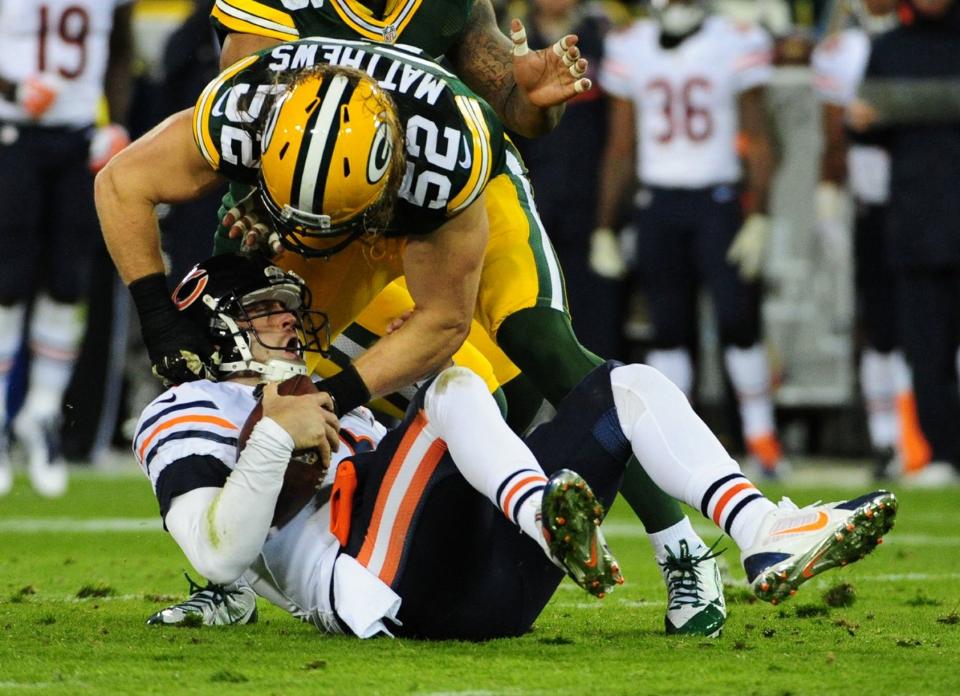 After eight games, Packers linebacker Clay Matthews wasn’t exactly having a Matthews-type season. He entered the contest against the Bears with just 2 ½ sacks and 15 tackles – far from his usual Pro Bowl/Defensive Player of the Year-type production.

Matthews was moving around in Dom Capers’ revamped defensive scheme, asked to drop into coverage, to remain disciplined on the edges. But on Sunday, after a week off, Matthews began the game lining up at inside linebacker. Then, he was moved outside. And suddenly, Matthews was everywhere.

In his best game of the season, the linebacker recorded a sack, nine tackles – including two for loss – and some huge hits on Cutler and on Bears wide receiver Chris Williams on a reverse. He was also chasing down wide receivers in pursuit. He looked fast, healthy, and proved to be a difference-maker in the first half in getting the Packers defense off the field.

"I was in a great position to make a lot of plays tonight," Matthews said. "I think that ultimately was reason why it led to making a few changes, to go bigger inside, as well as stopping the run obviously."

He admitted it was a five day "crash course" on the position and he's curious to see what it leads to going forward, but at least for one night, it was a success.

"Going out there, there obviously was some reservations about how I was going to play, but I think it really comes down to – in hindsight it's just about being an athlete, the will, the want to, and getting to the ball," he said.

A first half breakdown

The game was decided in the first half, when the Packers took a 42-0 lead into the break. This was perhaps the best way to break it down, especially since this first guy had an eerier premonition that leaving super early was the best idea  one could have ...

If you blinked, the Packers were up 14-0, and the reactions were fast and furious …

At this rate I will be home to tuck lil leroy in for bed#bearsstillsuck — leroy butler (@leap36) November 10, 2014

A former Bears defender even had to weigh in …

Which makes this perhaps the most unsurprising tweet after that …

After Bears immediately punted, a kicker even piped up …

The @ChicagoBears are replacing the "challenge" flag with this… pic.twitter.com/Sy6jLn5d33 — Drew Olson (@DrewOlsonMKE) November 10, 2014

"Can we have rescue over here ... for intoxication." #scannersquawk #Packers #CHIvsGB — Doug Schneider (@PGDougSchneider) November 10, 2014

And this, with just under 2 minutes left …

Lambeau arrests appear to be outstripping the PD's ability to transport them at the moment. #scannersquawk #Packers #CHIvsGB — Doug Schneider (@PGDougSchneider) November 10, 2014

That about sums it up, doesn’t it? 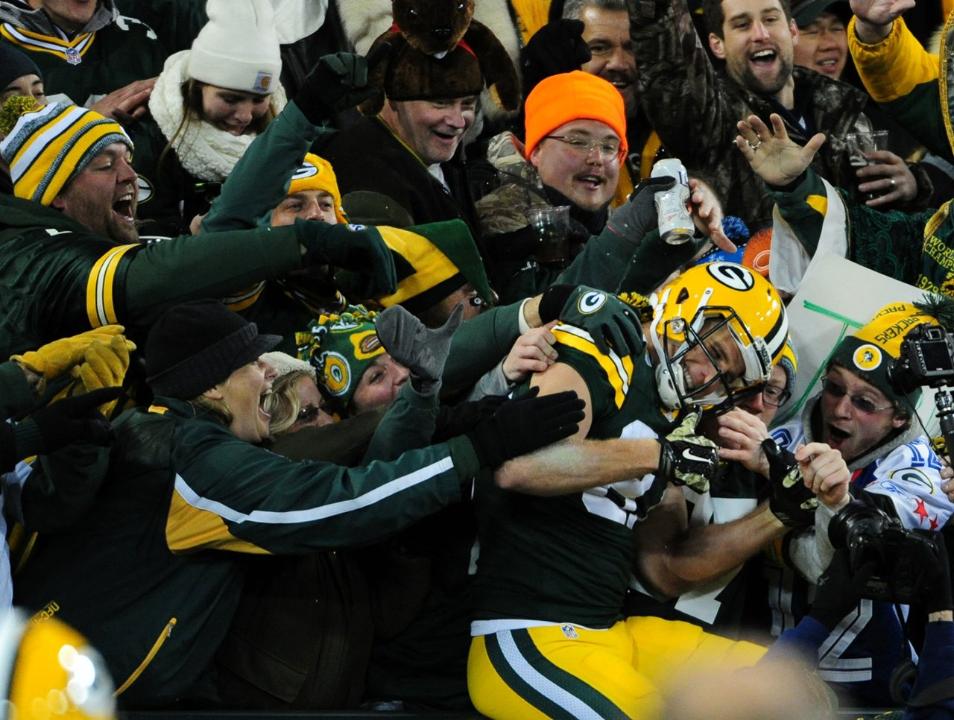 When Bears safety Chris Conte blew his assignment and Jordy Nelson scooted behind him for a 73-yard touchdown in the second quarter, it became the 16th touchdown pass of 70 yards or more for Aaron Rodgers. It was a notable accomplishment, as it moved him out of a tie with his predecessor, Brett Favre, and Peyton Manning for most in NFL history.

Here were some other notable stats from the game:

And, finally, an image that sums Sunday night up pretty well: