How Seth Meyers provoked an accidental home birth in Milwaukee

Not all coincidences are created equal and some are downright uncanny. Such is the case with a coincidence that happened last weekend involving Seth Meyers, a Whitefish Bay family and an accidental bathroom birth.

If we choose to notice coincidences, we realize they happen all the time. Like, we learn a new word – or hear a word we haven't heard in a very long time – and then a radio DJ uses it on air the next day. (This happened to me last summer with the word "confluence" and Marcus Doucette from 88Nine Radio Milwaukee.) Or we realize we share a birthday with our favorite bank teller, the same one we’ve had since college who once said to you "what overdraft fee?" and winked. (This may or may not have happened to me.) You know, that kind of thing.

But not all coincidences are created equal. And some are downright uncanny. Such is the case with a coincidence that happened last weekend involving a Seth Meyers performance, a Whitefish Bay family and an accidental bathroom birth.

When Meggie Graham bought Seth Meyers tickets for her husband, Dan, for Christmas she thought the date would not conflict with the birth of their second child. After all, she would only be 36 weeks pregnant when he performed at the Pabst Theater on Jan. 12.

"When I gave Dan the tickets I even said to him that if for some reason I wasn’t feeling up for the show, he should still go with a friend," says Meggie. "We were so excited. We watch Seth almost every night after Penelope goes to bed. He’s hysterical."

But when the night of the concert rolled around, Meggie felt great and she and Dan went to dinner at the East Town Kitchen & Bar before the show. Meggie started having some contractions, but believed they were Braxton Hicks contractions – non-labor-inducing contractions common during pregnancy – and thought nothing of it.

Sitting in the theater prior to Meyers taking the stage, Dan and Meggie saw numerous people they knew and many asked when the baby was due.

"Not for another month," Meggie said repeatedly.

During his performance, Meyers told a dramatic story about his wife delivering their second child in the lobby of their building when they were on their way to the hospital.

"The only way I can describe it is my wife looked like someone who was hiding a baby in her sweatpants," Meyers says during the bit which he also told during his television show.

"We laughed and looked at each other after that story," says Dan. "And we talked about it on the way home. We actually talked about what we would do if that happened to us."

After taking a shower and going to bed when she got home, Meggie woke up around 2 a.m. to more contractions. They were stronger than they had been earlier in the evening, so she woke Dan.

"I was hesitant to call Katie (her sister) to come over to stay with Nellie because I wasn't sure it was the real thing," says Meggie.

Dan called Katie (Kalt) anyway and, because they live only a few blocks apart, she was at the Grahams' home within a few minutes. When Katie arrived, Meggie’s contractions had gotten even stronger, so Dan went out to warm up the car and call his cousin, Beth Finseth, an OBGYN who also lives close by.

Katie started to help her sister walk down the stairs and, halfway down, something  changed. Meggie’s pain seemed to double and she said, "I think I need to pee!"

So when they got to the bottom of the stairs, Katie helped Meggie into the half bath on the first floor. She turned around, saw Dan in the doorway and told him she was calling 911. In that second, Dan knew this was really going to happen. Not as they had planned, but right here, right now, in the bathroom. 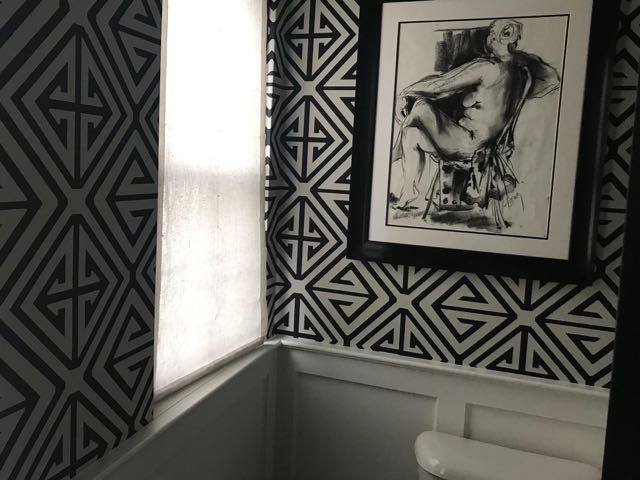 "I looked at Meggie, and then I looked down and I saw a baby’s head, so I knelt down and the next thing I knew I was holding a baby," says Dan.

"It was – well, it was exactly how Seth described it – like trying to catch a wet bag of oranges."

Katie came back into the bathroom, wide-eyed, and everyone was crying.

"That was my favorite part. The baby came after we called 911 but before the paramedics came and it was only a couple of minutes, but it was just the four of us – and Penelope upstairs. No one else. It was really…nice," says Katie.

After a couple of seconds, Meggie said, "Is he OK?"

They quickly realized no one had checked for boy or girl parts – plus Dan and Meggie chose not to know the baby’s gender during the pregnancy – so Katie peeked under the towel swaddling the baby.

Ada Lou was born at 3:14 a.m. (ish?) She was four weeks premature, but completely healthy and later weighed in at 7 pounds and 4 ounces at the hospital.

The paramedics and Finseth arrived at the house at the same time – just moments later. She was followed by a police car trying to pull her over for speeding, but was able to explain once she was in front of the Graham's house. Finseth made it into the house just in time to cut and clamp the cord before the paramedics took Meggie, Dan and Ada to the hospital. 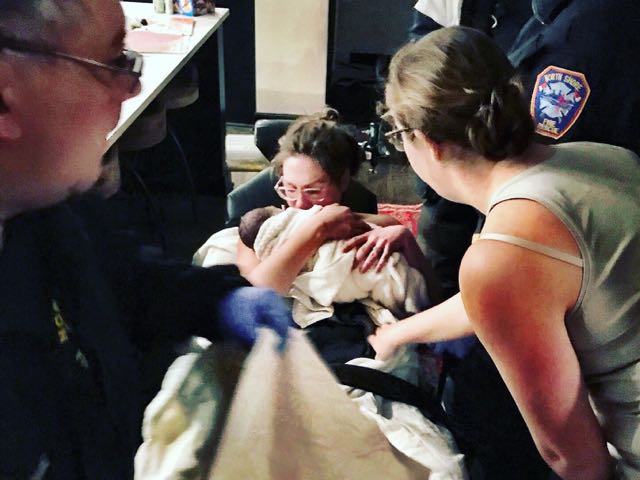 Katie stayed behind to be with Penelope, who had slept soundly through her sister’s dramatic appearance.

"It was fast and surprising and fantastic," says Meggie of her second birth experience. "People have home births all the time and it all works out fine, but they’re prepared. We obviously weren’t. But it was really cool and now it’s such a great story for the rest of our lives."

Meggie and Ada stayed at Mount Sinai Hospital for 24 hours just for observation.

"I was wheeled into labor and delivery holding my baby – that doesn't happen too often – and when my midwife walked in she said ‘well that was easy for me!'" says Meggie.

At the hospital, Meggie and Dan decided that Seth Meyers' humor – and Meggie's hearty laughing – expedited Ada's entrance to the world. "Maybe it wouldn't have happened with a less-funny comedian. I mean, we saw Trevor Noah the week before and nothing," jokes Dan. "Not a single contraction."

They also lightly considered naming their daughter after Seth Meyers.

"His name isn't very feminine, so we stuck with our original name," says Dan. "Although I have considered hanging a photo of Seth in our bathroom."