It's been five years since the launch of Afro Fusion Cuisine. And growth for the Wauwatosa-based small business has been based largely based on local support, including partnerships with Hometown Sausage Kitchen and Outpost Natural Foods Cooperative.

Along the way, the brand has brought authentic African and Jamaican flavors to grocery store shelves in a form that's healthful, convenient, easy to use, and highly adaptable to everyday eating. Afro Fusion also birthed a restaurant, Irie Zulu, which serves up some of the best Afro-Caribbean fare in the city.

But owner Yollande Deacon doesn’t take the credit for her success. In fact, she says the foundations for her growth have been built on loyal customers and solid local partnerships, including particularly successful collaborations with Hometown Sausage Kitchen and Outpost Natural Foods Cooperative. 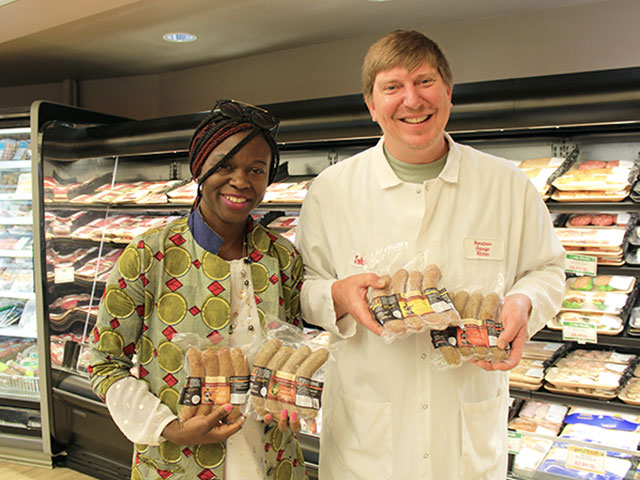 Sourcing locally has always been a priority for Deacon, who uses Spice House as a source for ingredients for her spice blends and local farms to source vegetables for her line of sauces. In the case of her sausages, keeping things local meant forging a relationship with sausage experts John Hudoc and Thomas Cicero of Hometown Sausage Kitchen in East Troy.

"At the time, my business was just beginning to really grow," notes Hudoc. "It was a challenging proposition, but when she approached me, I had a really good gut feeling about it. The product is unique, and she came with a dream that I really believed in with her."

For seven months, Deacon and Hudoc tweaked her family recipes, recreating them so that they could be scaled up for commercial sales. They also looked for places to bring efficiency to processes and took care in ensuring they were meeting necessary regulations.

"The sausage is very labor intensive in comparison to some," Hudoc says. "But, for us, that labor is worth it; it’s one of the elements that really make it unique. We’re using fresh products, including onions, so there’s a lot of prep work before we can begin processing. And when you’re processing 800 pounds at a time, it’s challenging."

Deacon says that finding someone who really understood her vision and was willing to work with her to create the product she envisioned was priceless.

"The relationship I have with John [Hudoc] has made this gratifying," Deacon says. "It’s really two artisans working together. It’s a partnership. And when I think about who I want to work with, I choose people who are serious about their art. It’s not completely about making money. It’s about doing things right."

But Deacon’s local story doesn’t end with her work with Hometown Sausage Kitchen. In fact, growth for the Wauwatosa-based small business has been based largely on leveraging local connections, including a relationship with local retailer Outpost Natural Foods Cooperative. 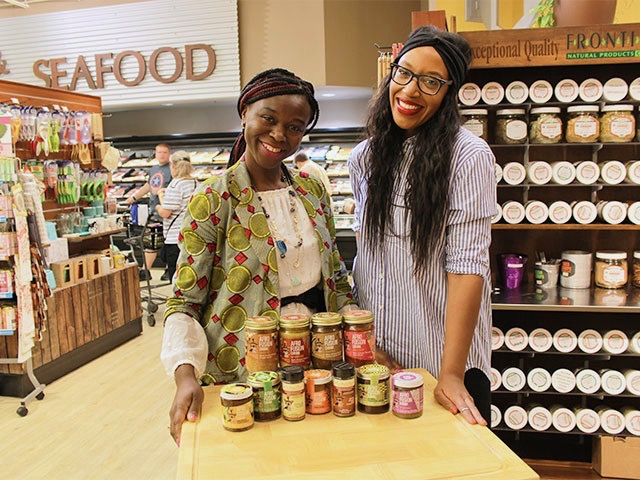 Beginning this month, Outpost will take on a new role in the growth of Deacon’s company, as it becomes the exclusive retail source for the full line of Afro Fusion Cuisine products. In addition to stocking all varieties of spices, sauces and sausages, it will be first in line to carry new Afro Fusion flavors, as well as any new products being tested for a more broad release.

It’s good news for fans of the Afro Fusion line, who (in the past) would have to visit multiple grocers to find specific products.

"With the interest in what we’re doing, we realized we really have to do it right," says Deacon, who also owns Irie Zulu restaurant in Wauwatosa. She notes that Outpost was the first grocer to carry Afro Fusion products, and it was their approach to working with small vendors that made her decide to use it as a major hub for her product line.

"My relationship with Outpost goes way back to when I started my business," notes Deacon. "And they’ve always been very supportive. They helped me with pricing when I first started, and then they carried my full line of spices from the very beginning. But, I am a small maker, and it was sometimes a struggle. There were sometimes orders that I couldn’t fill. And Outpost still stood by my side."

One of the times things got rocky for the small local business was during Deacon’s second pregnancy, during which she was on bed rest for seven months. During that time, she says she only kept minimal inventory at a few select retailers, including Whole Foods and Outpost. And some stores, she says, weren’t happy.

"It was tough," she says. "I knew I had to step back. But, it was tough working with retailers who only cared about keeping up their inventory."

Deacon says it’s a rarity for a retailer to walk with a small business through their stages of development, but Outpost has developed a reputation for being very supportive of small local businesses.

"They’re doing a great job tapping into the market of new, innovative products that really offer customers something fresh and different," she says. "In our case, we’re bringing global flavors to customers, and we love the fact that we can utilize our local assets to really grow the business."

Anne Vedder, purchasing and category manager Outpost, says the reasoning behind Outpost’s support for small local brands lies in its mission as a cooperative entity.

"With Afro Fusion as well as with other local and regional vendors, or new start-ups, it really boils down to one of the reasons why the cooperative exists," she explains. "Our owners and our board of directors want us to create those local connections, and it’s part of our mission to foster those relationships. We believe that strong local economies really create stronger economies overall. So, creating a climate where there are more than just national chains is an important piece of that." 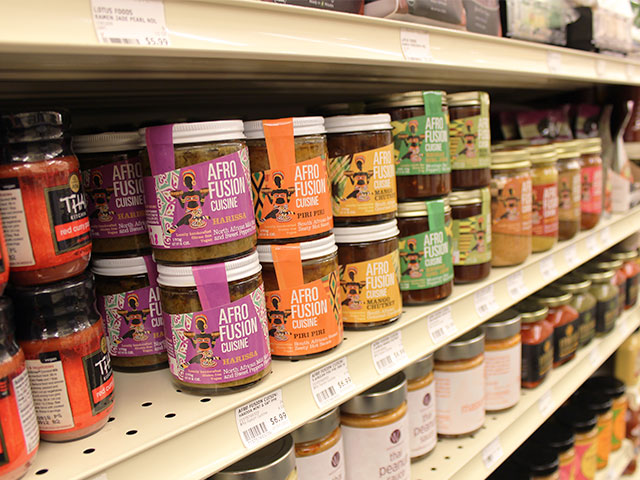 Vedder says that sourcing local products is part of the cooperative’s mission to create lively neighborhood markets where local residents can find exceptional variety in the product mix. Working with small vendors ensures that.

"We know what makes a product successful in our stores, and we can provide different ways to market those products and give them extra attention," she explains. "And because it’s part of our mission, it’s not as much about getting something back from the producers as it is assisting them with building their brand."

For Deacon, that extra attention has made a huge difference.

"As a female entrepreneur who is also raising a family, it’s very challenging," she says. "And there’s a real human side in terms of how Outpost deals with its customers. You see that in the way meetings are held and the interactions even when you make a delivery to a store. They’ve been on the forefront for identifying makers and supporting them when no one else would give them a shot. And it takes a really special retailer to work with an entrepreneur at that stage. For me, they’ve made all the difference."

10 fun finds at the new Mo's Food Market on Clybourn