Albanese's twist on an Italian favorite is a winner at Sporkies

The 2017 Sporkies competition, held this morning at the Wisconsin State Fair, was a gut-busting barrel of fun, with eight creations competing for the coveted Golden Spork Award. And Albanese's came out on top with its Spaghetti and Meatballs Mozzarella Sticks.

The 2017 Sporkies competition, held yesterday morning at the Wisconsin State Fair, was a gut-busting barrel of fun, with eight creations competing for the coveted Golden Spork Award.

This year, I was honored to be among a group of esteemed (and fun) judges including LeRoy Butler, Steve Palec , Nicole Koglin, Tonette Walker and this year’s fairgoer judge, Monique Nelson. Nelson is a State Fair devotee who told me she comes to the fair with a highlighted list of must-try foods each year. The event was emceed by fellow food lover, Kyle Cherek, host of "Wisconsin Foodie."

And there was some tough competition. There were massive items, like Rupena’s Great Balls of Fire Sandwich, which was jam packed with a Hungarian sausage patty, garlic sour cream sauce, stuffing balls, pulled pork and creamy coleslaw. There were also comfort food items, like the Deep-Fried Grilled Cheese Bites, which were served up with a tomato-soup sauce for dipping. And there were pork-filled concoctions like the Three Little Pigs Ravioli from Brew City: handmade bacon ravioli are stuffed with three different styles of pork including bourbon bacon jam, house smoked pulled pork shoulder and pancetta.

But, the winner of this year’s competition won over all the judges with its simple Italian flair: Albanese’s Spaghetti & Meatballs Mozzarella Sticks, which brought together the flavors of spaghetti, meatballs and mozzarella cheese inside a deep-fried wonton wrapper shell. 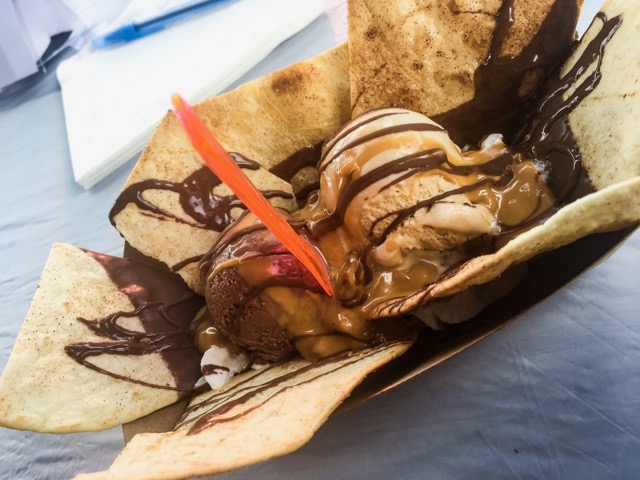 And in third place was the towering Budweiser Pavilion Grill Triple Threat – a trio of skewered sliders including a smoked jalapeno, bacon and cheddar brat slider; a Budweiser BBQ pulled pork slider; and a bourbon bacon cheeseburger slider. 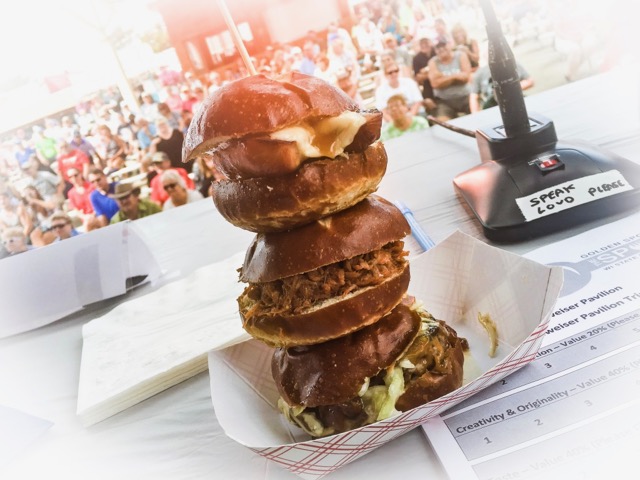 The #FairgoersFave, picked by State Fair attendees, was Saz’s Monkey Business, a dessert burrito stuffed with house-made bacon jam and creamy peanut butter, then deep fried, drizzled with Wisconsin honey, and finished with a sprinkle of chipotle cinnamon sugar.

Each creation had its own charms. But, if I had to pick a favorite among the non-awarded finalists, my honorable mention would have to go to Mexican Grill’s Buffalo Mac & Cheese Quesadilla, featuring grilled tortillas stuffed with shredded buffalo chicken, queso mac and cheese, bacon and crushed Doritos.

The quesadilla was chock-full of buffalo chicken flavor. The macaroni and cheese was creamy and the Doritos added a crisp, flavorful burst. It was also huge… easily shareable among multiple people. Totally a winner in my book.