While wes regularly rue the loss of the Milwaukee's grand old train stations, two former passenger stations quietly survive. One is the Public Service Building on Michigan Street, which served Interurban commuter lines. The other is the former Allis Station, tucked beneath the tracks in Walker's Point.

One is the Public Service Building on Michigan Street, which served passengers of Interurban commuter lines.

The other is the former Allis Station, tucked beneath the tracks in Walker’s Point.

The trains on the tracks above still rumble past, but they no longer stop and, in fact, the old platform, which once had an iron and glass canopy, is long gone. Inside, the station, however, trains of all kinds continue to run and stop and run again in a sprawling little world created by the model railroad club that has occupied the space since 1936. 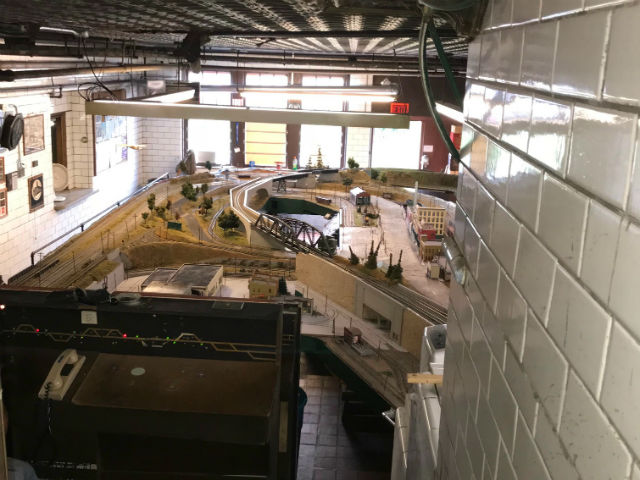 The story of the station, 215 E. National Ave., really begins with the Allis Company, founded in 1847 as Reliance Works foundry, located on Plankinton Avenue in Downtown. Edward P. Allis bought the company at a sheriff’s auction in 1861 and six years later moved it Walker’s Point.

Though the current depot was built in 1916, a station of wood construction preceded it, and both iterations were called the Allis Station because much of the traffic through the depot consisted of employees of the company, which greatly expanded its operations to the suburbs. West Allis had been called North Greenfield before the company moved the bulk of its manufacturing there just after the turn of the 20th century. 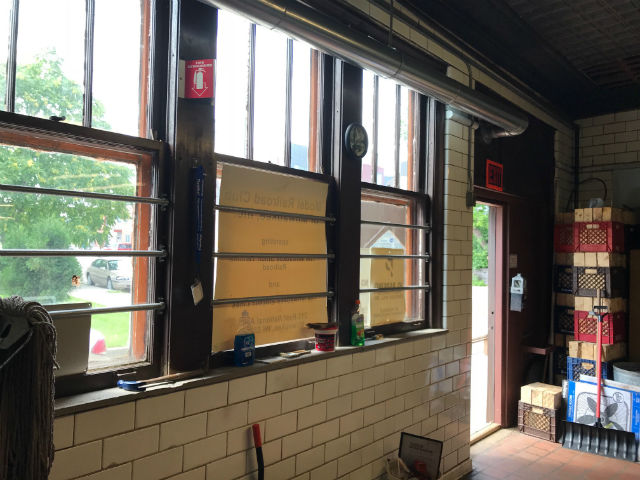 The old wooden station was the scene of a terrible crash on a frigid, blustery night in January 1916 when a Chicago-bound train rammed into the back of a another train headed to Madison (which would head out west via the tracks that passed through the Old Soldiers Home).

Five people were severely injured and another 20 or more were "shaken up and bruised," according to a newspaper account, when the Chicago train smashed halfway through the last car of the Madison one, setting off a blaze, "the cow catcher and boiler front cutting their way through floor and roof, and leaving behind them a mass of twisted iron beams and pipes after the heavy engine had been pulled out.

"Blinding smoke from engines and steam from exhausts driven down on the locomotive train by a 35 mph gale and in a 15 degrees below zero temperature, obstructing the view of Engineer A. Freisch of Milwaukee, was said Saturday morning to be the real cause of the accident at the Allis Station on Thursday, by officials who concluded the probe at midnight on Friday."

In May there was another accident as multiple Milwaukee Road refrigerator cars were damaged in a crash that snarled "passenger traffic considerably ... The accident happened with the train was speeding up the steep grade at the track elevation near the Allis Station.

"A weak draw bar or a broken hose caused a separation in the train. The cars in the rear, gathering impetus because of their heavier load, crashed into those cars attached to the locomotive, which, for the most part, were empty. A crew worked for more than six hours in clearing the tracks of the wreckage."

So, perhaps it was welcome news that October, when the Sentinel reported "the wooden structure on National Avenue now serving the Milwaukee Road as its Allis Station will be replaced by a modern concrete building costing $15,000." 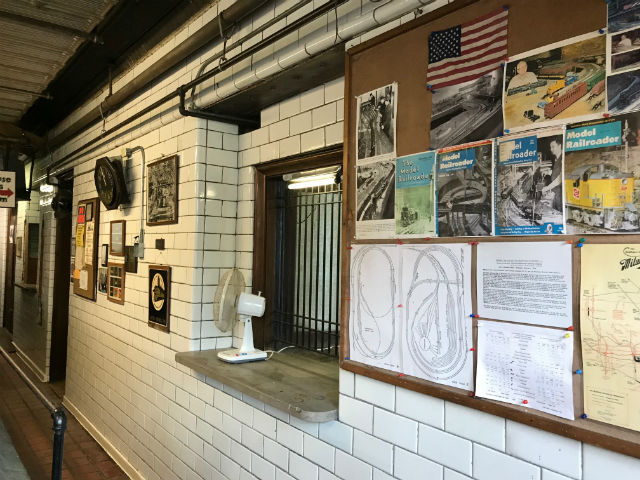 That station was part of a plan to raise the tracks up off street level, which presumably also helped eliminate what appeared to be a dangerously steep grade change.

Engineer H. C. Lothholz, who also did work for the Chicago, Milwaukee and St. Paul Railroad up in the Twin Cities, was tapped to design the concrete building, described by the Wisconsin Historical Society’s Architectural Inventory as an "astylistic utilitarian building."

But Lothholz couldn’t help adding some subtle nods toward exterior design with some pilasters and what is appears to be meant to resemble a cornice that runs all along the bridge ... all of it in concrete, and dated 1916 on the east side of the bridge. 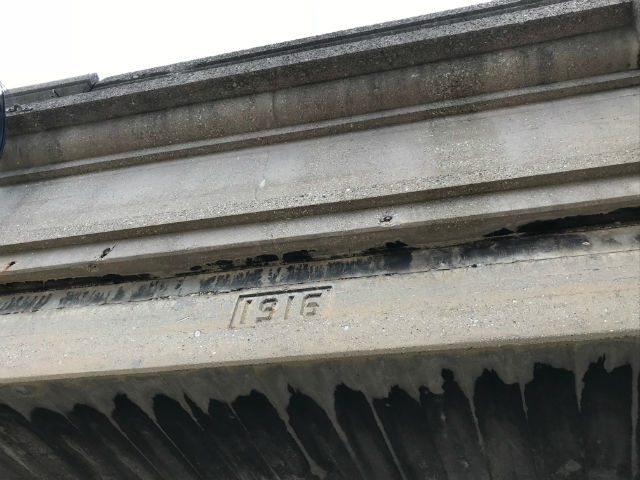 An adjacent section of concrete wall shows that work on the track bed and wall also took place a year earlier.

Work began sometime after Oct 16 that year and by the 24th much had been accomplished, including the concrete walls on the track elevation, which served as walls for the station waiting room below, where carpenters were already at work, concrete walls for the toilet room were being finished and steel was being erected up at track level for the shelter shed.

And work continued apace, thanks to notes made by city inspector Charles Hirsch.

On Nov. 8 floors were bring installed and within a week the walls were ready for lath. A week later the plaster work was underway. The second week of December the steamfitters were plying their trade, giving way to plumbers the following week. After a break for the holidays, the carpenters wrapped up before the new year.

The first week of January was spent finishing out the interior of the waiting room, the following week the tile (which is still there!) was being set in the stairways between the track and the waiting room and on Jan. 16, 1917, the Allis Station of the Chicago, Milwaukee and St. Paul Railroad was complete.

It was 41 feet at the front, 35 feet at the back and 66 feet deep, sitting on a five-foot deep foundation of earth and concrete.

The station had its entrance on the west facade of the waiting room tucked beneath the trestle, just off the sidewalk. A trio of windows opened into the ticket taker’s room and a series of windows ran under the viaduct along National Avenue. 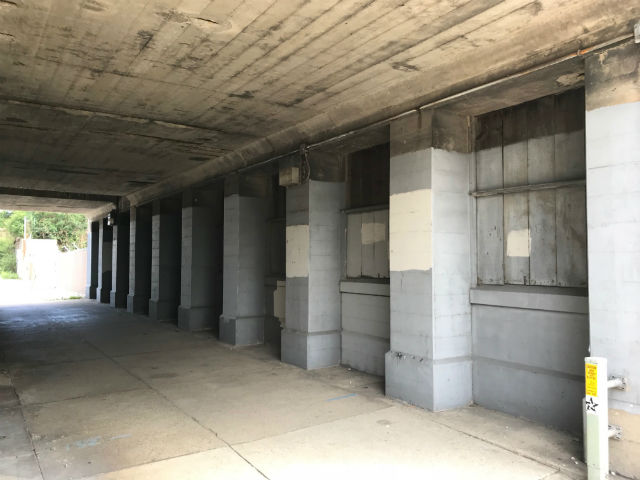 On the left side, at the end of a short passage that has a door into a storage space beneath the stairs, there is another room, whose use is unclear. The railroad club says its has original plans for the building but couldn’t rustle them up when I visited.

Straight back in the center of the room was the staircase up to the platform, of which there appear to be no traces remaining outside. 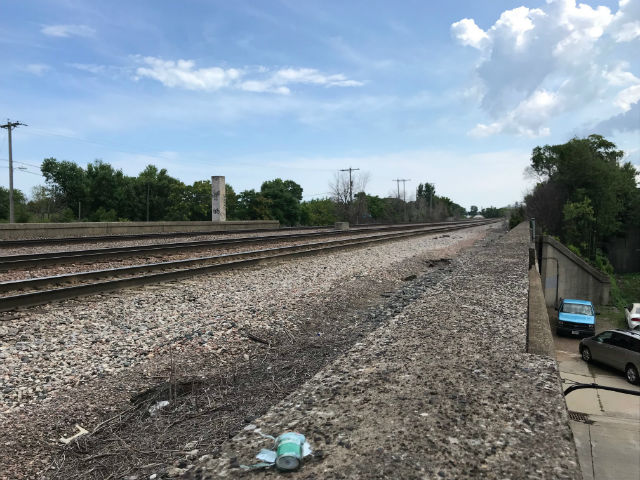 However, if you walk up the first set of stairs, you reach a landing where you can turn left, pull open a wood panel and see the next level headed up. But that’s as far as it goes, as it’s been covered up above that. 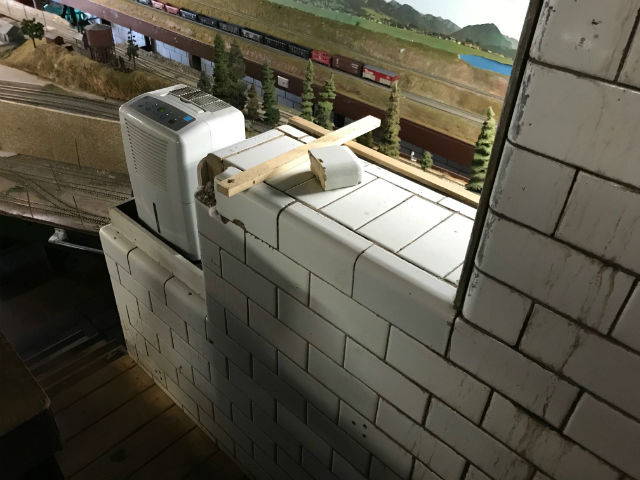 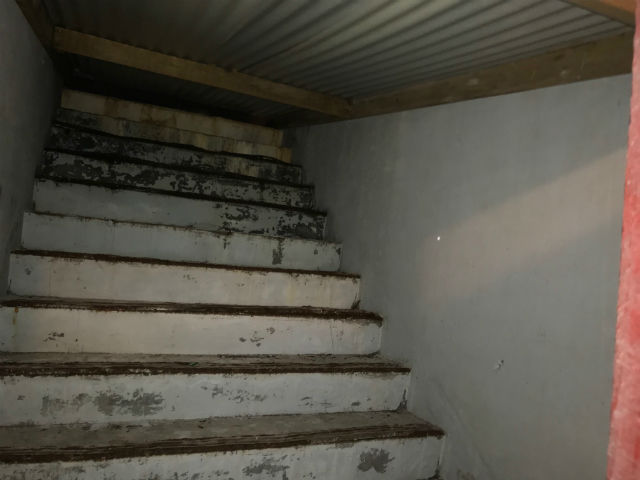 Up here you get a really close look at the gorgeous tin ceiling that survives throughout the building, in the waiting room, in the bathroom, in the ticket booth. Everywhere except the baggage room, where, perhaps, it was never even installed. 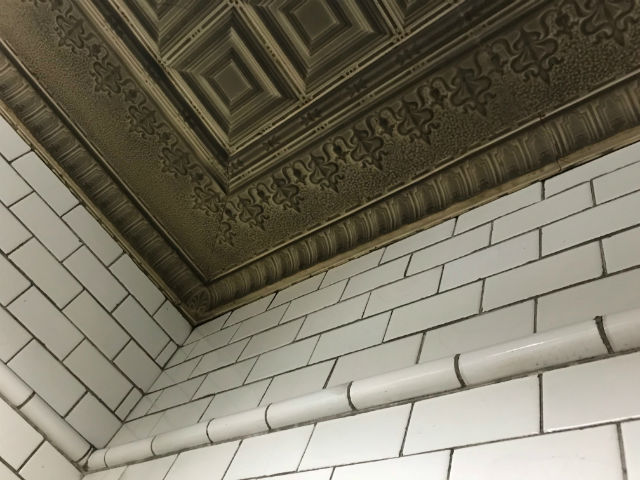 There’s utilitarian terracotta tiling on the floors but beautiful white subway tile on most of the other walls. 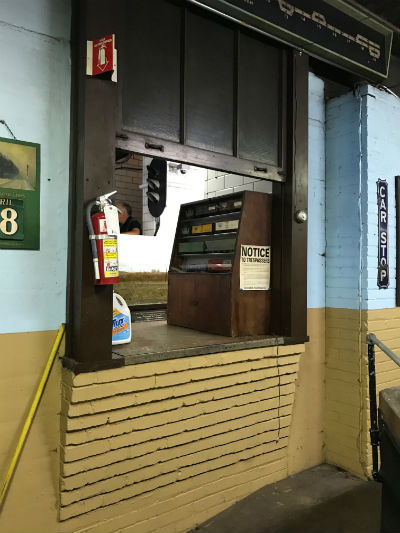 Inside the baggage room there are cabinets that appear to be original and beneath the baggage window, there’s some sturdy brick corbelling that you don’t see beneath the nearby ticket window. Bags, obviously, weighed more than tickets. 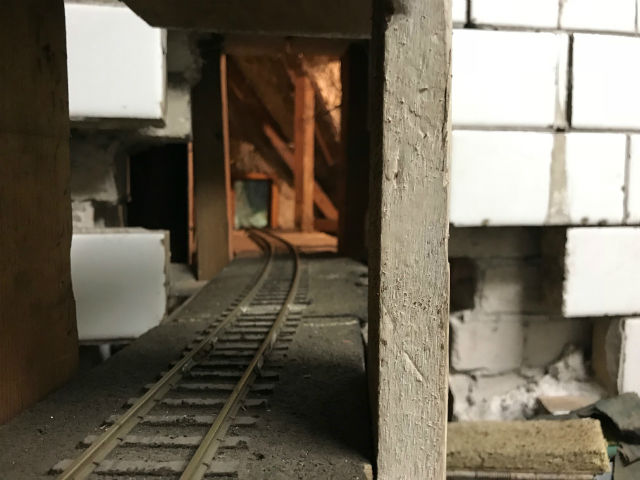 It’s a surprisingly preserved space – the holes broken through the subway tiled walls to allow for the passage of model trains notwithstanding – and one that really brings this almost hidden building’s original use to life. You can easily imagine walking in here and stepping up to the windows to do your business before taking a seat on a long wooden bench before climbing the stairs up to your arriving train.

But it didn’t serve passengers very long. After about a decade, the station closed and the waiting room sat empty for another 10 or so years until in 1936, then-owner the Milwaukee Road leased it to the Model Railroad Club of Milwaukee – co-founded by future Mayor Frank Zeidler! – as a temporary home.

Can 82 years still qualify as "temporary"?

When I ask club member George Edward if he and his colleagues appreciate the history of the building, he says that they’re grateful to have the place, first and foremost.

The structure is currently owned by CP Rail and the club remains there at the company’s pleasure.

"I appreciate the fact that it doesn't cost (anything) but quite frankly the location, the humidity and all that stuff is something we constantly battle with. But people that are gone now have actually given this to us and it's up to us to preserve it and keep it going as much as possible."

The club uses the space a couple times a month, in season because it’s not heated. The layouts are huge and, as you’d expect, expertly done. The day I stopped in, one club member was controlling the movement of the trains on the layouts from a tower installed on the steps up to the platform, while other club members kibbitzed in the ticket booth.

On days the door is open, it is truly open and anyone can stop in.

"Monday evenings are our usual gatherings to 'work' or just socialize," says Edward, who notes that the club has a month "afternoon operation session" on the last Sunday of each month.

The building will also be included in this year's Doors Open Milwaukee in September.

Stop in to see the model trains and layouts, but also to step back in time into what is most likely the city’s last visitable, somewhat preserved waiting room from the great era of passenger train travel.