Whether for the future or right now, the Aloft is doing A-OK

Standing out in front of the Aloft, the view is not optimal - but only for now. The new Bucks arena and entertainment district will soon be moving in, and as long as Aloft keeps up its cozy and cool ways, it should right in the middle of it.

Standing in front of the Aloft Downtown Milwaukee, located at 1230 N. Old World Third St., the view is not optimal – but only for now.

Since the modern, five-floor hotel opened in 2009, its most notable neighbor, arguably, has been a giant vacant lot: the Park East corridor.

For the past seven years, a tan and brown dusty metropolis desert has greeted visitors coming in and out of the shiny hotel’s front doors. But all of a sudden, that desolate, Fury Road-looking lot across the street has turned the Aloft into one of the more enviable locations in the entire city thanks to the impending new BelAir Cantina-esque Bucks arena and the Downtown entertainment district coming with it.

In two or three years, the hotel will be right in the heart of a hopefully bustling new Downtown epicenter rather than on what feels like the fringes of the city center right now, close to a lot without really feeling actually close to anything. Even in that current place, however, the Aloft makes for an A-OK staycation getaway.

Merely looking at the hotel from the outside, the first words that come to mind are small and slick; the Aloft seems squeezed snugly into its spot on the river, but it makes the most of the space. There’s a surprising number of rooms packed into the compact five-floor building – plus a bar, a pool, a small snack shop in the lobby, meeting and event spaces, and a gym.

Occasionally that makes things at the Aloft feel a little tight: Take, for instance, the lobby. After pulling up – since there’s no real on-site parking lot, the valet service ($27 added to the room) is pretty much a must – the first glimpse inside the hotel is a bit overwhelming.

There’s the front desk, off to the right – not set up like an alcove against a wall as with most hotels I’ve been to but instead like a help desk, an island drifted in the middle of the lobby – and the bar and the lounge in the back and the little snack store and shelves and some TVs and a fireplace and a newscrawl and a pool table. Even the elevators have big wordy ads for the hotel’s key-free app service taped to the inside of the doors.

It’s a surprisingly cluttered intro to an otherwise cool, streamlined hotel experience. An easy mild fix might be paneling the ceiling, as the exposed ducts and such clash a bit with the more clean and colorful modern design and aesthetic. 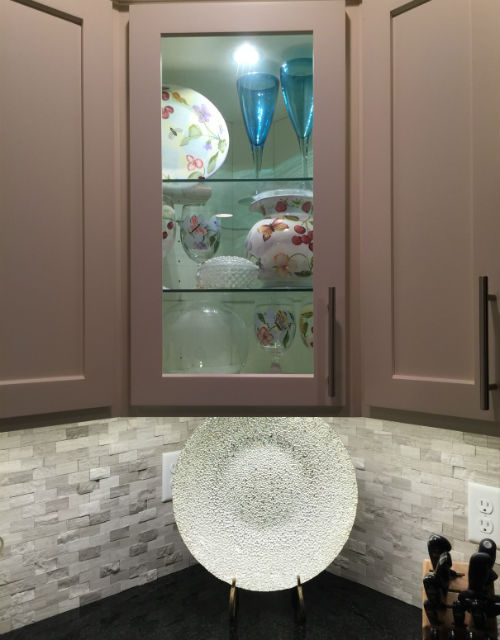 After checking in with the inviting and helpful desk assistant – who not only kindly accepted my just-expired gift certificate but also rolled smoothly along with the fact that I’d forgotten to say I was using said gift certificate when booking the room over the phone, doing her best to make me not feel like THAT customer even though I totally felt like THAT customer – I headed up to my room: a king room, the smallest of the hotel’s three varieties, that nicely balanced the line between modern and comfortable. Again, it felt a little tight – the arrangement of the room didn’t provide much walking around space – but for one or two people, it leaned pleasantly more toward cozy rather than cramped.

Much of that is due to the design and décor. The bed area was based around a wood-toned wall and headboard – complete with a splash of some modern art and some nifty little personal overhead lights on each side – while the rest of the room was warmly hued with splashes of color from some rainbow-like stripes, a consistent theme throughout the hotel.

There was a pleasant desk area set up against one of the two windows (my particular room’s view wasn’t great, overlooking the closed-in patio area, but with a better view, it’d make a rather nice work station) and the bathroom was outfitted slickly with glass shower doors and a fancy raised bowl sink. Its finest feature, however? A shower that was simple to turn on and find the right temperature without feeling like you needed a manual or accidentally scalding/freezing yourself. That’s worth a five-star Yelp rating alone in my (admittedly easy-to-impress) book. 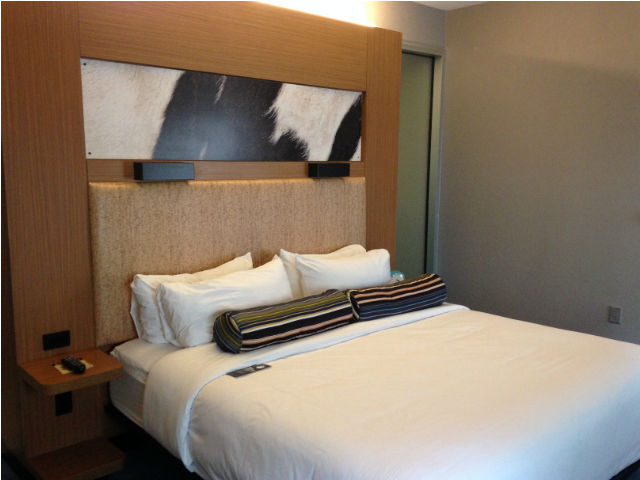 Overall, the room managed a careful, comfortable balance of feeling sleekly chic and modern while still homey and warm, a satisfying combination that continued down into the Aloft’s in-house bar, the unfortunately titled w xyz lounge – or is it W Xyz? Just XYZ? No matter the case, who’s going to really call it that?

Convoluted names aside, it’s a nice, cool and cozy little hangout. At first glance, the bar looks fairly tiny, with the bar itself – niftily decorated dark grey with shimmering, color-changing lights embedded on top – maybe having room for ten people at most. However, the open space invites people to spread out, either to the lounge – where occasional live music performances take place – or to the pool table. Even though it wasn’t divided from the rest of the lobby – which felt less hectic with the lights dimmed a bit – it truly felt like a lounge, and combine that with the attentive bar staff and the once again chic yet comfy décor – clean colors and textures, a backlit backbar – w xyz or whatever it’s called made for a cool, comfortable night, both on the town yet staying in. 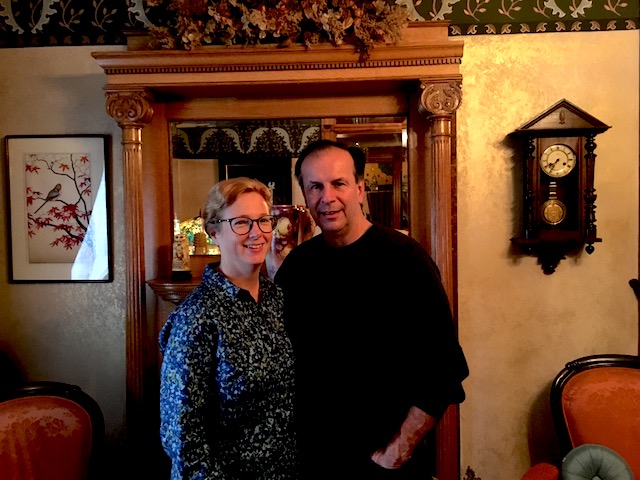 Of course, if one wants to actually head out on the town, Aloft isn’t far from much. Even though it feels like it’s a bit on the fringes, Old World Third Street and Water Street are just a quick jaunt away, with Brady Street, the Pabst Brewery and the rest of Downtown not much further.

The real destination, however, is what’s going to be shortly next door, an entertainment venue that will hopefully move the Aloft from the fringes to the frontier. And as long as the hotel keeps up what it’s doing now – providing a cool, comfortable location for travelers from both near and far to hang out, hibernate or maybe a little of both – it should be thriving right in the middle of it all.

So I guess that view from out front of the Aloft actually looks pretty great after all.