It's eye-opening to consider how Belgium became famous for the creation of fine chocolate when the primary ingredients needed to make it are grown more than 3,000 miles away. And those are exactly the sorts of cultural insights being mined by a new program at Alverno College called Foodie Adventure.

They say that the best way to get to know a place is to eat its food. And that’s overwhelmingly true.

Ingredients grown in a place reflect the geography and climate. The types of food that are most affordable in an area often reflect both economic and political circumstances. Meanwhile, the cultural influences of a particular dish – be it chicken tikka masala or Native American fry bread – are almost always accompanied by a rich (and sometimes complicated) historical context.

There’s a reason why black pepper – an ingredient first cultivated in Asia – became a critical part of European cuisine. And it's eye-opening to consider how Belgium became famous for creating fine chocolate when the primary ingredients needed to make it are grown more than 3,000 miles away.

And those are exactly the sorts of cultural insights being mined by a new program at Alverno College called Foodie Adventure.

The program – which engages students in conversational dinners focused on ethnic cuisine – was launched last fall by Alverno College’s Department of Student Activities & Leadership. The aim was to expose students to various parts of the city while introducing them to experiences and cultures with which they might be unfamiliar.

"We’re really using food to get students to think about the role food plays in various communities, the history behind the food and the culture that produces it," says Brooke Wegner, director of student activities and leadership at Alverno College. "We’re also trying to get them comfortable with exploring diverse neighborhoods and seeking out new experiences." 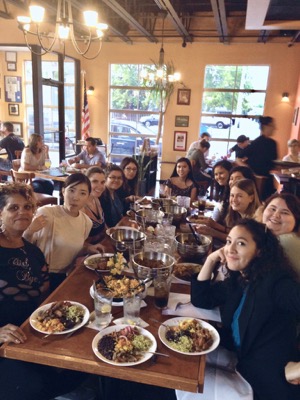 Three Foodie Adventures are offered each semester, and each takes place at a different ethnic restaurant in the Milwaukee area including spots like Antigua, Casablanca, Pho Cali, Irie Zulu or The Cheel.

Menus are set before each event, offering students the opportunity to try numerous dishes, many of which they may never have had before. Maybe more importantly, they're invited engage in conversation about what they’re eating and experiencing.

During some events, the restaurant's chef or owner might engage the students in conversations about ingredients, culinary techniques and the cultural significance of specific dishes. Meanwhile, accompanying faculty and staff add social, cultural and historical context to the conversations, based on their individual areas of expertise.

"When we went to Casablanca, we brought a history professor with us," says Wegner. "At Antigua, there was a Spanish language instructor. And when we went to Irie Zulu, someone from our International Intercultural Department was part of the discussion. Sometimes there's a short activity or assignment, but the goal is always to provoke a lively discussion."

Sometimes the attendees themselves become an active source for insightful information about culture or cuisine.

"During our trip to Pho Cali, one of the attendees was a Sister of St. Francis who is currently studying abroad at Alverno," says Wegner. "She’s originally from Vietnam, so she offered insights on the food from a very different perspective."

Wegner says that the Food Adventure program is not only a fun way for students to experience the culinary side of Milwaukee, it’s also an initiative that intentionally pulls students outside their comfort zones, cultivating skills in social interaction, aesthetic engagement and the development of a more global perspective.

For some, it’s an experience that takes the intimidation factor out of trying something new.

"It’s always hard to take risks at new places because you never know what to expect," says Alma, a student who attended a Foodie Adventure this past fall. "This experience allows you to take those risks with more than one person, plus you get more variety in choices of food."

Others glean insights about the versatility of ingredients and their use across a variety of cuisines.

"I was surprised that Peruvians used cilantro in their cooking," noted a student named Sarai. "I primarily associate that herb with being a garnish for Mexican food!"

Still others gain intercultural competencies as they learn about traditions and social customs that accompany the act of dining.

"One thing I learned was that it is very important to break the bread with someone ... " noted Marisol after her experience at Casablanca. "It is almost a sign of respect and friendship in their culture."

In most cases, the Foodie Adventure is an experience that leaves them hungry to learn even more.

"After this experience I have found myself researching more restaurants and being
curious about what cultural foods are available near me," noted Citlali on her survey. "I have even made plans and lists of places to visit, including restaurants, festivals, and home visits."

Cecilia felt similarly. "I am from Milwaukee, however, on a daily basis I pass by places that I have never been to. This restaurant visit does make me want to experience more cultural places and foods."