Andra Day rises to the occasion with soul-baring Summerfest set

Andra Day may not yet be a household name, but after her Summerfest debut Wednesday evening at the BMO Harris Pavilion, there’s little doubt in my mind that her time is coming.

It helps that she’s had support from legends like Stevie Wonder, whose (now ex-) wife Kai Millard Morris passed along a YouTube video to him of Day singing in front of a strip mall, setting off a chain of events that would lead – albeit six years later – to a Grammy-nominated debut album, "Cheers to the Fall."

Day’s sound is both classic and contemporary. Her passionate vocals evoke the spirit of greats like Aretha Franklin, as well as contemporary revivalist acts, including the late Amy Winehouse and Adele. And her dedication to her craft has landed her key performances, such as a stint at the White House, a spot in an Apple commercial with Stevie Wonder and a performance alongside Ellie Goulding at the 2016 Grammy Awards.

And despite a relatively sparse crowd at the Pavilion, her hour-long Summerfest set offered Milwaukeeans a solid look at both her vocal chops and inviting personality.

Decked out in a gold jumpsuit and a Chieftains team jacket, the 31-year-old opened the night with the soaring "Forever Mine," a sirenic anthem that offered up a pleasant juxtaposition against the roaring sounds of classic rock pouring out of the Marcus Amphitheater.

From there, she moved easily into the equally emotional "Gold," in which she frankly depicts the shadows of her past infidelities.

"I like to pay tribute to artists who paved the way before us," she noted. "And this song is as relevant today as it was 60 years ago."

And with that, Day launched into a passionate version of Nina Simone’s "Mississippi Goddamn." Taking it on as her own, she tackled the pivotal civil rights anthem with a mixture of passion, respect and righteous anger. 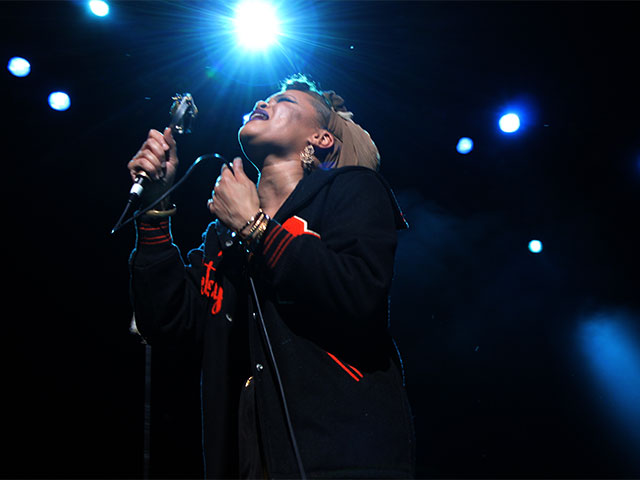 Throughout the evening, Day's voice was deeply expressive and masterfully controlled. Maybe more notably, she exhibited the rare ability to transition from soulful R&B masterpieces into hip-hop cadences and jazz improvisation all in the same show.

But her singing wasn’t the only aspect of her performance that deserves mention. Naturally charismatic, she was also eloquent and genuine in her dealings with the crowd, her stage presence creating an intimacy rarely found between performer and audience.

Day describes her album as autobiographical, a claim that might seem trite if it weren’t for the beautifully raw vulnerability evident in the performance of songs like "Rearview" and "Red Flags," which conjured her darkness and pain in a manner reminiscent of Billie Holiday. 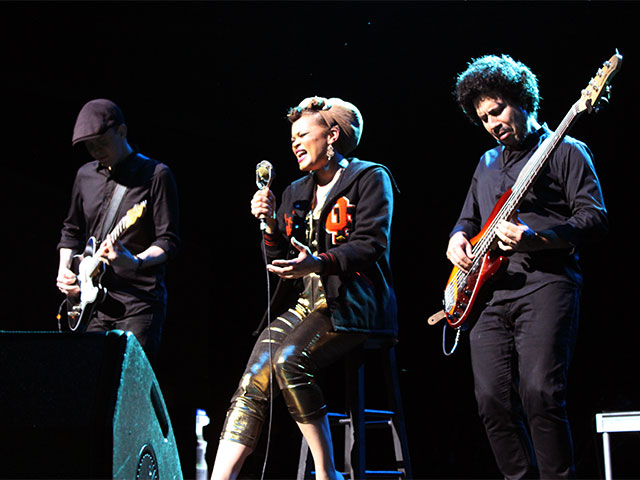 In between original compositions, she entertained the crowd with well-executed covers that artfully conjured the spirits of their original artists while bearing a distinctive "Andra Day" stamp. Her talent for creative arrangements came through in a medley of Bob Marley hits. Meanwhile, her jazz-inspired cover of Kendrick Lamar’s "No Make-Up (Her Vice)" took on new meaning as she deftly tackled the topic of self-acceptance.

"I always felt more comfortable with a full face of makeup," she said, describing fears about her self-image as a younger woman.

"But the more secure I became, the more I set aside those things," she went on, rubbing off the remains of her makeup right there on stage.

"I hope these wipes work, cuz this stuff is crazy," she noted with a chuckle.

The emotional centerpiece of her set was her hit "Rise Up," before which she set the crowd in motion with a direct appeal.

"Music is a gift from God and can be a tool, an entity for healing," she said. "People struggling with hopelessness, anxiety, depression – these are real issues. Let's commit to joy. Don't just sing this song to uplift yourself. Uplift others."

And as she spoke and then began to sing, people stood up from their seats. Men and women cheered. And I found myself growing bleary-eyed as those clean, clear notes rang from her vocal chords, prompting the raising of arms and the swaying of collective hips.

I rise up! #AndraDay #Summerfest

Of course, there’s nothing like a Queen cover to end just about any concert – though show me a performer who can knock out a version of "I Want it All" with more effect than Day, and I’d be shocked.

A crowd that was formerly sedate and serious had become a cheering mass. And Day smiled wide and genuinely as she exited the stage, leaving a frenzy of guitar licks and percussion in her wake.