Adults seem to love the LEGO Architecture series of kits as much as kids - maybe more. If enough people vote in support, Vida Andras' MAM Calatrava model might join the series.

Adults seem to love the LEGO Architecture series of kits as much as kids – maybe more. And it's easy to see why. These amazing little models of landmarks like the Seattle Space Needle, the U.S. Capitol, miniature Venice and the Eiffel Tower, are sleek and modern-looking, often in stark white or black bricks.

Those white LEGOs are perfect for rendering works by Santiago Calarava, including the Quadracci Pavilion the Spanish architect designed for the Milwaukee Art Museum.

Brickmaster Vida Andras, an artist from Budapest, has created a LEGO Calatrava that he hopes will be added to the LEGO Architecture series, and he posted this evocative video showing his version, which is extremely detailed and authentic, including the staircase with its railings running up the middle, between the brise soleil wings.

"I was really excited to try and represent Santiago Calatrava's Milwaukee Art Museum pavilion in LEGO," wrote Andras when he posted the video on YouTube. "I was always fascinated about the architectural language Calatrava is using. Trying to represent the beautiful curves and lines from the real building was challenging, but after some structure tests and shape studies, I arrived at my build. 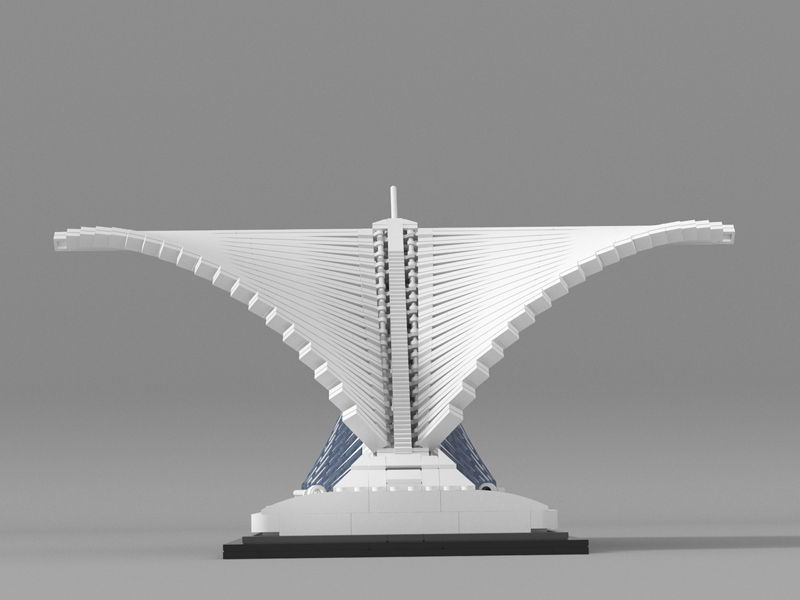 "My ultimate goal was to make it a real Lego set so anybody can build it. It wouldn't be difficult to build, and it serves as a really nice decoration piece. I honestly think adults can enjoy the presence of it as well as children."
The project has been posted on the LEGO Ideas web site and has garnered support from more than 750 voters so far, with 322 days left to vote. You can go to the site here and log in to vote to have the Milwaukee Art Museum added to the LEGO Architecture series.

"I'm really happy that LEGO gives us this opportunity, and after a great success at LEGO Rebrick, I'm happy to present it as a possible set piece," Andreas wrote. "It would make a beautiful addition to the already amazing models, it has a various mix of bricks for future creativity, and possibly inspiring to young and older people, as well."