Recently, I went back for a look at the finished Arts @ Large headquarters, completed last summer, and what an overhaul and new life the building at 1100 S. 5th St. ï¿½" built as a retail and apartment building for meat magnate Patrick Cudahy in 1891 ï¿½" has gotten.

After visiting the three-story future home of Arts @ Large in Walker’s Point three years ago, I wrote, "There are few things more satisfying to me than seeing a beautiful old – and vacant – building get an overhaul and a new life with a new owner. When that new owner is a Milwaukee nonprofit that works every day to improve the lives of MPS students? Double bonus."

Recently, I went back for a look at the finished project, completed last summer, and what an overhaul and new life the building at 1100 S. 5th St. – built as a retail and apartment building for meat magnate Patrick Cudahy in 1891 – has gotten.

You can read about the building’s history and see "before" photos here.

The project was designed by the Kubala Washatko Architects and built by Catalyst Construction, with some help from student interns from nearby Bradley Tech High School. 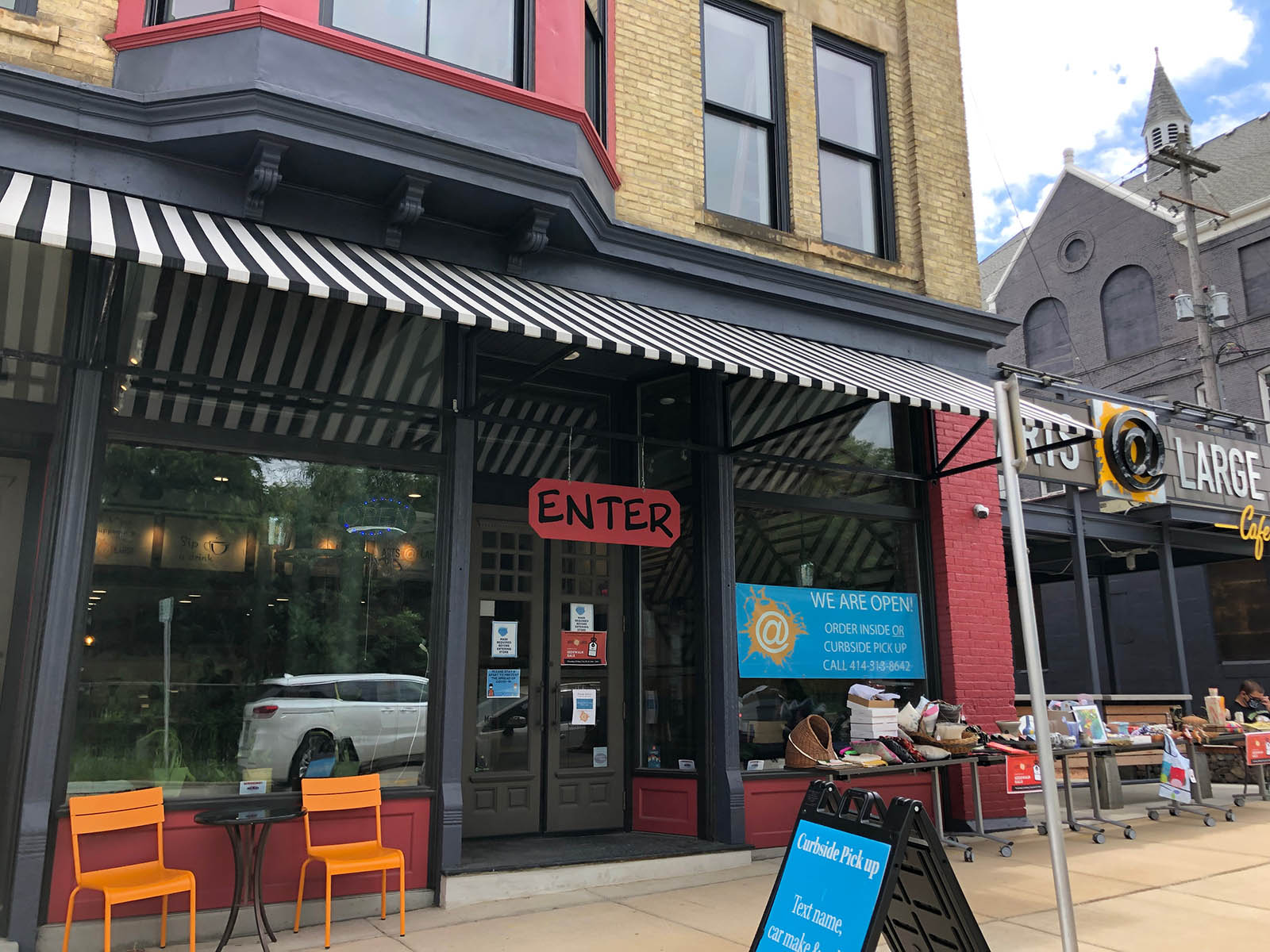 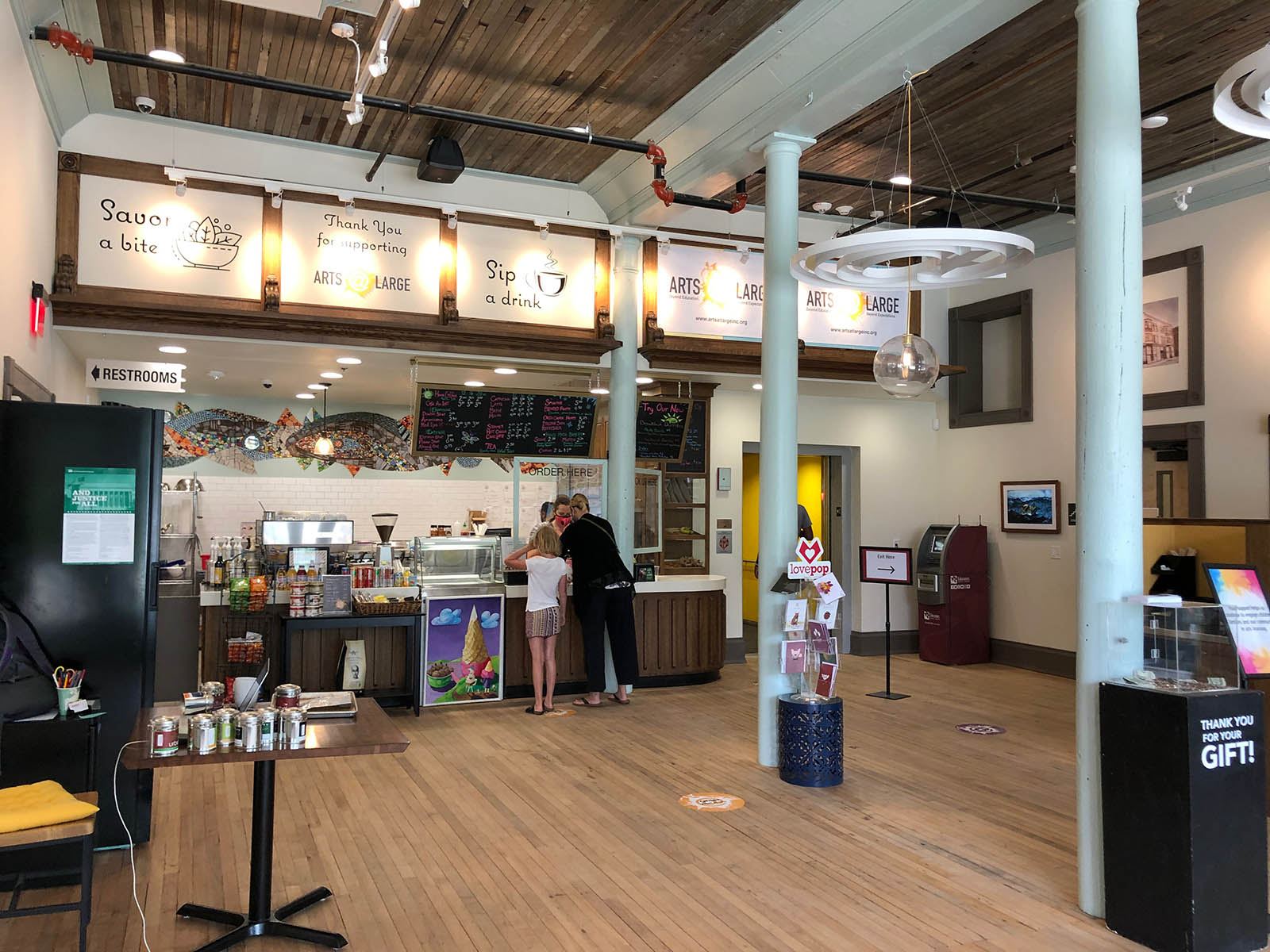 It includes a full-service cafe at street level, along with a large multipurpose space for performances and other events. There’s also a meeting space and a new mezzanine with a lending library.

The lower level has a shop for those student interns.

Upstairs are art studios, Arts @ Large’s offices and spaces that are rented to a variety of nonprofit tenants, including ReFlo and poet laureate Margaret Rozga. Rozga’s space also serves as a small apartment where visiting artists can stay.

Everything gleams like new – even the original elements like hardwood floors, millwork and hand-hewn beams that support the building and can especially be seen up close in the mezzanine. 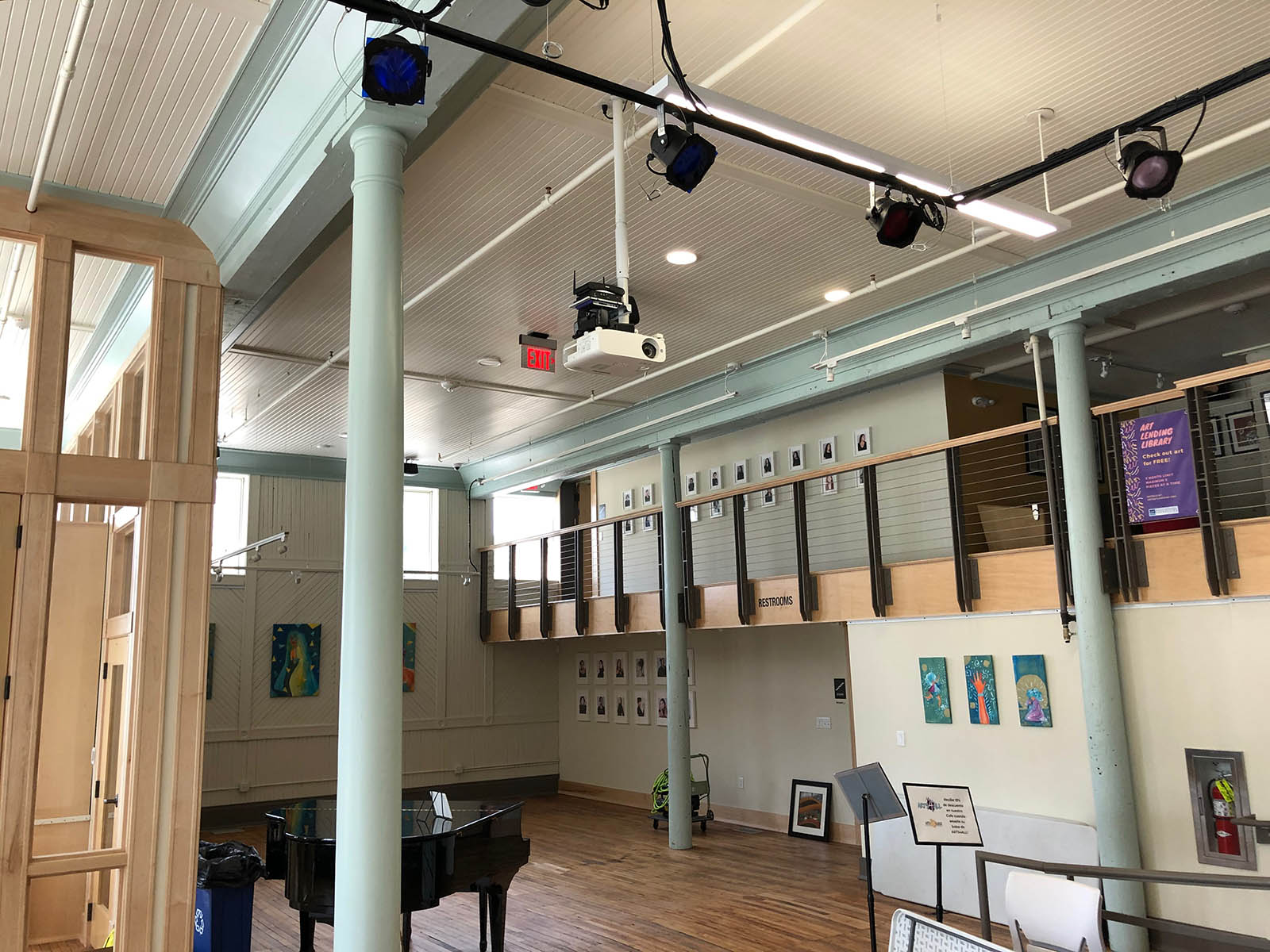 "It was challenging and the timeline was really aggressive," says Sean Kiebzak, interim CEO of Arts @ Large, which provides art programming and professional development for teachers at dozens of Milwaukee Public Schools and also offers community art programs.

The cafe is also staffed by students who are learning the ins and outs of retail and food service.

"But, you can see the results of the hard work that was put into the project. It speaks to the partnerships that we have going into this with Catalyst Construction and the Kubala Washatko Architects. It's a beautiful building."

Because of the project’s use of historic tax credits, Arts @ Large had to get permission to make any changes and was required to keep as much of the original building and its detail as possible. 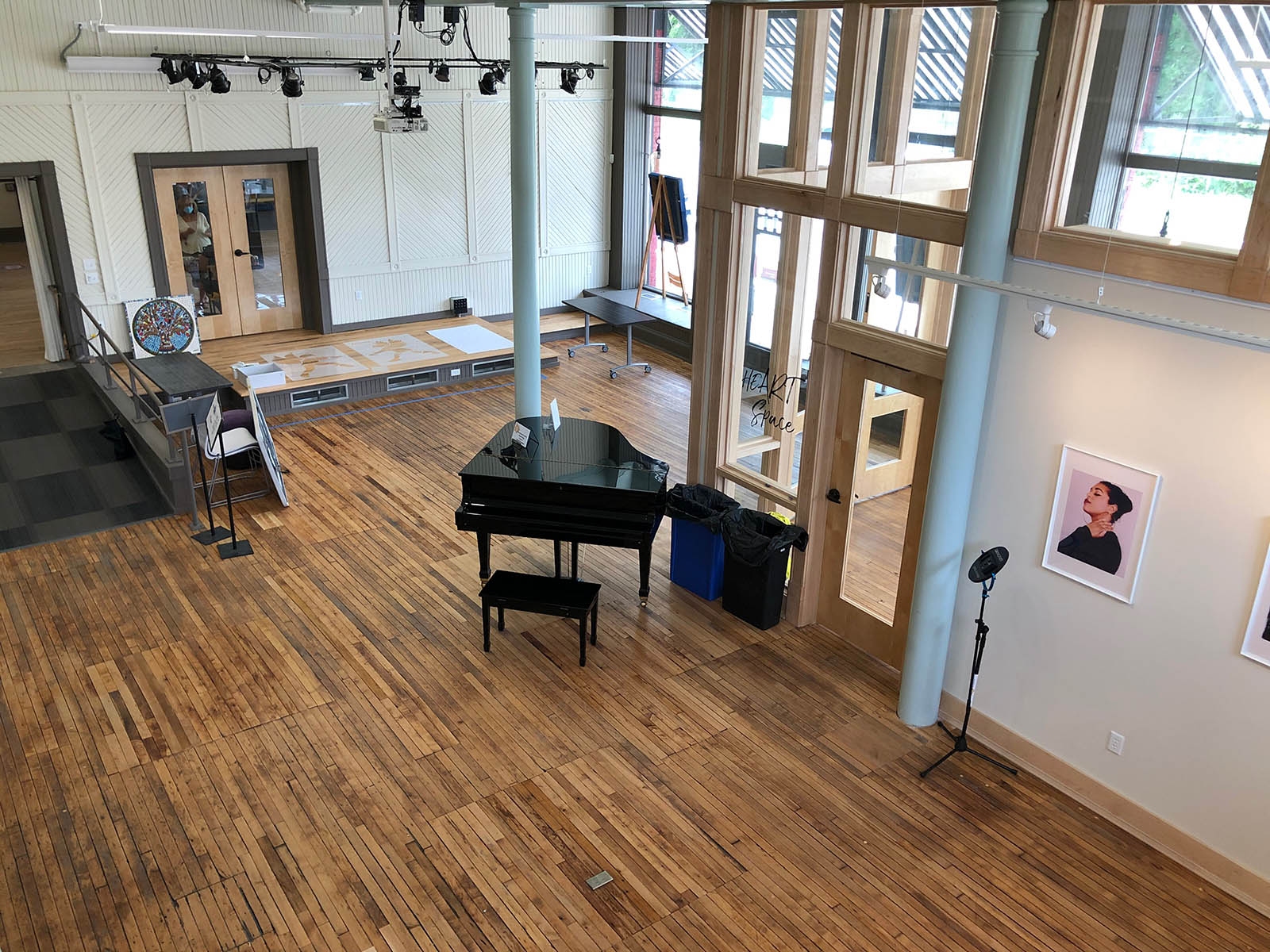 The result is that while the its shiny and new and serves as a beacon of life on a corner that once looked tired and run-down, it still looks like the building that Cudahy built and which served for years as The Polish House social center and later as a home to So-Lite neon sign manufacturer.

"All of the beadboard is original, I think 95 percent of the flooring is," says Kiebzak. "We were able to retain a really high percentage of the trimwork. They had to replace a couple of the columns and you can see the differences because we received historic tax credits, so we had to be really careful to not to falsify history and make it very clear differentiation between old and new."

Unsurprisingly, though the turnaround was a quick one, it wasn’t as quick as had been hoped. 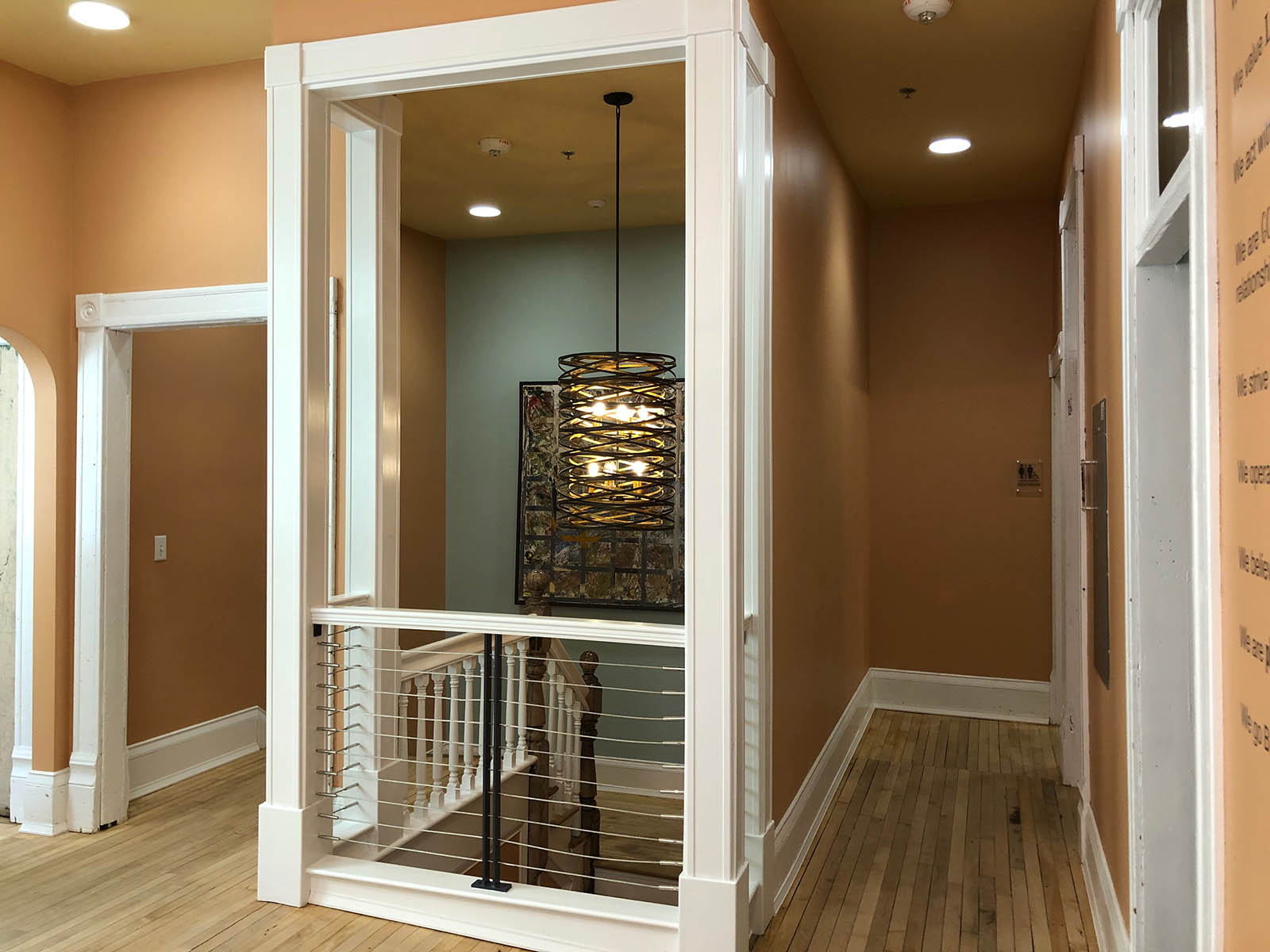 "We were supposed to be finished by Dec. 31, 2018," says Arts @ Large’s Director of Operations Kylee Spillane. "We moved in in May and they were not done. The floors weren’t done.

"We moved in on Tuesday and our gala was Friday. And if you were to have come in here the morning of the gala, it looked like a construction site. Then from that morning until like 7 that evening, the transformation that was made just to get this space ready was amazing."

These days, although the cafe is open, much of what Arts @ Large does is taking place virtually, including summer art programs for kids, teacher professional development and even exhibitions and other events.

"It was an art community center, the Polish House," says Kiebzak, "and being able to come full circle by bringing people back into the space to really celebrate the community and the work that we do through the arts is really special."

The offices and rental spaces are upstairs, along with one multipurpose space that is, by itself, basically the size of Arts @ Large’s previous home just up 5th Street. 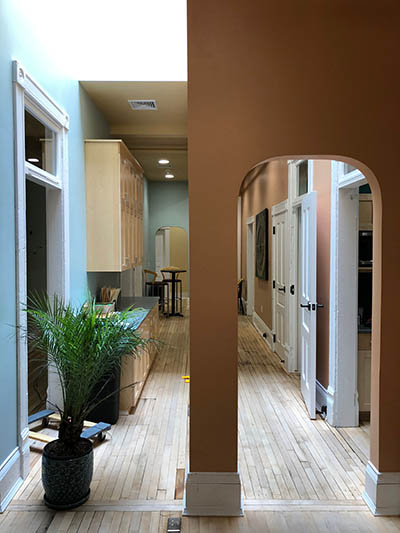 "We have Reflo Sustainable Water Solutions, Legacy of Home Health Services, Wisconsin Reading Corps, Milwaukee Preservation Alliance (as tenants)," says Spillane, "and then Wisconsin poet laureate Margaret Rozga. It's really been kind of a fun learning experience for us to have tenants in here and just figuring out.

"There are just so many more people here to collaborate with, run into, see how things are going, help cross-market things."

Each of the tenants has signed a three-year lease with Arts @ Large, says Spillane, who is energized by the possibilities for collaboration that the renters bring.

"Even though they may be a good fit, some may outgrow the space," she says. "Some may stay and that is fantastic and we will find new ways to work together. But, some may move on and that will give us an opportunity to find another smaller organization that we can help, but then they can also help us kind of listen to new ideas."

Despite the fact that the new place is many times large than its previous space, which also had a cafe, in a former tavern, both Kiebzak and Spillane have found that it they could still use more.

"We definitely maximize all of the space that we had available to us, but I wish we had more space," Kiebzak says. "It filled up so quickly and we were like, ‘man, we could use a few more rooms or a few more office spaces. Some more storage space’."

"Like a few more closets," adds Spillane. "That would be great."