Kavon Cortez Jones builds his adult life, one poetry book at a time

Twenty-two-year-old Kavon Cortez Jones sold 250 copies of his poetry book, "Club Noir," and - along with other jobs - was able to buy himself a phone and move out of his mom's Harambee home.

Every day, Kavon Cortez Jones discovers a new word via Dictionary.com. On the morning of our interview, he had just learned the meaning of "emolument," which, for the record, means "profit, salary, or fees from office or employment."

"This made perfect sense to me because I got paid today from Beans & Barley," says Jones, who works at the East Side institution as a dishwasher.

However, most of the money he made in 2016 – which was enough to move out of his mom’s house in Harambee and buy himself a pair of glasses he actually liked and a non-government phone – came from sales from his poetry book, called "Club Noir."

The 52-page, self-published collection features poems from 2012 to 2016 about Milwaukee, Paris, New Orleans, Chicago and more. Since September, he has sold about 250 books at $50 each.

"I don't know if people buy my books because I'm poor and young and black or because I'm really good at what I do," Jones says. "But at the same time they’re buying it because they know me and they want to support me. But I’m paranoid sometimes."

High points of the book include his ability to artistically share his life growing up on Milwaukee’s North Side with poems like "Friiied Chickennnn," but he also writes in the first person as Vincent Van Gogh in "Starry Night" and tributes Jimi Hendrix in "Pink Elephant Night" and Prince in "Club Noir."

"Club Noir" is not available online or in bookstores, but Jones always has a bunch of copies in his backpack. Visit his Facebook page to find out how to get one.

Putting out a book of poetry was a new experience for Jones, who is best known for his live spoken word performances. Since graduating from Riverside High School four years ago, he has performed between 250 and 300 times at venues all over Milwaukee and beyond.

"I mostly perform for free – I love doing stuff for free, especially for kids, but I’m also trying to make money so I can feel more like an adult," Jones says.

Experiencing Jones perform live is an invigorating experience. His words, rhythm, voice and stage presence combine into a performance that’s professional and skilled and with every show he gets even better. One of the amazing aspects of his performances is Jones’ ability to memorize so many words and to offer them flawlessly, without a stumble or glitch. 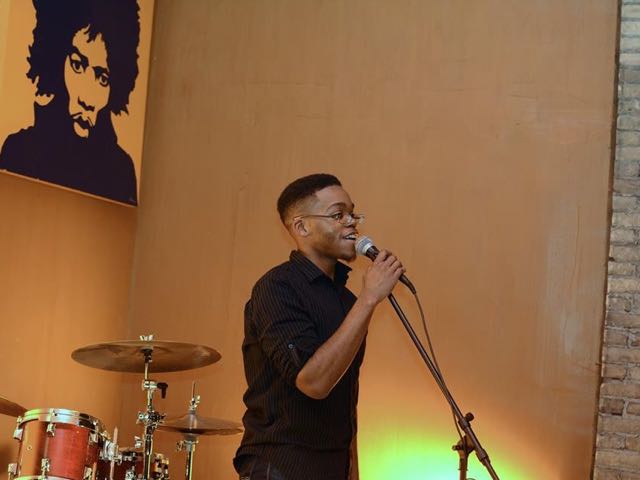 "I can memorize an 8-minute monologue in a couple of hours," says Jones. "I recommend you
read a poem 10 times before you go to sleep. Five times in your head and five times out loud and when you wake up, you're gonna know that poem."

During his live performances, Jones likes to challenge the audience about many issues, including race. "I address a lot of white audiences," he says.

"I’ve read a lot of Billy Collins and Walt Whitman and Charles Bukowski," Jones says. "I just spent the last couple of days sitting in the East Side Library and reading Bukowski. I wrote down a lot of his quotes. He is really funny."

Originally, Jones performed under the name "KJ Progidy" but recently started to bill himself by his legal name, Kavon Cortez Jones.

"I wanted people to see me more as a real person, not as this poet named KJ Progidy," says Jones.

Jones, who is a student in the Milwaukee Area Technical College’s Promise Program, started writing when he was 13 years old and attending Dr. Martin Luther King Elementary School. Poets and activists Muhibb Dyer and Kwabena Nixon provided a poetry workshop for Jones’ class and he was immediately inspired.

He went on to join The Poetry Club at Riverside High School and compete locally and nationally. "It was very good for me," he says. "When I started I was 15 and introverted."

This summer, Jones planes to release a second short book called "Nostalgia" and eventually, another full-length book. For now, he’s adjusting to being on his own, going to college, holding down a job, being a spoken word performer and creating new and powerful relationships.

"I’ve built up a family of people outside my family – my friends who really see me as a person," says Jones. "That’s why I went back to my ‘real’ name. It connects deeper to my heart."