Do you recognize the woman in this B. Artin Haig portrait?

Once in a while, during visits to places around town for Urban Spelunking stories, I come across unexpected things. Like the photo you see here. Do you know who she is?

Once in a while, during visits to places around town for Urban Spelunking stories, I come across unexpected things.

Take, for example, the old wedding portrait hanging in a vacant apartment full of junk in complete disarray above a former grocery store and bakery on Burleigh Street, that is currently for sale by the City of Milwaukee’s Department of City Development.

Something about the soft focus pale sepia-tone image seemed wildly out of place; the glamorous woman with the hopeful smile in a room empty except for discarded junk.

I checked the back to see if there was any info – there was not – and I took a photo of the framed photograph and then a close-up of the photographer’s name on the bottom right corner. 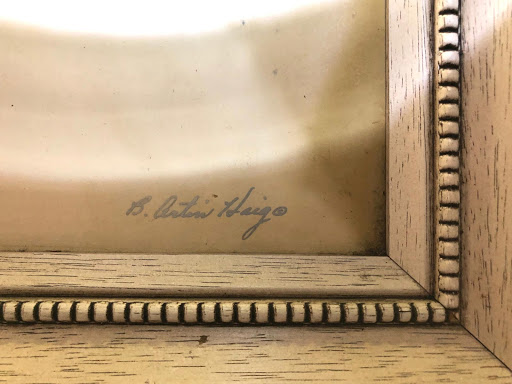 When I got back to the office, I did a web search on the name of the photographer – B. Artin Haig – and was surprised by what I found.

Haig, it turns out, died this past March. He was 104 years old (just five months short of 105!) and if that wasn’t amazing enough, he was an orphaned survivor of the Armenian genocide, came to America in 1924 after living for a while in Marseilles and Buenos Aires – at the age of 10 – and learned photography from a cousins in New York with a photo studio.

Plus, a big baseball fan, he was old enough to have seen Lou Gehrig and Babe Ruth play ... in person at Yankee Stadium.

AND, in the late 1930s, he moved to Washington D.C. to wrok as a White House photographer, during which time he shot images of President Franklin D. Roosevelt.

In 1954, after living for a time in Dallas, Haig – who was born Haig Artin Kojababian and went by the nickname Bob – came to Milwaukee and set up a portrait studio on East Wisconsin Avenue, across the street from The Pfister and it is perhaps there that the wedding photo was taken.

Haig continued to work as a photographer into his 90s and over his career he captured the faces of hundreds, if not thousands, of Milwaukeeans, including the one you see above.

If you recognize the face, please send me an email. At my request, the Department of City Development has taken the photo out of the building and it is now in an office Downtown, awaiting a potential return to the family of the woman pictured, or to Haig’s family.

Alas, the photo was found just months too late to ask Bob himself about it.