A happy Labor Day to everyone out there - including "Bachelor in Paradise," which made like every other American and took the day off. Sure, there was a full episode on Monday night, but it sure didn't feel like a full effort.

A happy Labor Day to everyone out there – including "Bachelor in Paradise," which made like every other American and took the day off. Sure, there was a full episode on Monday night, but it sure didn't feel like a full effort, instead delivering an episode of dull and played-out drama. It's never a particularly good thing when the most entertaining and notable part of the show is what was going on in the background of an important conversation.

The last time we were on the beach, Angela had just arrived to turn Clay's life into a living hell because Chris Harrison is a cruel and devious god. Why anyone trusts that man to value their happy relationship over petty televised drama is beyond me but GOD BLESS HIM FOR IT. Clay looks utterly terrified, but less because he's concerned she's going to go for him and wreck his stable relationship with Nicole – after all, she takes Mike and others aside to talk about her date card, not Clay – and more because he just doesn't want to be on a beach stuck hanging out with his ex-girlfriend and watching her date around. Seems fair!

Nicole and Angela talk out their beef like responsible adults, with Nicole asking Angela to respect her relationship with Clay and Angela saying that she will because "I'm not a drama person." INDEED, THAT'S WHY I SHOWED UP ON THE SAME DATING SHOW AS MY EX WHILE HE WAS IN THE MIDST OF A HAPPY RELATIONSHIP; NO DRAMA HERE! Angela keeps saying it's only fair that she gets to go to "Paradise" and date around if Clay's moved on too, which yes, totally true ... but not when it seems like you did it as some revenge stunt after you saw Clay was already on the beach whereas he went on with seemingly no ulterior motive. No matter the case, Tayshia is annoyed because she thinks Clay needs to make it clear and defined that Nicole is his girlfriend. It must've worked, I guess, because the next time we see these two, Nicole's happily sipping on drinks and sitting on Clay while he's doing push-ups.

Actually, nah, I don't buy that at all. That's very clearly an act – almost certainly for Angela. These two might be doomed.

Meanwhile, Angela takes Mike on her date, and the show DOES NOT CARE. We see them for all of about a minute, briefly chatting at a table before making out on a rowboat in a small pool while a nearby waterfall spritzes them. Sounds awful. Get Mike out of this love triangle and make him "The Bachelor" already.

Elsewhere on the beach, Tayshia's spending time focused on another love triangle when she's got her own Bermuda Triangle of Love to figure out with John Paul Jones and Not John Krasinski. Actually, it's more of a love quadrangle – but the fourth side, Haley the now twin-less twin, seems on the outs. Even though she's into JPJ and the two have similar goofball energies, JPJ is not into her and is still obsessed with Tayshia – though not as obsessed as he is with Not John Krasinski and his supposed EVIL DUPLICITOUS PODCAST! He knows FOR A FACT that Not John Krasinski uses the podcast to sleep with fans ... not that he actually has any facts or evidence, and he even admits that this is all a subjective suspicion, BUT IT'S A FACT! Words: They used to have meaning!

Anyways, Haley's sad because clearly she's a back-up plan for JPJ at best, leaving her single yet again – and she's been single for so long. Have you considered a dating pool beyond the same 40 people who've been on "The Bachelor"? There's a whole world of men out there who haven't been on a dopey dating show; they make apps for it and everything! For the time being, though, she tells off John Paul Jones at the bar for being mad at Derek for not being open and honest with Tayshia while he was essentially doing the same thing to her. But nobody heard ANY part of this conversation because they were all watching Demi in the background silently and stupendously commentate on the action. THIS IS WHY SHE IS STILL ON THE BEACH. She gives us a full portfolio of looks, including: 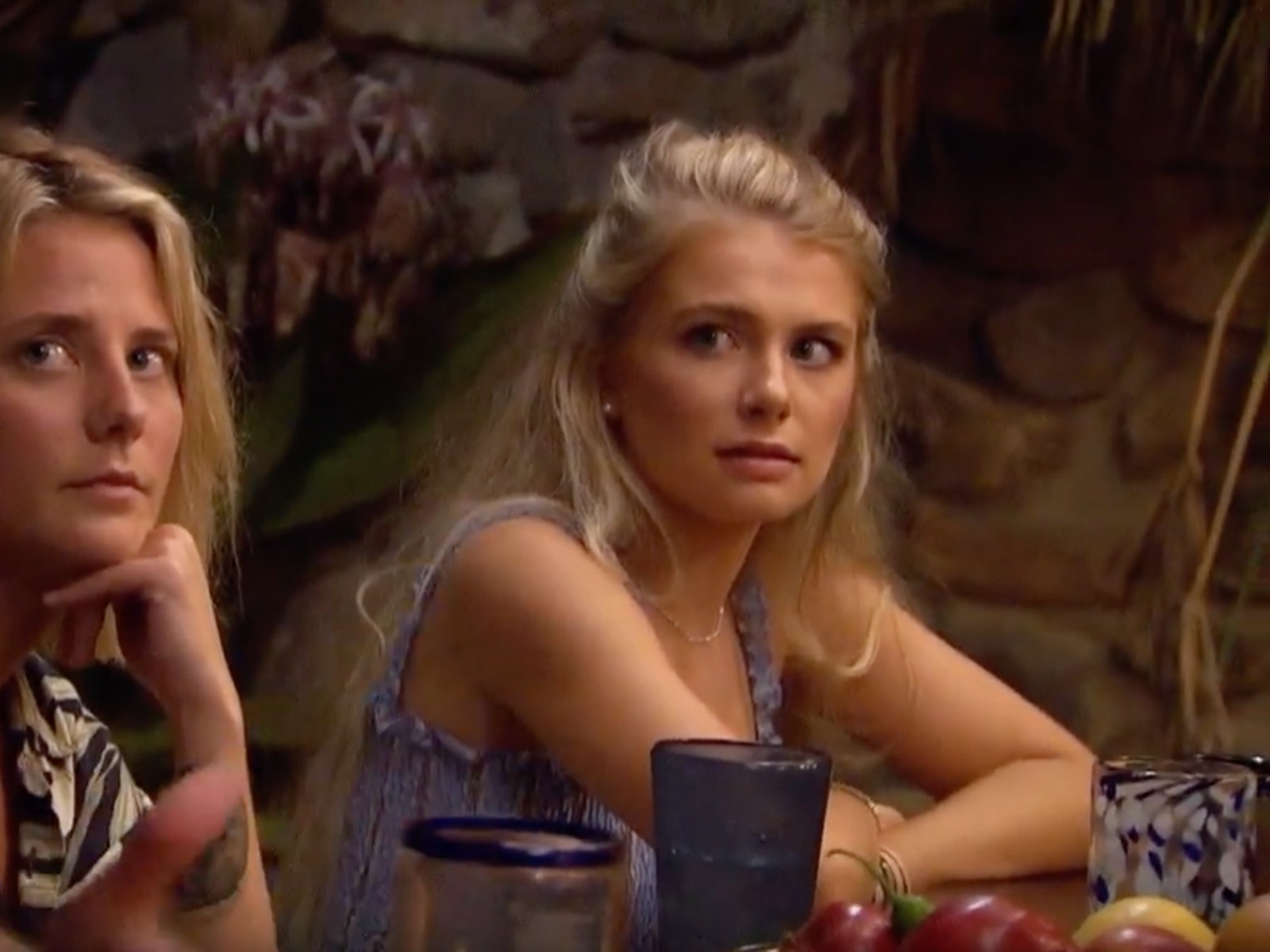 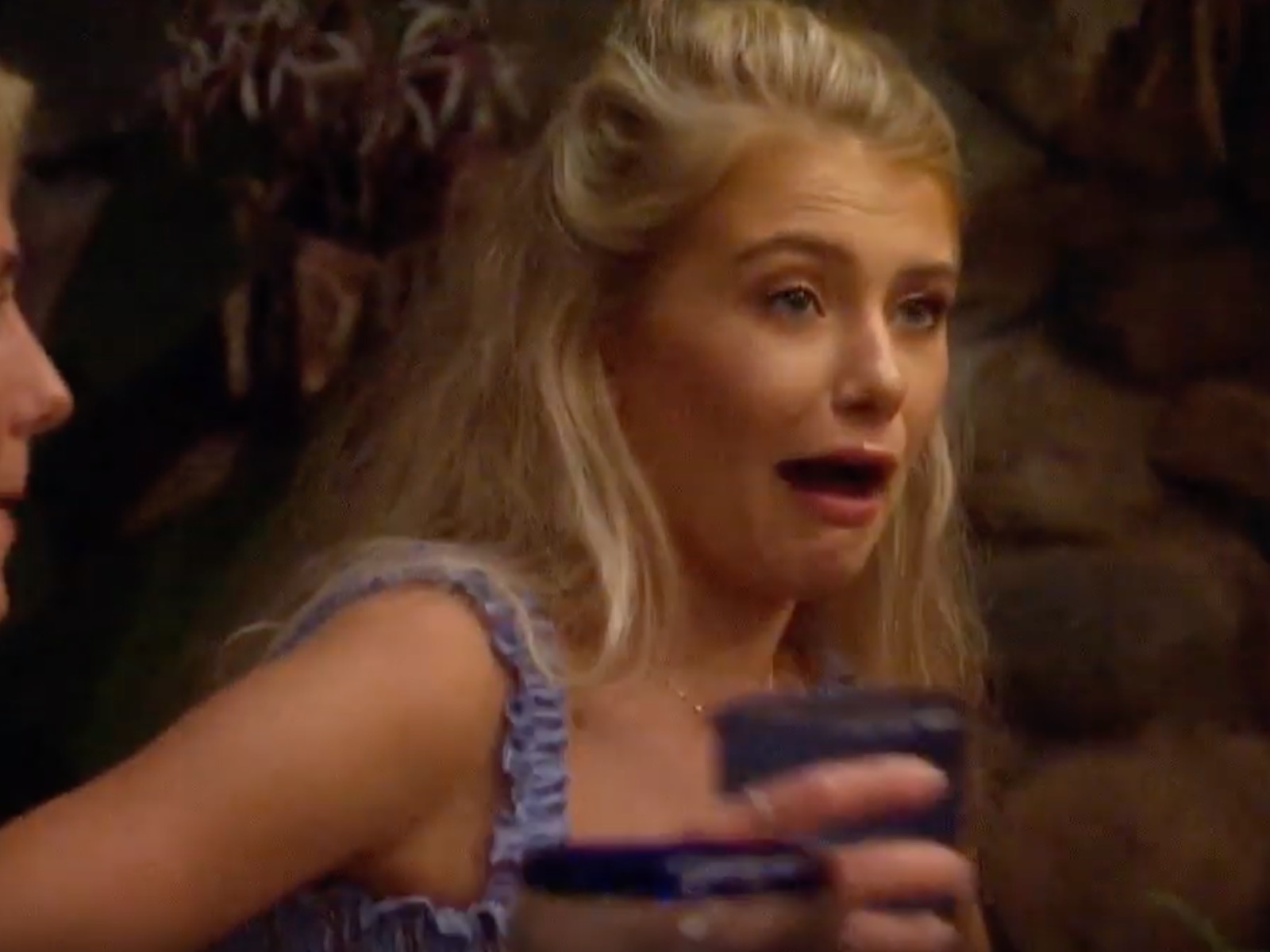 The classic "You Go Girl" combined with "Do You Need Me To Punch Him?" 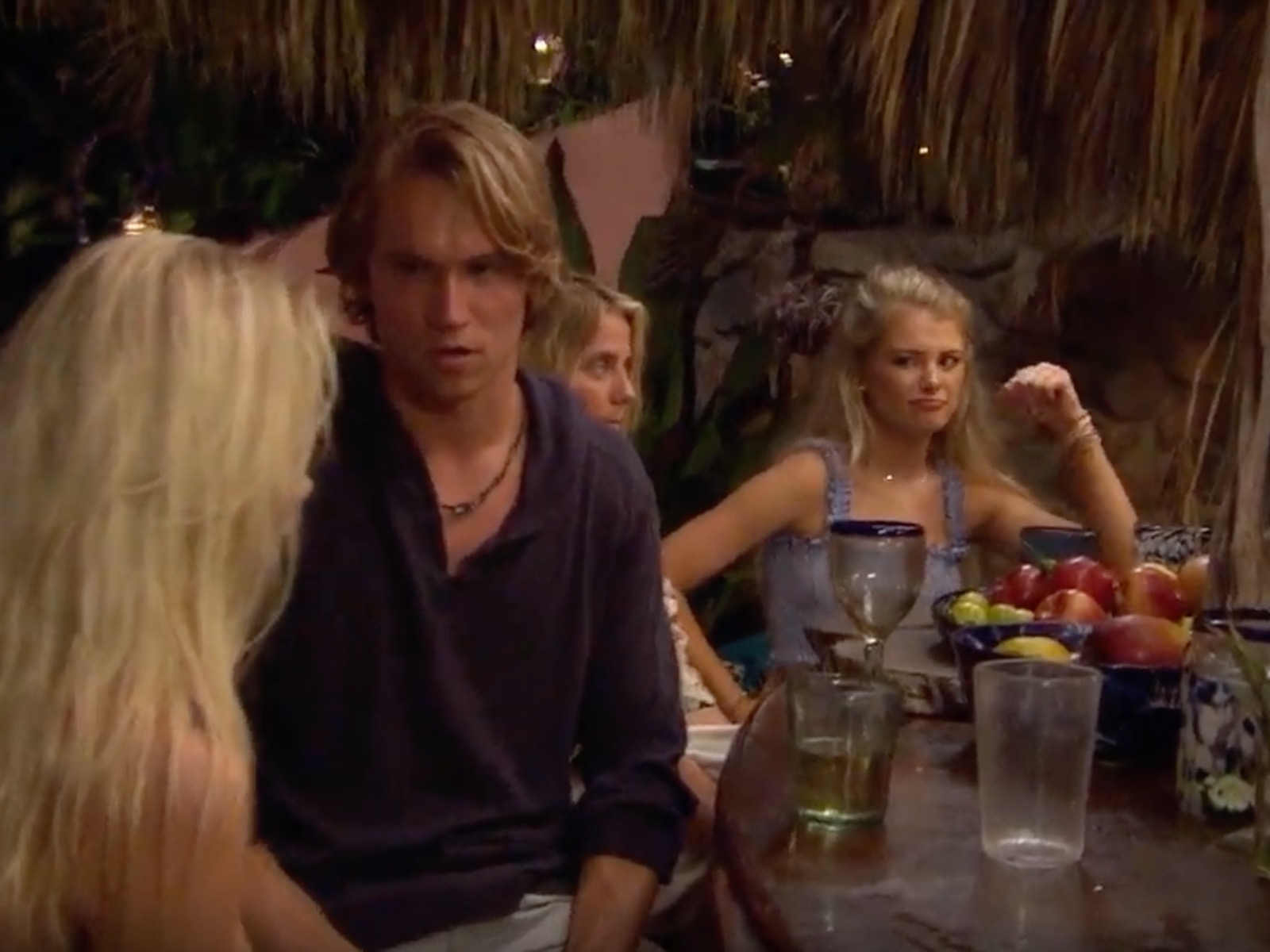 The "What Is This Heterosexual Bro Nonsense" 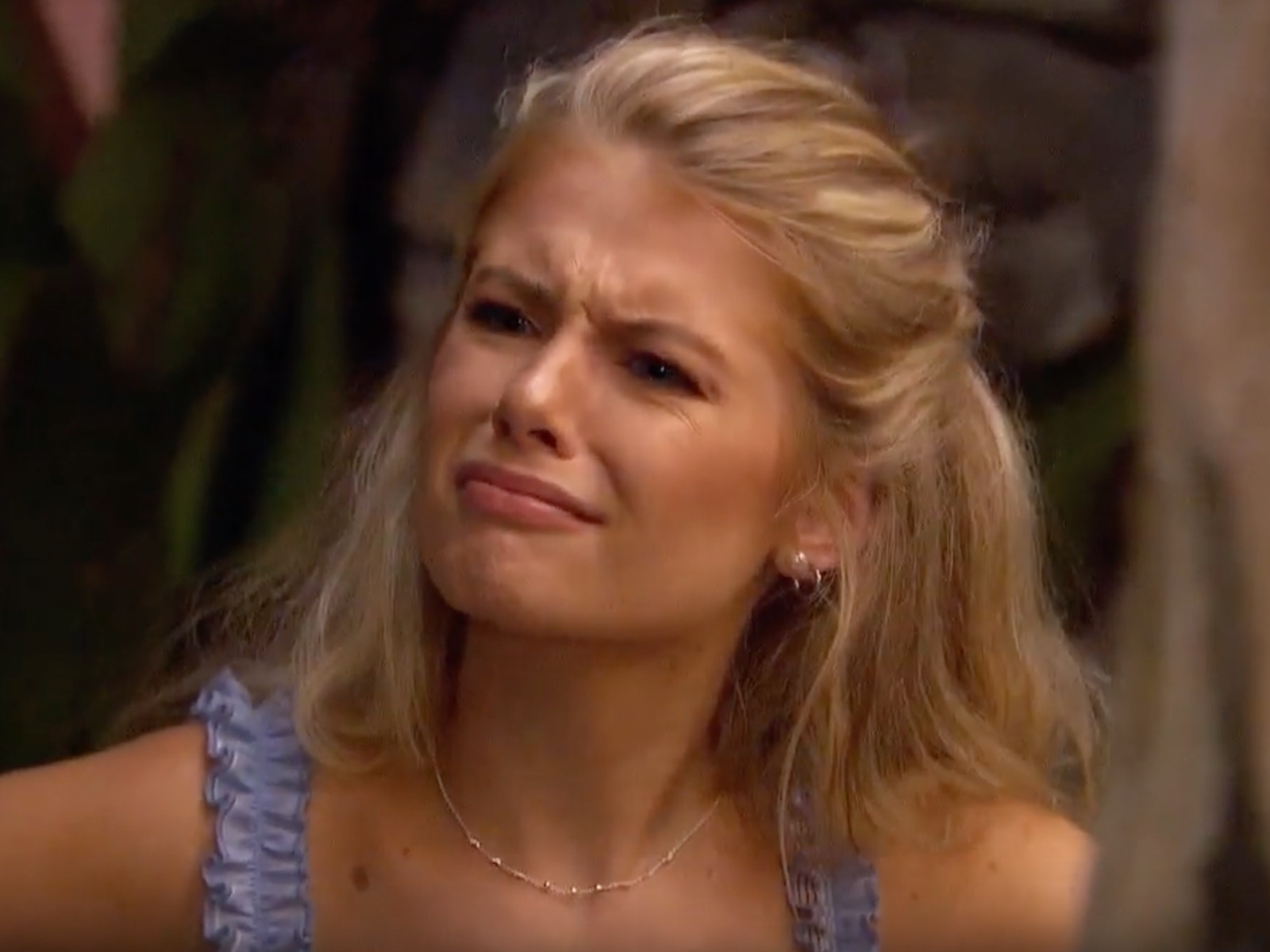 And, last but not least, the "In Case You Haven't Figured It Out, Here's Where You Should Be Looking" 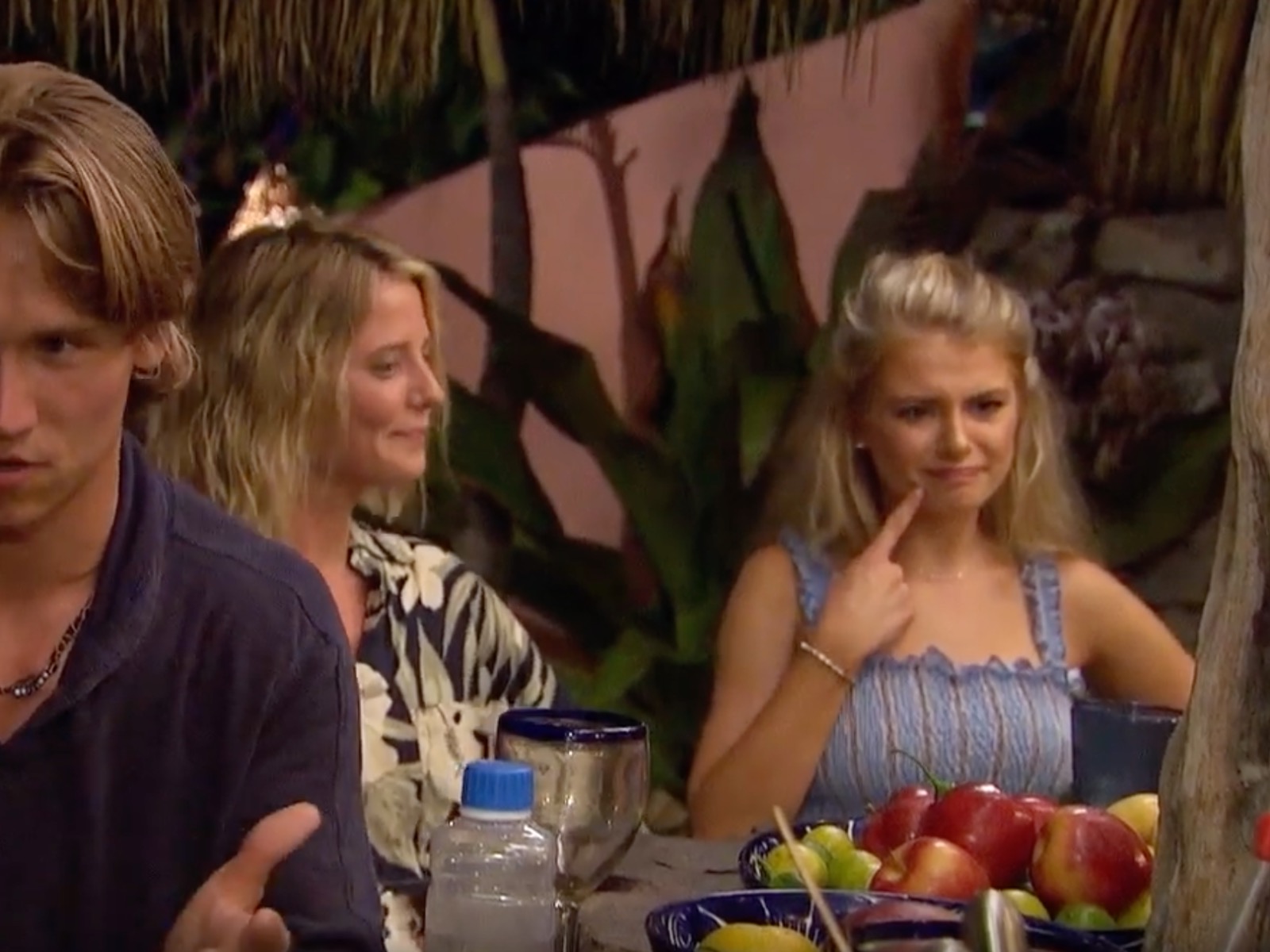 All great, all wildly and thankfully distracting – though somehow not as distracting as EVIL BLAKE creepily standing in the background of the shot as if he's some "Bachelor in Paradise" ghost that nobody's noticed yet. 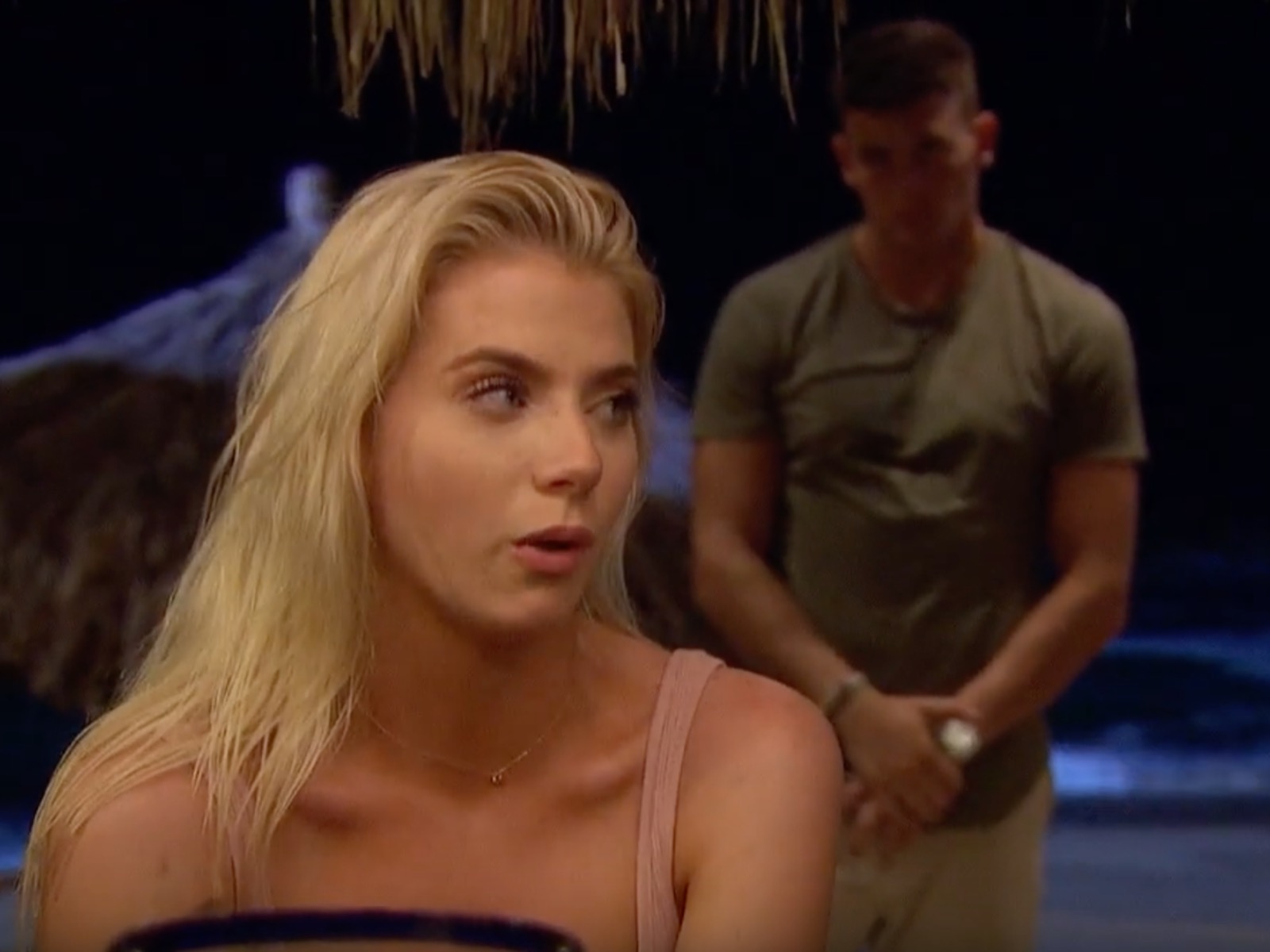 That's literally a shot from a horror movie. AND HE'S JUST STANDING BACK THERE! Get out of there, Haley! That murder ghost is coming for you! Thankfully,  Evil Blake has other plans: being there for JPJ to complain to about men being rude, irresponsible jerks. Not sure if Blake's the guy I'd want to talk to about men not respecting women – but whatever keeps him from haunting Haley anymore. And haunting me.

Of course, JPJ and Not John Krasinski have another verbal altercation, and JPJ comes off as the obvious loser. It's so sad that we finally got to see the full power of JPJ at his most absolutely delightful and weird last week, only to see him immediately turn into a lunatic who rails about a podcast at a stranger's wedding, doesn't understand the definition of the word "fact" and now pulls out a deranged cackle while confronting a decent dude about dating Tayshia when – as Not John Krasinski smartly points out – that's her decision to make. I think Jane's tacos and that diseased date food have finally begun infecting JPJ's brain. It's never good when even Blake is watching this and going, "This is the most unattractive thing ever."

Thankfully, there's a new arrival to distract from our growing disillusionment with John Paul Jones – or should I say ARRIVALS! I should, because there's two of them: Baby Nick Viall from Hannah's season and Matt Donald, who didn't get a rose on the first night of Hannah's season but did get a nice cult following because of his general niceness. He's very concerned what his mom will think of him being on the show – which is cute and sweet, but also don't let you mom watch this show, Matt Donald. She will be very annoyed that you made her suffer through it. (My mom still hasn't forgiven me for the now-departed "Mom-mentary" segment of these recaps.) Anyways, Tayshia's very ready to move on from the drama of Not John Krasinski and John Paul Jones ... but TOO BAD because neither of the guys select her for their double date, instead selecting Kristina and Sydney. I look forward to Kristina still giving her rose to Blake.

Her part of the double date with Baby Nick Viall is fine but unmemorable as the four shop through a Mexican marketplace and sip on a spicy margarita that knocks everyone on their butt. Really, though, I'm pretty sure the spice of Miracle Whip could knock Matt Donald on his ass. After drinking that spicy margarita, he happily notes that he's got things coming out of every orifice. Now I REALLY hope your mom's not watching this, my adorable squeaky-voiced dweeb. But even with his orifice issues, Matt Donald is cute and sweet enough that Sydney really wants to kiss him. So while they're teaching each other some sign language, she says "kiss" approximately 179 times ... and Matt Donald does not pick up on what she is laying down. Just blows right through it. The guy is making every other man on the planet look as suave as Casanova – even Blake, who's back on the beach being all sad and bummed out. CALL THIS DATE A FIVE MILLION PERCENT SUCCESS!

Unfortunately, we have to return to the beach and to the Tayshia Love Triangle – which she basically decides to blow up. And the show apparently decides that this is crucial television, because we linger on every single conversation – and none of them are particularly compelling. John Paul Jones and Tayshia have a conversation that ends with JPJ snotting all over the bedroom floor and sulking on a rock. Then Tayshia and Not John Krasinski basically have a breakup conversation where she decides to remove herself from this narrative. He's annoyed because he's always getting told that he's a great guy but never the right guy, but still, in the end, he gives Tayshia a sadboi goodbye hug.

As it turns out, it's a true goodbye hug because he decides, after getting dumped by one person because she was dating somebody else – someone who the show finagled into the cast for bonus sadness – and dumped by another person because of a floppy-haired surfer dingus with weird anger toward podcasts, that maybe this show isn't for him. Goodbye, Not John Krasinski; you'll find your Emily Blunt or Pam from "The Office" someday.

Huh, you know, after recapping all of this, it sounds like a FAR more entertaining episode than it really was. Unfortunately, all the fun content was background material – like Demi or the Ghost of Blake – or sidebar stuff, like the double date, while the show instead brought its focus on long (and I mean LONG) conversations about over-baked drama with a character who's at his best when he's a goofus, not a villain. If you didn't zone out during both of Tayshia's talks with JPJ and Not John Krasinski at the end, you're a better person than me.

All I'm saying is next time we spend an hour on tedium like this, we better have Demi in the background making more faces.

"Bachelor in Paradise" recap: Who got engaged and who got enraged on the finale?

"Bachelor In Paradise" recap: A double dose of Ivan drama

"Bachelor In Paradise" recap: Not even a tropical storm can wake up this episode