"The Bachelorette" Rose Rundown: The men tell all - and tell Lee off

Monday night's "Bachelorette" Men Tell All was a lot of bickering, but it was bickering with a purpose - and that purpose was dragging a racist guy on television and forcing him to own up to his ugly statements and behavior. WOO!

Last year, going into my maiden Tell All special, I was told by a friend that these episodes are the most entertaining of the season. Two hours of inaudible bickering and padding clip shows later, I had one less person in my life that I considered a "friend."

So imagine my surprise when I found Monday night's Men Tell All special to be one of the best episodes of the show I've seen so far, an episode of profound ... well, no, it was mostly still bickering and clip shows and some guy named Jamey who was apparently on the show (hey, that's Matt's shtick!). But tucked inside all of that, for about 30 minutes, was an honest and sometimes even eloquent confrontation with systemic racism (really!). It was bickering, but it was bickering with a purpose – and that purpose was dragging a racist guy on television and forcing him to own up to his ugly statements and behavior.

And then Dean ate a piece of chewed gum from behind his ear. ALL THE EMMYS NOW PLEASE.

It seemed like we were in for a long night at the start. After some awkward Chris Harrison jokes, we cut to a long montage of some of the most memorable moments from past Men Tell All episodes. If you need to mine old years for drama, there probably wasn't enough this year – or so I thought, being EXCEPTIONALLY WRONG.

After another clip show – honestly, nothing new happened for about 20 minutes – the Men Tell All brought out some of the season's lesser feuds. Whaboom Dude versus Aspiring Drummer Blake yelled over one another until Adam (the guy with the Annabelle doll) made a terrible "Wha-Bye" pun that forced the segment to kill itself out of humiliation. Iggy was put on the defensive because of his snitching, though he said that would do it all again the same way to a rousing round of canned applause. Iggy's lucky that the bar for douchebaggery was set so low this season.

Speaking of which: DeMario somehow found a way to dig himself even deeper into a hole. When Chris challenged him about his girlfriend showing up, he once again denied that she was his girlfriend – because she's just his side chick! See, that's MUCH better. And she had his text messages because "I text everybody." REASSURING! DeMario then got into a mini-tiff with Harrison, began talking in the third person and invented the concept of "ocular facts." It got so bad for DeMario that even Jamey, whose time on the show can only be described as Mooch-ian, got in a good zinger. To matters worse, the show clearly edited around some references to DeMario's "Bachelor in Paradise" allegations.

In short, DeMario should probably never be on television again – and certainly not with a speaking role. At least we'll always have this:

Then, the featured event: the return of Kenny versus Lee – which, frankly, going in, I was fine if they wanted to ignore this bit of ugliness. "The Bachelorette" created a monster by apparently failing to properly vet Lee, a bad look that created a bad time – so yeah, not exactly desperate for round two.

That being said, Kenny is great. He was beloved on the show – apparently by the guys too, as Dean says that he was one of the most liked members in the house – and that hasn't changed. He plays to the crowd, he speaks eloquently about his struggles on the show – for instance, that he didn't feel it was racism, just Lee desperately out of his league – and, best of all, he does a great impression of Lee being all Southern and condescending. And do you know who else is great? Kenny's daughter, who surprises her dad with a visit. She's fun, charming and all smiles – and that was before Harrison sent her and her dad to Disneyland.

Then it's Lee's turn – and that's where things get interesting, because the show owns his racism. Lee comes out contrite and apologetic about his behavior, explaining that he makes jokes when he's uncomfortable (suuuuuuuure ...). All typical, really, but then Dean brings up Lee's controversial tweets – and "The Bachelorette" actually gets into it, reading the tweets on air and forcing Lee to come to terms with words he never really apologized for. At least, until they were discovered.

It's satisfying on one level because Lee has no choice but to become a speedbag, allowing everyone to get a punch in. Dean gets a lick in. Josiah gets a lick in – and asks the ultimate question of "Why'd you sign up for the first black Bachelorette when you have this prejudiced attitudes toward black people?" EVEN FRIGGIN IGGY AND DEMARIO GET A LICK IN. Do you know how miserable of a person you have to be for Iggy and DeMario to bludgeon your character?

But it's satisfying on another level because the guys – mainly the black men on the show, which good; these are the people we need to hear from, and it's time for people like Lee to listen – basically start explaining systemic racism. ON THE BACHELORETTE of all places. Anthony (the one who went on the horse-riding shopping spree date) actually breaks it down perfectly, explaining that you don't have to be overtly racist to allow racist attitudes and feelings to affect the way you treat or behave toward others. Lee definitely doesn't think he's racist, but no racist does; no racist in the 21st century proudly declares himself a racist, but they couch their racist thoughts behind "rationalizations" and other ingrained explanations. And the guys keep pushing Lee to say it and accept that he said racist things ... and it takes a while, but Lee finally, eh, kind of says it. Small victories.

Now, is "The Bachelorette" the best place for this conversation to happen? Not particularly – and it proves that point by trying to play the sequence for easy villainy while also giving Lee a merciful edit in the end. But these are the kinds of conversations that America needs more of – especially when driven by black people articulating their issues – and if it takes this silly show laying out systemic racism for people to hear these things, then great.

And hopefully Lee is sincere about being apologetic, and this wasn't just his agent desperately trying to do some image repair for Lee's music career.

Now back to the dumb stuff.

Dean's next, and Harrison politely shows a montage of his time on the show and his painful final days. THANKS, CHRIS; WOUND'S NOT FRESH OR ANYTHING. Dean has very good picture-in-picture box game, looking hilariously not interested in watching this stuff again. But he survives and basically excuses the show for pushing his father and him back together.

What he really wants to talk about, though, is Rachel – and conveniently enough, here she is to answer his questions. Or at least one question: Why'd she say she was falling in love with him, only to send him packing that night? And Rachel ... well, she doesn't particularly have an answer, but she gives something close enough that Dean's able to shake it off. Poor Dean – or not.

dont feel bad for dean getting cut. my man, got a LIMO home. I had to call an uber, & didnt even have a phone. #MENTELLALL #thebachelorette — Diggy Moreland🌹 (@diggymoreland) August 1, 2017

Rachel then confronts DeMario about his exit, saying that it was his lack of honesty and refusal to own up to his mistake that killed him, something he clearly still hasn't learned. She also says she's bummed at Kenny for letting Lee get under his skin and bummed at Lee for being a racist-ass punk.

Some of the lesser candidates then get their questions in for Rachel. Adam asks Rachel a question; nobody cares. Then Rachel throws some love to a weirdly clean-shaven Matt (dude, it's hard enough to remember you), saying that it wasn't an accident that he got so far and that she wished the world got to see more of him. Take that, "Bachelorette" editors! I know Matt started responding, but my brain immediately wandered. All I know is that he kept holding his hands all creepy and Mr. Smithers-like the whole night. But he wasn't the creepiest part of the night ... 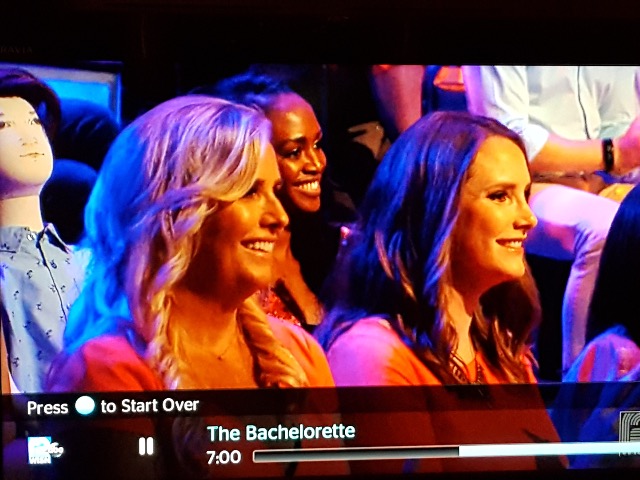 Lastly, Fred – remember Fred? – gives a cute if confused speech about wishing she gave him a chance but still wishing her the best, while Kenny offers his dating services in case Brian, Peter or Eric flame out. Kenny is the best.

So how to wrap up an episode of heavily discussing race in America? BLOOPERS! Thankfully, they're actually funny, featuring Rachel yawning in the middle of one of Adam's big speeches (can't FATHOM why he was sent home), Josiah eating anything in sight, Dean doing rude things to his gum and Rachel roasting Josiah TO ASH with the help of some potato chips.

So, from the intense racial conversations to the golf cart crashes, this season's Men Tell All finally delivered on my friend's promise – though BOY we end on a sour note with Harrison teasing "the already controversial" new season of "Bachelor in Paradise" before a smash cut to DeMario looking nervous as hell. SEXUAL ASSAULT ALLEGATIONS AREN'T A SELLING POINT.

It's a moment somehow worse than Josiah comparing Rachel to O.J. Simpson.

Line of the night

Will, low-key one of the coolest cast members this season, tells the Whaboom Guy, "You literally cannot call anyone else on this stage a joke." Whaboom Guy then exploded into a puff of burned ash and was never seen again. And the world got 57% more tolerable.

My sister is all aboard the Dean train. She likes how articulately he dresses and talks about his feelings. She likes how he calls out racists and sexists. She does not like, however, that he's headed to "Bachelor in Paradise," which is apparently beneath him. It's a free vacation with an open bar; NO ONE IS ABOVE THAT!

Madre Mueller isn't a fan of "Bachelor in Paradise" either, but she is a fan of CONSPIRACY THEORIES. Last night's theory? That Kenny is the next Bachelor – and in fact, he was sent off the show by the producers because they wanted him for the next season rather than having him pair up with Rachel. I don't know about that, but I do think ABC is doing some grooming to set him up as its next star. I mean, who else will be next? Sloppy lips Bryan? Kinda bland Eric? THE TICKLE MONSTER!?

"The Bachelorette" recap: Maybe this actually WAS the most dramatic finale ever

"The Bachelorette" recap: In (kinda, sorta) defense of Rachel

"The Bachelorette" recap: Wait, where'd the end of this episode go?