The Bacon Co. pop-ups are all about the pig

What do you picture when we say the word "bacon"? In all likelihood, your brain goes directly to the crispy, caramelized strips most often found on breakfast plates and in BLTs. But a new bacon-based restaurant concept is working to augment that vision.

What do you picture when we say the word "bacon"?

In all likelihood, your brain goes directly to the crispy, caramelized strips most often found on breakfast plates and in BLTs.

But a new bacon-based restaurant concept is working to augment that vision by introducing a whole new way to love America’s favorite meat candy.

Founded by business partners and serial entrepreneurs Sari Schiff and George Gaspar, The Bacon Co. has based its business model on one thing: succulent hand-cured bacon sandwiches.

The sandwiches are made with bacon that’s been hand-cured, slow roasted and hand-sliced into hearty strips before being piled atop a custom-made Hawaiian style roll from Miller Baking Company.

That’s it. Simple. You can dress up your bacon sandwich with a bit of The Bacon Co.’s housemade mustard (plain, spicy or KK Whiskey-infused). Or you can order it topped with fresh lobster or pineapple that’s been braised in brown sugar and butter. 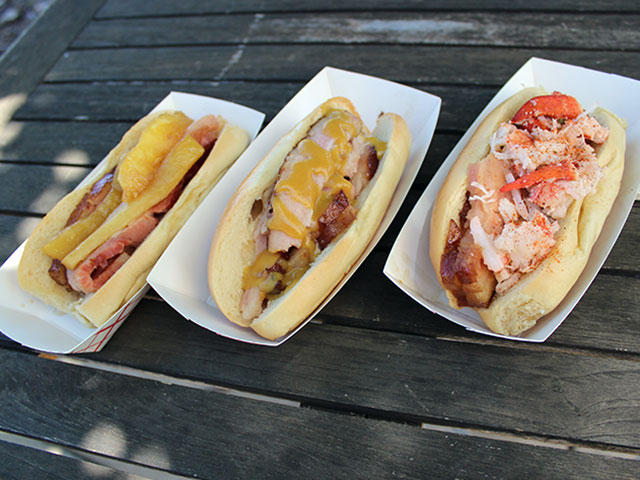 "For us, The Bacon Co. was built on the idea of taking great bacon and adding an extra dimension of flavor," says Gaspar. "It’s simple, but it’s also really delicious."

Adds Schiff: "It’s about having a few great ingredients, putting them together and just doing them really well. We say it’s the honey-baked ham of bacon."

Interestingly, the inspiration for the concept came from a visit to the St. Lawrence Market in Toronto, Canada.

"When you walk into the market off of Jarvis Street, there are butchers on either side. And on weekends, they serve up these really amazing bacon sandwiches," she says. "And it’s literally two pieces of bacon on a roll. My husband and I tried the sandwiches, and it got us talking.

"They were really delicious, but I thought they might be improved by a bit of mustard. From there, we realized that bacon sandwiches in and of itself could be a great concept for a restaurant."

Schiff, who owns a medical consulting business, also earned her culinary degree from the Art Institute of Fort Lauderdale.

"I’ve always had a passion for food," she says. "And I’ve always wanted to come up with a concept for a franchise that that was really simple, but impactful."

And when she explained her vision to Gaspar, a fellow entrepreneur and business consultant who also shared her love for cooking and eating, the idea grew legs.

"I spend my days helping other small businesses grow," notes Gaspar. "But, all along, in the back of my mind, I’ve always wanted to be involved in the food and beverage industry … something really unique, artisan."

So the team set to work. Over the course of a couple of months, they developed a proprietary cure for their bacon. They also tested numerous breads, from hoagie rolls to brioche, before deciding to work with Miller Bakery on a custom-made bun. Sandwiches were tested out on friends and family in a variety of forms until both Gaspar and Schiff felt they’d tweaked everything to be just right. Then they introduced their creation to the public.

The Bacon Co. launched its first pop-up event last November at the Soup Market in Bay View. They began with just one sandwich: the classic bacon (with or without mustard). Since then, they’ve expanded their offerings to three sandwiches – a collection they hope to grow to about five options over time – and began hosting events at Great Lakes Distillery. 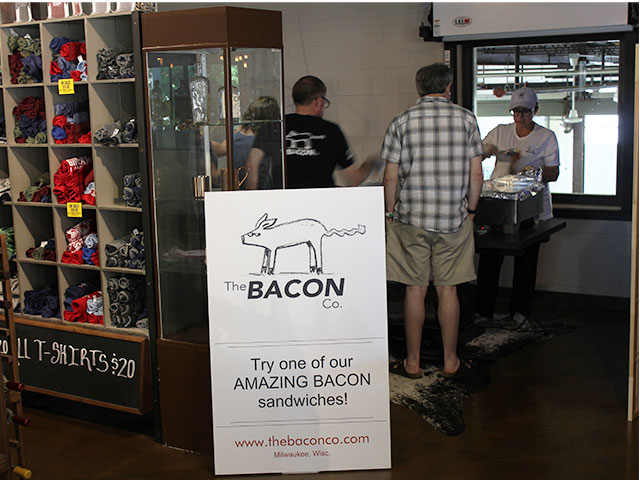 Ultimately, the goal is to launch The Bacon Co. as a fast-casual restaurant concept. Schiff says they’re currently entertaining investors fo the project. Ideally, they’d like to open their first location in late 2017 or early 2018, expanding the concept from there.

"In the end, we could see owning about five locations," she says. "And offering the business up as an easy-to-run franchise for others who are interested."

In the meantime, Gaspar says they’ll be focusing on hosting more pop-up events, as well as taking on catering clients.

"We’re having so much fun with this," says Schiff. "And we can’t wait to see where it takes us. I’m a firm believer that food should change your life. The experience should evoke thoughts and memories. And the same goes for the experience. That’s what we’re doing, and it’s been really, really great."

Ultimately, Gaspar says, it’s all about the bacon.

"In the end, this is about doing one thing really, really well," she says. "And then doing it consistently over and over again. I want to be like Oakland Gyros … a business that’s known for one great thing. I want people to say ‘Look! That’s the bacon sandwich!’"

Make this: Easy, Wisconsin-flavored side dish with booze and bacon