It's been an exciting time of big breaks for English rocker and Rock the Green performer Barns Courtney - quite literally, as the singer-songwriter broke his foot last time he was in town, leaping off the Miller Lite Oasis stage at Summerfest.

After almost a decade performing and fighting his way through the industry, English rocker Barns Courtney is finally having his breakthrough. He released his hit-rich debut EP, "The Dull Drums," earlier this year, and in case you haven’t checked that out yet, you’ve almost certainly heard his stomping, growling bluesy sawmill rock songs in everything from movie trailers and Miller beer ads to maybe even some pre-game Packers pump-up music.

It’s been an exciting time of big breaks for Courtney – quite literally, as the singer-songwriter also broke his foot right here in Milwaukee, dramatically ending his Summerfest set this past June by leaping off the Miller Lite Oasis stage and maybe sticking the landing too well.

But Courtney’s taken the fractured foot in stride, continuing to hit his performances this summer – including a high-profile Lollapalooza gig, complete with hospital garb and a gurney. And this weekend, he’ll set foot again in the town that broke it, when his crippled but uncowed tour arrives at the Rock the Green stage Saturday night at 7:30 p.m., opening for Ben Harper. Before he hits the stage (hopefully not literally this time), we chatted with Courtney about his broken foot and upcoming breakthrough album.

OnMilwaukee: So how’s the foot doing?

Barns Courtney: It’s good! I’m very happy. I was just saying to my peeps that it’s still attached to my body. I’m enjoying it; it’s getting better.

It’s actually been more much interesting and more fun performing with a cast on. It adds such an element of danger and suspense to a gig. I’m hopping around on one foot with this bright blue cast on, and everyone can see in everyone’s eyes, they’re wondering, "Is he going to break his other foot? Is he going to fall off the stage again?" It looks very dangerous, so it’s a tremendous tool to making the gigs a little bit different and more interesting.

And I don’t know if you saw, but I hired a hospital gurney and put on a hospital gown and went out and performed with an IV bag sticking out of my guitar and a nurse pushing me from side to side on the stage. I actually met the nurse on Bumble; she’s a lovely girl. (laughs)

When did you realize jumping off the stage at Summerfest show that things weren’t going right? Was it when you were in midair, or was it on the landing? Or after that? Because you still finished the song!

I actually nailed the dismount. The problem was that I had to go up and over the VIP section, which was quite big, so it was the combined distance and height – and the fact that I thought there was going to be grass down there, but there was only concrete and paint. So that resulted in my foot smashing. I landed it just fine, but my bones just couldn’t take the stress of what I was trying to do. The doctor actually told me that my injury was more typical of a car crash than it was of a jump. I broke my third metatarsal into five pieces and fractured every other one. 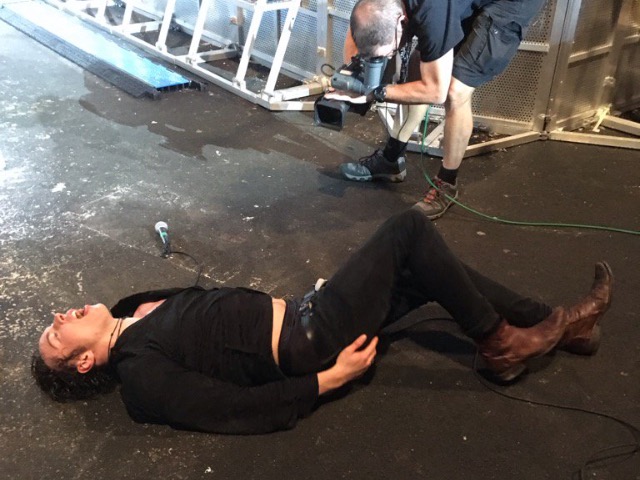 Oh wow. I’m not doctor, but that doesn’t sound optimal.

No, it’s pretty insane. (laughs) But I love that Napoleon Hill quote: "Every adversity brings with it the seed of equal or greater benefit." And it’s true. There’s always something in every situation that’s actually working out better for you. You just have to find it.

And now you’ve turned into an awesome stage prop, so probably the best broken bone of your life. Was this your first broken bone?

It was, yeah! It freaks me out a little bit, because before this happened, I kind of just assumed that I was immortal. And I became incredibly aware of my own mortality when I broke it. It gave me a little existential crisis; I’m like, "Oh sh*t, I can break!"

In non-broken bone news, you also rerecorded "Glitter and Gold" for our beloved Green Bay Packers. How did get involved?

I’m going to be totally honest: I did not know anything at all about football. I spent all my childhood in bands; I was playing every single weekend in little dive bars around England. So, at first, when they offered me that opportunity, I was a little bit skeptical because, as an artist, I like to write about things that I know and things that are truthful to me. And I didn’t want to put anything out there that was disingenuous.

But when I looked at the history of the Packers and actually thought about some of the players and the struggles they go through, I realized that there were a lot of parallels with football and being in a band. I love that Charles Bukowski poem: Unless there’s a sun burning a hole in your gut, don’t do it. I think you need a lot of passion and drive to play professionally – whether it’s in football or in music. I didn’t really end up having to change too much about the song.

And then I got down to the stadium, and I looked through the Hall of Fame, all these black-and-white photos of guys in the ’20s and the Ice Bowl. It wasn’t until then that I saw the huge stadium and all the people who go to see the games and realized that the fans own a part of the team that it really struck me what a huge deal this was that I got to be a part of this. It really hit me like a ton of bricks. At first, I thought it was just a cool opportunity to make music in a different way – and that always excites me as a musician, to go and do things that I haven’t done before. But it’s humbling to be able to be a part of something so big.

Did they give you a cheesehead as well to make you an official Packers fan?

No, they didn’t give me a cheesehead actually! I saw them at the game – and then the team doctor, Pat McKenzie, actually took a look at my foot, which was crazy.

You’ve got your first full-length album coming out at the end of the month. What’s it feel like to finally have this debut come out?

It feels good! It feels very exciting, but to be honest, my head’s on album two now. I’ve lived with these songs for a long time. When I got dropped from my first deal with Island Records, I wrote a lot during that period of three years, so a lot of these songs are five years old. So my head’s all on my next record. I’ve got a lot of songs for album two that I’m putting together, and I want to start looking at those and getting them recorded.

What do you hope to advance or improve or do differently already looking ahead at album two?

Do you have a favorite song off this album – one that, even after five years, is still close to the heart?

The song I named the album after, "The Attractions of Youth." I was supposed to be having a jam with this guy from Killing Joke called Youth – he plays bass. I went into his house, and it was all full of Indian trinkets and enormous Eastern wooden doors affixed and built into the house, shipped over from across the sea. I see his hand coming through the door handing me this enormous joint, so I took a hit off this joint, sat down and this guy was baked out of his skull, talking to his friend, completely out of it.

So I sat on the floor and starting playing around with this beaten-up old harmonium. And the vibe was so electric in the room. I don’t know whether it was because this guy hadn’t seen his friend for years and they were just such good friends that it was infectious, or if it was just because I was really high. But I wrote this tune by myself on the floor and I think I got it, so we passed all the floors into the attic, where he’s got a studio set up. And on the way, we picked up different musicians from each room that we passed, all working on different projects, and we got up there, hung out for a bit, smoked a little, had a little jam and then they all left and we recorded "The Attractions of Youth." There’s just something about that song that I feel like it really captured the mood of the day.