Save for a visit from a street-corner preacher, a trip to the bus stop rarely qualifies as a religious experience. However, those taking the bus to or from the Cathedral Square stop on the corner of Wells and Jackson might sense a little extra spirit.

Save for a sermon from a street-corner preacher, a trip to the bus stop rarely qualifies as a religious experience. However, those taking the bus to or from the Cathedral Square stop on the corner of Wells Street and Jackson Street might sense a little extra spirit.

This morning, the St. Josaphat Basilica Foundation – with the help of Clear Channel Outdoor and Zizzo Group – kicked off a new fundraising effort by unveiling a new bus shelter in Cathedral Square, fully designed and decorated to look like the famed local landmark. The back of the shelter, for instance, looks like some of the stained glass from the basilica, and if you look up inside the stop, the roof looks like a close-up replica of the landmark's ceiling. The bench is even reminiscent of a pew. And the side panels advertise the fundraising campaign on behalf of the historic basilica. 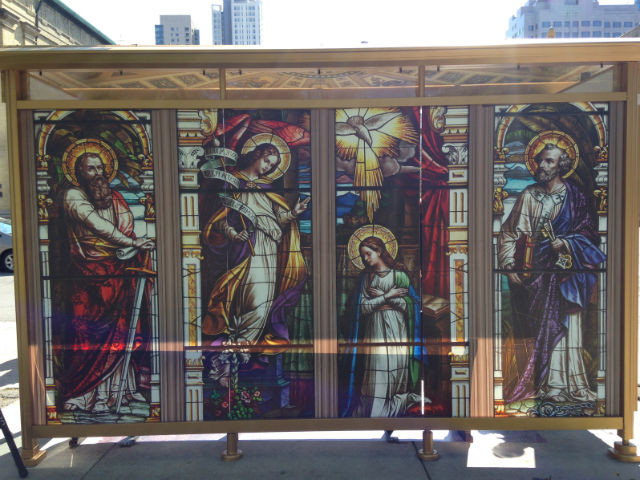 "It's a religious icon. It's an architectural icon. It's a community icon," said Mayor Tom Barrett at a press conference held at the bus stop this morning. "It is our responsibility – this is our time – to make sure that we preserve these incredibly classic buildings because of their importance to our city. That's what's at stake here."

According to Susan Rabe, president and CEO of the St. Josaphat Basilica Foundation, this new effort is its largest ever, aiming for $7.5 million to help restore and preserve the historical and religious landmark. It's also the first campaign in almost 25 years – when the foundation was originally created – to make crucial replacements and repairs on the exterior of the church. Over that time, the foundation did make other additions and fixes to the basilica, including the John Paul II Pavilion and Visitors Center in 2000 and, most recently, adding portico and bell tower lighting.

"The stone is very soft – it's Ohio sandstone – and the building requires us to take care of her," Rabe said at the press conference. "Twenty-five years have passed, and today we say rally the community on behalf of her, because she needs us."

In addition to critical repairs to the structure's stone and masonry, the campaign also hopes to raise enough to restore and repair some roofing for the basilica – including adding textural lighting to the dome.

"The preservation of the basilica building is not just the saving of a structure, but the saving of a piece of the city's heritage," said campaign chairman Edward Cichurski. "Its presence in the Lincoln Village area anchors the heart of an ever-changing immigrant community, and it creates the hope of development for the entire neighborhood.

"Your presence at this dedication is a call-out to the entire metropolitan area about the need and responsibility to preserve and enhance this heritage site, and to sustain the learning that comes from studying the basilica's architecture, as well as its meaning as a piece of the Milwaukee fabric. The legacy is worthy of everyone's support." 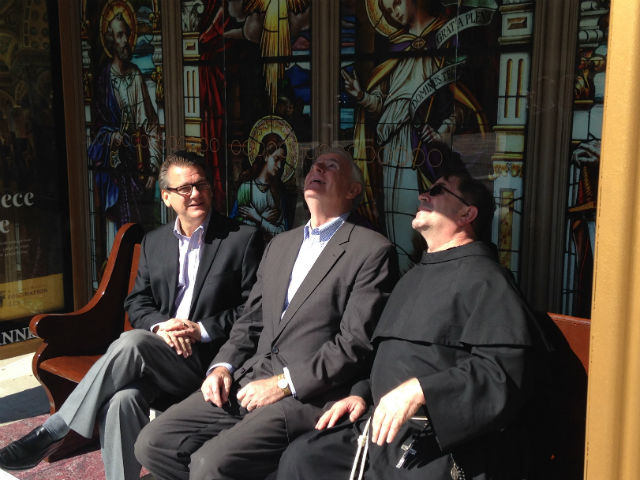 As for the new bus shelter itself – the first of its kind in terms of attempting to recreate a building – it took three days, as opposed to the usual two or three minutes, to install the new display, with every piece remodeled and revamped to fit the Basilica of St. Josaphat theme.

"If you can't make it to 6th and Lincoln to go inside the basilica – but you should – you can sit inside the shelter and experience all of the beauty the basilica offers," Rabe said.

The bus shelter will remain decked out as the basilica for more than 10 weeks. And while it may not be the actual Basilica of St. Josaphat, Barrett jokingly assured those at the press conference that the new bus shelter has spiritual power all its own.

"Just walking into it, waiting for the bus, you will receive sanctifying grace."

Is driver's ed a key to solving our reckless driving? Some leaders think so

UPDATED: Motorized scooters will return, but with restrictions