There's a new bakery and cafe on the docket for Milwaukee's Historic Third Ward. And it promises a barrage of sweet treats and comfort food indulgences. Batches is the name of the new venue, which is slated to open in late winter or early spring of 2018.

There’s a new bakery and cafe on the docket for Milwaukee’s Historic Third Ward. And it promises a barrage of sweet treats and comfort food indulgences.

Batches is the name of the new venue, which is slated to open in late winter or early spring of 2018 in a corner storefront at 401 E. Erie St., just across the street from Dandan.

The new bakery-cafe will be spearheaded by Dandan pastry chef Jaceleen Latin-Monagle, who will operate the business in partnership with Chefs Daniel Jacobs, Dan Van Rite and business partner Jeff Joerres. Assisting Latin-Monagle with day-to-day operations will be Dandan pastry sous chef Linda Thai, along with Chris Walker, who previously worked with both Goodkind’s Lisa Kirkpatrick and Latin-Monagle at Hinterland.

Latin-Monagle, whose experience includes work with SURG Restaurant Group where she was mentored by Chef Kurt Fogle (now of Bass Bay Brewhouse), as well as the late Hinterland Erie Street Gastropub, says the bakery will have a distinctly American spin. 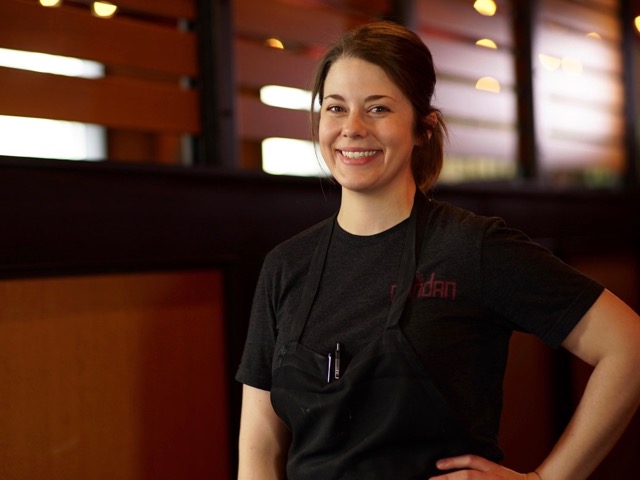 "The city already has amazing French and Italian bakeries," she says. "So we’re looking to offer something different. Our focus will be on classic American forward offerings, including vintage desserts like icebox pies and a unique spin on classic funfetti cake. We’ve been making pies for The Tandem, so I’m having a love affair right now with classic Southern desserts like Kentucky Derby pies … all the ooey gooey yummy buttery stuff."

Other offerings will include a full coffee program featuring Anodyne Coffee, housemade ice cream and sorbet, pies, brownies, cookies and candy bar style layer cakes in flavors inspired by bars like the O’Henry and Snickers.

"We’ll also have some savory breakfast and lunch items," she says. "But it’s definitely a sweet-tooth bakery … I’m thinking how can I put sprinkles and more brown sugar in everything?"

Latin-Monagle says they are still finalizing the menu for the venue, but "it’s very much focused on homey comfort food," she says. "And we’re hoping to tap into a bit of nostalgia along the way."

That means breakfast items like a spin on tater tot casserole along with daily grab and go items like wraps, salads and soups. Latin-Monagle says they will also feature a number of items each day which cater to both vegan and gluten free customers.

"Our goal is really to create vegan and gluten-free items that really stack up to their counterparts," she says. "We want them to taste just as good as their dairy and gluten-filled versions."

The 1,000-square-foot counter-service cafe will seat between 15 and 20, and Latin-Monagle says the decor will incorporate a combination of "industrial minimalism with funky eclectic touches," including splashes of color inspired by the "funfetti sprinkles palate." In fact, she notes that there might well be a mural that’s inspired by sprinkles.