On Thursday morning at 2 a.m., Tanya Tucci posted a lengthy post to the Bay View Neighborhood Watch page about the trouble they've had trying to open their business and her concern over crime. The thread quickly spiraled from a place of concern to a raging dumpster fire of anger, accusation and name calling.

For some reason, numerous Facebook neighborhood pages – in Milwaukee and beyond – are filled with silly memes and friendly advice along with vitriolic rants and mean-spirited lash outs. Recently, a stranger-than-fiction post that ensued hundreds of comments left everyone frustrated and baffled, once again asking the question what is the purpose of these neighborhood pages and why do they often generate so much anger?

On Thursday morning at 2 a.m., Tanya Tucci posted a lengthy post to the Bay View Neighborhood Watch page about the trouble she and her husband have had trying to open their business as well as her concern over crime in the neighborhood. 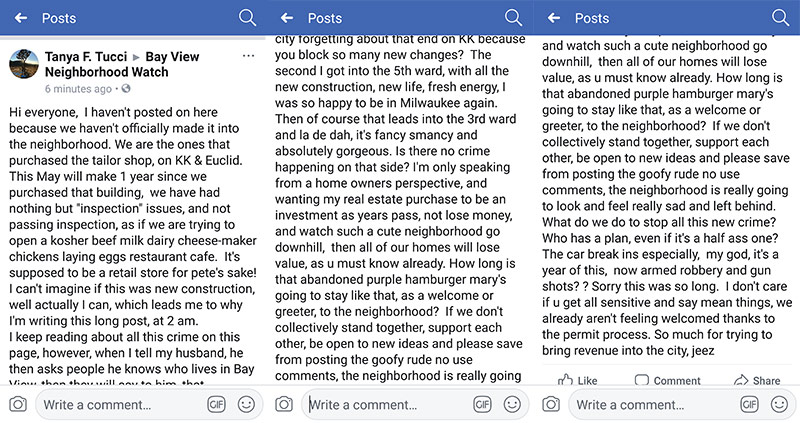 Last year, Tucci and her husband, John Mitola, bought a building at 3116 S. Kinnickinnic Ave., formerly Hans Billerbeck's tailor shop of 45 years. The Chicago couple planned to open a business, Bay View Apothecary, selling various "New Age" and natural products and services, but have experienced many unexpected hurdles with the city as well as neighbor complaints forcing them to delay opening the business by many months. 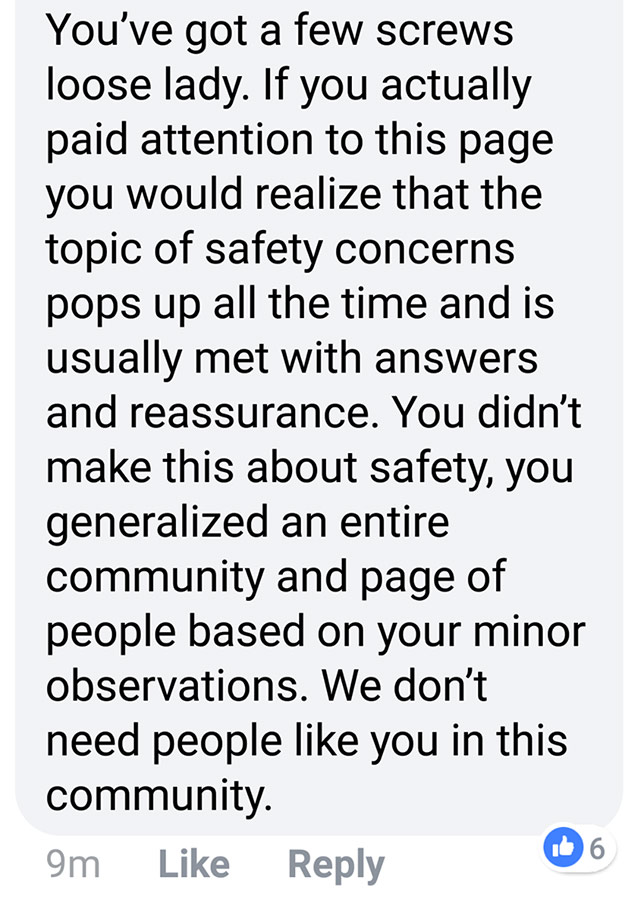 "We have had a complete nightmare from neighbors complaining about garbage … inspectors from hell and just an overall feeling of not being very welcomed," says Tucci.

Tucci, who is also a massage therapist, soap maker and gallery owner, says she and Mitola planned to purchase a home in Bay View and split their time between Chicago and Milwaukee. However, after reading several posts about crime in Bay View she decided to express her own concern about the neighborhood as a future business owner and potential home owner.

"Now that we are investing a ton of money and time into our own building, I want to make sure we progress and remain safe. My first post was not meant to offend or insult anyone," says Tucci. 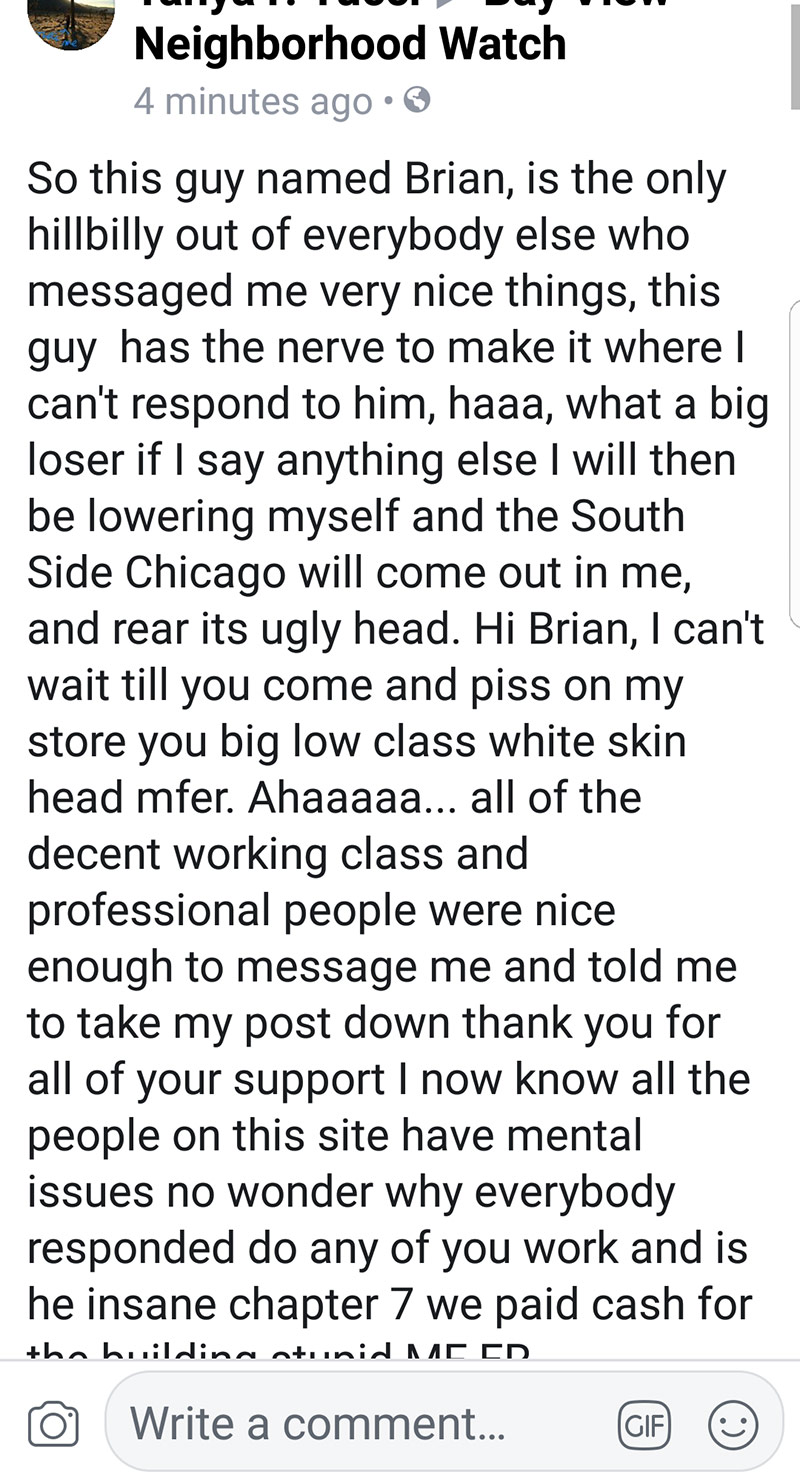 But many of the people who read the post were offended by what she said and how she said it. What started out as coming from a place of genuine concern spiraled into a raging dumpster fire of anger, accusation and name calling.

Tucci starts out her post expressing her frustration with "inspection issues" as well as the increased crime in Bay View.

"I keep reading about all this crime on this page, however, when I tell my husband, he then asks people he knows who live in Bay View and then they say that everybody in this group is uptight and Bay View is safe," wrote Tucci. 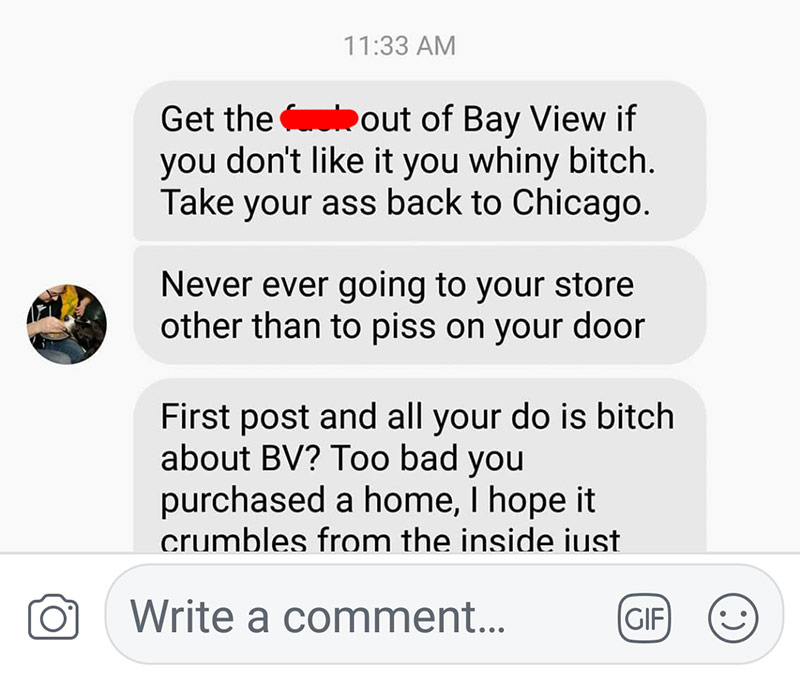 The post goes on to describe her recent experience on Kinnickinnic Avenue that included an old man heckling her from a car, two cars on bricks with no wheels, a girl walking three mangy pit bulls, crazy people at the bus stop and more.

"I couldn’t wait to get the hell out of there as fast as possible. I for one didn’t feel safe. What happened to the neighborhood? I know you guys are always against change and I read about you never want condos or anything like that, but from the outside looking in, the area has gotten a very depressing morbid vibe to it," Tucci wrote.

At the end of the post Tucci asks for the neighborhood to "collectively stand together, support each other, be open to new ideas and please (stop) posting the goofy, rude, no-use comments." She ends the post with "I don’t care if you get all sensitive and say mean things, we already aren’t feeling welcomed thanks to the permit process. So much for trying to bring revenue into the city, jeez."

Amanda Jobs read all of the post, screen captured many of them and monitored all of the comments throughout the next day.

"She had legit concerns, or what could have been seen as legit, but instead of asking for help appropriately, and not trying to scapegoat the neighbors, she went full-on nuclear. She hasn't even opened and has already alienated the neighborhood," says Jobs. 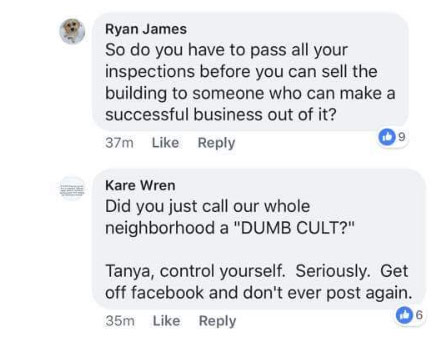 "As others have brought up, I think her whole business / building is drowning. She knows it. And instead of accepting it, she is lashing out at the community, making a sort of self-fulfilling prophecy. If the neighbors hate her, that absolves her of being responsible for her failure and actions."

The next day, the drama continued when someone – a neighbor? Tucci? – taped a photoshopped picture of Mr. Rogers flipping off the camera to the outside of her building. 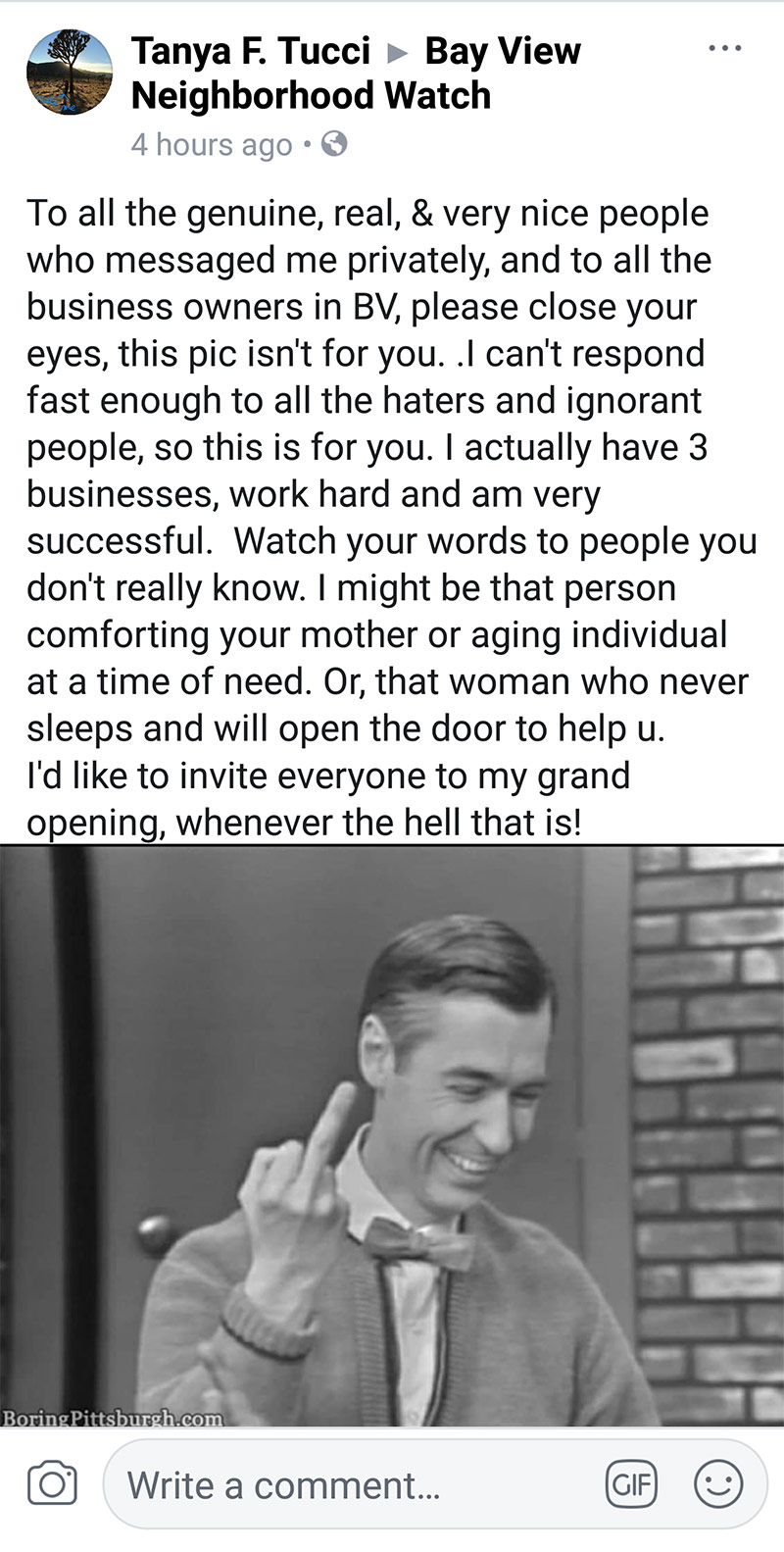 Many of the responses to Tucci’s posts (there were four in the end and all have  been deleted) were angry and some included profanity. People posted to her personal page as well. 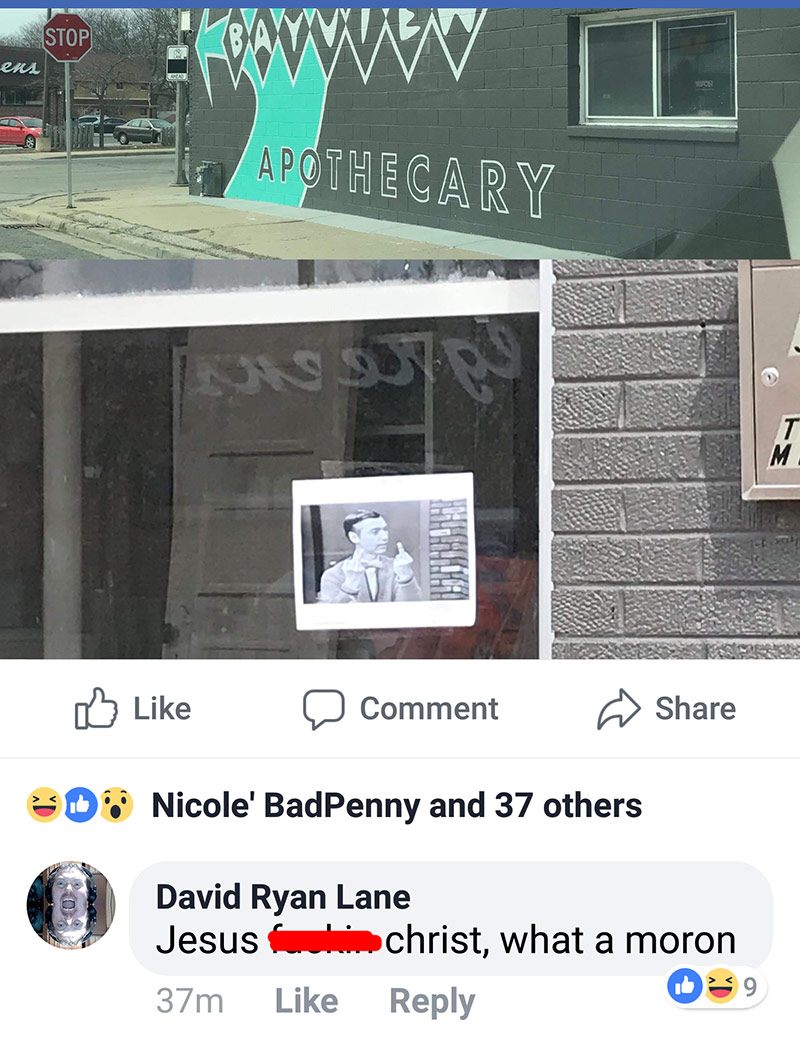 "It's one thing to post on a private group page, but to carry it to my public Facebook is utterly ridiculous and was not needed. I am a very strong woman business owner. I do not care what they think or feel about me. I'm happy and content in my own skin and proud of all of my accomplishments," says Tucci. "I know who good people are." 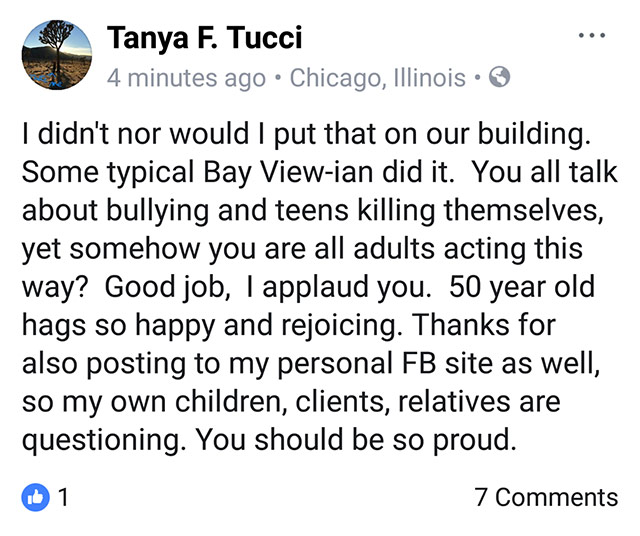 In the end, nothing seems to have been accomplished other than time lost on negative exchange – and potentially a loss of future customers for Tucci. Are neighborhood pages just a hateful hobby for some people or can they really be helpful?

- Andy Tarnoff contributed to this report.

What happens to a Facebook page when someone dies?