Gleaning frothy wisdom from Alworth and his "Beer Bible"

As simple as it might seem on the surface, there's a lot to know about the complex product that is beer. And no one seems to know the subject better than Jeff Alworth, author of the new, encyclopedic book, "The Beer Bible." As Alworth prepares to visit Sugar Maple for an event to launch his book here, we caught up with him to ask him about his favorites and about pairing beer with food.

As simple as it might seem on the surface, there's a lot to know about the complex product that is beer. And no one seems to know the subject better than Jeff Alworth, author of the new, encyclopedic book, "The Beer Bible."

As Alworth prepares to visit Sugar Maple for an event – in conjunction with Boswell Book Co. – to launch his book here, we caught up with him to ask him about his favorites and about pairing beer with food.

OnMilwaukee: What your general suggestions and rules, or your thoughts about what beers to drink with different kinds of food ... How do you approach that?

Jeff Alworth: I know there are a lot of different theories on this. That's a good thing to acknowledge up front. One of the issues that I like to point out about beer and food pairings is that both food and beer are complex. But let's say a nice marzen would go with a good Mexican mole. The problem is there are a lot of different Mexican moles out there. And some of them are more nutty and some are more chocolaty and some of them are spicier. The same thing that's true with beer, depending on what brand you're dealing with – American styles are hop-forward and Belgian styles are yeast-forward, one IPA tastes very different from another IPA.

So, I'm a little leery of any general guidelines that talk about style and food dishes, because of that complexity. I think it's actually better when you're approaching this conundrum to kind of break down both the dish and the beer and look at what the main flavor elements are and then go from there.
As with any kind of food pairing, flavor pairing, you can have contrasting flavors, complementary flavors. They have to relate to each other, but they don't have to be identical. It depends on what you're trying to do with that pairing, so that's also worth noting. It depends on what you're doing. 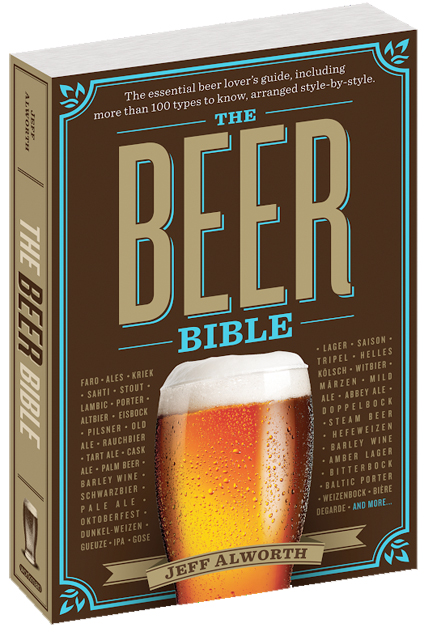 OnMilwaukee: Sometimes do you just think about what the "rules" might be and then just sort of throw them out?

Alworth: Yeah. I think you really need to just think these things through. And one way to think them through is to break both food and beer down. So handy rule is to think of beer in different kinda of general categories. Is it a malty beer? Like think of the main flavor elements in the beer style that you're mainly dealing with. Is it mainly malt? A malt-forward beer style. Hop-forward beer style. Yeast-forward beer style. Or a fruit kind of flavored beer. That would be another category. But think of the predominant flavor and then kind of break it down from there.

Enjoy your beer and think about which flavor is popping. And then go from there.

OnMilwaukee: My dirty little secret as a wine fan and as a beer fan is that I kind of order the food I like and the beer or the wine that I like. And I generally find those go together almost as well as anything for me.

Alworth: I think that works, and there are a few handy (things to remember) like pilsners and saisons are really versatile and the will go with a lot of different foods. That's a good thing to know and there's a beer style called rauchbier, which is a smoked beer. It goes with almost nothing. It’s really penetrating and its a difficult flavor to work with.

OnMilwaukee: Yeah so order the rauchbier before or after dinner not with.

Alworth: Yeah, right, unless for whatever reason you want something really smokey. If you're having a nice smokey, meaty thing and you want to just pig out on smoke or something I guess that would be the thing there. It's a really tough pairing.

OnMilwaukee: I think people might value your opinion about some of your favorite Wisconsin and Milwaukee beers.

Alworth: People have been asking this and it a little bit of a challenge because I haven't traveled around as much and breweries open so fast that it's hard to keep up. I actually used to live in Wisconsin.

OnMilwaukee: Were you in Madison?

Alworth: Yeah. I went to grad school there. But I haven't been back in a number of years, so I know there's a bunch of breweries opening up, that I'm aware of. And beer geeks and Wisconsiners track this very closely and they know exactly all the best breweries in the state. I know Wisconsin more than I know ... I've never been to Michigan, for example. I have no idea what Michigan is like. Your local folks are going to be much better than I am about the good beer in Milwaukee, I'm afraid.

OnMilwaukee: On the tour do you plan to try a lot of places, or is that risky?

Alworth: It's not so much risky and I will drink as much local beers as I can, I'm just not the tourist ... I'm not staying in any one place very long. It's just not a very long period of time to do that. And I definitely do drink as much local beer as I can and I try to get a sense of how the local culture is. When I was in New York I would go into a place and say "What's local?" And they would kind of stop and scratch their chin and say "You know there's some place upstate we got, I think." And they would look at their taps and try to find one beer. Its kind of unusual. When you go to Wisconsin to a good beer place, you're going to find a ton of Wisconsin beers on tap.

Alworth: And that's what I love to do. And I love to stop into a nice ale house that has a lot of great locals so I can try some of the best beers and have somebody knowledgeable on staff give me a heads up. And I also like to drop into places where I wouldn't expect to find good beer and see what they're pouring. It’s kind of a good way to judge how a town's beer culture is.
I have the urge to just always drink New Glarus. That's always a challenge.

OnMilwaukee: You could do worse.

Alworth: Not only could you do worse but you got to go to Wisconsin to drink New Glarus.

OnMilwaukee: Well have you heard the new stories about this? That bars in Minnesota have been getting busted for selling Spotted Cow?

Alworth: Oh no. I haven't. That's pretty funny. A funny situation. I was in New York and there was a bartender that told me he had rustled up a keg of Bell’s and tried to sneak it in and he got busted for that.

OnMilwaukee: Really? How would the authorities know you have a keg of beer in your trunk or something?

Alworth: Yeah, it is bizarre. Someone tipped them off. He didn't get thrown in jail. He was not allowed to serve that keg to the public.

Alworth: Yeah that is tough.

OnMilwaukee: Desert island beer: If you could bring one beer with you to the desert island what is it?

Alworth: This is actually much tougher because I wrote this book. There were beer styles that I was not a big fan of when I started writing it. Then I went to Europe, I talked to brewers, I stopped in pubs, I tasted the beer and then I started liking even more beers. I was not a big German lager fan, and I've become a fanatic for helles beer and Ayinger was just a brewery that blew my mind, and I'd never really spent any money on German beer before I went. So this question has got much harder.

I always use this as an opportunity to advocate for beers that people haven't tried or head of so I'll do it that way. And I always choose a different beer because there's a lot of unknown beers out there that people should be drinking. But I think some of the beers from Belgium that really want to add because people should try different, more ... There's this brewery called Rodenbach in West Flanders that makes a tart barrel-aged beer that is almost impossible to reproduce, and many American breweries have tried to make this beer and almost none of them succeeded in even making it drinkable much less even coming close to Rodenbach’s quality.

So, Rodenbach Grand Cru is a great beer for people to try and especially if you don't think you like beer, especially if you're a wine drinker. It’s an acidic beer. It's very well balanced. The process of barrel aging produces all the esters which the mind tracks as fruit. So it almost has a cherry quality about it. So wine drinkers very often like this beer. Beer drinkers, if they like tart beers, definitely like this beer. And it's fairly easily available in the United States and so even at the grocery store ... Well not the grocery store. Maybe a good beer store you will find it.

Layman Brewing brings back its fish boil and bottle release