For the fifth year in a row, Biju Zimmerman organized a large-scale block party with myriad bands, drinks and food to raise money for a Milwaukeean in need.

For the fifth year in a row, Biju Zimmerman will organize a large-scale block party with myriad bands, drinks and food to raise money for a Milwaukeean in need.

The event takes place Sunday, Aug. 11 at the Pabst Taproom, 1037 W. Juneau Ave., from noon to 11 p.m. The event will be held in the taproom as well as the beer garden.

This year, the event will raise funds for Brian Kurtz, who fell three stories when a balcony railing broke. He suffered two pelvic fractures, three broken ribs, a partial collapsed lung and a broken wrist requiring surgery. Consequently Kurtz will be out of work for two months.

Kurtz is a lead supervisor at a manufacturing company, a student and the owner of   a motorcycle shop called 2nd Chance Cycles & Detailing. 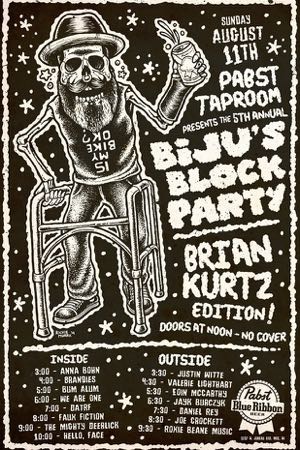 "Brian is a true Milwaukeean, motorcyclist and overall good guy who has always been there for anyone who needs help. He actually injured himself helping out a friend. Friends helping a friend; Milwaukeeans helping a fellow Milwaukeean," says Zimmerman, a musician, stage manager and promoter.

Bands start at 3 p.m. There is no cover for this event, but donations will be accepted and a fundraising raffle will take place on site.

"You'd be hard pressed to find a better way to spend a Sunday than listening to a killer variety of talented local musicians at a true Milwaukee staple while also supporting an incredible local man," says Zimmerman.

This is the first year the event will be held at the Pabst Taproom. For the past four years, it was held on Second Street in Walker's Point. The block parties raise money for a Milwaukeean who suffered an illness or injury within the last year.

Here's the lineup of bands for Biju's 5th Block Party:

The Parking Lot Social will bring a party to State Fair Park on Aug. 12-16