Cartoonist Sanders brings his biting commentary back to Milwaukee

What comes around goes around and that's perhaps even more true in Smallwaukee. I was reminded of this when veteran editorial cartoonist Bill Sanders re-appeared on the scene, contributing his biting work to OnMilwaukee. Sanders' art is on view this week during Gallery Night.

What comes around goes around, and that’s perhaps even more true in Smallwaukee, where worlds seem to collide on a daily basis. I was reminded of this recently when longtime Milwaukee Journal editorial cartoonist Bill Sanders re-appeared on the scene, contributing his biting satire to OnMilwaukee.

The artist, who now lives in Fort Myers, Florida, has a show of his works on view this weekend, Friday-Saturday, Jan. 20-21, as part of Gallery Night and Day at the Ayzha Fine Arts Gallery & Boutique on the second floor of The Shops of Grand Avenue, 275 W. Wisconsin Ave. You can also see his work regularly on his blog.

Sanders, who won numerous awards and had a varied and interesting career – including a long run as a needle in the side of Milwaukee Mayor Henry Maier – taught me an early lesson in journalism. It’s one I’ll never forget.

In one of Jim Romenesko’s feature-writing classes at UW-Milwaukee, I was assigned to write a profile of Sanders. Because of my meager professional experience, I sauntered into Sanders’ office just north of the short-but-then-significant skywalk connecting the Journal with the Sentinel and proceeded to ask him the most inane of questions.

Understandably, Sanders had little time or patience for this and suggested in no uncertain terms that I do some research and come back with some new questions. It stung at first – and I can still recall how small I felt sitting there next to his drawing table, looking out over the Arena across the street.

But I took his advice and returned to have a great conversation with him, leaving with a cassette he’d made with a Dixieland band in which he performed. More importantly, I emerged having learned a valuable lesson that has served me well.

Now, long after his 1991 retirement from the Milwaukee Journal – after a tenure that began in 1967 (he'd previously worked at the Kansas City Star and the Greensboro Daily News, as well as for Stars & Stripes during his time serving in Korea) – Sanders is back in town and we’re colleagues. You can see his cartoons on the OnMilwaukee Facebook page and other social media. 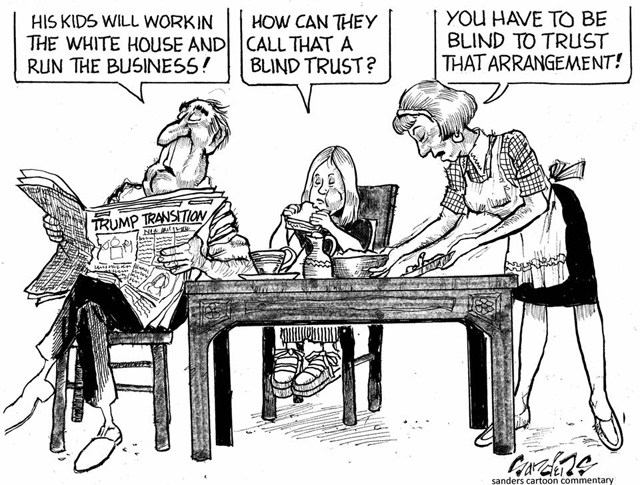 You can also check out his work in person this weekend at Ayzha's "Against the Grain: Timeless Impressions." Milwaukee serves as the second stop for the show, which debuted at Open Grounds Studio in Seaside, California, and it may hit the road again in the future, according to a press release from the gallery.

Though Sanders, who turned 86 in October, won’t be here in person for the opening, he will do a live two-way video link, and his daughter Denese Sanders will appear to talk about her dad’s no-holds-barred work, which has always been unafraid to take on issues of civil liberties and injustice. When Sanders stopped contributing work to the paper, it was Milwaukee’s loss.

I’m glad he’s back on the Milwaukee scene, not only for the journalism lesson he taught me, but also for the daily ethics lessons he offered us all through his hard-hitting commentary and his wicked skills with ink and paper.

You can see the work from 5 to 9 p.m. Friday, Jan. 20 and noon to 4 p.m. Saturday, Jan. 21. There will be refreshments and entertainment. The programs with Denese Sanders are slated for 7 p.m. Friday and 2 p.m. Saturday.