Well into the evening, rising pop star Billie Eilish made a somewhat shocking announcement to the screaming, filled-to-the-brim crowd assembled at the Amp Saturday night: She was "sick as f*ck." Boy, if this is how she performs on a sick night ...

Well into the evening, heading into her song "i love you," rising pop star Billie Eilish made a somewhat shocking announcement to the screaming, filled-to-the-brim crowd assembled at the Amp Saturday night: She was "sick as f*ck."

Sure, maybe her voice seemed a little light in the audio mix – then again, that's just her vocal style, delicately haunting tracks of trap beats, crunchy synths and more like a ghost – but considering the show she was putting on, no one in the audience would've ever known.

And boy, if this is how she performs on a sick night ... 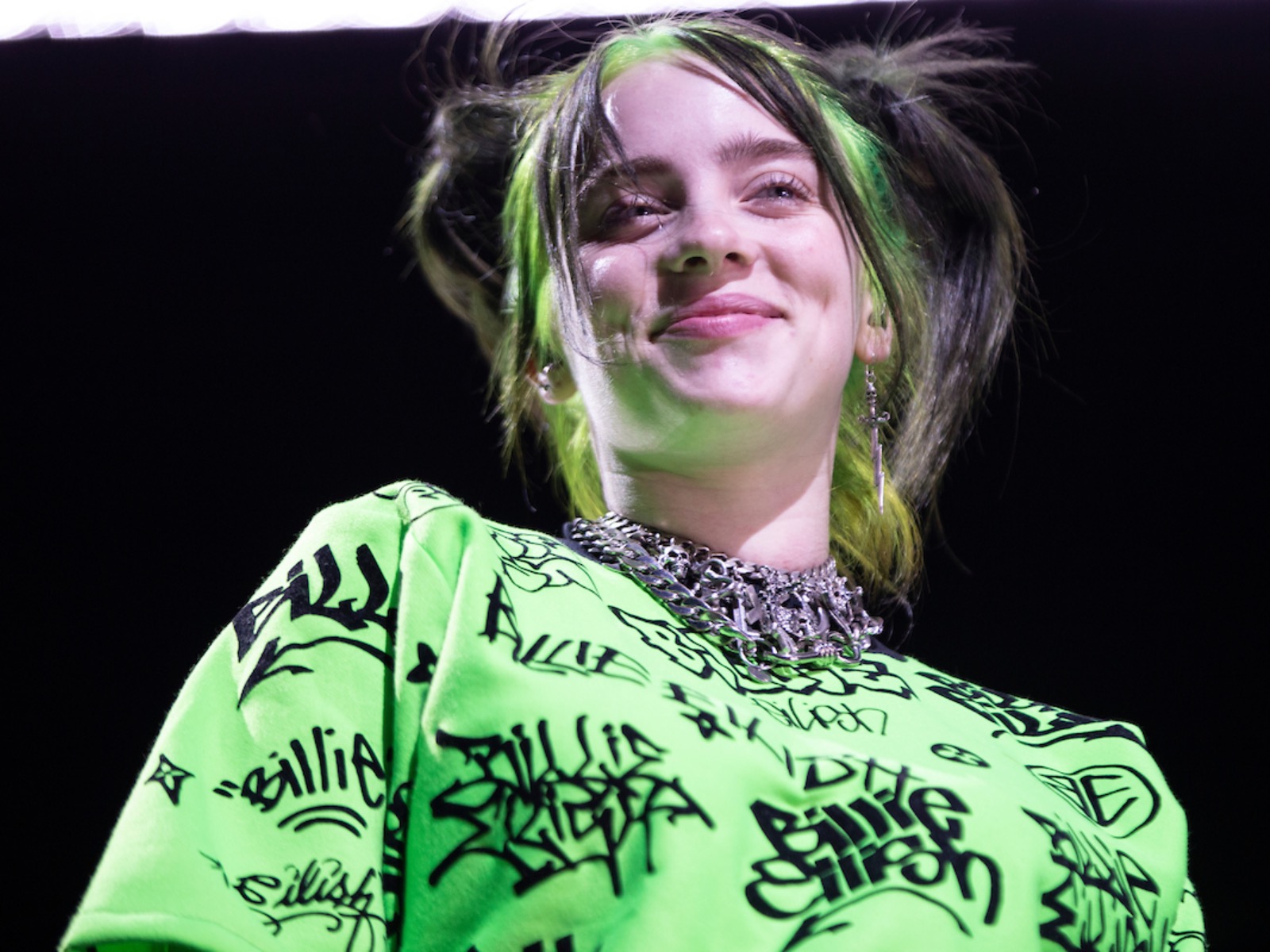 There were more than a few questions for the Los Angeles-born 17-year-old superstar coming into her Summerfest headlining set – her first in Wisconsin. How would such a young act hold up holding down the festival's biggest stage? Would she even really have enough material to fill a headliner's set? After all, she just released her first full album, "When We All Fall Asleep, Where Do We Go?", this past March. Would she put on a show worthy of her blindingly quick ascension to the top of the pop world?

Well, Eilish's voice may often be a whisper, but she resoundingly answered any and all questions Saturday night with a 75-minute set that sent everyone home with their ears happily possessed by her beautifully airy nightmares and their minds convinced they'd just seen the pop world's next big star – the logical antidote to bright, bubbly and colorful peers like Taylor Swift or Ariana Grande, singing about messier, dirtier and darker thoughts and experiences pulled from the shadowy alleys of one's mind, the raw feelings the brain tries to tamp down, almost too much to even dare put down in a diary but less sing aloud.

Introduced by a spooky and ominous black-and-white cartoon that wouldn't have been out of place in the video game "Limbo," Eilish roared onto her stage – surrounded by three screens and a video floor – for her opening song, the playfully eerie monster hit "bad guy." Within one song, the bouncing, skipping and slinking Eilish – decked out in neon green – proved herself more than capable of owning a massive crowd, even as someone barely older than most of those screaming the lyrics back at her from the seats. She's already really good at this, and while her voice maybe registered a touch low in the mix on occasion, that's also just her vocal aesthetic – not that the howling, singing audience would let you miss a lyric anyways. 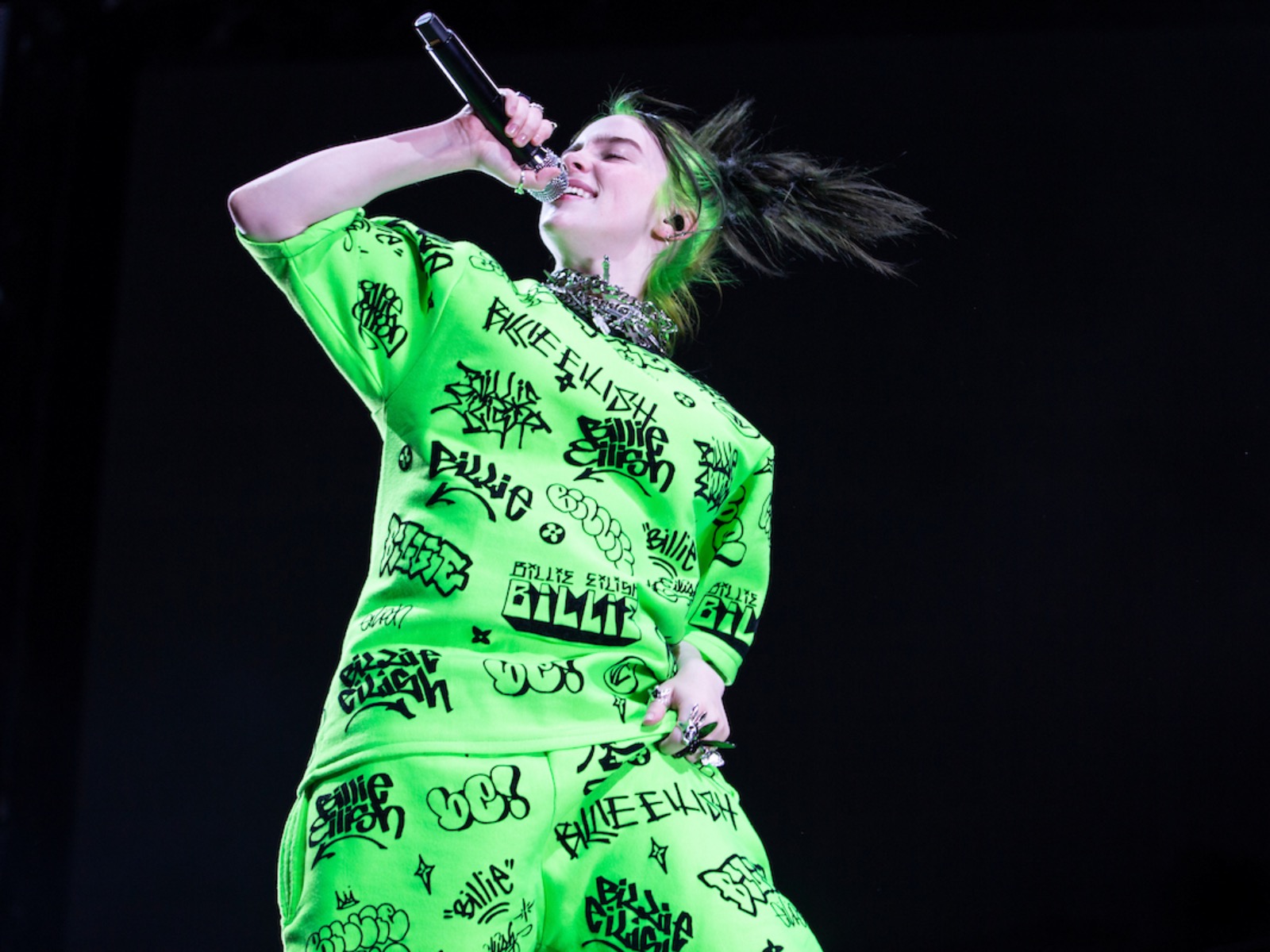 Sounding like Lorde in need of an exorcist, Eilish and her spider's thread vocals kept spinning their hypnotic web through her short but impressively varied catalogue, moving on to "my strange addiction" and the banger "you should see me in a crown" – the latter complete with an impromptu scream session with the audience, though that could've just been a reaction to arachnophobia-inducing eight-legged freaks on the video screens.

For a show filled with creepy spiders, spooky imagery of hooded hellions in a woods, burning baby dolls and a cute big-eyed cartoon grimly sinking into a shark's maw – not to mention the lyrics themselves – there was something peculiarly charming about Eilish's performance. The young singer has a blast on stage, dancing in almost primal ways, eagerly rapping a breakdown from "watch" with a fan near the front and moving her hands like she was pulling a song's words right out of her guts – for instance, on "wish you were gay," a heartbreak ballad with a darkly amusing streak. 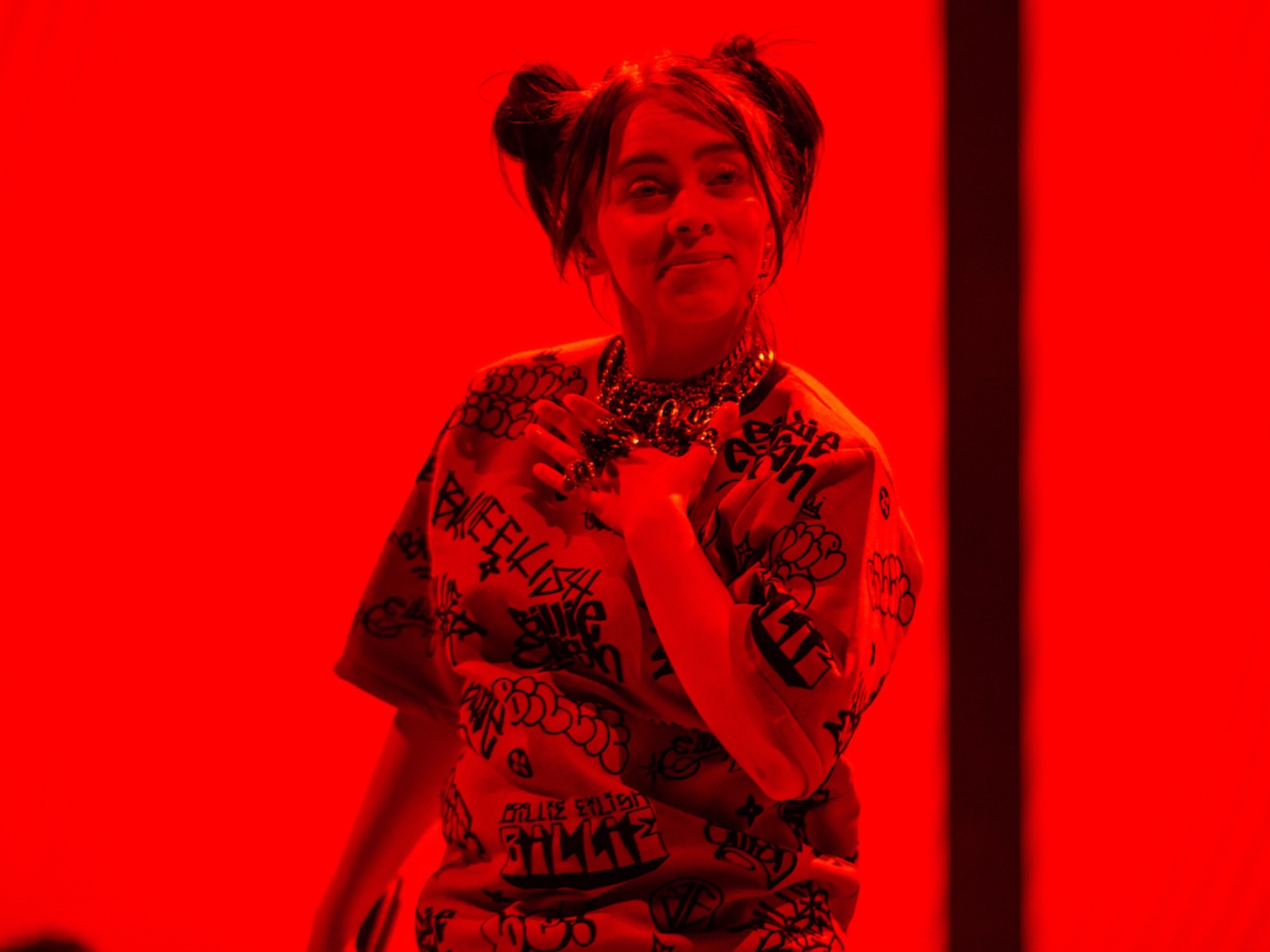 That bleak, oddball sense of humor popped up a number of times Saturday night, including her intro to "idontwannabeyouanymore": "If you absolutely despise yourself, this song is for you." Judging by the crowd reaction, and the glowing cell phone lights popping into the air unprompted during the song, apparently that was quite a few in the audience.

That may sound strange, but Eilish's songs tap into an emotionally honest, conflicted and complicated, self-aware vein of teenage angst. As the pop star preached near the end of the night before "when the party's over," she believes in authentically feeling, and expressing, what you're feeling – whether that's happy or sad, liking something or thinking it's trash. It's clearly a message that's resounded with her fans and her generation, who created the most filled Amp show I've seen of this Big Gig and who made her the youngest solo female artist to top the U.K. album charts.

The middle segment of the show brought out some of Eilish's slower, more moody tracks, doing a kind of impression of a demonic Norah Jones on the possessed music box of "WHEN I WAS OLDER" (inspired by the movie "Roma"), "wish you were gay" and the jazzy "xanny." Even during the slower moments, however, Eilish's whispering voice and potent lyrics mesmerized and captivated the crowd. Plus, the pop star impressively varies her sound and arrangements, hopping from the almost folksy "bellyache" to the blues-hued "bitches broken hearts," making sure the audience was never bored or that the set became monotonous. 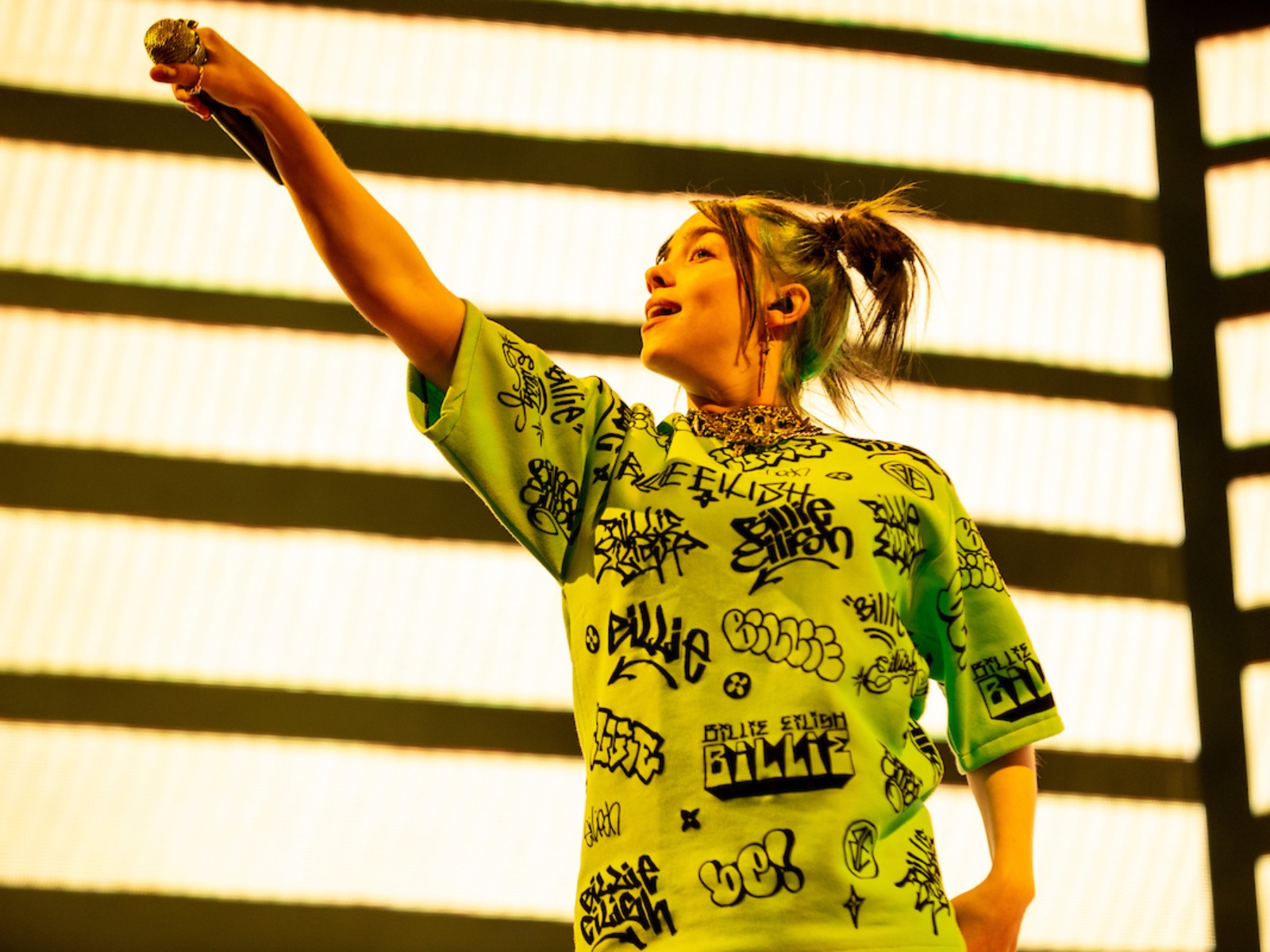 The young star even pulled out some theatrics at the end, performing the tune "i love you" on a bed with her brother/producer Finneas (also the evening's solid tone-setting opener) as an homage to how they originally wrote the song together. It was a sweet moment turned spectacular as the bed eventually picked up off the ground, hovering as if the delicate lullaby had gently carried it into the moonlight. The bed would return for her final number of the night, "bury a friend," lifting back into the air above the stage and even tilting dangerously forward with Eilish carefully keeping her balance (with a sneaky cord's help).

Obviously not the most extravagant setpiece, but it was an effective visual nevertheless perfectly matching the tone of the night: lovely and eerie all at once.

Introducing the penultimate song before, Eilish thanked her crew, drummer, brother and, of course, the loud, adoring crowd. She told the audience she got to watch them pour into the Amp while prepping and waiting in the green room, thanking the fans for unknowingly reminding her how incredible this experience has been for her. The feeling and gratitude was mutual Saturday night.