Psst. You might want to plan a visit for Taco Tuesday. There are Pigtailz-style birria tacos on the menu...

The Truck Stop, the new restaurant at 707 E. Brady St., opened earlier this month with a focus on carry-out (and delivery yet to come).

The street food inspired restaurant is owned and operated by Jordan Stewart and Justin Kling, owners of the successful street food and catering company Street Chefs MKE and operators of the popular food trucks Pig Tailz and Roll MKE. 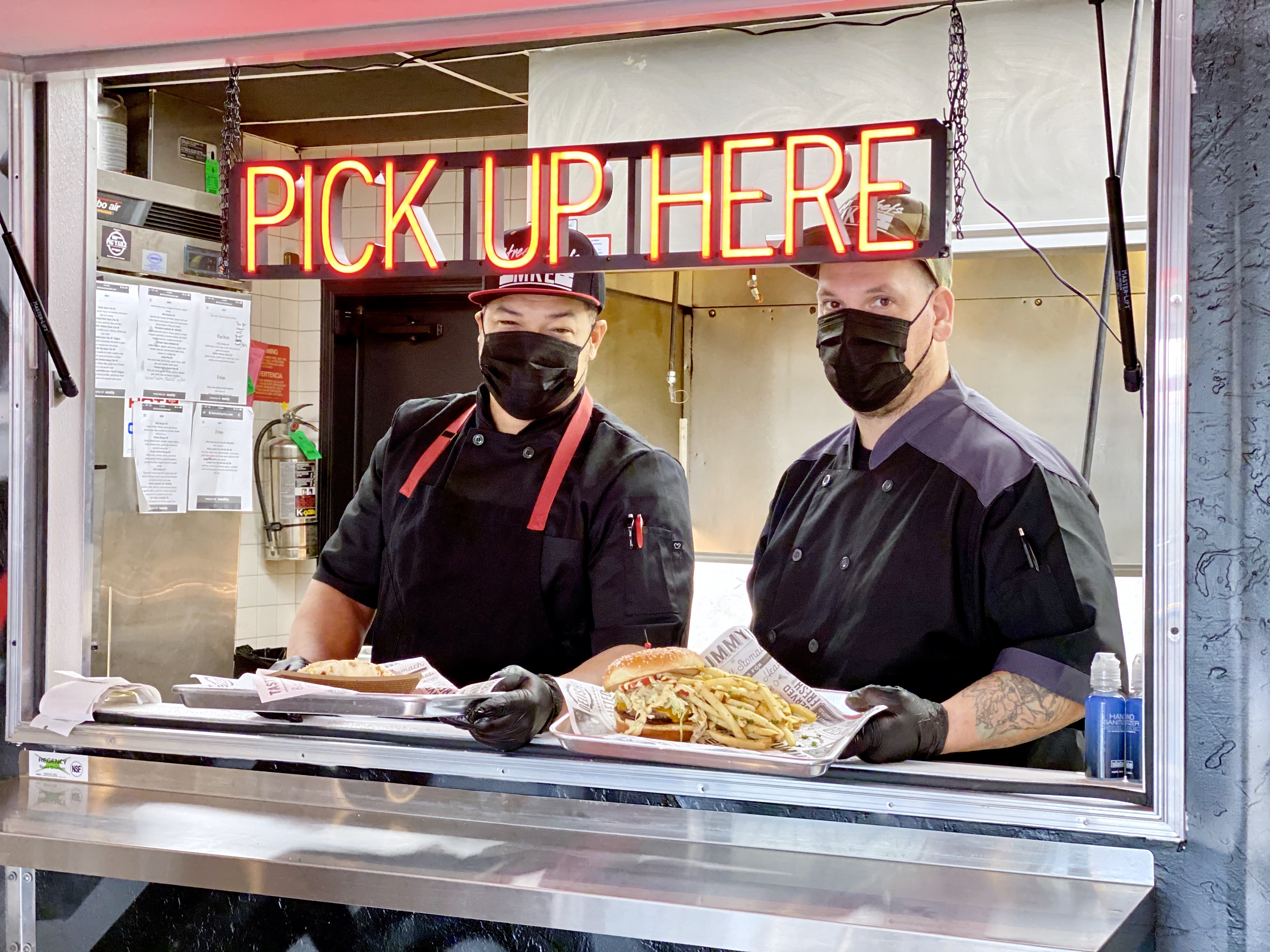 For those unfamiliar with their cuisine, that means a menu of outside-the-box tacos and burgers, plus sides like loaded fries and nachos in a fast casual environment. (Keep reading for more on that menu, plus a peek at their new must-try Taco Tuesday special).

But The Truck Stop isn’t just any restaurant. It was explicitly designed to provide not only the creative, flavor-packed food for which both food trucks have become known, but also a visual experience that merges the charms of street food culture with the benefits of a brick and mortar location.

Take a peek inside and you'll find a bright modern environment with an ordering counter, a pick-up window, and (at least for now), a wide open space with just a few small tables for customers who wish to enjoy their carry-out on premise. 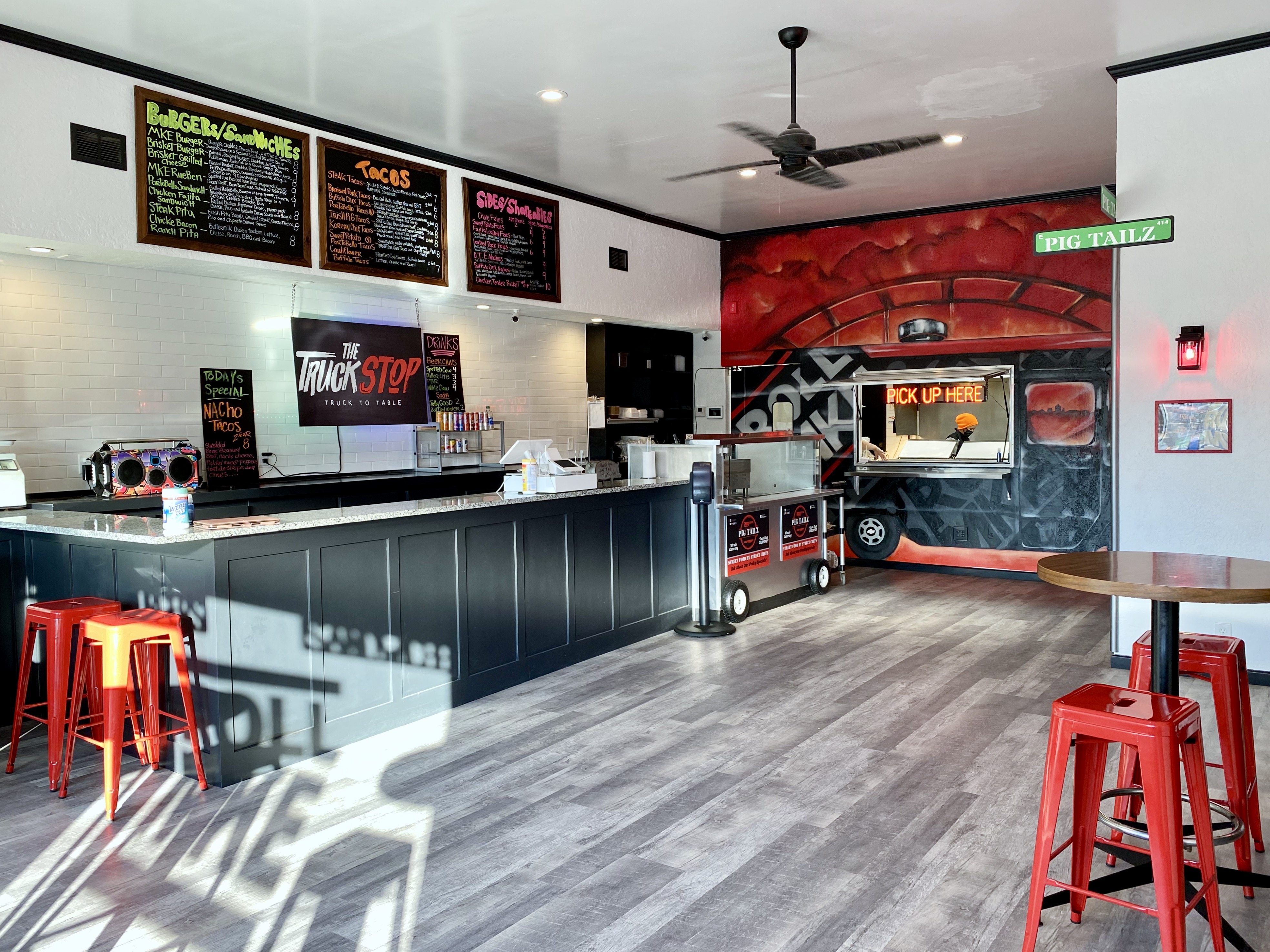 The pick-up window, located on the Eastern wall is enhanced by a near life-sized mural featuring the RollMKE food truck that was created by artists Joe Juarez and Julian Correa. 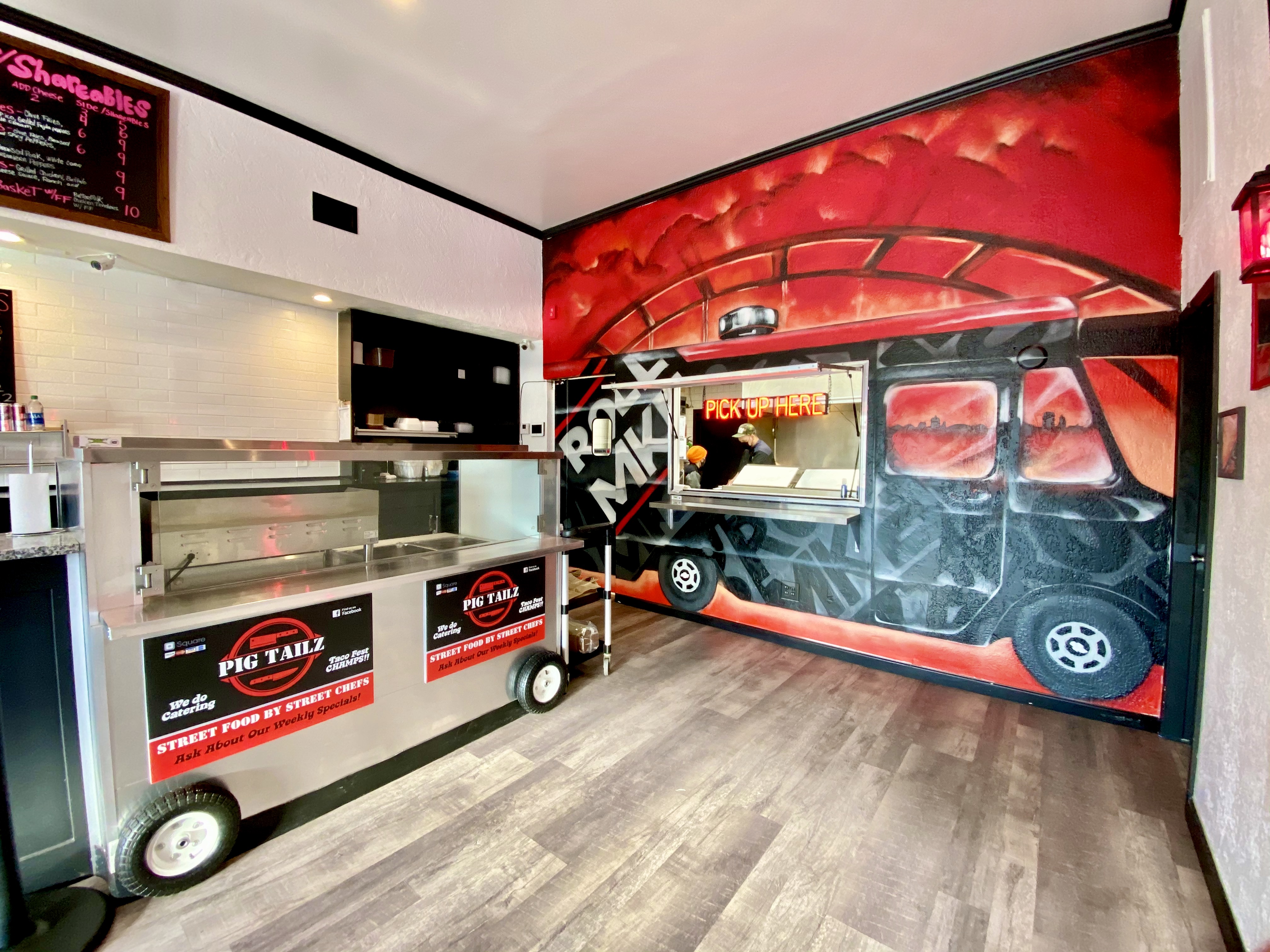 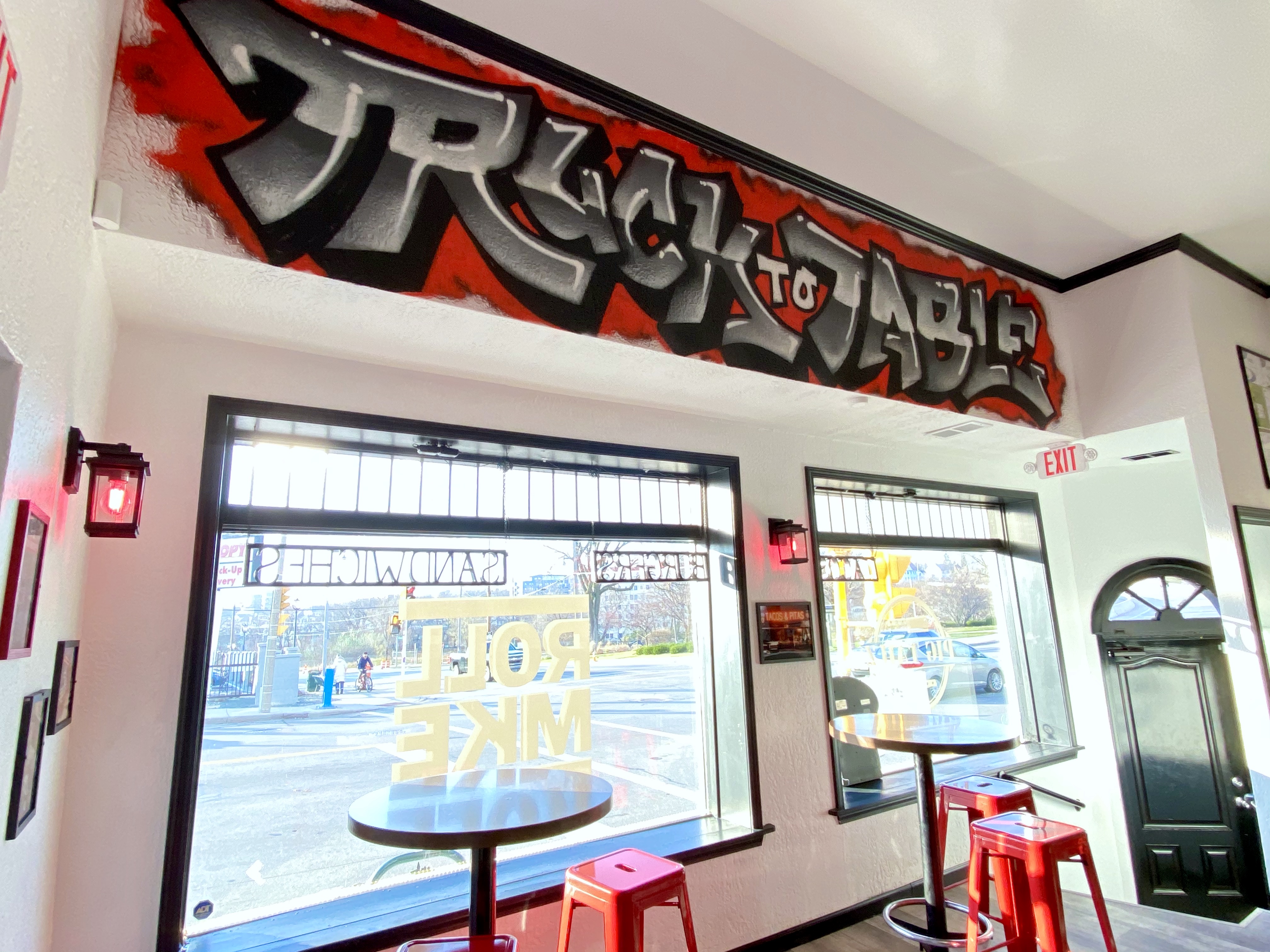 The Southern wall sports a series of photos that trace the history of the Pig Tailz and RollMKE from a hot dog cart to the present. Keep your eye out for the tiny stainless flat-top on display; it’s the griddle from the original hot dog cart.

Other details include a PigTailz street sign (Kling and Stewart’s DIY contribution to the decor) along  with  pops of neon, including a sign that reads: “It was all a dream,” a phrase which Stewart says has been the company’s motto from day one. 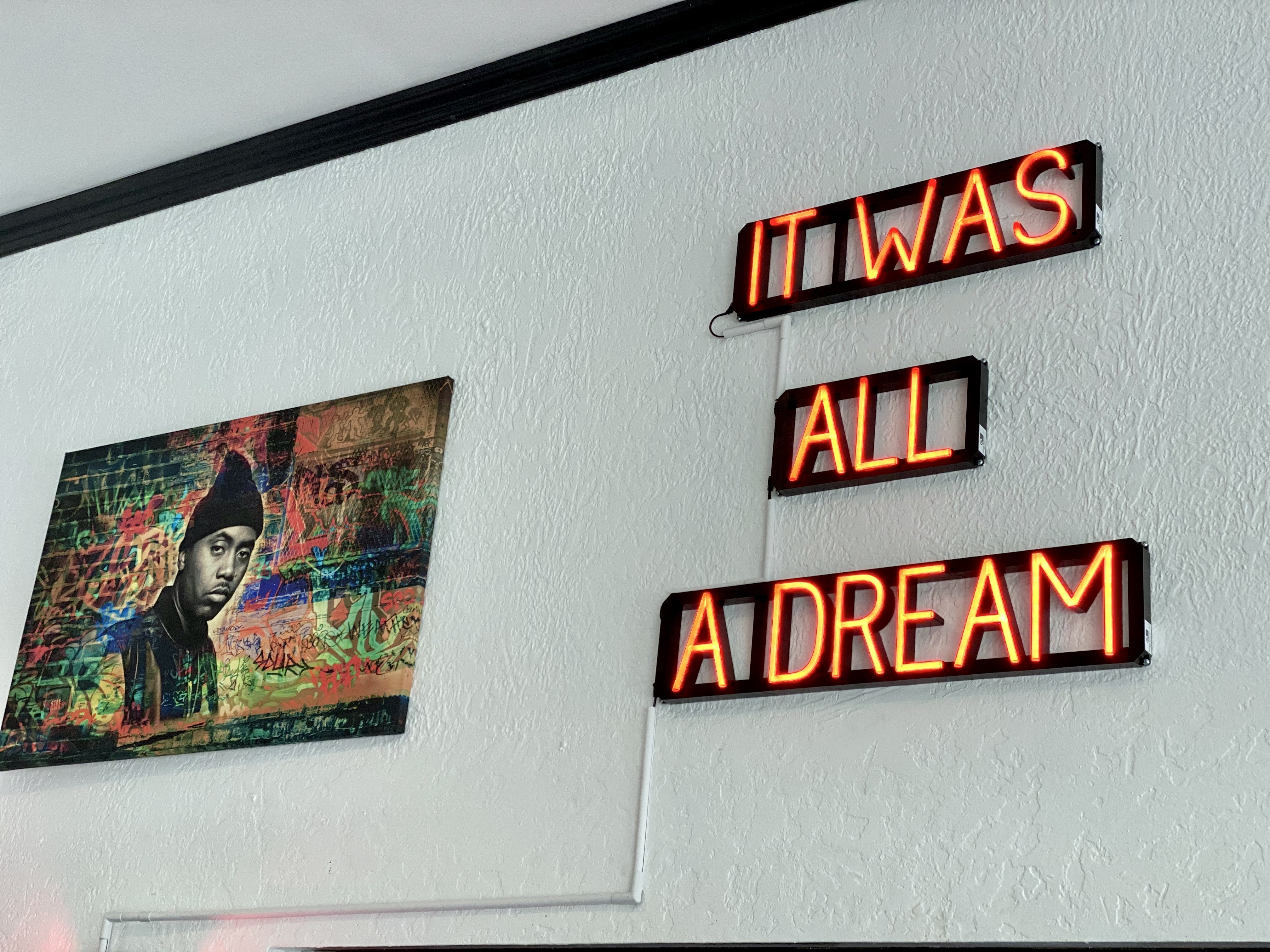 On the menu, guests will find a selection of burgers and sandwiches, from the grilled portobello (with boursin, tomato, arugula, cucumbers, provolone and pesto mayo, $9) and the MKE RueBen (Spotted Cow braised corned beef, pepper jack and Swiss cheeses, bacon kraut and boom boom sauce on rye, $9) to the MKE Burger with cheddar, bacon jam, lettuce, tomato and burger sauce on a brioche ($8). 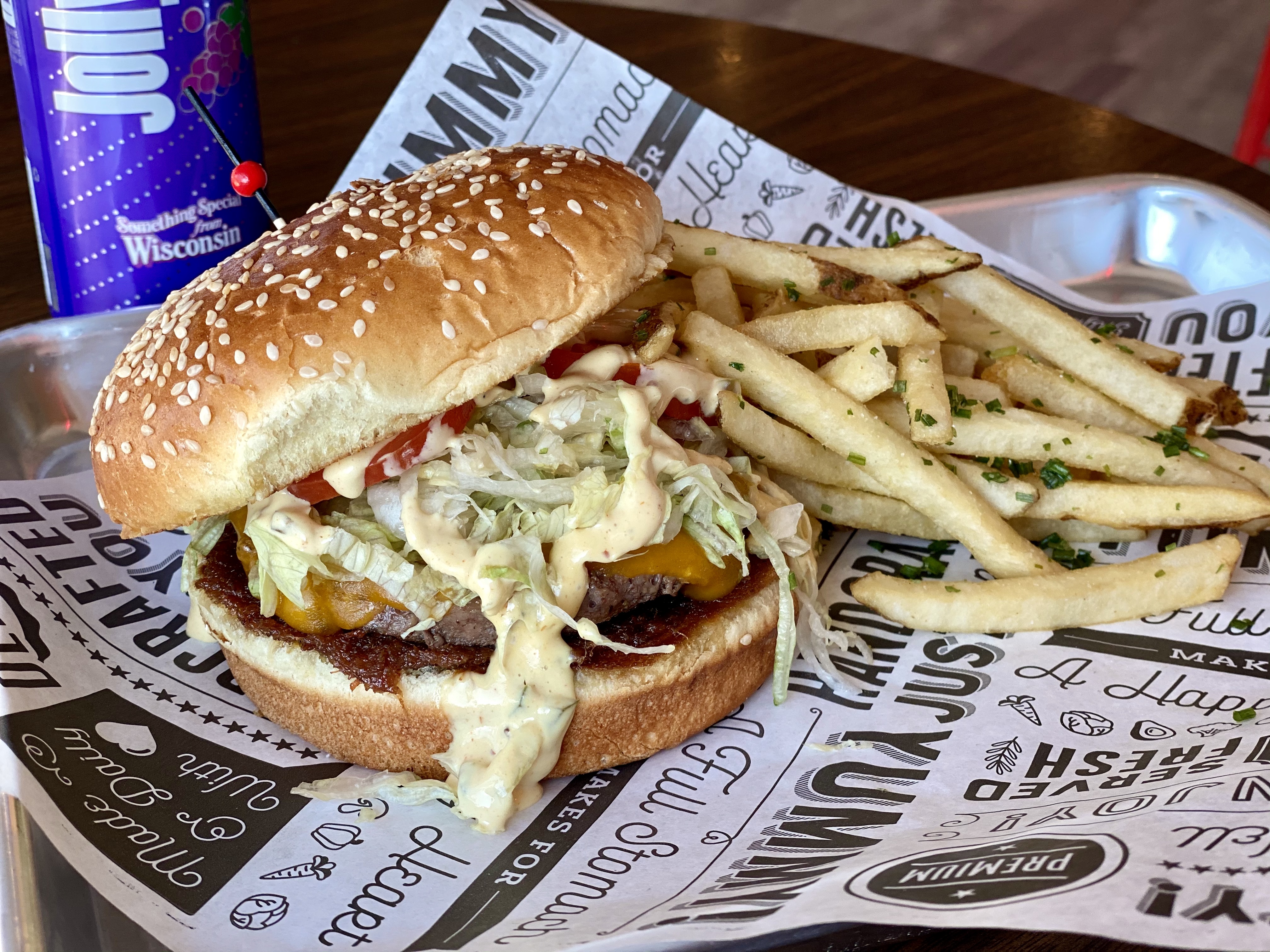 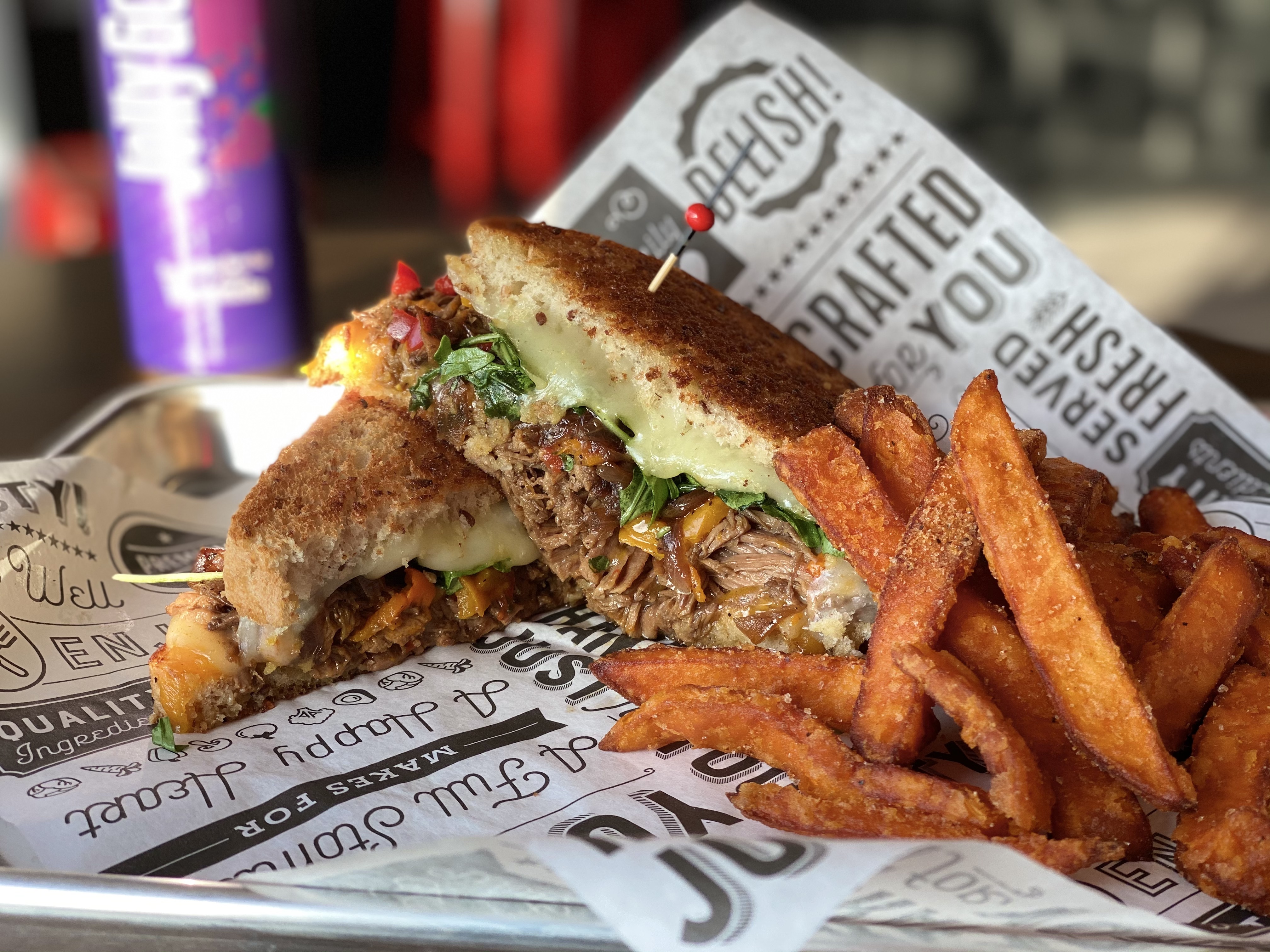 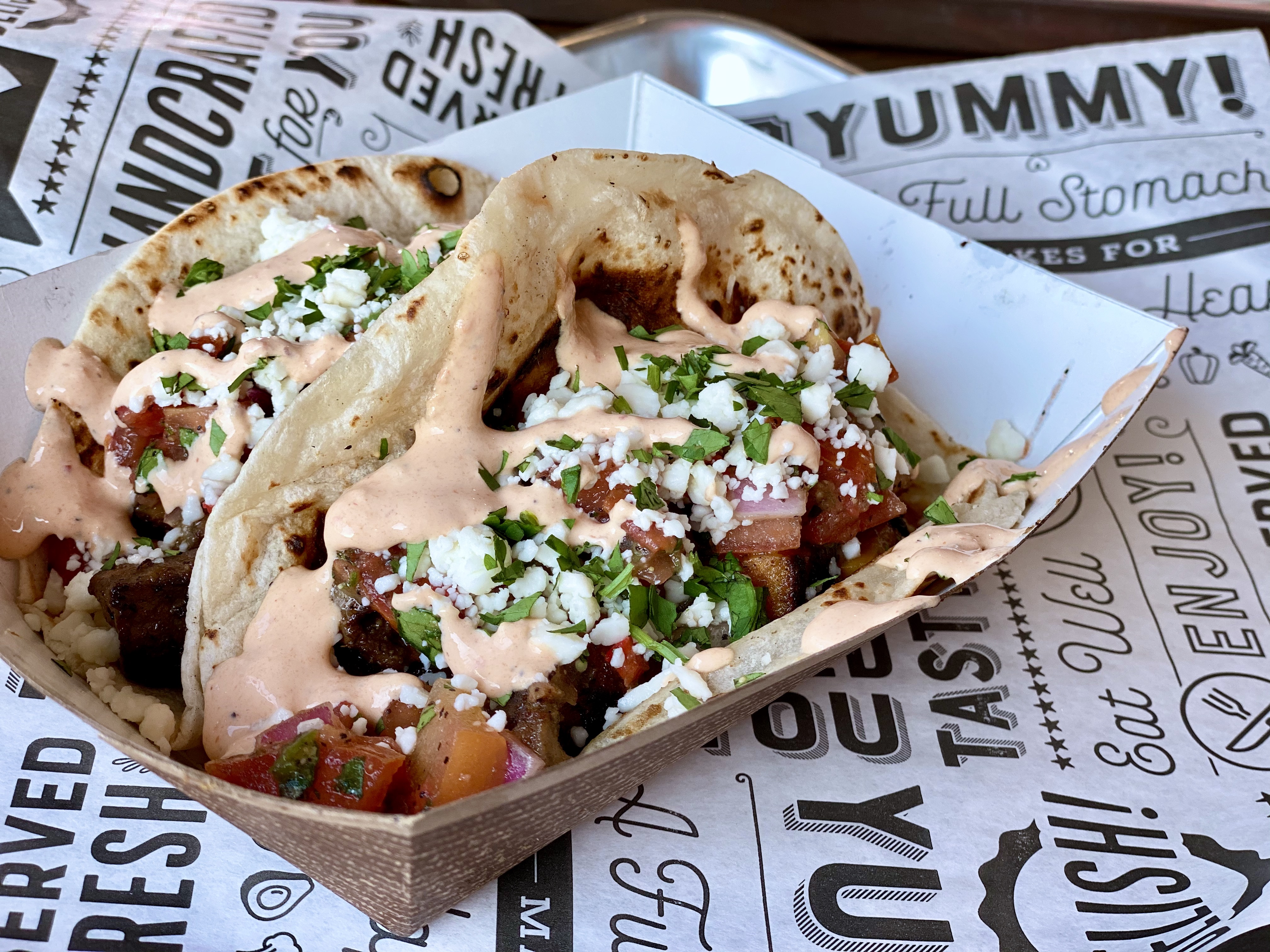 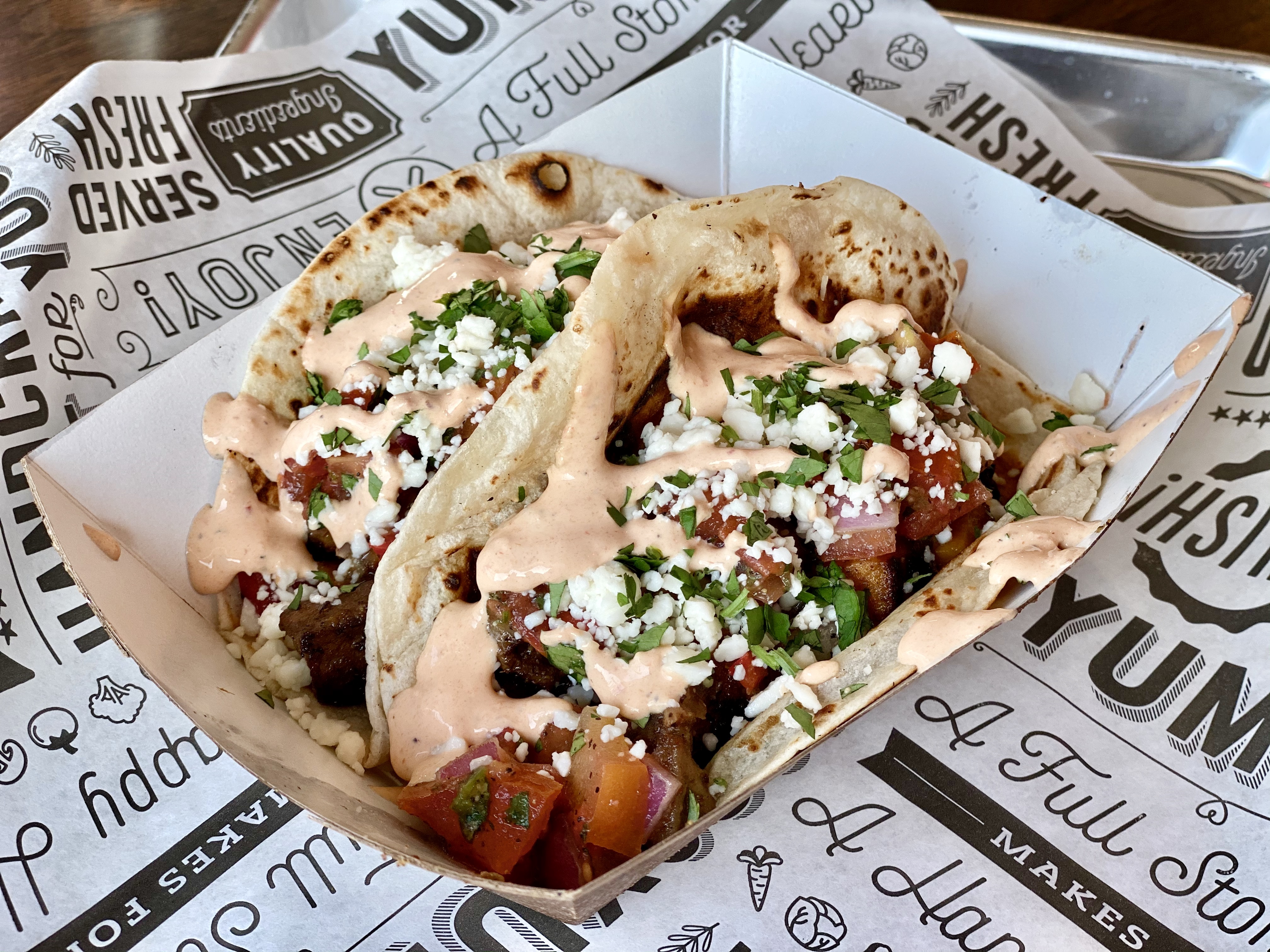 But, yes, there’s more. Beginning Tuesday, Nov. 17, The Truck Stop will be rolling out (for the first time ever) a Taco Tuesday offering unlike any other: The Smokehouse Triple B (beer-braised birria tacos).

The Triple B's begin with a two day process that infuses the meat with flavor. The beef itself is marinated for 24 hours. From there, it's braised in beer with a blend of herbs and spices for six hours before being pulled into braised birria perfection. The beefy beer-infused liquid is then transformed into a bold, beefy, smokey consomme that's perfect for dipping.

But that’s not all. For the first time ever, there’s a PigTailz taco that’s served on a corn tortilla. Two corn tortillas, to be more precise. Each are griddled, covered with melted cheese and then stacked. 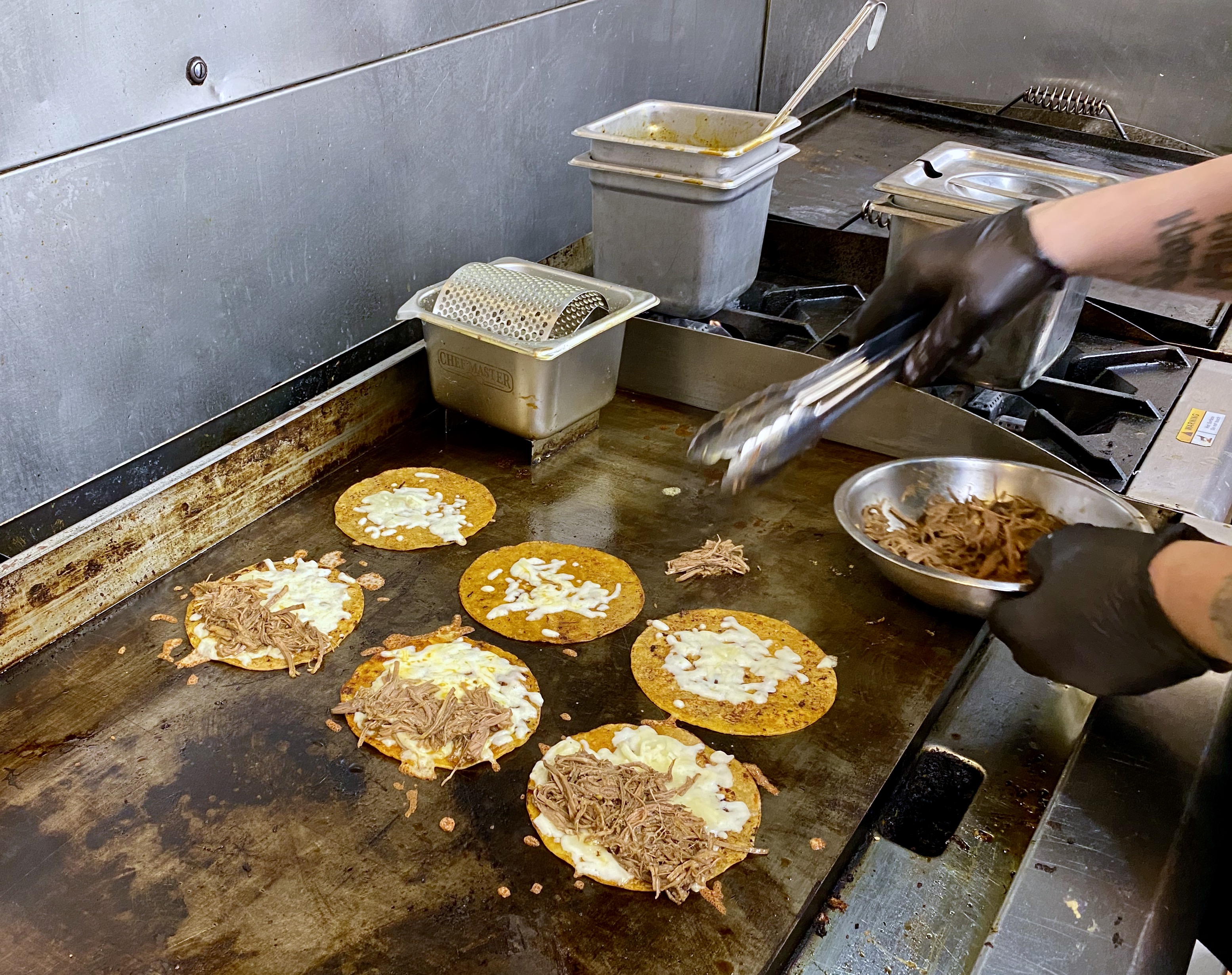 From there, they’re topped with the pulled braised beef, splashed with a bit of flavorful smokey consomme and garnished with cilantro and onions. 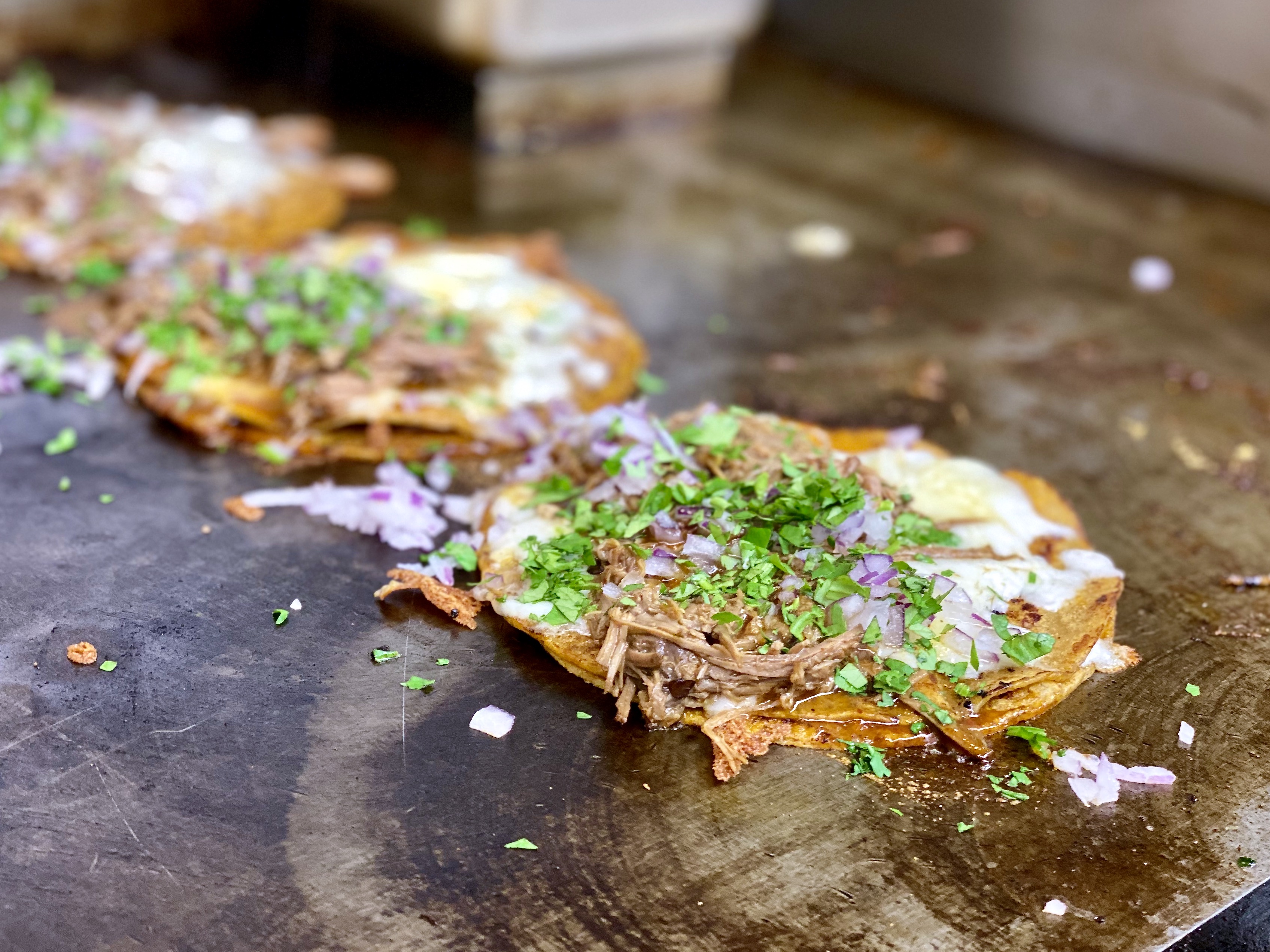 The resulting tacos are big savory cheesy beef bombs that only get tastier when you dip them in the accompanying consomme. (Yes, I tried them. And yes, they’re phenomenal.). 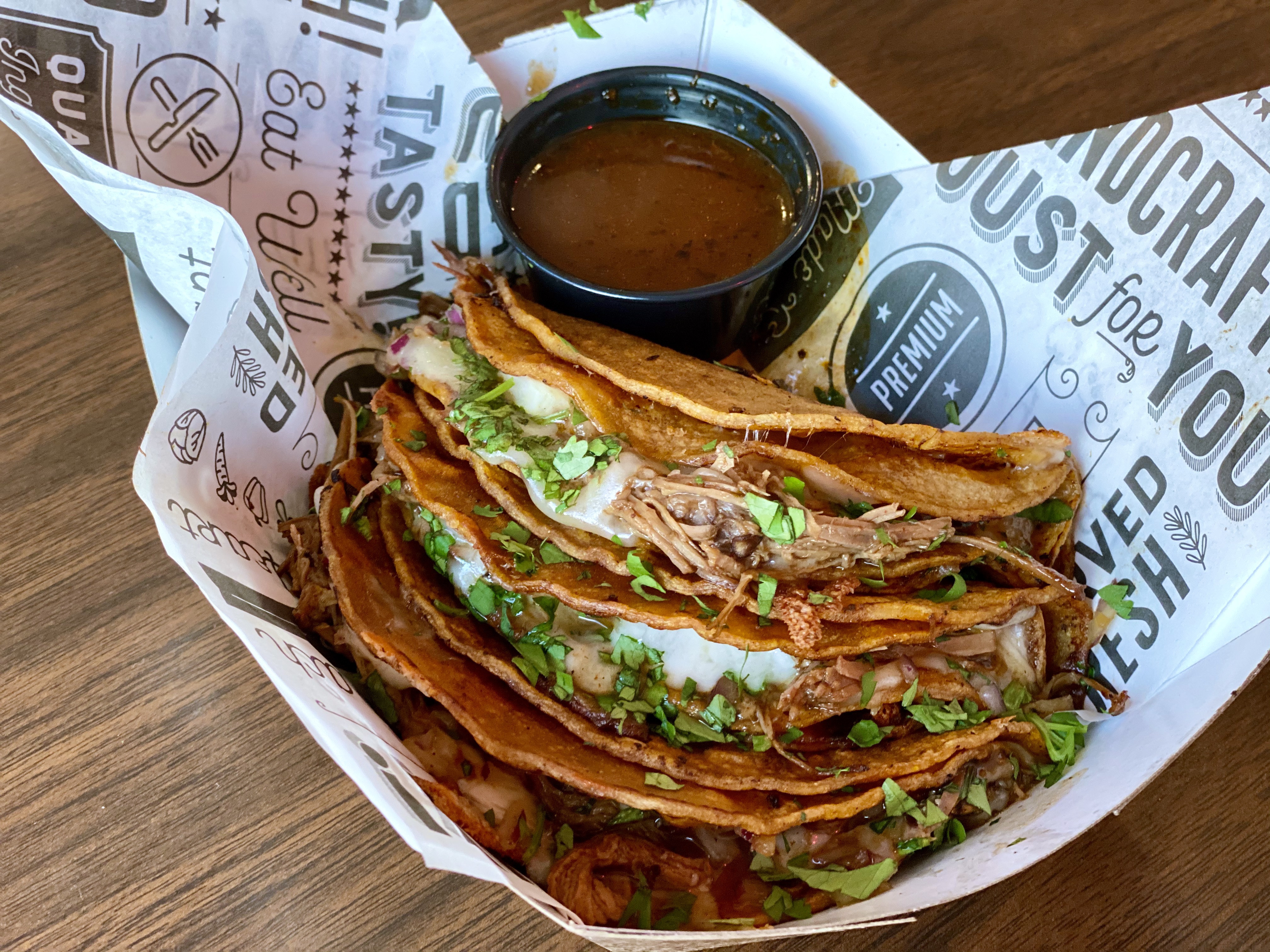 The Smokehouse Triple B tacos are a tough act to follow. But there’s even more on the way in the form of Truck Stop specials. For instance, Fridays are now “Seafood Fridays” and will feature not only seafood tacos, but also a Truck Stop fish fry.

What about the food trucks?

For those wondering whether the Pig Tailz and RollMKE trucks have been retired in favor of the brick and mortar restaurant, the answer is an emphatic “No.” In fact, Kling says they will be participating in select winter events and plan to be back in full force starting in the spring.

Kling and Stewart have also gained permission to install a walk-up window on the Van Buren side of the building,  which they hope will be operational within the next month or so. Once that’s in place, they will offer late night service on weekends until 3 a.m.  Guests can also watch for both online ordering and delivery, both coming soon.

For now, The Truck Stop is open Tuesday through Thursday from 3 to 9 p.m. and Friday and Saturday from 3 p.m. to midnight.

As always, when you visit: Be kind. Wear your mask. And tip well. 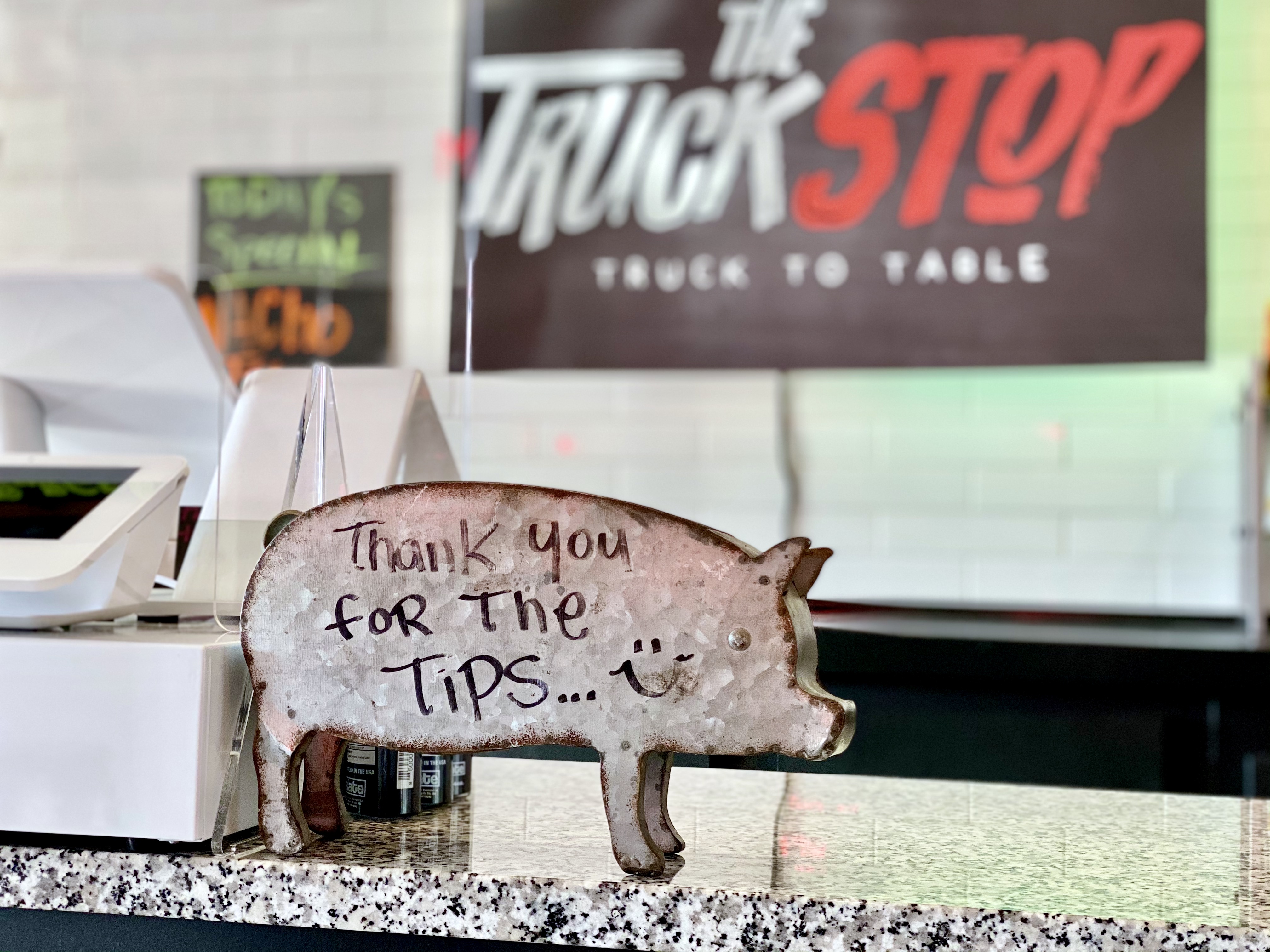