A buoyant Bishop Briggs beguiles at the Big Gig

Bishop Briggs' musical gene may have been sparked at the age of 4 when she gave her first live performance in a karaoke bar in Tokyo. But the rising indie-pop artist has moved well beyond her sing-along beginnings, as her performance at the Brigg's Big Backyard clearly demonstrated.

Bishop Briggs’ musical gene may have been sparked at the age of 4 when she gave her first live performance in a karaoke bar in Tokyo. But the rising indie-pop artist has moved well beyond her sing-along beginnings, as her performance at the Briggs & Stratton Big Backyard (the irony of the stage name wasn’t lost on me) clearly demonstrated.

In fact, in an era when performers are often less compelling in person than they are in a studio recording, Bishop Briggs proved herself an exception. Her live persona was just as genuine and her powerhouse vocals just as crisp and controlled as any of her recorded works.

The Summerfest show was Briggs’ second (she played an early-evening show on the grounds in 2016), as well as her second concert in Milwaukee this year, having performed to a packed house on April 30 at Turner Hall. It was also what could be considered the final show in her "Church of Scars" tour, following her sold-out concert in St. Louis on July 2.

The album, which dropped in April, is a first for Briggs (born Sarah Grace McLaughlin), who recorded her first song, "Wild Horses," at the age of 24. When it was featured in an Acura commercial, the singer-songwriter found herself with a coterie of loyal fans, many of whom had discovered her through Shazam. Her career blew up from there, with the 2016 release of "River," followed by a fortuitous booking as the opening act for both Coldplay and Kaleo and high-profile appearances at music festivals including Panorama and Coachella.

Fireworks still boomed in the background as Briggs took center stage, jogging in place before breaking into an energetic performance of "White Flag" during which she literally ran from one side of the stage to the other, yelling the lyrics in her beautifully raspy voice. 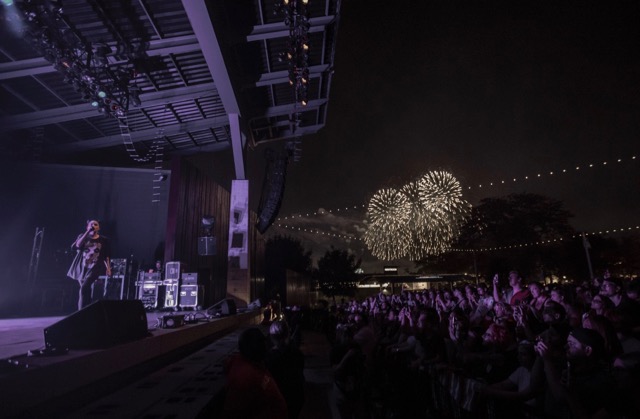 Wearing an oversized Misfits tee, leggings and athletic shoes, she came dressed for her highly aerobic performance. And as she wrapped up her first song, she paused, grinning from ear to ear, to address the audience. Pointing to the sky, which was filled with exploding color, she noted, "I didn’t plan this, but I’m happy about it!"

The stage was relatively spare, featuring a few columnar lights, a black box upon which "Bishop Briggs" was emblazoned in white lettering and her two instrumentalists: guitarist/keyboardist Taylor Van Ginkel and the near frenetic drummer Beau Evans, who spent the show switching back and forth between digital drum pads, snare drums, cymbals and kick drum.

During "Wild Horses," which interspersed a combination of explosive lyrics and dubstep rhythm with percussive clicks and blasts of bass, she interjected screams of "Milwaukee!" and "Summerfest!" betwixt the lyrics, clearly delighted as the crowd sang emphatically along.

"I played here two years ago," she noted in between songs. "And I recognize some of your faces. Milwaukee has always been so sweet to me. It feels good to be back. This is the final day of a long tour, and I couldn’t think of a better way to celebrate."

Much of the set transpired at a Gwen-Stefani-esque pace, complete with nonstop running and jumping, arms flailing, basses dropping and each song giving way to the next with nary a break in between. And yet, the show was doppled with moments of crowd-swaying, singing and introspection that underscored one of Briggs’ strengths: her innate ability to fuse the best qualities of both live and electronic music.

Songs like "The Way I Do," functioned to showcase her impressive vocal range and control, both of which she demonstrated unfalteringly throughout the one-hour set.

Briggs deals in moody minor keys and electronic beats that flip from minimalist to booming on a dime. And there’s a certain brilliance in her style, which takes elements of both EDM and folk and knits them together seamlessly, creating a sound that’s unique unto itself. And that same dichotomous harmony was found in her voice, which fluctuated from vulnerable and sweet to explosive and menacing, often during the same song.

Take for instance her performance of "Be Your Love" which showcased gentle, passionate moments intermingled with blaring beat-infused roars.

And her vocals weren’t the only dramatic element at work. During the chorus of "Hi Lo," as she sings "I’m so high lo, high lo" the bass kicked in deep, offering a captivating backdrop for her powerful vocals. And at that moment, both the stage and the immediate grounds reverberated, not only with bass, but with Briggs' irrepressible energy.

During "Water," a song comprised of somber piano and vulnerable lyrics, she asked the crowd to turn on the flashlights on their phones. And as the onlookers swayed, she beamed in appreciation, thanking everyone with such sincerity that it was as if she was amazed they’d extend her such a kindness. 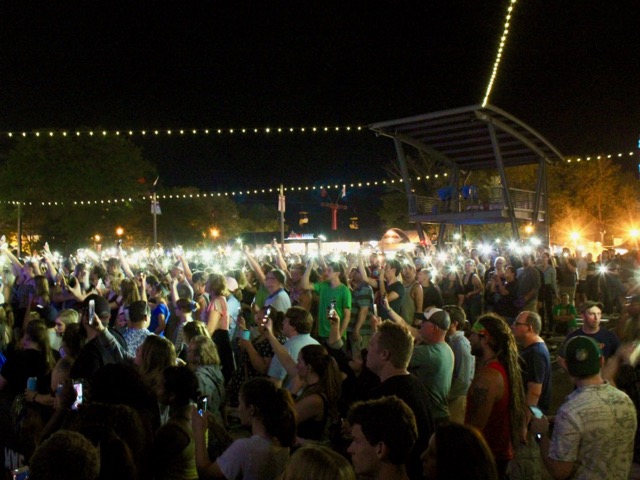 When she belted, she often didn’t close her eyes. Instead, she stared intently, innocently, at the audience, pulling them into her world. She kept the crowd so enrapt that, somewhere along the line, the grande finale of fireworks pounded in the background, virtually without notice, all eyes and attention focused on Briggs.

Her appreciation for fans persisted over the course of the evening, with plenty of thank you's – some to the audience for singing along, others to folks like album co-writer Dan Reynolds of Imagine Dragons, who she credited with being "superhuman." She also expressed her deep respect for his work with the LGBTQ community, noting that at most shows, they keep a donation box at her merch booth, collecting funds for GLAD, a legal advocacy group that supports LGBTQ rights.

"We’re at a festival, and I don’t know that we have one here," she noted. "So please visit GLAD and show your support."

Her stories offered moments for connection. Just before her performance of "Dream," she shared that there was a period in her life when she suffered from a reoccurring dream in which she was screaming, but no one was there to hear her.

"I discovered that the reason I was having this dream is because I was surrounded by people who didn’t support me in pursuing my dreams authentically," she noted. "And I’m going to tell you something that I wish someone had told to me," she added, "You are worthy." And she urged the willing audience to repeat the phrase aloud, resulting in a group chant filled with the mysterious power of validation.

Similarly, as she bounced through the lyrics of the unreleased "Baby," a song she claimed she saved for special occasions like Summerfest, she grinned, as if she were sharing secrets that only the crowd would understand.

She wrapped up her set with an extended version of "River," a veritable singalong that somehow stood in for the usual encore. And despite the emptiness of the stage as she departed, there was enough energy flitting through the air to leave everyone with a little something to take home.