Bistro Z in Sussex aims to delight and surprise

Imagine walking from your parked car - in a relatively ordinary retail parking lot - into a space that blends both elements of the natural world with industrial grit. Add innovative, yet approachable food from a well known Milwaukee chef, and you've got Bistro Z.

A new restaurant coming to Lake Country at the end of August promises to delight and astound diners with both an eclectic atmosphere and creative food offerings.

"It’s experiential" is the theme for Bistro Z, which will be located at W249 N5267 Executive Dr. in the Sussex Gateway retail center. And it sounds like the restaurant will deliver on that promise

Imagine walking from your parked car – in a relatively ordinary retail parking lot – into a space that blends both elements of the natural world with industrial grit.

Black stone walls and birch trees will exist in contrast to rust-treated metal and pipes. A moss wall and a six-foot lava rock boulder will augment a dining room in which diners will read dinner options off of LED-illuminated menus that glow when you open them.

The bar – which will stock a large collection of bourbon and offer an array of craft cocktails, wines and draft beers – will feature one of the first frost rails in Wisconsin, a chilled strip along the bar that assists in keeping beverages cold.

In the world of Bistro Z, everything is designed to continually hit you, to give you something new at every turn.

"We were really looking to transcend the typical Wisconsin theme and give the space a very cool, edgy flair," says owner Craig Pruscha. "It’s based on this sort of idea that man lives in this constant symbiotic relationship with nature, and there are always these beautiful clashes between one and the other."

The concept is something novel for Lake Country, which is best known for its more traditional restaurants and supper clubs. That’s something, Pruscha notes, that he hopes diners from the area will embrace with open arms.

To ensure quality on all fronts, Pruscha has hired an all star cast to head up restaurant operations – including former Harbor House bar manager, Amber Patt, as general manager, Bartholomew Jeremiah (BJ) Marquardt as sous chef and former Buckley’s chef Thi Cao at the helm in the kitchen. 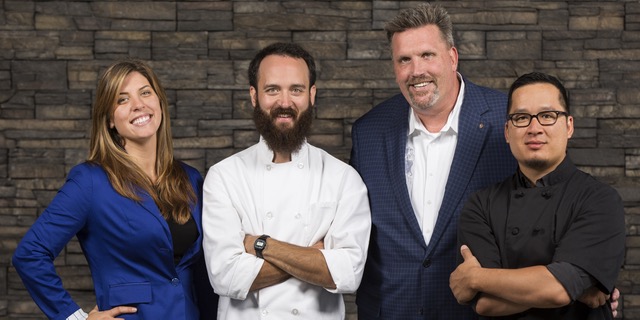 Cao says he’s looking forward to rolling out the menu, which he says focuses on rustic, approachable cuisine that pushes boundaries in terms of presentation and flavor profiles.

"Dishes will be personality-driven," Cao notes, referring to the menu's focused on locally sourced dishes that are inspired both by foods he ate growing up in Wisconsin, as well as flavors he’s experienced through travel to Spain, Italy and Asia.

Food options will include snacks like seasoned nuts and marinated olives, along with chilled corn chowder with leeks, grilled squid, tomatoes and basil oil.

Salads will be fresh takes on classics like Mediterranean inspired heirloom tomato salad and a variation on the classic Caesar salad featuring bitter greens and a poached egg.

Small plates will be plentiful and varied to please both vegetarians and carnivores alike. Options like mushroom panna cotta with goat cheese cream, ginger-anjou pears and pistachio pesto will sit alongside deep fried confited chicken wings with nduja gravy, and lamb tartare with American caviar, creme fraiche and herbs. There will also be a variation on the "Juicy Lucy" burger, as well as a wild boar "Sloppy Joe" featuring Doritos, bread and butter pickles, along with beef fat onions on a sesame seed bun.

Pricing will be moderate, with small plates starting around $6 and entrees around $20.

Bistro Z, which is expected to open Aug. 29, will serve lunch and dinner Tuesday through Saturday. The restaurant will also offer brunch service on Sundays beginning a week or two after opening.