This weekend there will be a brand new West Side bar and cocktail-themed boutique to enjoy. The Bittercube Bar & Bazaar will open its doors to the public on Saturday, Oct. 27 at 5 p.m.

This weekend there will be a brand new West Side bar and cocktail-themed boutique to enjoy. The Bittercube Bar & Bazaar, 4828 W. Lisbon Ave., will open its doors to the public on Saturday, Oct. 27 at 5 p.m.

In June we brought you the news that Bittercube, the creators of locally made craft bitters and masterminds behind the former Dock18 Cocktail Lab, would be moving their production and opening a new bar and retail space in Milwaukee’s Uptown Crossing Neighborhood.

It was good news for the up-and-coming neighborhood, which houses staples like McBob’s Pub & Grill and has become home to a number of new businesses including Scene 1 Restaurant & Lounge and Vennture Brew Co.

It’s also great news for a company which, over the last decade, has built a national reputation for its craft bitters and cocktail consulting program, training countless talented bartenders and assisting bars across the country in improving their cocktail game.

The bar, tucked inside the new Bittercube facility just behind its window-laden retail space, sports a streamlined modern look comprised of light woods and neutral tones. Co-founder Ira Koplowitz says the overall vibe was inspired by an Izakaya in Quebec City that he visited last April. 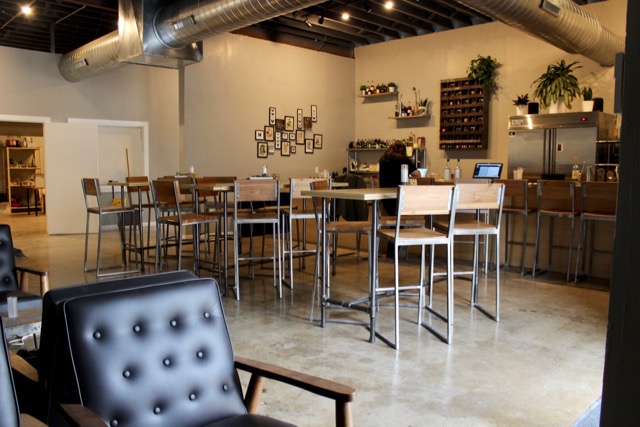 "I was really inspired by the minimalism and design," he says. "It was simultaneously inviting and austere … and the more I thought about it, the more it made sense to apply a similar aesthetic for this warehouse-style space."

That minimalism sets the tone for the seating area, which features three long, versatile high top tables along with modern lounge seating and a bar that seats nine and accommodates five to six people at an adjoined bar rail.

Decor is simple but welcoming and includes little touches like small pots of succulents on bar tables, trailing plants and art that offers a nod to Bittercube’s focus on creating products with fresh fruits and natural whole botanicals, rather than chemically-derived extracts. 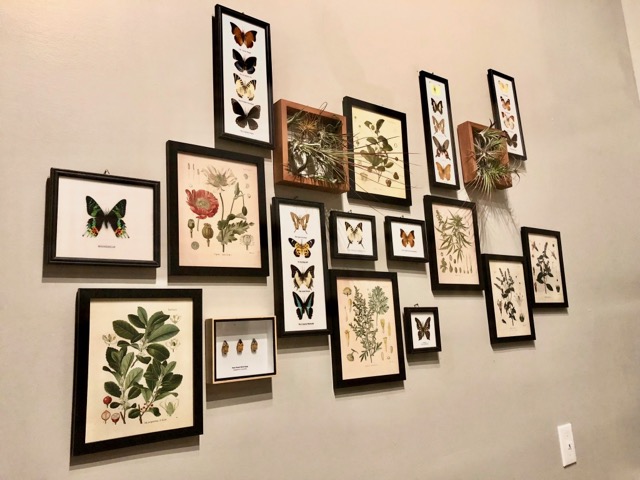 Guests might be surprised to note that there’s really no traditional back bar.

"We really want the focus to be on the cocktails, not on all the things on the back bar," notes Koplowitz. "In fact, the idea was to create this kitchen-like feel throughout the bar." 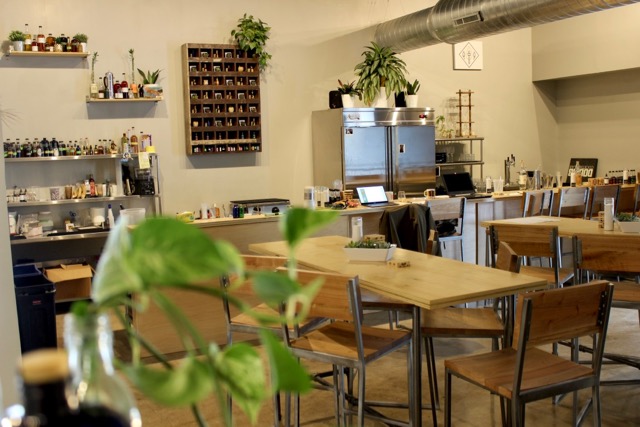 Instead, the space sports an upright cooler, three taps (pouring housemade ginger beer, a seasonal elixir and a rotating beer from a local brewery), shelving filled with succulents and bottles of bitters and – on the eastern end of the bar – an active work area with stainless steel counters where the magic of product and cocktail development can take place during the daytime hours.

Meanwhile, the retail portion of the business – a shop called The Bazaar – offers a boutique style shopping experience in a vintage-inspired atmosphere.

The back wall of the boutique features a Milwaukee map etched on repurposed wood. Details include a vintage cash register, myriad plants and shelving made from repurposed ladders.

The store is set up to resemble a bar, and that’s purposeful. Customers can try out various items or get a lesson in making the best use of them before they purchase. 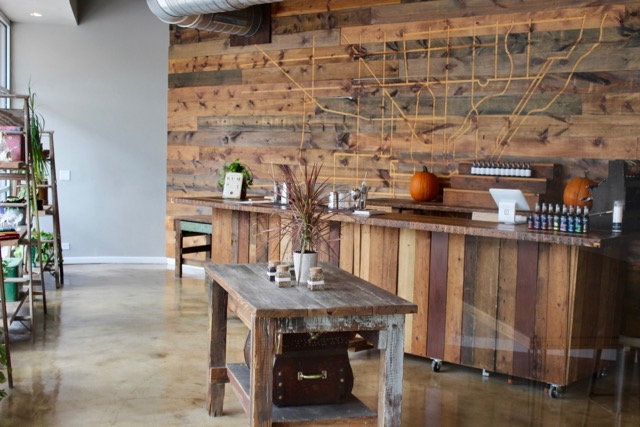 Once the shop is fully stocked, it will feature a variety of products from high quality and esoteric spirits, Bittercube products (cocktail kits, bitters, soda essences and elixirs), cocktail-related tools, books (including cocktail-related and culinary tomes) and a selection of vintage gifts and glassware.

The concept stems, in part, from a dearth in the market of places for bartenders to go for last minute supplies and quality tools. While many local liquor stores carry basic bar tools, The Bazaar will specialize in higher quality tools made to stand up to regular use. The venue will also act as a resource for bartenders and curious home cocktail enthusiasts. 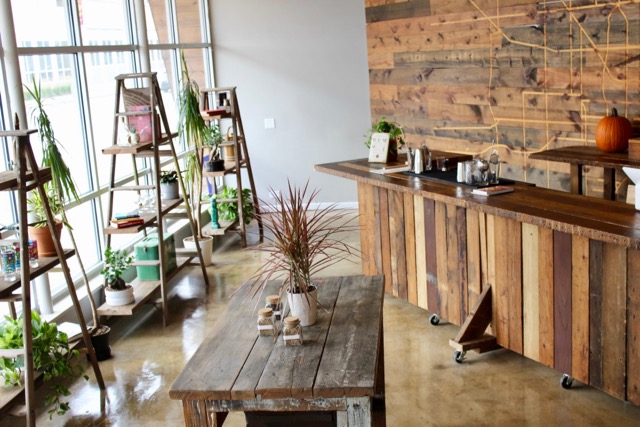 "Beyond just being a place where you can buy spirits and ingredients, we really want this to be a resource for bartenders and home cocktail enthusiast," notes retail manager Kylen Eberlein. "The store will be run by bartenders as well, so the staff will be available for customers to pick their brains and offer advice about products and their uses."

Each spirit category will be accompanied by signage offering detailed information customers can reference to learn more about their ingredients and the processes with which they were made.

In store tastings and cocktail demonstrations will also be held on a regular basis at The Bazaar. An official schedule is available at Bittercube.com and events are broadcast on the brand's social media channels, including Facebook, Twitter and Instagram.

"The bar is still a tasting room," says bar manager Brandon Reyes. "But this time it’s a tasting room for all of our Bittercube products, essentially everything except for the spirits."

That includes Bittercube bitters, elixirs (cocktail mixers), soda essences (seasonal botanicals which can be used as a flavor booster in cocktails, an addition to selzer or to make homemade sodas with the addition of simple syrup) and housemade tonics.

Guests will find a cocktail menu that’s divided into sections: Tailor Made Apothecary, Selections from the Bazaar, On the Fly Elixirs, The Consulting Corner and Dock18 Cocktail Lab. 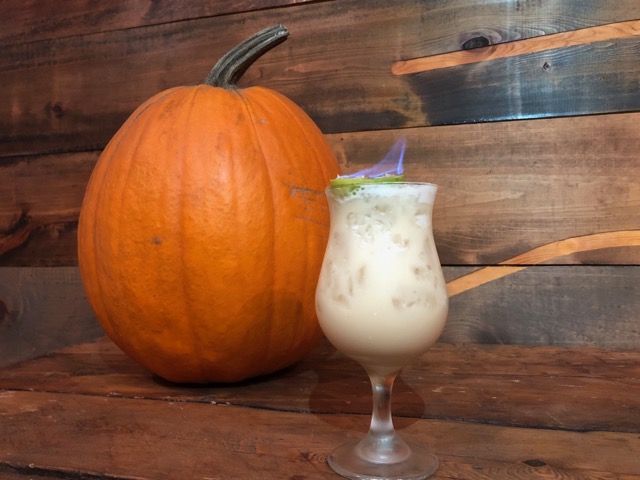 Tailor Made Apothecary features riffs on classic cocktails that are made with exacting Bittercube formulations using selected Bittercube products like housemade seasonal tonic and soda essences. Among the selections is a highball featuring blended Scotch and their Winter soda essence which features notes of orange, cinnamon and chocolate.

Selections from the Bazaar features cocktails made with spirits and products – including bitters and smoking cedars – that are available for purchase in the Bazaar retail space. Take for instance their whimsical take on the classic Boulevardier featuring a beautiful floral garnish and popping boba.

Cocktails under the On the Fly Elixirs header showcase best practices for use of Bittercube’s On the Fly elixir program, which features tap-ready elixirs that can be mixed with spirits and garnished in the blink of an eye. Selections include a Peated Gin Sling with Bombay Sapphire, Glenlivet Founders Reserve Scotch, grapefruit lime elixir, Cap Corse Quinquina, seltzer and Bittercube Trinity Bitters.

Bittercube’s national consulting program, run by Koplowitz and co-founder Nick Kosevich along with a dedicated team of bartenders, is also showcased in the cocktails listed under The Consulting Corner. Features include the Three Button Chill, a mezcal-based cocktail created in collaboration with Scratch Kitchen & Cocktails in Norman, Oklahoma; Holi Bhang, a rum and rye cocktail styled with Mortar & Pestle Bar in San Jose, California; and Mason Dixon, a peanut buttery riff on rum and coke which could soon be seen at the Hewing Hotel in Minneapolis.

Meanwhile, fans of the former Dock18 Cocktail Lab will find a list of crowd favorites and unique creations made with products that are continually being further researched and developed by Bittercube staff. Among the selections is  the Low Tide with purple carrot and celeriac infused gin, vermouth, sea brine granita and Modest Bitters Batch No. 3.

Exterior signage has not yet been posted on the Bittercube facility, so you’ll want to keep your eyes open for the low profile building, which is located on Lisbon Avenue at 49th Street. The building is next door to the Alpha Women’s Center and across the street from the Milwaukee Police Department District 3 Offices.

Public parking is available in the parking lot on 49th and Lisbon, just across the street from Bittercube and adjacent to the police station. Once parked, you can enter the premises through the main door on the front of the building.