Tonight Kevin Sylvester wore a black T-shirt that said, "I defy stereotypes," and indeed, he and Wilner Baptiste did just that playing their Summerfest set at the Johnson Controls World Sound Stage Thursday night.

To listen to the recorded music of Black Violin, a hip-hop duo composed of two classically trained stringed instrumentalists, is an extremely different experience than seeing them in person. To put it differently, if a picture is worth a thousand words, the imagery of a Black Violin concert is worth a billion – although I promise this review won’t be quite that long.

"We put two worlds together," Kevin Sylvester – aka Kev Marcus – told the packed audience tonight after taking the Johnson Control Stage at 8 p.m.

Sylvester, who is a violinist, was referring to the group’s undefined genre of music, which mashes classical with hip-hop and, sometimes, pop and soul. Tonight, he wore a black T-shirt that said, "I defy stereotypes," and indeed, he and Wilner Baptiste, a viola player who goes by the stage name Will B., did just that.

To see men move so gracefully and masterfully between the beautiful melancholy of classical music and the hands-in-the-air, lyric-driven urgency of rap was unlike anything I’d experienced before. 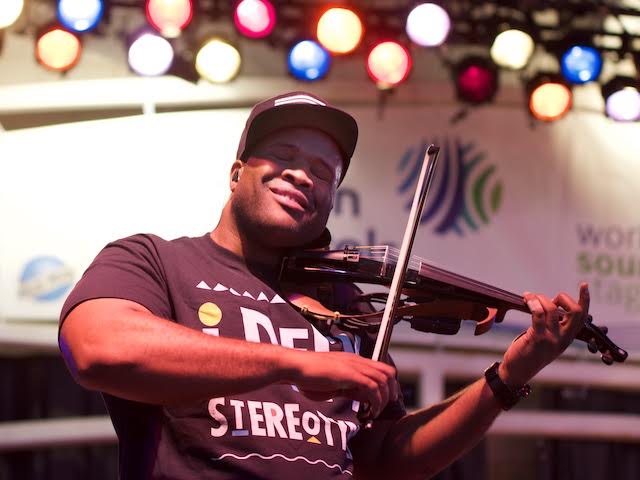 Sylvester kicked off the show by informing the audience, "This is a party, Milwaukee," and continued to play an energized, hour-plus set during which he never stopped smiling and Baptiste never stopped moving. Both men often encouraged the audience to clap along or initiated call and responses. 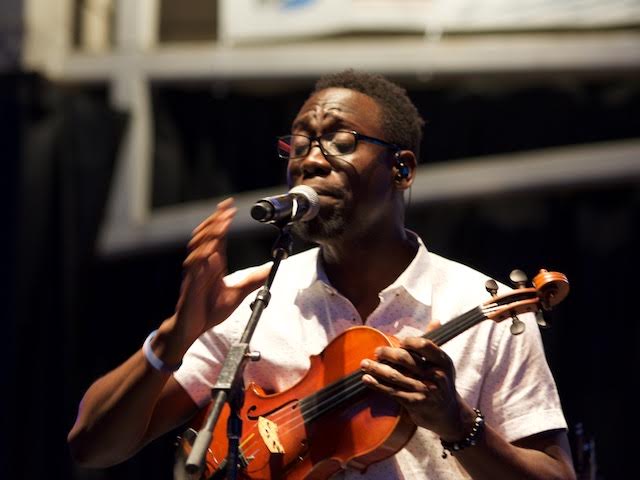 The set list drew heavily from their latest album, "Stereotypes," and Sylvester and Baptiste were backed by a drummer and a DJ to whom they gave props often and wholeheartedly.

Gems included the opener, "Dirty Orchestra," a funky, countrified ditty, followed by "A Flat," which featured the first of many friendly face-offs between Baptiste’s viola (whose name is Tiffany) and Sylvester’s violin. During those moments, the two men stood facing each other, ferociously fiddling.

Other songs included an Ed Sheeran cover, "Thinking Out Loud," mixed with Marvin Gaye’s "Let’s Get It On," which Baptiste introduced as a serenade to Tiffany the viola. "She deserves it," he said. "Tiffany pays my bills."

Later, they covered an electrifying version of Mark Ronson’s "Uptown Funk" and went on to serve up originals including "Another Chance," the R&B ballad "Addiction," "Magic" and "Invisible," which featured Baptiste’s impressive keyboarding skills.

"Invisible" was particularly political, powerful and haunting, with the repeated lyrics, "I’m not invisible."

"We made this song for anyone who feels oppressed and to remind you that you are not invisible," said Sylvester. "You just need to scream louder."

Earlier this week, I read reviews documenting an encore cover of Michael Jackson’s "Beat It," which I was disappointed did not happen tonight.

Originally, neither of the men set out to be stringed instrumentalists. Sylvester’s mother took him to a violin class in 5th grade, when she thought he was starting to show signs of trouble-making even though he admits he thought, at the time, the instrument was "uncool." Baptiste wanted to learn saxophone as a kid, but accidentally was signed up for viola, so he decided just to go along with it.

Sylvester and Baptiste met in high school, went to different colleges and then later reconnected to form Black Violin. They both live in Florida.

"Our mantra has always been to engage the audience to look at things from a different perspective. At first, we leaned on the fact that we were different – more than on our technique. We wanted you to be confused," Sylvester said. "This time, we tried to keep our core message, but with more gravitas, more seriousness. Not just be crazy and different, but really step it up and be bad-ass violinists."

Black Violin's music has been featured on TV shows like "CSI: NY" and in a Vitamin Water commercial featuring basketball star LeBron James. They’ve performed with Queen Latifah and Kanye West, won the "Showtime at the Apollo 2005 Legend" title and played for President Obama.

But tonight, they were all ours in Milwaukee – and they had a lot to say to the adults and the kids in the audience.

"No matter what you love to do, do it over and over and over in a way no one else has ever done it and, eventually, someone will pay you for it," said Sylvester.

The group played a fair share of classical music tonight, but if I were to pick a single classical title to sum up the experience it would be "Ode To Joy." Hands in the air, y’all.