The Bay View dining scene is experiencing some significant shuffling, as two local restaurants make strategic moves to new spaces, making room for yet another addition to the scene.

After 11 years, Honeypie Cafe is preparing for their debut in the newly renovated building at 2569 S. Kinnickinnic Ave. (that’s the former Alchemist Theater), which is now expected sometime later this spring or summer.  In turn, Belli’s Bistro & Spirits is preparing to reopen in Honeypie’s former quarters at 2643 S Kinnickinnic Ave.

New restaurant pays homage to past

Meanwhile, an entirely new concept is taking shape in the former Belli’s Bistro at 3001 S. Kinnickinnic Ave., with Blackwood Brothers Restaurant and Social Club hoping for an opening by the end of April.

Behind the Blackwood Brothers concept is service industry veteran Sherrilyn Law, who has spent the past 20 years working as cook, bartender and server, while dreaming of opening her own bar or restaurant.

“Every summer we go on a big camping trip to Door County,” Law says. “And I’ve really grown to love it there. In fact, a few years ago I started envisioning a concept that I thought would be perfect for the area.”

But Law says that things took on a different shape when she had the opportunity to tour the historic Bay View building,  which dates back to 1910.

“I’ve always been curious about the building,” she says, “And walking through it, I saw so much  potential… and that made me excited. I could envision exactly how it would look, and from there everything else really just started to fall into place.”

Her excitement grew when building owner Mario Malcara of Badface Development told her he had the original sign from the building, which had housed Blackwood Bros. Hardware Store.

“I hadn’t yet settled on a name for the concept,” says Law. “But when I saw the name, it spoke to me. It captured this sort of rustic, almost saloon-style feel. And I just really liked that. It fit so well with the concept that was in my head.”

The bar and restaurant will see mostly aesthetic changes; but Law is also reconfiguring the kitchen and adding new equipment to make it more efficient and functional for her needs.

She says the goal for the dining room and bar area is to create a comfortable rustic space. To create that feel, she’s replaced the sunshine yellow walls with warm grey that will be set off against reclaimed wood accents and walls filled with old tools, repurposed old windows and lots of live plants. Custom built tables and booths made with repurposed wood will add to the venue's farmhouse charm.

“Everything is very wabi-sabi,” she says. “It’s perfectly imperfect... a marriage of old and new, and it really reflects my taste. And it’s so similar to the look and feel in my home. But that’s what I want… to create this warm, welcoming environment that feels just like I’m inviting people over to my house.” 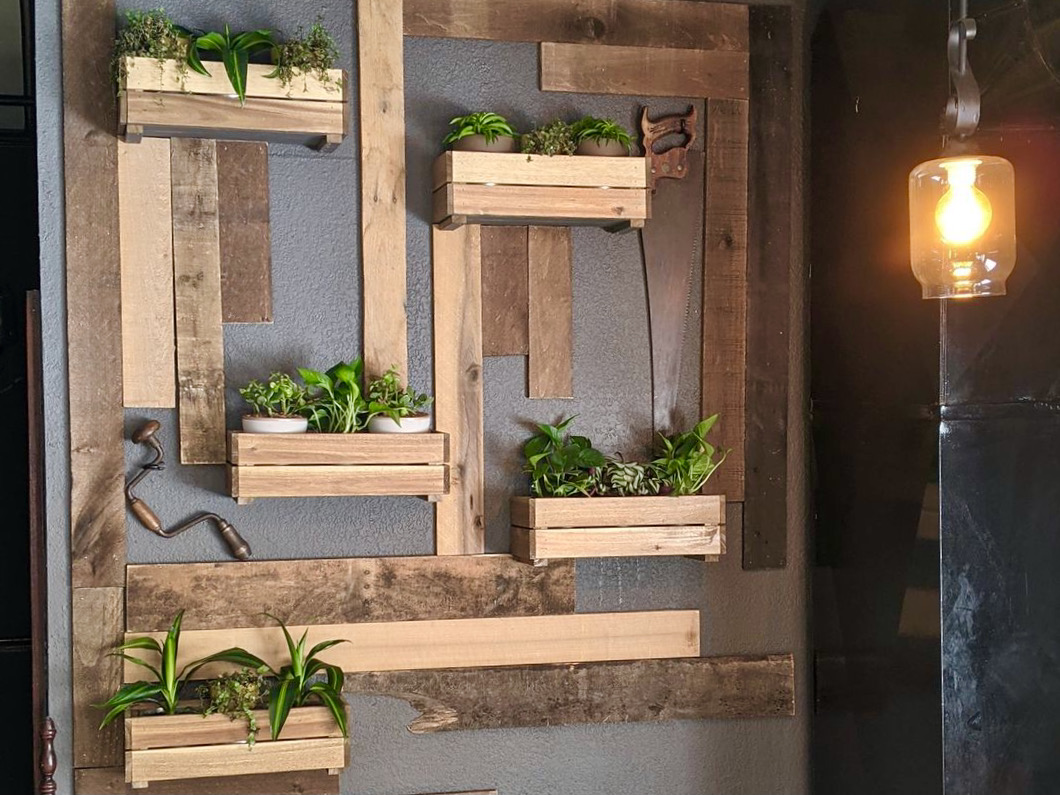 A peek at the rustic decor (photo c/o Sherrilynn Law)

Law says the venue will be largely food focused, but it will feature a full bar. The emphasis will be on house cocktails; but there will be something for everyone.

“It’s the sort of spot where you can stop by after work for a shot and a beer,” she says. “But you can also walk in and enjoy a really great glass of wine.”

On the food side, she says she’s always loved cooking for people and is planning a menu of comfort food items and inventive dishes she might make for guests – including her vegan, vegetarian and gluten-free friends – in her home. In fact, while she won’t have the liberty to run a completely gluten-free kitchen, she is hoping to install a dedicated gluten-free fryer to better accommodate those avoiding gluten.

The menu will also showcase flavor profiles that Law says pay homage to her Vietnamese heritage.

“I’ve really been pursuing an exploration of my family background through food,” she says, noting that her journey began with fermented vegetable dishes and has grown to include ingredients and flavor profiles from not only Vietnam, but Korea and beyond.

She says that, among the inaugural dishes created for the restaurant are shrimp sliders served with a Korean-inspired remoulade and Tiger slaw, a melange of cabbage, daikon, mango and apple.

“The dish is really special to me,” she says, “Not only because it was the first, but also because my son helped me out with it. It will be on the menu for sure.”

Other options will include the Saigon sandwich, a riff on a banh mi that can be made with either house seitan or shaved steak; and a riff on American meatloaf that gently weaves in a number of nuanced Asian flavors.

“I’m planning to serve it with a Gochujang ketchup with Korean spices,” she says. “And I’m working hard to create a really great veggie version of it as well.”

In addition to dinner service, guests at Blackwood Brothers can also look forward to weekend brunch and industry brunch on Mondays.

There will also be staples like a house brunch burger, blueberry and chia overnight oats; kimchi pancakes with scallion sauce; and Manchego cornmeal biscuits with chorizo gravy.

Ultimately, Law says she can’t wait to welcome her first guests at the new restaurant.

“This entire place is a labor of love,” she says. “It’s been in my head for so long, and I’m really excited about being able to finally share it with people”