A chat with headlining Irish Fest chefs: The Blair brothers

There's plenty to love about Irishmen Duncan and Richard Blair, owners of the Blairs Inn in Blarney, Ireland - including the fact that they seem to love it in Milwaukee.

The OnMilwaukee.com Summer Festivals Guide is presented by Pick 'n Save, Where Wisconsin Saves on Groceries. Pick 'n Save is Wisconsin proud, and excited to help promote and feed the great Milwaukee summer that includes festivals and fun nearly every day. Click to savehere!

In its usual fashion, this year’s Irish Fest (Aug. 13-16) will be filled with great music and delicious food.

Headlining in the kitchen are Duncan and Richard Blair, two brothers from Blarney, County Cork, Ireland, who own the historic Blairs Inn, 2014 recipient of the prestigious Georgina Campbell Pub of the Year Award.

Both Blairs carry forward a family tradition of delicious food an impeccable service at the Inn. Their parents, Anne and John, purchased the inn from the longtime owners in 1986, and built its reputation through word of mouth, which spread like wildfire after locals began to taste Anne’s fantastic cooking. After pursuing travel and careers of their own, both Duncan and Richard found themselves drawn back to the family business, taking over operations of the pub in 2005.

Duncan, who trained at the Ballymaloe Cookery School, heads up the kitchen, and Richard manages front of the house operations. Both are self-confessed craft beer nuts who share share their parents' passion for food and customer care. "Georgina Campbell Pub of the Year Award" in 2014.

I met the Blairs on the Irish Fest grounds for a chat on Wednesday, the afternoon after they arrived in Milwaukee.

OnMilwaukee.com: Have you ever been to Milwaukee before?

Duncan Blair: No, this is our first time here. We got in yesterday, got two hours sleep and went straight to La Merenda, met Peter (Sandroni). That was so great. He’s a kindred spirit – passionate about local food.

And today, we went over to the Westown farmer’s market and saw just loads of produce. It’s great to see the same movement going on here.

OMC: I hear that you’re pretty into beer. Have you tried any beers here that you’ve especially liked?

Richard Blair: The Lakefront IPA was good.  But Riverwest Stein, that was a favorite. And we spent time at what is now our favorite Milwaukee pub, Wolski’s.  The people there were great. We had such a good time. We didn’t quite close it last night, but they gave us a bumper sticker. Someday, we hope we can actually close Wolski’s. 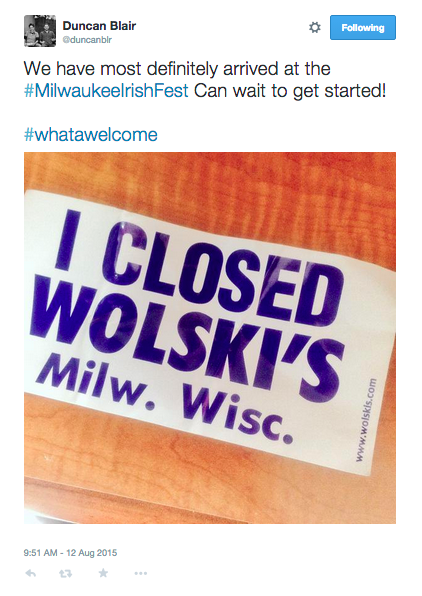 OMC: What are your other plans for the remaining time you're here?

DB: We’re spending a lot of time cooking, getting ready for our demonstrations this weekend. Right now, we’re waiting for a shipment of cheese and Irish produce from Good Food Ireland; they are giving us all the Irish food we are using for the festival.

The demos, really, will give people the flavor of what we’re all about, in Ireland, in Cork, in our region. For people who can cook, we’re here to tell them the story. All good food has a story. And we’ll be sharing that. Like the story of our delicious Irish beef. This will be the first bit of Irish beef to be in Milwaukee, the states really, outside of Boston. And that’s great. We’re really trying to bring people a taste of Ireland.

OMC: Do you have a particular philosophy with your cooking?

DB: We put massive effort into sourcing great product  and then keep it simple, really. Talking to Peter (Sandroni) was really great. He’s part of the Slow Food movement here in Milwaukee; and we’re part of that in Ireland.  It’s great to come over here and hear someone talk about their suppliers like we do back at home.

OMC: You’ve owned the Blair Inn in Blarney for the past 10 years. Have you changed much? Or are you pretty traditional?

DB: No, not really. For us, it’s about moving forward and paying due respect to the past.

RB: We didn’t drastically change anything. But, we brought more to it. Ireland has evolved over the years and the pub scene is changing. Ten years ago, there was no craft beer movement in Ireland, and now it’s growing exponentially.

DB: Our mom was a pioneer in craft food for pubs. In 2003, when they passed the smoking ban in Ireland, they said it would be the end of the pubs, but it wasn’t.

OMC: In the kitchen, do you tend toward more traditional Irish fare, or more of the modern fare?

DB: It’s a mixture. We are what we are, and we’re not trying to be anyone else. We have passion about our food, and people respond to that.

There’s great seasonality to our menus. We do salads with local produce in the summer, and game in the winter – pheasant and venison in a dark chocolate and coffee stew. So, we’re known for that.

RB: In the summer, we have a beer garden. It’s a lovely riverside beer garden. In the morning, you’ll often see a heron carrying a fish. There’s a patio area where we can do barbeques in good summer weather.  We can fit about forty outside. This year it hasn’t been warm enough, really. But, when it’s good, it’s great.

DB: Yeah, we always pray to the heavens that we have a good summer.

OMC: What kinds of recipes will you be sharing at Irish Fest?

RB: We’ll be featuring Dungarven Brewing, our personal favorite craft brewery.  They have an importer with no distribution in the states, so maybe we can hook them up while we’re here.

OMC: In your minds, what are the biggest misconceptions people have about Irish cuisine?

DB: I don’t really know what the misconceptions are. Because we keep our heads down, and really concentrate on doing what we do well.

What I know is that Irish people kind of traditionally have an inferiority complex; but the food producers and chefs really have an immense pride in what we do. We feel our produce is second to none. The recession has really forced people to reevaluate, and that’s come down to local producers doing things really well. You’ve got local vegetable growers and cheeses and beef. We’re so proud of our beef.  There’s a big development – I suppose an explosion – of food in the last few years.

And we do have traditions – like corned beef and cabbage, which is traditional in Cork. It’s a big thing there, and if it’s well done it’s really delicious. But, even the simplest things in Ireland – a potato, the butter – people eat them, and they’re blown away.

The great thing to find in Milwaukee is that there’s a similar feeling here. We have a similar pride. The feeling is that, what we have is an island – and we have to claim it and take care of it, the resources.

The Blairs are scheduled for three cooking demonstrations at the Celtic Kitchen during Irish Fest. For days and times, access the full schedule online at IrishFest.com