Andrea Bowes is not Eastern Orthodox, but she fell in love with a style of art that's usually practiced solely by members of the religion. As a talented artist and deeply spiritual person, she was taught the process by a master and her work is now on display at St. John the Evangelist.

Seventeen years ago, Andrea Bowes received a tarot card reading at a bookshop in Sedona, Arizona. The reader, after looking at Bowes’ cards, fervidly expressed to Bowes that she was an artist and the world was waiting for what she had to paint.

At the time, Bowes was not an artist, although she always considered herself artistic.

"I thought, ‘come on, this sounds big and inflated,’ and then she started yelling at me," says Bowes. "I thought, ‘I just paid you 40 bucks and you're yelling at me and telling me what to do?’"

Apparently painting was in the cards for Bowes, because years later, she fell in love with a 15th century Byzantine technique used to create religious iconography and felt compelled to try her hand at it.

"Some of these paintings are hundreds of years old and have absorbed the smoke from the incense and the prayers and meditations of hundreds of people," says Bowes. "You can sense it in the piece."

Historically, this style of art is confined to the Eastern Orthodox Church and passed down through people, teacher to student. 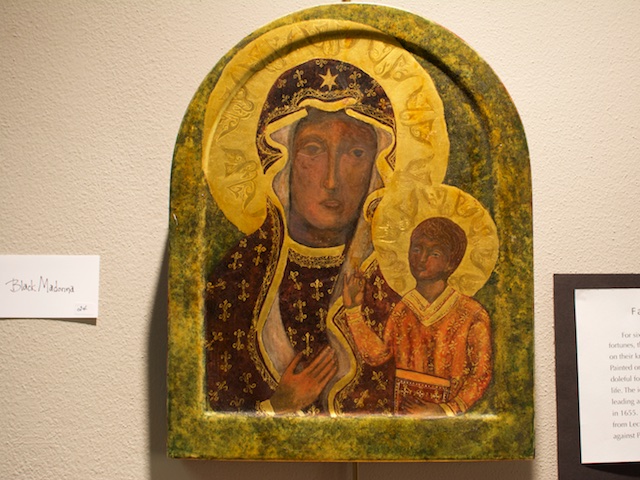 "It’s a practice that they’ve garnered for years and years," says Bowes. "There are hardly any books written on it."

Although Bowes is not Eastern Orthodox, a master of the technique agreed to teach her the tedious process in a Cedarburg church. Bowes says her teacher and other students refer to her jokingly as "the heretic" because she is the only non-Eastern Orthodox person in the group.

"The entire process is a spiritual exercise for me," says Bowes, who uses the term "icon writer" instead of "painter" to describe herself in this role.

Bowes started out painting traditional Eastern Orthodox icons, but gradually incorporated iconography from many other religions, some controversial like a black Madonna, a female whirling dervish and the tarot card, Temperance. At first, her teacher was skeptical about her intention to paint non-traditional icons in a traditional way, but realized Bowes was approaching the art form with deep respect.

"She realized I’m respectful of all religions, including her religion," says Bowes.

Today, all of Bowes’ paintings are a combination of symbols and colors from many different faiths.

"I describe them as ‘amalgamations of sacred images of all faiths,’" she says. "That's really where my heart is: integrating faiths." 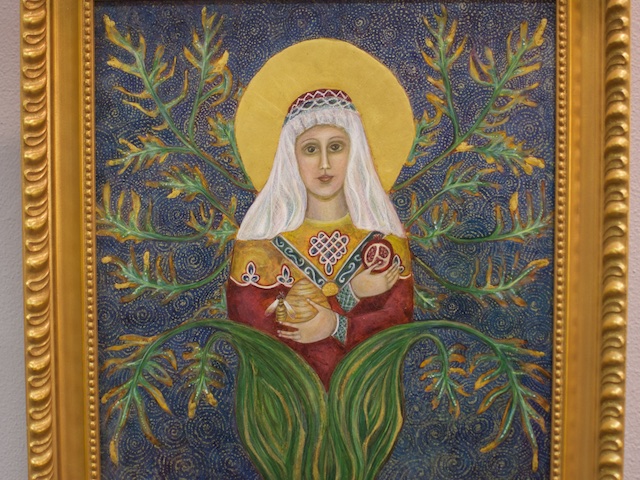 The process is very detailed and fastidious and each painting can take hundreds of hours to create. Traditionally, the icon is painted on poplar board that’s prepared with 10 or more layers of gesso, rabbit-hide glue and white linen. These sealants create a permeable marble-like surface which allows the many layers of pigment / paints to saturate the surface.

"With each layer there is an ever-increasing integration of color and depth that takes on a spiritual presence of its own," says Bowes.

The pigments are made from ground-up semi precious stones and minerals and are created specifically for each piece. Egg yolk and white wine or vinegar are used to preserve the painting. After they are dry, the paintings are "christened" with linseed oil.

"They believe these paintings are the window of the divine," Bowes says.

Bole, which is liquid clay, is used on the rim of the board as a medium for the "guilding of the halo." With a special agate, the clay is ardently sanded and burnished. Once it’s polished to a smooth surface, Bowes breathes on the clay to warm and moisten it so she can adhere gold foil.

"The gold foil is so fine that a breath could float it away," she says.

Last month,"Cultures of Faith," a collection of Bowes’ paintings, opened at The Treasury Room, a gallery inside the Cathedral of St. John the Evangelist, a Roman Catholic church at 812 N. Jackson St. The show runs through Jan. 20.

The extraordinary exhibit features about two dozen icons created by Bowes over the past 11 years. The icons come from many different religions, from Catholicism and Buddhism to Wicca / Paganism.

"It was lovely the cathedral let me put this collection here," says Bowes.

Two years ago, the church hired Bowes to paint a permanent installation of a historic deacon in the sanctuary.

Originally, Bowes gave her paintings away, even though they take more than 100 hours to complete.

"It was a hobby that became a little business," she says. 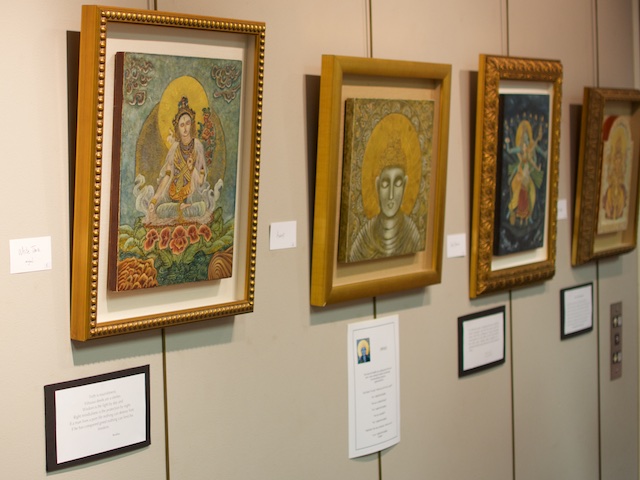 Bowes asked a photographer friend to shoot images of some of her work, and when he came to her office to drop off the prints (Bowes is a therapist by trade), there was a seemingly clairvoyant person in the waiting room who saw them and said, "There is so much energy in the pretense of these. You have to get them out to the public."

"I would have never seen them this way, it was more of a spiritual practice for me, something I loved to do, and it blossomed into all of this," Bowes says. "Archetypal images carry spiritual energy. It doesn’t matter if you’re Christian or Jewish. They speak to everyone universally."