Favre will mingle with fans during Sept. 17 dinner event at Miller Park

A little more than a month after induction into the Pro Football Hall of Fame this summer, Brett Favre will spend an evening celebrating and reminiscing with fans in Milwaukee during a dinner held in his honor at Miller Park.

A little more than a month after he’s inducted into the Pro Football Hall of Fame later this summer, Brett Favre will spend an evening celebrating the achievement and reminiscing about his career with fans in Milwaukee during a dinner held in his honor at Miller Park.

Tickets for the Sept. 17 event, called "Thanks 4 the Memories," will be $250 per person or $2,500 for a table of 10 seats, and proceeds will benefit the former Packers quarterback’s foundation, Favre 4 Hope. The dinner will take place on a temporary floor in the outfield of the Brewers’ home.

Some people have wondered why the high cost of admission and why a baseball stadium, rather than Lambeau Field or another location in Green Bay. Vicki Krotts, the president of Metro Events, which is cosponsoring the evening with Jeff’s Sports, said the price is "the going rate for charities in town" featuring high-profile athletes, referencing the MACC Fund’s "An Evening with Aaron Rodgers."

Krotts said the significance of having the dinner at Miller Park is that it is in the shadows of County Stadium, where the Packers played two to four games per year from 1953 until 1994 and where Favre scored the winning touchdown in the final game there, a nine-yard run to beat the Falcons on Dec. 18, 1994.

She said the event is a nod to the "many, many people who support the Packers and support Brett" that live in Milwaukee.

She added that there are also lots of local sponsors in Milwaukee and Gold Package ticketholders – those fans that used to attend County Stadium Packers games and were offered a different Lambeau package after the team stopped playing at the baseball stadium – who wanted to see Favre.

"It’s only fitting because there’s never been any event here for him," she said. "Nobody celebrated anything for him in Milwaukee (after retirement)." 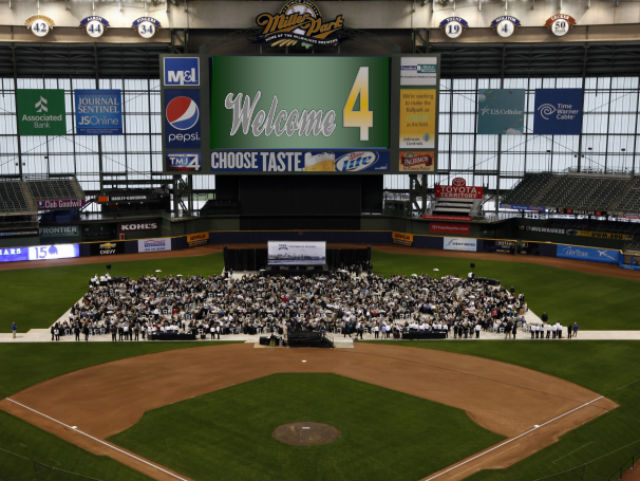 Last July, Favre, after his flag football Legends Game at Camp Randall Stadium in Madison, was inducted into the Green Bay Packers Hall of Fame during a ceremony at Lambeau Field. That seemed to wash out the last sour remnants of his bitter breakup with the Packers in 2008, when his retirement capriciousness caused the team to cut ties with him and commit to Rodgers as its quarterback.

Doors open for the Miller Park event at 5 p.m. on Sept. 17. The night’s itinerary includes drinks and dinner (short ribs, potatoes, vegetables, salad, dessert and rolls), followed by video highlights, interactive storytelling and a Q&A session hosted by Packers radio announcer Wayne Larrivee. Krotts said the format hadn’t yet been finalized, but likely fans would be able to write down and submit their questions for Favre to answer. Attendees will also receive a parting gift.

Wisconsin's nightmare is over: Favre returns to Green Bay