Brewers' Thames & Gamel hit the Valley to brew some IPA

For the third straight year, Miller Brewing has invited Milwaukee Brewers players and broadcasters into the Valley brewery's Flying Hippo innovation room at MillerCoors' Technical College to create their own beers that will be available later in the season for fans to not only taste, but to then vote on.

For the third straight year, Miller Brewing has invited Milwaukee Brewers players and broadcasters into the Valley brewer’s Flying Hippo innovation brewery at MillerCoors' Technical College to create their own beers that will be available later in the season for fans to not only taste, but to then vote on. 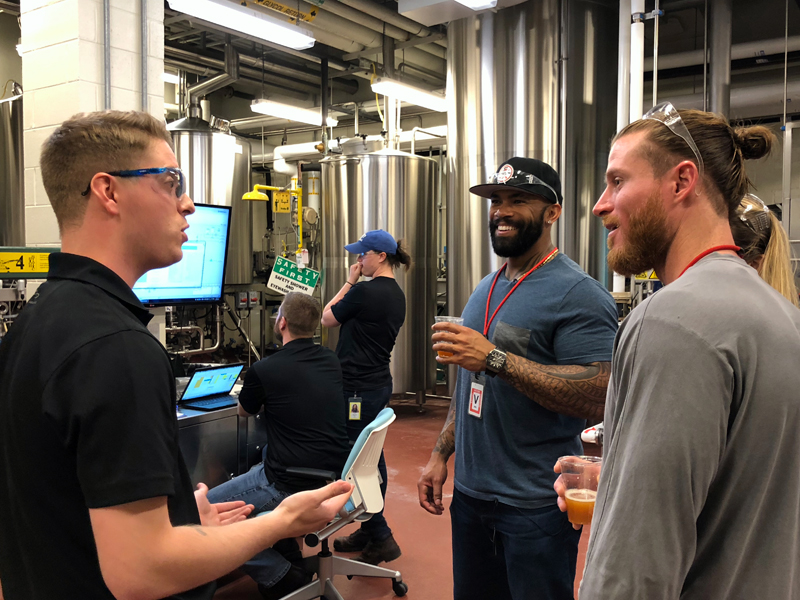 In the first year, Thames, and relief pitchers Corey Knebel and Oliver Drake, collaborated on a single brew. 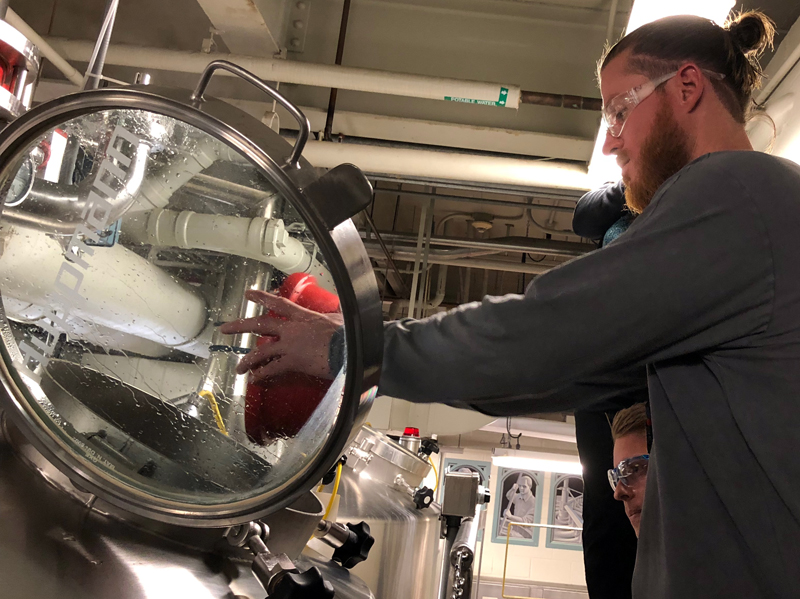 This time around each team will brew a single, 10-barrel – 310-gallon – batch of beer, according to MillerCoors R&D brewer Jake Carpino.

The teams were at Miller’s innovation brewery on Monday, where team Gamel-Thames was working on its beer, which the players declined to describe, reminding everyone in attendance that it was a competition. 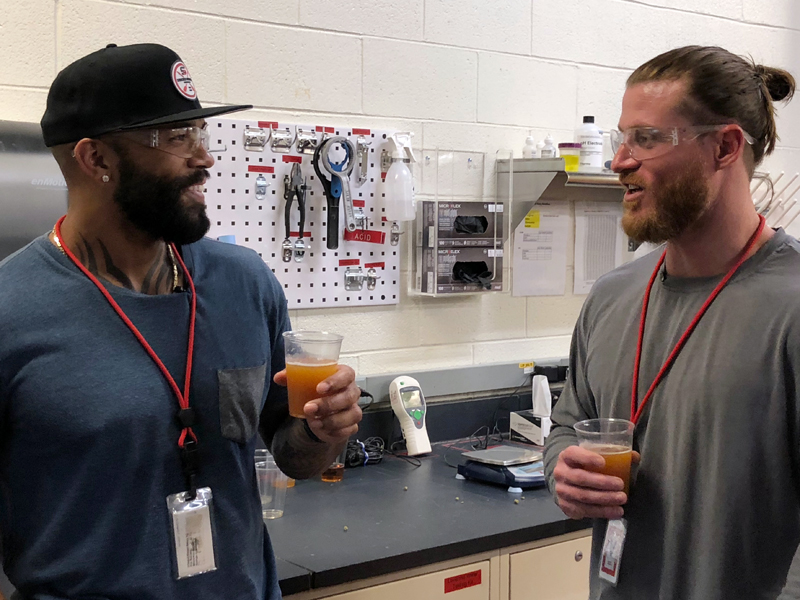 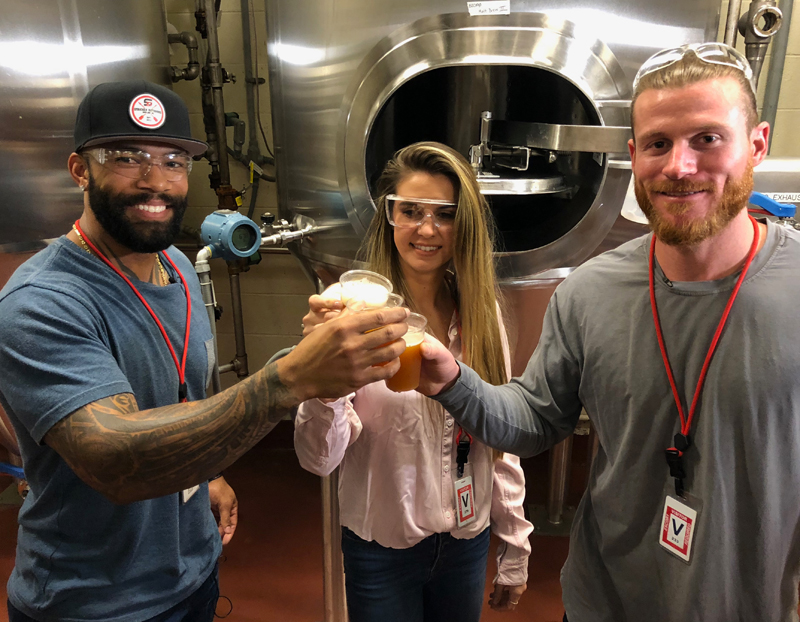 But it seems pretty clear that they’re working on an IPA, as the players were wowed by a hazy IPA they were sampling from brite tanks, and Thames’ previous brew was a hoppy affair. And, Schroeder pretty much said as much.

Plus, while the array of hop pellet samples on a counter in the tasting room might’ve been a red herring, we saw both Gamel and Thames measuring out especially aromatic hops – Thames put the bowl under my nose and encouraged me to take a closer whiff – and then adding them to the brew kettle as wort flowed in from nearby lauter tuns.

Then there was the fact that on the control panel of the computer running the system, it was plainly noted that the concoction is an IPA and one that was being brewed using the same computer procedure as Terrapin’s ultra-hoppy Hopsecutioner IPA, which boasts an lip-puckering 71 IBU and a walk-wobbling 7.3 percent ABV. 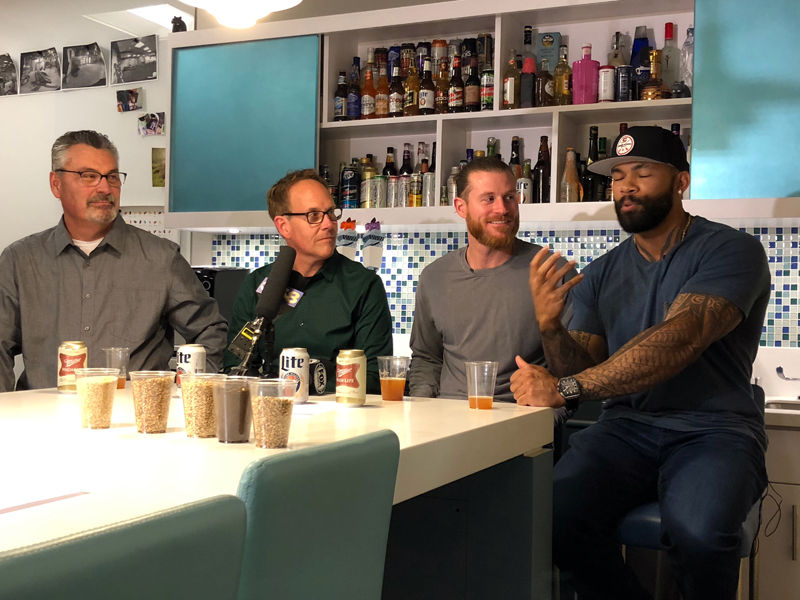 That approach is being used because, according to Carpino, the players are hoping to hit some of the same notes as the popular beer from the MillerCoors craft subsidiary in Athens, Georgia. (A can of Hopsecutioner was also sitting out in the tasting room, near those hops samples – only one variety of which is among the six used in Hopsecutioner.)

"Because they’re aiming for some of the same qualities (as Hopsecutioner), such as body, it’s close enough that we can tinker the settings as we go," said Carpino.

Thames vowed the beer, "will pack a punch."

You’ll have to wait until July to try the brews yourself. In the meantime, here’s a sneak peek at the players’ contribution as it fills the brew kettle ...

Two @brewers players — @bengamel24 and #ericthames — are battling @foxsportswisconsin broadcasters @craigcoshun and Bill Schroeder in a #brewing contest. Fans will vote on the winner in July. Today they were at @millercoors innovation #brewery in #milwaukee and this is the players’ #beer in the brew #kettle. Story soon @onmilwaukee