After a dramatic 163rd regular season game against their I-94 rivals in 2018, the Milwaukee Brewers hosted the Chicago Cubs for their first series of the new season. Here is our breakdown of the Brewers' win over the Chicago Cubs by the numbers.

After a dramatic 163rd regular season game against their I-94 rivals in 2018, the Milwaukee Brewers hosted the Chicago Cubs for their first series of the new season. And while the Cubs and starting pitcher Jose Quintana have gotten the best of the Milwaukee throughout the years, the Brewers’ recent success against the Cubs continued on Friday with a high scoring 13-10 victory.

Here is our breakdown of the Brewers' win over the Chicago Cubs by the numbers:

163: A number that speaks for itself

Friday night was the first time the Brewers and Cubs met since baseball fans were treated to some extra baseball with a tie-breaking 163rd regular season game between the two rivals. As we all know, the Brewers came out ahead to claim the NL Central, where they would go on to make a run in the playoffs while the Cubs lost their Wild Card matchup to Colorado Rockies the following day. The smiles of Brew Crew fans haven’t faded since Game 163, and fans went into Friday night’s matchup hoping for another consecutive win. 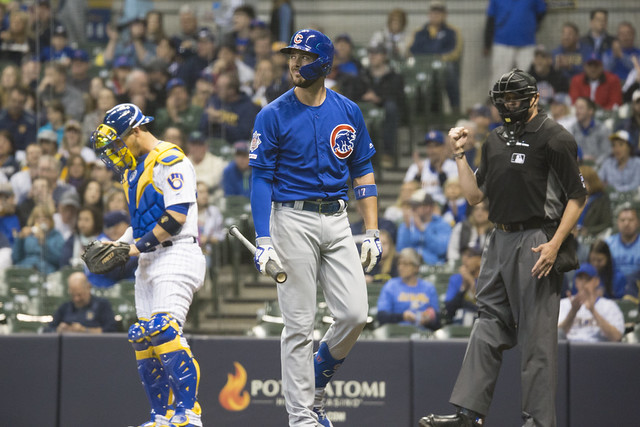 One ingredient for a great rivalry is close proximity, and while the Brewers and Cubs aren’t as close as the Cubs’ cross-town rivals, the Chicago White Sox, Miller Park and Wrigley Field are separated by less than 90 miles (or 474,144 feet, to be more exact). As a result, Miller Park has unfortunately been dubbed "Wrigley North," but our city welcomed opposing fans on Friday to come watch their team lose, and the short distance makes for a great rivalry.

Friday’s game certainly saw more action that Game 163’s 3-1 outcome. Between the clubs, a total of 23 runs were scored on Friday, making for an especially entertaining game. Runs were scored in every inning but the sixth, with no shortage of homers throughout the ballgame. It wouldn’t have been wild to expect a low-scoring showdown between starting pitchers Brandon Woodruff and Jose Quintana, but that was not the case last night. 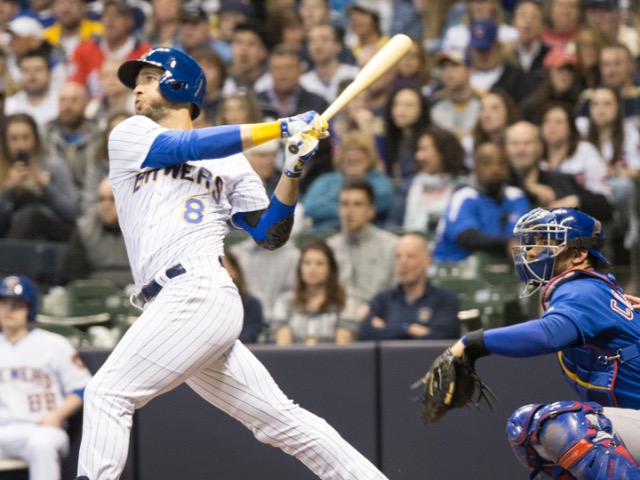 5: Home runs for the good guys

You don’t often get to 13 runs without a few homers in the box score. A total of five different Brewers went yard on Friday – Thames, Grandal, Perez, Arcia and Braun  – with the vast majority of the team’s runs coming from the long ball. The Brewers’ pyrotechnics crew certainly kept busy from start to finish.

With all the action, Friday night’s game was certainly a long one and lasted over three and a half hours – and that was without a bottom of the ninth. With over 300 pitches thrown between the clubs, it’s a good thing that Milwaukee got their first day of rest on the season the previous day. Longtime fan Shirley Ollman kicked off Friday night’s game kicked off by longtime fan by throwing out the first pitch for her 100th birthday – and considering the game’s duration, she might as well stuck around to celebrate her 101st birthday as well. 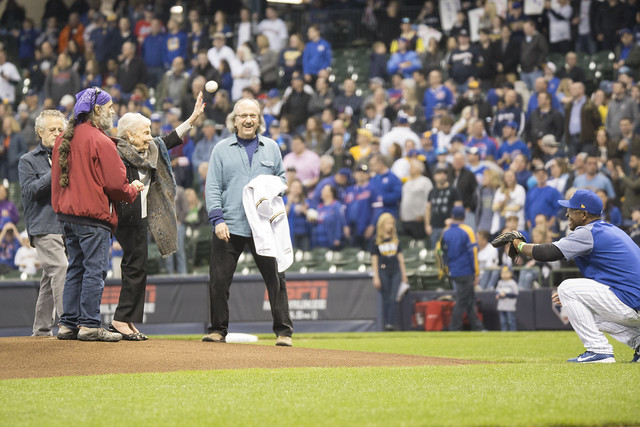 Jose Quintana has been a Brewers killer throughout the years. Last season Quintana was 4-1 against the Crew with an impressive 2.13 ERA, holding Milwaukee to a low .196 batting average. In his 11 career starts against the Brewers, Quintana allowed just 13 runs in 72.1 innings going into Friday’s game. That all changed yesterday as Jose Quintana had a dismal 10.29 ERA and matched his career high for runs allowed (eight) – just five fewer runs than what he had given up against Milwaukee in his entire career.

While our reigning National League MVP Christian Yelich is tied for fourth in the league for RBIs, Ryan Braun isn’t far behind him after leading the team with four RBIs on Friday, thanks in part to a big home run in the second inning. Braun now has nine RBIs for the season and will look to add some more against the Cubs’ pitchers this weekend. 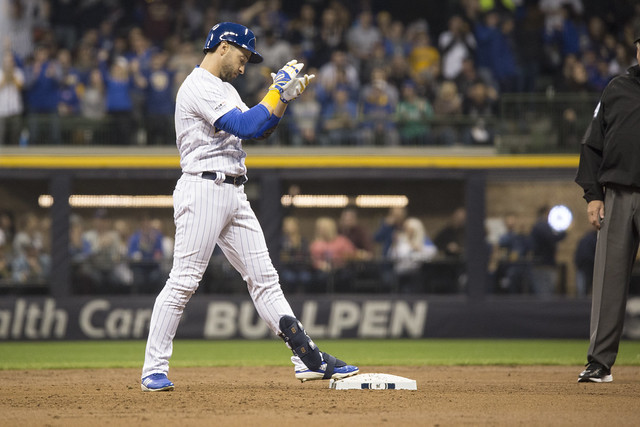 With Friday night’s victory, the Brewers are now on a six-game winning streak after splitting the first two games of the season with St. Louis. That doesn’t just mean that the Crew are one of the hottest teams in the MLB, but it also means (knock on wood) that we are halfway there when it comes to another celebration of free hamburgers from George Webb. Last year George Webb estimated that they gave out 100,000 burgers after the Brewers achieved 12 consecutive wins – and we hope that they’ll serve up another 100k in 2019.

34,926: Fans in attendance for Friday’s matchup

Nearly 35,000 fans wearing blue came through the turnstiles on Friday to watch the Brewers and Cubs faceoff. Unfortunately, as is so often the case, Cubs fans seemed to outnumber Brewers fans last night. And while we don’t have the exact ratio, those numbers will likely get worse as it’s easier to travel to Milwaukee from Illinois during the weekend. The good news is it’s always great to fill the seats – and if the Brewers continue to stop the Cubs like they have since the second half of last season, the Cubs fans will eventually fizzle out. 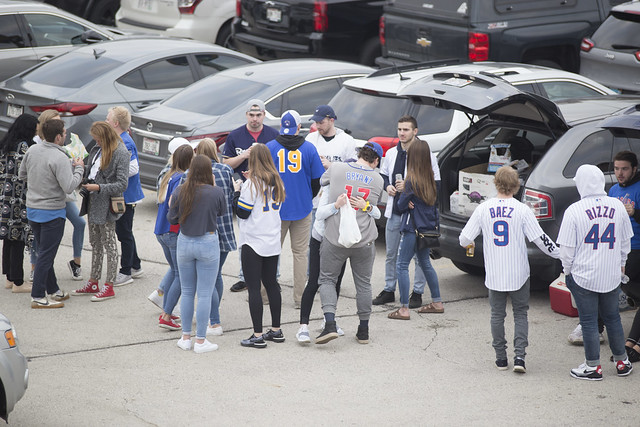 As mentioned before, Christian Yelich currently ranks in the top five when it comes to RBIs. Only eight games into the season, Yelich already has 10 RBIs after adding two on Friday with two hits as well. If Yelich has another MVP caliber season, the Brewers have a great shot at playing baseball in October.

1: Where the Brewers currently sit in the standings

Stealing a little bit of the spotlight from the Bucks (who just secured the NBA’s best record), the Brewers currently own the best record in baseball after Friday’s victory at 7-1. It’s early in the year, but already holding a three-game lead in the NL Central eight games in is certainly no small feat. Being number one in April means little, though, if you’re not number one (or close) come the end of September. 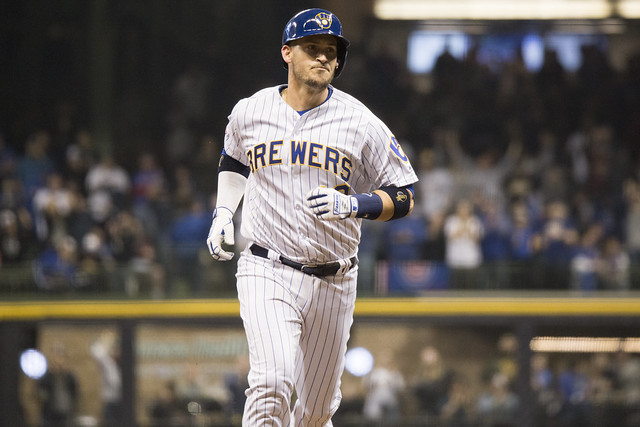 +6: The Brewers’ run differential on the year

While their 7-1 record is great reason to celebrate, the Brewers only have a +6 run differential for the season. Scoring 41 runs and allowing 35, the Brewers got to seven wins by a number of close victories. Although it’s great that the Brewers are able to consistently win close games, the team is also just a few runs away from a losing record. Let’s focus on the positive though!

16: The additional degrees needed for an open roof

Fans are glad that baseball season is back, but we all want warm weather back as well. And with warm weather comes an open roof at Miller Park. 60 degrees is the sweet spot for the stadium to keep it’s roof open, and last night fell short of that number by 16 degrees, as it was 44 degrees in Milwaukee during the first pitch. Don’t expect an open roof anytime this weekend, but we hope that it comes soon. 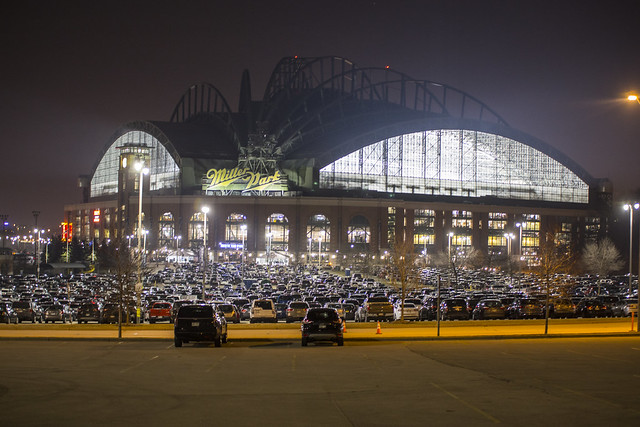 If you haven’t made it out to Miller Park yet, don’t worry because there are 154 games (and 76 home games) left on the year. In that same breath, because there are so many games left, we can’t assume that the Brewers are going to stay on top forever and win seven out of eight throughout the rest of the year – but we do love what we are seeing so far. And we hope it doesn’t get that close, but maybe we will even see another Game 163 in 2019.