Today, as the Brewers prepare to put out the Dodgers' fire in the opening game of the 2018 National League Championship Series at Miller Park, Mayor Tom Barrett unveiled a Brewers-themed fire hydrant in front of City Hall.

Today, as the Brew Crew prepares to extinguish the Dodgers’ fire in the opening game of the 2018 National League Championship Series at Miller Park, Mayor Tom Barrett unveiled a Brewers-themed fire hydrant in front of City Hall.

The hydrant, on the southeast corner of Kilbourn Avenue and Water Street, was designed by Chad Schuster of the City of Milwaukee Water Works (though it's gonna be L.A. turning on the water works soon, amirite?). 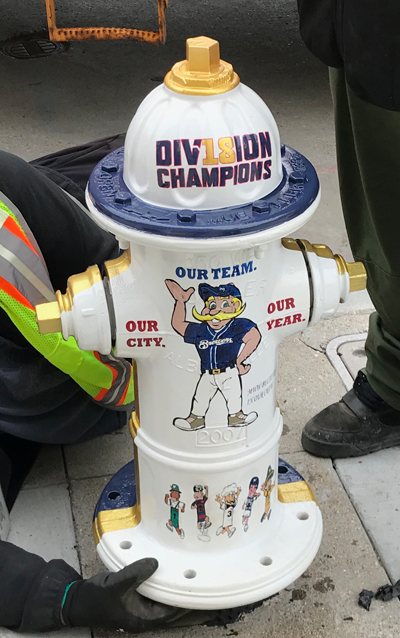 The department – which is responsible for maintaining the city’s nearly 20,000 hydrants – installed the hydrant Friday morning.

Schuster also designed the Bucks-themed hydrants near the Fiserv Forum.

The street-facing side of the hydrant, painted in Brewers blue, gold and white, has the team name at the top and the M-and-barley logo at the bottom. In between, the nozzle cap is painted to resemble an official MLB baseball.

On the sidewalk side, pedestrians get a look at Bernie Brewer and the Racing Sausages and the words, "Our Team. Our City. Our Year." The bonnet bears the phrase, "DIV18ION CHAMPIONS."

Sorry, Dodgers, you’re going to be all wet at the end of this series.