Let's take one final look back at the Brewers' final game of the season, enjoy the good stuff, debate the bad stuff - or, really, just cry about it - and look to brighter days ahead.

For 24 outs, the Brewers had the lead against the Washington Nationals and had Milwaukee fans' eyes on a rematch with the Los Angeles Dodgers. Unfortunately, the result after 27 outs is the only one that matters, as Milwaukee spoiled a late 3-1 lead in the bottom of the eighth and lost their one-game Wild Card playoff match, 4-3, sending Washington off to the West Coast and the Brewers back home to think about what might've been.

It, to use some very analytical sports vocabulary, sucked.

But it wasn't all bad, so let's take one final look back at the Brewers' final game of the season, enjoy the good stuff, debate the bad stuff and look to brighter days ahead.

Foul ball or HBP? I'm not taking a position, but feel free to personally attack people who disagree with you in the comments. #Brewers v #Nationals pic.twitter.com/2x0g0V3nlW — Umpire Auditor (@UmpireAuditor) October 2, 2019

OK, let's start with the most painful image of the night – very literally, in the case of Nationals pitch hitter Michael Taylor.

Like a hyperlocal version of The Dress or Yanni versus Laurel, Brewers fans will likely comb this image for decades to come, trying to decide if it truly was a hit-by-pitch – as called by the umpire and upheld by the replay process – or if it was a foul ball that nicked off the knob of the bat before ricocheting off Taylor.

Honestly, and I'll probably have to revoke my Wisconsin license after this, the call was correct. It's wildly close; from this angle, the ball seems to hit right at the intersection of the hand and the bat, so the call could go either way, but this angle also makes it easier to see the impact with the bat as opposed to the impact with the hand. (You can't see the part of the hand receiving the impact clearly because, duh, the ball's in the way.) Personally, it still appears like the hand reacts first to a hit then the bat, but we're judging the tiniest of milliseconds here; it's the definition of a bang-bang play. But no matter, there's not enough anywhere in these images to reverse the call; it's as close of a call as you will ever find in this scenario, and once it was called a hit-by-pitch, that's how it was going to stay considering the inconclusive evidence otherwise.

Plus, for fans crying that it's a cheap call, it frankly feels cheaper to ask for essentially a do-over – not even an out, since it would've been just a foul ball – with a touchy-at-best call when the batter didn't even swing at the pitch because he was actively moving out of its way. When you saw this moment at regular speed, did you doubt for a second that Taylor deserved first base?

Also: This call, no matter what way you want to rule it, didn't force relief pitcher Josh Hader to have awful control in each at bat, constantly falling behind batters and digging out of holes before eventually giving up the game-winning hit. And it didn't cause Grisham to misplay that very hit, giving the winning run an easy path home. And it didn't cause Ryan Zimmerman to hit the lamest, luckiest, bloopiest, duck farting-est broken-bat single later in the inning. And it didn't cause the Brewers to leave runners in scoring position throughout the game when they could've further cemented their lead.

In the end, it wasn't this call that killed the Brewers' season. The Crew died how they lived in 2019: with an inability to drive in runs via anything other than the home run and relief pitching that never quite cohered up to its reputation.

Funny, I was making the same face after the game.

Jokes aside, can we give Lorenzo Cain all of the awards for this past season? The guy ended the year held together by medical tape and happy wishes, and was still diving around the field, saving runs and putting in meaningful innings for the Brewers. If not all of the awards, can we at least give him the Gold Glove that he should've won about five times by now?

Admit it: It was hard to get truly pumped for this playoff run knowing that our best player was sidelined. I mean, of course we were excited and cheering on the Crew ... but there was always this feeling that the clock would strike midnight sooner rather than later on their Cinderella story with Christian Yelich stuck in the dugout with his fractured knee cap. With him, there would've been a greater sense of possibilities, of a team at full strength – or at least close to it – with a real ability to make a run at the World Series. Without him, just making the playoffs felt like the team's big win. (Hey, considering we've only made it five times before, we'll take it.)

Anyways, here's to seeing Yelich with two beautiful, unharmed and fully armored  kneecaps back on the diamond next year.

Hey, remember that time we took the lead on the Nationals before starting pitcher, team ace and probable future Hall of Famer Max Scherzer recorded a single out? What a time. We were so young then.

5. And remember this great moment!? 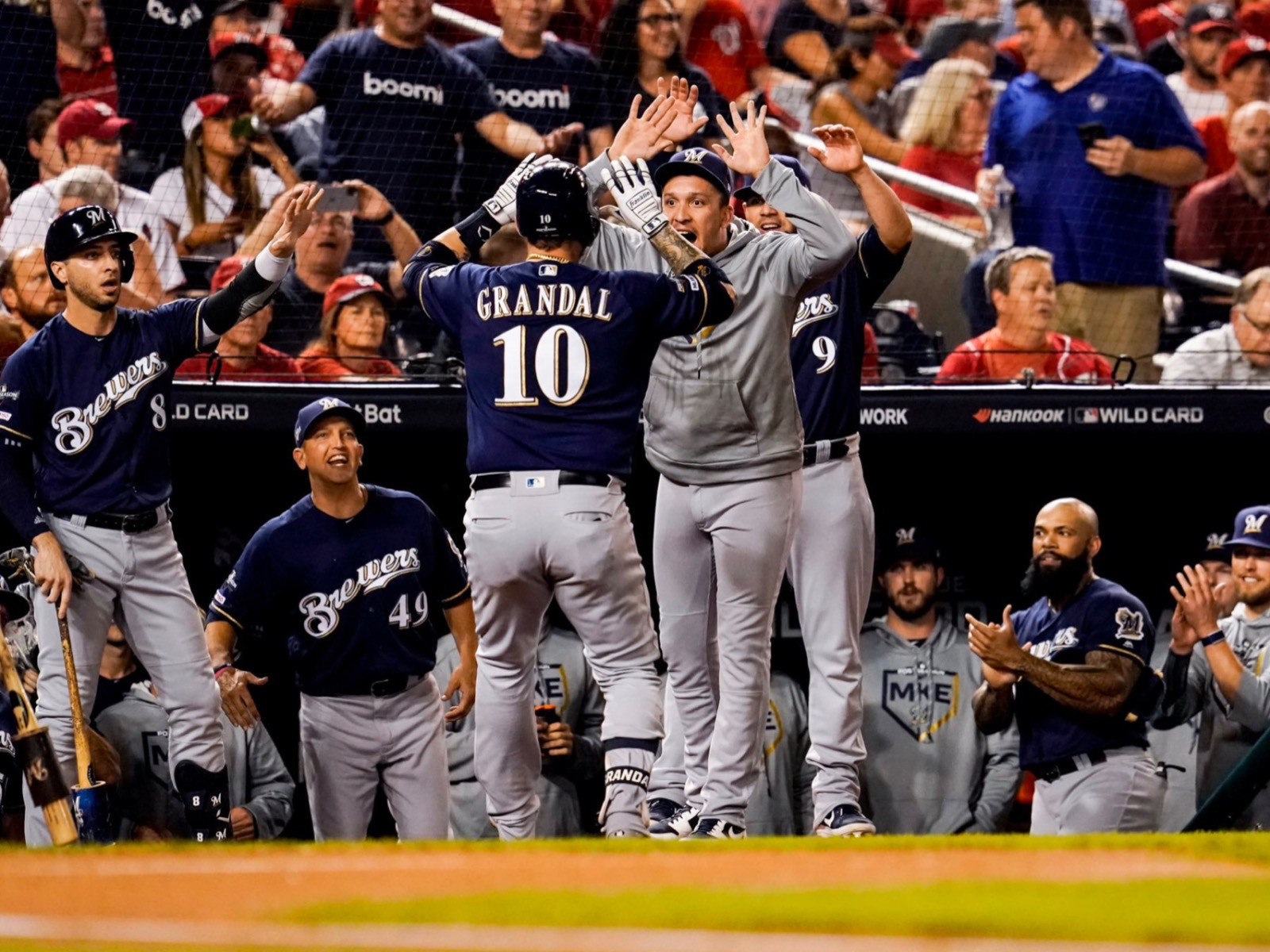 Smiles! LOOK AT ALL THE SMILES! Do you remember what smiling felt like? I vaguely remember the sensation feeling similar to happiness, rainbows and getting a Popeye's chicken sandwich. 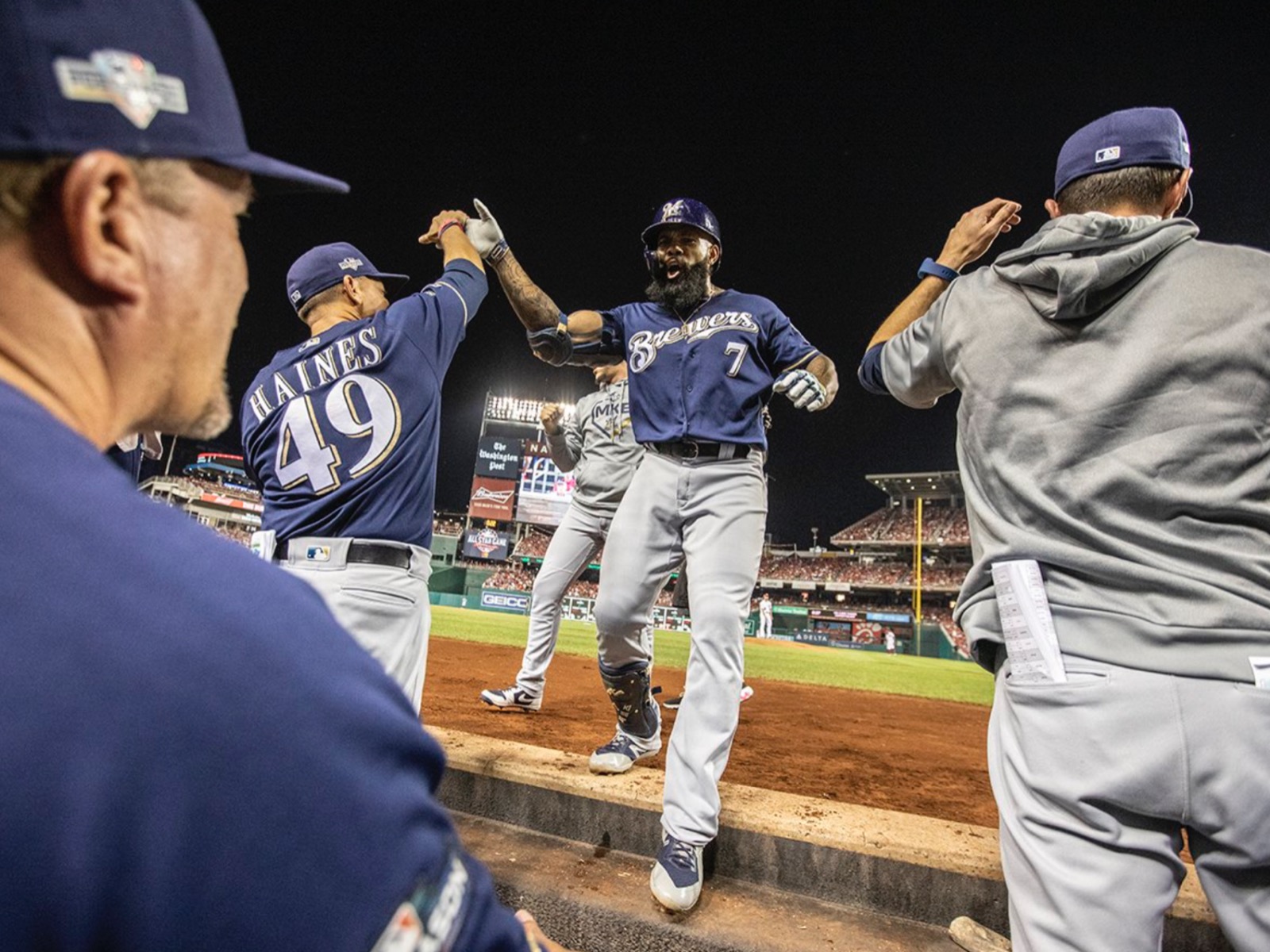 Surely nothing can bring us down from this high! NOTHING! Ha ha! (*stares off into the middle distance as a single tear falls down my cheek*)

One of the most disappointing things about the Brewers' loss Tuesday night is the beautiful bounty of tremendous sad Nats fan images from the broadcast that will now be lost to time because Washington ended up winning. For most of the game, Nationals Park seemed exclusively filled by the saddest people in our nation's capital, just dozens upon dozens of people starring out onto the field with the same forlorn and broken face I made watching "Sophie's Choice" or "Schindler's List" or "Grown Ups 2." We should've had memes upon memes of these tragic folks. Instead, they will go forgotten. That was the true loss Tuesday night.

You have to give it to Milwaukee sports teams: When we lose, we lose HARD. Our losses leave scars and damage psyches. So, uh, we've got that going for us.

But actually, we've got a lot going for us. Even leaving out that the Bucks are a favorite to make the NBA Finals and the Packers are 3-1, the Brewers next year will bring back one of the best players in baseball – complete with two functioning kneecaps – next season, one of the best young bats in baseball with Keston Hiura and a starting pitching staff that began to get healthy and find itself near the end of the season. And that's even without seeing what David Stearns decides to do this offseason – which, as we've seen with Cain, Yelich and Grandal, tends to be significant. The Brewers' future is still beamingly bright.

After the grey clouds from this loss blow over, however, most fans will look back at this season fondly. The team fought its way into the playoffs after struggling all season long – then did so without its best player – and put up one heck of a playoff performance for seven and a half innings. They gave the city hope and yet another chance at glory – this after a long desert of ineptitude. I spent the first 17 years of my life without seeing a postseason trip from the Brewers.

I saw more 100-loss seasons than playoff games. I remember getting excited and giddy merely seeing Milwaukee make the bottom of ESPN's playoff chase graphics – nine games back with two weeks to go, but hey, it was meaningful baseball and national recognition. I'm not going to take back-to-back years of relevant, playoff-quality baseball – something we haven't seen in this city since 1981-82 – for granted, especially when it feels closer to the start of a great Brewers run than the end.

And in the end, we did better than the Cubs.