Currently on a three-game skid, the Brewers haven't been pretty to watch on the diamond - but at least they looked good off the field (unless you're a fashion-savvy person, which, in that case, you may want to continue averting your eyes).

Currently on a three-game skid, the Brewers haven't been pretty to watch on the diamond – but at least they looked good off the field (unless you're a fashion-savvy   person, which, in that case, you may want to continue averting your eyes).

Heading to Pittsburgh Sunday night for its three-game series against the Pirates, the Brewers took off in style. While last year the Brew Crew paid tribute to Prince with "Purple Rain"-inspired outfits, this year's dress-up day took on a more local inspiration: beloved Hall of Fame broadcaster and "Major League" scene-stealer Bob Uecker – complete with deliciously dated patterned suit jackets and white T-shirts emblazoned with Ueck's infamous poolside swimsuit pose from the 2008 Sports Illustrated about the up-and-coming Brewers. (If these aren't available in the Miller Park pro shop soon, I say we riot.)

For bonus hilarity, be sure to watch this little video interview with some Brewers players about the fun "Uecker Trip" – including first baseman and now-beardless folk hero Eric Thames seemingly in laughing disbelief that the lounging Uecker pose from the T-shirts is a real thing from a real photo.

But on the pressing question of the hour: Who wore it best?

All of the glorious plaid monstrosities look great, but amongst the players themselves, Christian Yelich in the bright pink on the stairs is a real standout. However, he's outdone in the blinding pink department by the Brewer on the very far left (at close glance, we think that's bullpen coach Lee Tunnell), whose pink blazer could be seen even by Brew Crew fans all the way in New York City.

As far as creativity goes, we have to give points to the Brewer in the front row, third from the right (again, upon a closer look, we're thinking that's pitching coach Derek Johnson) wearing a blazer bedazzled in ... palm fronds? Sardines? Dragonflies? I don't know; I just know it's gloriously hideous.

However, there is a clear and obvious winner. 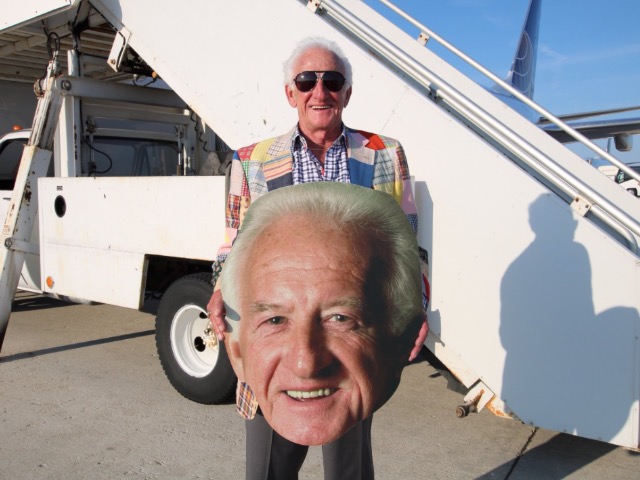 Sometimes you just can't top the original – especially when he comes dressed in a patchwork quilt blazer.