Brewers donate over 20,000 bat and ball sets, plus books, to MPS students

The Milwaukee Brewers announced the donation of over 20,000 plastic bat and ball sets to every student, grades K-5 through the 2nd grade, in the Milwaukee Public Schools system.

The Milwaukee Brewers announced the donation of over 20,000 plastic bat and ball sets to every student, grades K-5 through the 2nd grade, in the Milwaukee Public Schools system.

Each child will receive a brand new "Play Ball" bat and ball set, delivered to each Milwaukee Public Elementary School, courtesy of the Brewers and Chevrolet. In addition, the team announced that 125 schools all over the city will receive a set of baseball-related books. The effort is part of "Play Ball Weekend," a Major League Baseball initiative, which is taking place today through Sunday.

Major League Baseball and USA Baseball launched "Play Ball" as the sport’s largest effort to encourage widespread participation in both formal and informal baseball activities.  The goal of the program is to give kids the opportunity to enjoy the game in a fun environment by highlighting the many ways baseball can be played and introduce kids to the sport who otherwise may not have the chance to experience it. Additionally, the program offers a healthy and active lifestyle option where many of those opportunities are offered less frequently. 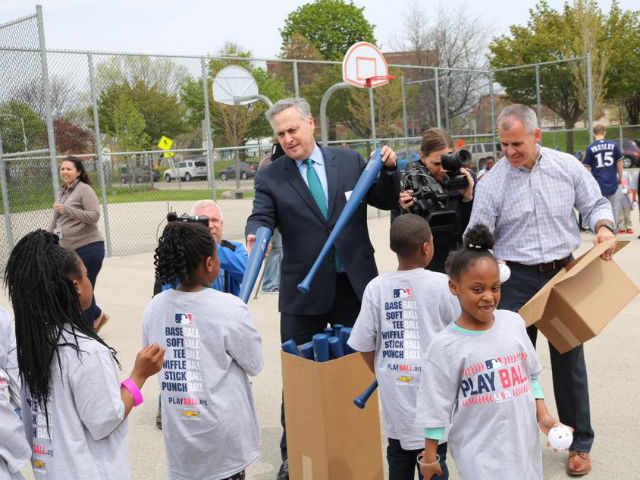 "The goal of this program is to get kids engaged with the game by giving them the tools to play and the resources to learn about the sport," said Schlesinger. "It doesn’t take nine kids to play the game, and it doesn’t require expensive or elaborate equipment. Major League Baseball and the Milwaukee Brewers are committed to connecting with area children through the ‘Play Ball’ program, and we look forward to what we know will be a fun and successful long-term initiative."

Following the press conference, the players engaged with the children and put on a mini-clinic. The players demonstrated basic skills and taught useful lessons about the game.

In addition to today’s press conference, the team will continue to celebrate "Play Ball Weekend" with an on-field ceremony prior to tomorrow’s contest against the San Diego Padres. Nine players from the local Milwaukee RBI program will join Brewers players as they go to their respective positions on the field. The players will then present the kids with one of their very own Brewers caps.

For more information about Play Ball Weekend, the RBI Program or the Brewers involvement in the community, please visit Brewers.com.