Toodle-Luuuuuuuc: Why the Brewers should trade Jonathan Lucroy now

General manager David Stearns knows, and recent history shows, a complete rebuild requires a total teardown. Therefore, the Brewers need to trade Jonathan Lucroy, one of their best and most beloved players.

Assuming we’ve learned anything about successful, modern roster construction from Major League Baseball’s model organizations over the past few years, it is this: If you’re going to suck, you can’t half-ass it.

Fresh-faced Brewers general manager David Stearns knows this. He has indicated the former is his plan, so fans should expect the latter to be the blueprint. Recent history shows it’s the right way to do it, but what does that mean for Milwaukee?

Perhaps not first but certainly foremost, it means trading catcher Jonathan Lucroy, one of the team’s best and most beloved players.

Let’s quickly examine the moves made by the Brewers’ peers the last several seasons.

Stearns, who took over as personnel decision-maker in October and is currently in Nashville, Tenn., for MLB’s annual Winter Meetings, came to the Brewers from the Astros, where he was the assistant general manager. The experience and lessons learned in Houston, where he worked with and under GM Jeff Luhnow, likely informed Stearns’ philosophy on franchise-building.

Stearns joined the Astros in 2012, when they were by far the worst team in baseball. However, that annual awfulness, as we found out this season, was carefully crafted and purposeful. From Luhnow’s hiring in December of 2011 through the end of the 2013 season, the span of Houston’s nadir, the Astros jettisoned every player over the age of 29 and all contracts larger than $3 million. They made 25 trades and acquired 41 players, nearly all of them minor-leaguers.

In 2015, with the fertilely restocked farm system having yielded high-impact big-leaguers, plus a couple deadline trades for veterans – including the Brewers’ Carlos Gomez and Mike Fiers – Houston made the postseason for the first time since 2005. Teardown, rebuild, success.

But the Astros aren’t the only team the Brewers can look to as an exemplar for bottoming out to get back on top. The division-rival Cubs, under Theo Epstein, have also subscribed to that school of thought. In 2012 and 2013, Chicago was one of the worst teams in the majors, but it made a half-dozen deals to rid itself of pricey veterans and rebuild with young talent, both homegrown and acquired. In 2012, the Cubs traded for Anthony Rizzo; the next season, they famously bought low on Jake Arrieta, sending two veterans to the Orioles for the pitcher who would win the 2015 Cy Young Award.

And last season, led by Arrieta and Rizzo, the Lovable Losers made the playoffs and appeared in the National League Championship Series for the first time since 2003. Teardown, rebuild, success.

The Pirates, another NL Central squad, also suffered through many woeful years, casting off veterans and accumulating prospects, before emerging as a contender in 2013.

And, of course, there are the Kansas City Royals, who were terrible for a long time and traded 2009 Cy Young-winner Zack Greinke to the Brewers before the 2011 season for four young players. Two of those, center fielder Lorenzo Cain and shortstop Alcides Escobar, became All-Stars who helped the Royals to two straight World Series, including winning the 2015 championship. The ultimate teardown, rebuild, success.

So, what does all that have to do with Lucroy? It means he must be traded, the most drastic and dramatically beneficial move Milwaukee can make to push the start button on its comprehensive rebuild. 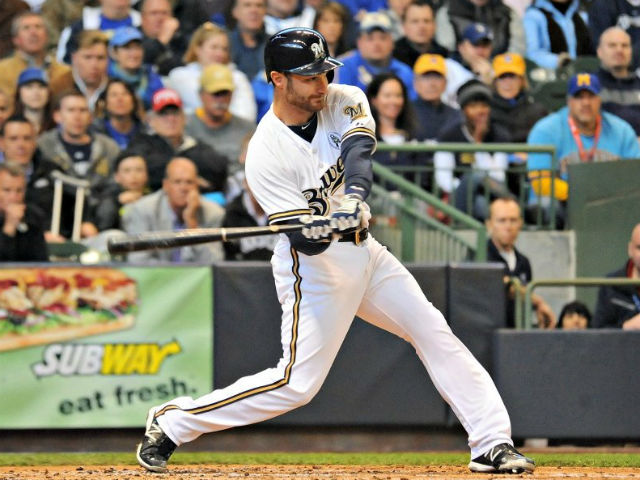 Still, Lucroy, 29, is considered a good hitter at a premium position who works very well with pitchers and plays above-average defense (fifth-best catcher’s earned run average in 2014). He was fourth in NL MVP voting two seasons ago. Overall, he’s among baseball’s best catchers.

He’s also on one of the Brewers’ most club-friendly contracts, under control for two more years for a total of $9.5 million. In today’s MLB, as the most successful teams are the smartest and most economical, the valuable Lucroy is extremely attractive, for his price and production.

But also for his character. Active in the community and a rock-solid locker-room guy, Lucroy is respected by teammates and adored by fans. And that’s the main argument against trading him. Even a young, rebuilding team – or, perhaps, especially a young, rebuilding team – needs quality veterans to set a good example and show other players how to win, whatever that nebulous concept means.

The team’s 2015 nominee for MLB’s Roberto Clemente award for sportsmanship, community involvement and positive contributions on and off the field, Lucroy frequently participates in Brewers’ charity initiatives. The sixth-year veteran is a go-to quote for reporters, can be heard often on the radio and is frequently included in the club’s marketing efforts.

And yet, all that goodwill means nothing for a team that’s going nowhere. The Brewers need to and almost certainly will lose around 100 games for the next two or three seasons, trading away older players, garnering high draft picks, developing youthful talent and preparing the next generation to contribute in the big leagues.

Reportedly, the Brewers turned down Lucroy's proposal for a contract extension, a revealing rebuff by a team that knows it's getting a great bargain.

Right now, Lucroy, despite his down season, has the most trade value of any Brewer. He could net at least two promising prospects in return, and possibly more.

At the Winter Meetings on Monday, Stearns said it was "probably" more likely than not Milwaukee would keep Lucroy, though he didn’t rule out a deal.

"We are still open to discussing any number of players on our roster, but as I’ve said from the opening press conference, Jonathan Lucroy is a really good player," Stearns said. "He provides a tremendous amount of value to the organization. He’s a reason why we can be better next year.

That’s certainly true. And, considering how instructive the Brewers' peers have been in rebuilding, the way to get more Jonathan Lucroys might be to trade the one you have.