During Bar Month, I decided to journey around the Milwaukee area to the craft breweries that give Brew City its rightful name. This week's stop: Enlightened Brewing Company in Bay View.

During Bar Month, I decided to journey around the Milwaukee area to the craft breweries that give Brew City its rightful name. Join me each week in March as I explore the friendly confines that create your favorite brews!

It was a crisp, golden afternoon as I cruised south on 1st Street through Walker's Point. "Bitter Boogie" by King Gizzard & The Lizard Wizard was crackling through my speakers. In the distance, I saw a red, looming building.

Before me stood the historic Lincoln Warehouse equipped with dusty windows and plywood patchwork. However, as I lowered my gaze, I saw a warm glow from two glass garage doors. Enlightened Brewing Company, along with its neighbor Twisted Path Distillery, have filled in the hollow Bay View factory's floors with an array of brewing equipment and wood surfaces, bringing life to the open rooms. 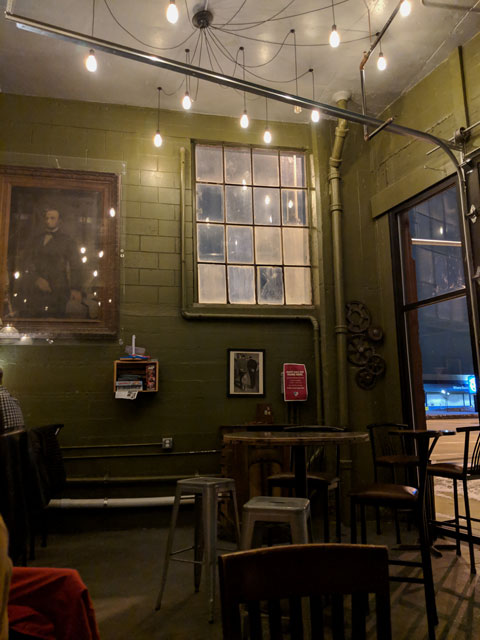 Enlightened Brewery was started by a group of friends, known as The Enlightened Imbibers. Their philosophy? Create a space for friends to gather and share ideas – especially those not recommended for the dinner table – all while savoring craft beer.

Enlightened is scheduled for a big move to the former Louis Allis Motors plant at 427 E. Stewart St. in Bay View in the coming months. But for now, folks can still enjoy the dog-friendly taproom at 2018 S. 1st St. which features decor for a variety of beer drinkers including drooping bulbs hanging from the ceiling and a sturdy portrait of Abraham Lincoln. And for something to help stir conversation, there are mounted wooden baskets that hold board games, cards and magazines.

I felt surprisingly nice and toasty in the lofty taproom as I stared outside at the snow – but I can't wait for the temperature to rise and for the venue to open up the garage doors.

In the meantime, patrons to Enlightened are also able to step next door and catch a live show on Twisted Path's stage. For details on upcoming shows, visit the locale's Facebook page. Cheers!