Milwaukee's most influential punk bands, according to the experts

Four folks with roots in the local music scene banded together to create "Brick Through The Window: An Oral History of Punk Rock, New Wave and Noise in Milwaukee, 1964-1984," an exhaustive tracing of the scene in Milwaukee from its earliest gasps for air.

A quartet of folks with deep roots in the local rock and roll scene banded together to create, "Brick Through The Window: An Oral History of Punk Rock, New Wave and Noise in Milwaukee, 1964-1984," a self-published tome that is exhaustive and engaging as it traces the alternative rock scene in Milwaukee from its earliest gasps for air.

As the quartet woodsheds for its live debut, Friday, Feb. 17 at 9 p.m. at Boswell Book Company, 2559 N. Downer Ave., we asked them to share their thoughts on the most influential bands during the 20 years covered in "Brick Through The Window," which is available for sale at Boswell. 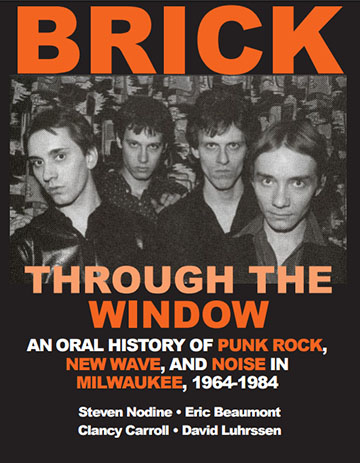 Here’s what they had to say:

"As far as I can tell, Death was the most polarizing band in Milwaukee musical history. At their gigs, their fans threw bottles and groped each other on the dance floor, and their detractors threw all kinds of sh*t and turned off the power supply. Death threw sh*t back, turned their amps up to 11, and walked offstage. Their saxophonist, Dr. Sax, née James Siegfried, moved to New York and took their confrontational approach even further – his microphone cord became a weapon when he started the Contortions.

"A major inspiration to Wild Kingdom and The Blowtorch, the Blackholes delivered a powerful message of unity, justice and peace, sometimes explicitly through Mark Shurilla’s politically charged lyrics about Central American mercenaries – see "Captain Payday," B-side of "Warren Spahn" – sometimes through what we would call transgressive satire of Nazis emigrating to the States – see "Blitzkrieg Over Kenosha." And talk about melody – we’re all still trying to catch up with Shurilla in that respect.

"Who can name more than one all-woman Milwaukee band – besides power-packed ‘60s punk combo Girls Take Over – before Young Stuff? Who can think of a more endearing anti-sexual-exploitation song than "Sex Doll"? In the late 1970s, Suzette, Connie and Vicki picked up guitars and drumsticks and made one of the most joyous, anarchic rackets this town’s ever heard."

"What I loved about the Lubricants was their full-on, take-no-prisoners punk rock attitude; they were so obnoxious. Us versus them. They really set the tone for things at Zak's early on, and they had a ton of great songs, as well as a sense of humor.

"Of any Milwaukee band ever, the Shivvers were probably the biggest ‘coulda, shoulda’ story. They had the look, the chops of veteran players and the top-notch songs and vocals of Jill Kossoris. Amazing stuff that, unfortunately, encapsulates the story of how hard it was to break out back in the day, if you weren’t on one coast or another.

"Die Kreuzen managed to harness the fury of hardcore early on, developing into a unit that balanced brawn with brains, becoming highly influential on the late ‘80s-early ‘90s alt-rock movement worldwide.

"The Violent Femmes’ story is one of individuality, sticking to your guns, working hard and having just a taste of good luck. They showed that all bets were off at the time as far as what could be defined as ‘punk.’ Oh, yeah, and more great songs!"

"The Haskels were not the first Milwaukee punk rock band in the late '70s wave – that distinction probably belongs to the Lubricants. But they were the band that found the widest audience at the time; they had the most diverse original songs, thanks to Presley Haskel and Richard LaValliere, and – because of Presley's politicking and PR acumen – they were the band that did more than anyone to lay the groundwork for a flourishing scene."

"Tense Experts were dark, foreboding and influential, and grave digger dance – the best show in town. The Oil Tasters were the best band ever – original and entertaining. Ama Dots were the most innovative group from Milwaukee to tour the U.S., and Die Kreuzen were slanted punk metal and very very fun to watch."