Like me, it seems that quite a few other folks are curious about and fascinated by old school buildings. The response to my blogs about the Henry Koch-designed Garfield Avenue School and Kagel Elementary were well-received and got me a number of e-mails and in-person comments. Those led to an afternoon of exploration.

Like me, it seems that quite a few other folks are curious about and fascinated by old school buildings. The response to my blogs about the Henry Koch-designed Garfield Avenue School and Kagel Elementary were well-received and got me a number of e-mails and in-person comments.

One teacher, for example, told me that Longfellow School and Trowbridge (or Dover, I can't remember now) were the oldest extant public school buildings. I'm sorry to tell this teacher that her school and the other she mentioned are not holders of that title.

While I don't have definitive information, even a little digging has shown that Longfellow dates to 1886, Maryland Avenue to 1887, Dover to 1889 and Trowbridge to 1894. That puts the first three right in the heart of the buildings built during the tenure of superintendent William Anderson – who was top man at MPS from 1883 until 1892.

Trowbridge is a little fuzzier. While MPS' own history, "Our Roots Grow Deep," says that Trowbridge was built during the Anderson years, an Energy Star document that lists the construction dates of a number of district buildings gives the 1894 date. That, of course, could not be accurate if the building was indeed built during Anderson's time.

Regardless, that means it is not the oldest.

The oldest is 8th Street School, on 8th and Michigan, Downtown. You can look inside and learn more about it here.

Alas, recently I had to break the hearts of a nice group of educators at Brown Street Academy, 2029 N. 20th St., who – thanks to an erroneous pencil marking on original blueprints – had been led to believe their building was constructed in 1882 and was, therefore, the oldest still operating in the district.

Brown Street was opened as Ninth District Primary (and was also called Ninth District No. 2) as early as the 1870s. The first reference I can find to it is that Daniel B. Corcoran was named principal there in 1876. But, here's the catch: it was an earlier building on the same site. 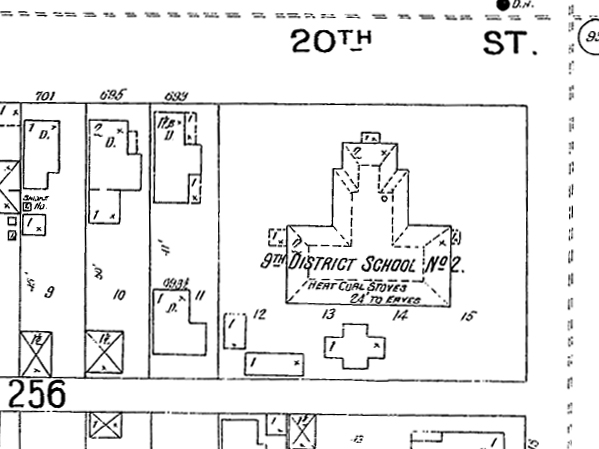 The current building was begun in 1897 and opened on Jan. 3, 1898, a fact that was reported in the Journal of Dec. 30, 1897: "The new Ninth Ward Primary school will be opened Monday next and the children will be transferred from the two stores and the saloon (!!) where they have been taught, to the new structure, thus saving about $50 rent each month."

Evidence in newspapers and other documents confirm this date, despite the fact that one of the original drawings shows this erroneous date, added at some point in pencil. This date has since been repeated as the correct date of construction. 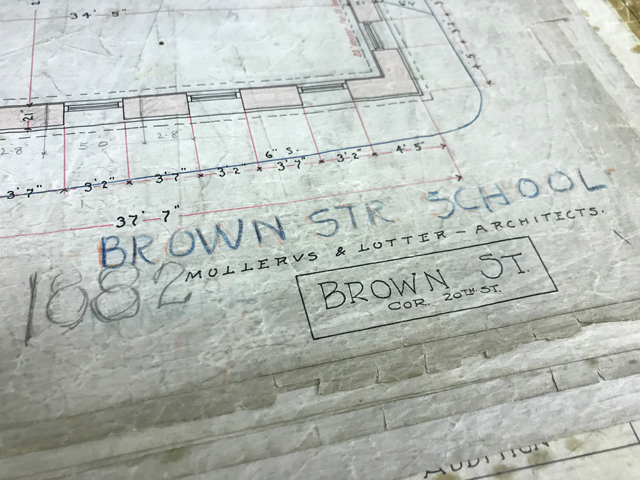 We also know this cannot be the correct date, because we can see from the blueprints above that Mollerus and Lotter were the architects. Henry P. Mollerus began working as a draftsman in 1891 and Henry G. Lotter got his start the same way in 1889. The two became partners in 1896, which means they couldn't possibly have designed this building in 1882.

The current building was renamed Brown Street School in 1912, when many schools were renamed, often after their locations. The street – and therefore the school – are named in honor of west side Milwaukee pioneer Deacon Samuel Brown.

In 1913 it got an addition added on the back of the south end. In the 1950s, a low-slung addition called "the annex" by Brown Streeters was put on to the south, and in 1989, a large addition with a gym, cafeteria and office was added to the north. Afterward, the original third-floor gym in the old building was converted to classrooms.

View it from the south (Brown Street) and you really get a sense for its orderly mass. Then compare it to nearby Siefert (aka Ninth District School No. 1), 1547 N. 14th St., or a school like Maryland Avenue or Golda Meir and you can appreciate how spacious it is in relation to other buildings of the era.

Like the Maryland building, Brown Street has a semi-circular apse. However, while the Maryland example spans two floors, the Brown Street half moon is only one story above ground – though the basement classroom, formerly a music room, has the same shape. The room was likely the kindergarten space, but it is now the school's art room.

The building lacks the adornment of the Henry Koch buildings discussed in previous blogs and looks more solid, like a weightier community structure.

Siefert was named for MPS superintendent Henry O.R. Siefert (1896-1904), who served as the school's principal from 1906 to 1922. It is built on a U-shaped plan, is similarly unadorned, though its central section boasts a lovely row of seven large arched windows on the third floor, giving it a Romanesque feel.

According to the Siefert web site, that building opened in 1903 (again, replacing an older schoolhouse), as Ninth District #1, a K-8 school, noting that the, "student body was composed primarily of students from blue-collar German families. Pancratius Tiefenthaler (there is a Tiefenthaler Park nearby on Cherry Street) was the first administrator, and he served in this capacity for three years."

Also in the neighborhood is the former McKinley School, 2001 W. Vliet St., which was later home to the V.E. Carter Human Resources Center. You can read more about its history here, and look inside here.

The sprawling now-painted brick building opened as Fifteenth District No. 1 and was renamed Cold Spring Avenue in 1912. In 1927 it was named for the 25th president William B. McKinley.

Viewed from above (thank you Google), you can see that it is four attached buildings.

With all its nooks and crannies and wings and dormers, McKinley is a spelunker's dream.

On the other end of the spectrum is the fetching Fifteenth District No. 2, a few blocks away at 1312 N. 27th St.

This wonderful building is in beautiful shape and is a stunner. Built in 1892, it was designed by Walter Holbrook – a one-time partner of Edward Townsend Mix – who also designed Mound Street, Trowbridge and Dover Street Schools in Bay View. Like the other buildings mentioned, it has had a number of additions over the years.

In recent years, the building housed the Urban Waldorf School before reverting to 27th Street School and finally closing a few years ago. When its doors fly open again next year to house the two merged Kilmer schools (one was located on the South Side, the other in the lower level of French Immersion), it will be renamed James Groppi High School.