After public meetings, transit modeling and route analysis, an alignment has been recommended as the East-West Bus Rapid Transit route. Analysis shows that an end to end trip could take as little as 35 minutes, which is more than 30% faster than a bus in mixed traffic.

After months of public meetings, transit modeling and route analysis, an alignment has been recommended as the East-West Bus Rapid Transit route. The 9-mile route, which can be seen here, travels through Downtown Milwaukee, and through the west side of the city on Wisconsin Avenue and Bluemound Road to 95th Street. The route turns north on 95th Street to the Milwaukee Regional Medical Center and ends at the Watertown Plank Road Park-Ride lot.

Analysis shows that a trip from end to end could take as little as 35 minutes, which in comparison is more than 30% faster than a bus traveling in mixed traffic. That time savings really adds up for riders, who could save up to 112 hours a year on their commute.

"The recommended BRT route will help connect people to tens of thousands of jobs in Downtown Milwaukee, the Milwaukee Regional Medical Center and all the areas in between," County Executive Chris Abele said. "Make no mistake, this service is more than just a rapid route from Downtown Milwaukee to Wauwatosa. The route provides high quality transportation to thousands and thousands of people living at or below the poverty line. Faster and more frequent bus service gives riders more access to medical appointments, school, work force training and jobs."

The recommended route includes 19 station locations in each direction that serve as stops. According to the route analysis, within a half mile of the stations there are:

The proposed BRT service has received a wide and diverse level of support from organizations and individuals from across the community, including: ACLU, Vision Forward, Milwaukee Urban League, MMAC, Wisconsin LGBT Chamber of Commerce, WAM DC LLC and many others.

This Summer
The Milwaukee and Wauwatosa Common Councils will be asked to consider the recommended BRT route this month and the Milwaukee County Board is expected to consider the route and local funding in July. If the local legislative bodies support the route, Milwaukee County and MCTS will apply for capital funding through the Federal Transit Administration’s (FTA) Small Starts program in September 2016.

2016-2017
The FTA typically takes a year to evaluate and select which applicant projects will receive capital funding through Small Starts (anticipated announcement in Fall 2017). In the interim, Milwaukee County is requesting FTA permission to begin detailed engineering and environmental clearance work, which is the federally-required project phase known as Project Development (PD). Milwaukee County expects to receive that permission by Fall 2016. In May 2016, the Milwaukee County Board of Supervisors unanimously approved $2.1 million to complete the PD phase; that money can be credited towards Milwaukee County’s capital contribution for the project once the FTA approves entry into PD.

The PD phase is anticipated to occur throughout 2017. Milwaukee County will continue to work with the cities of Milwaukee and Wauwatosa, residents, business owners and other stakeholders to further refine this alignment to include analysis of service plans, station locations and design and where dedicated, bus-only lanes can be located.

2018 - 2019
Once PD is completed, and the project is awarded Small Starts funding, construction can occur during 2018 and 2019. Bus Rapid Transit (BRT) operations are scheduled to commence by the end of 2019. 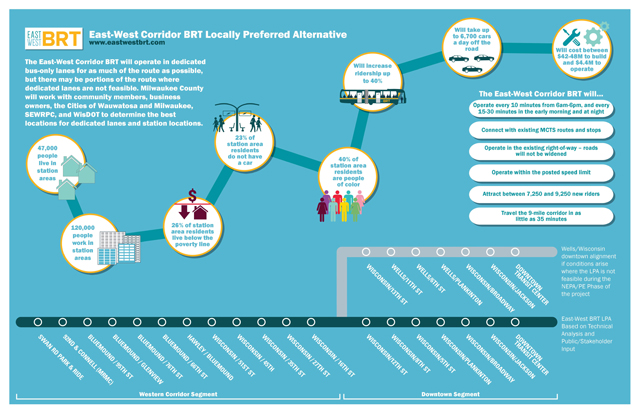 The study team found that the proposed BRT service would also benefit drivers by taking more than 6,700 cars off the road and reducing the amount of miles people drive by up to 17 million miles a year. Fewer cars mean less congestion on local roads, and cleaner air for everyone.

Without the addition of BRT, the analysis shows transit trips in the corridor could take up to 10 minutes longer, buses would become more crowded and less reliable, and the increased car and truck congestion could require the removal of parking spaces to allow for more traffic.

Final cost estimates will depend on the further analysis during Project Development, the stations and route design elements of the bus lanes and buses; early estimates of the project are $42 million to $48 million to build. Federal funds, otherwise not available to the area, are expected to cover 80% of the cost.